It was nearly a hundred degrees in Salt Lake City on Saturday. Organizers with Queer Meals, a nonprofit that provides free meals and groceries in the Provo area, had been waiting for over an hour for a meet and greet with Tim Cook. The openly gay Apple CEO was one of the slated speakers at that evening’s LoveLoud Festival, a benefit concert for LGBTQ Mormon youth.

Bobbee Trans Mooremon, a board member at Queer Meals, asked the group’s handler if she could use the bathroom. All the restrooms at the University of Utah’s Rice-Eccles Stadium were set to be converted into gender-neutral facilities for the July 28 festival, according to LoveLoud organizers.

But when the handler took Mooremon to a men’s restroom, someone using the urinal stopped her. He told her she was in the “wrong” bathroom. When Mooremon — who is transgender — tried to explain about the stadium’s gender-inclusive policy, the man informed her that other facilities in the stadium had been marked as all-gender, but this one was strictly for staff and VIPs.

Mooremon washed her hands and left. She tells INTO the experience felt extremely “dehumanizing” in a space intended to uplift trans people.

When Mooremon reported the incident to Queer Meals Founder Jerilyn Hassell Pool, the group made the decision to pack up their booth and leave the event. After it was revealed that LoveLoud had only marked two bathrooms as gender-neutral, Pool felt it was no longer a “safe space” for Utah’s trans community. Provo Pride and the Provo’s PFLAG chapter pulled out later that day.

While Mooremon’s story has attracted national attention, she is not alone. Over a dozen trans attendees claim they struggled to access the stadium’s restrooms during the event.

QueerMeals surveyed trans volunteers and community members who attended the concert, headlined by the rock band Imagine Dragons. While some had positive experiences overall, 13 respondents told the nonprofit they were made to feel uncomfortable and unwelcome while using the restrooms at LoveLoud; others simply couldn’t find the limited all-gender facilities offered that day.

Some of their stories were shared with INTO under condition of anonymity to protect their identities. They will be referred to using pseudonyms.

At least two attendees report being “stared at” while using the restroom. One individual, Skyler, was reportedly leaving a restroom marked for families and people with disabilities at the time, while Sidney claims the incident took place in the men’s restroom. The former respondent searched the stadium for the gender-neutral facilities and didn’t see any.

“In a place we were supposed to allowed to be ourselves, we couldn’t,” Skyler concludes.

Jordan had similar issues locating the all-gender restrooms. The respondent claims that “while the other bathrooms had large signs visible from a distance, the signs indicating the two gender-neutral bathrooms were tiny.”

“For most of the concert, the indoor sections were full of people sheltering from the heat, which made getting to any bathroom a challenge,” Jordan says.

The tenor of these reports was confirmed in conversation with Chelsea Peahl of Provo Pride’s board of trustees, who claims that several community members had similar experiences at last year’s LoveLoud Festival. Peahl tells INTO that advocacy groups made it “very clear there was a bathroom issue” and their concerns were “ignored.”

When Peahl (who uses gender-neutral pronouns) texted LoveLoud organizers on Saturday to inform them of the limited availability of all-gender bathrooms, they were told organizers would “forward those messages onto individuals at hand.”

“Nothing happened,” Peahl claims in a phone conversation. “Then Bobbee’s situation happened and other individuals were bullied in the restroom. Someone told me about it because he had witnessed a man harassing individuals in the restroom. I have heard from a few people those situations happened.”

“I let them know this was a problem before they started letting ticket holders in,” Peahl adds.

Even for those who were able to use the restroom without incident, LGBTQ groups say having just two all-gender bathrooms on opposite ends of a stadium designed to hold 45,000 people created major challenges for both trans attendees and individuals with disabilities. 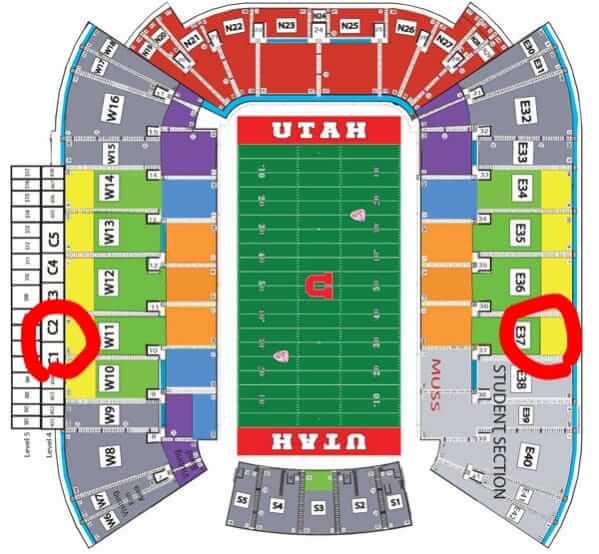 For instance, Mooremon would have to travel several floors up to use one of the two gender-neutral facilities. She uses a walker. Even the men’s bathroom she was asked to leave wasn’t ADA accessible — meaning she had to park her walker outside.

Throughout the event, Mooremon felt as if her experience was being “pushed to the back.”

Others agreed. Although trans model Carmen Carrera discussed her journey to self-acceptance in a livestream with Imagine Dragons frontman Dan Reynolds, many felt the framing of the event focused explicitly on sending a message of inspiration to gay, lesbian, and bisexual young people.

Suicide is the leading cause of death in Utah among those between the ages of 12 and 17, and many cite homophobia in the LDS Church as a contributing factor. Reynolds starred in an HBO documentary, Believer, earlier this year about the singer’s campaign to further acceptance in his faith. The LoveLoud concert was started with that goal in mind, with its mission to raise $1 million for queer youth in 2018.

But critics note that even the event’s name — LoveLoud — puts an emphasis on sexual orientation, not gender identity.

What makes these issues so disappointing is trans people claim they already have so few spaces accessible to them in the LDS faith. Although the Book of Mormon doesn’t explicitly mention transgender issues in its text, leaders have interpreted doctrine so that trans individuals face excommunication from the church if they begin the process of surgically or medically transitioning.

“The way [Mormon leaders] phrase it is ‘elective transsexual operations,’ which is nebulous at best,” Cluck says. “There’s not much to go on.”

Groups like QueerMeals and Provo Pride will be meeting with Reynolds and LoveLoud organizers in the coming weeks for round table discussions on how to uphold the concert’s mission of inclusion in future years. Reynolds is expected to be present for those conversations.

Ahead of those meetings, LoveLoud has encouraged community members to share any negative experiences they had at the event — saying in a statement that organizers are “saddened” by Mooremon’s account.

Mooremon believes, though, that this year’s controversy is already starting important conversations in the Mormon faith.

“It’s already creating a conversation around access to bathrooms for trans-identified people, and I think that is really important,” she says. “People’s eyes are being opened by this, and I’m hoping that it can raise awareness. Trans people need to pee just like everybody else.”