Advocates are calling it the worst anti-trans measure in the country and eying it as a bellwether for trans rights across the nation. It’s the first ballot measure that aims to remove existing transgender protections.

Proposition 1, up for a vote in Anchorage, Alaska, forces trans people to use the bathroom according to their original birth certificate.

“That means that even if someone has been living for years according to their gender identity and has been using the restroom matching their gender for as long they rememberand even if they’ve gotten their birth certificate updatedthey have to revert back to using the gender that was listed on their original birth certificate,” says Jay Wu, communications manager at the National Center for Transgender Equality.

That goes a step further than North Carolina’s infamous HB 2, which cost the state major sporting events and concerts before it was largely repealed last March. That law deferred to birth certificates, but not “original” certificates, so some trans people could have their gender markers updated. Prop. 1 in Anchorage removes that option altogether.

Anchorage will vote by mail from March 12 through April 3, just three years lawmakers there passed an LGBTQ anti-discrimination law. Prop. 1 seeks to unravel the law’s protections for transgender people.

Most significantly, it states that people using bathrooms and locker rooms have a right to “privacy that must be protected,” including in states of undress by members of “the opposite sex.”

“Sex means an individual’s immutable biological condition of being male or female, as objectively determined by anatomy and genetics at the time of birth,” Prop. 1 states.

It goes on to say that a person’s original birth certificate can be used as proof of sex.

“It means that many transgender people simply won’t be able to use the restroom, and for many people not having safe access to the restroom means you can’t go to school, go to work or participate in public life,” says Wu. 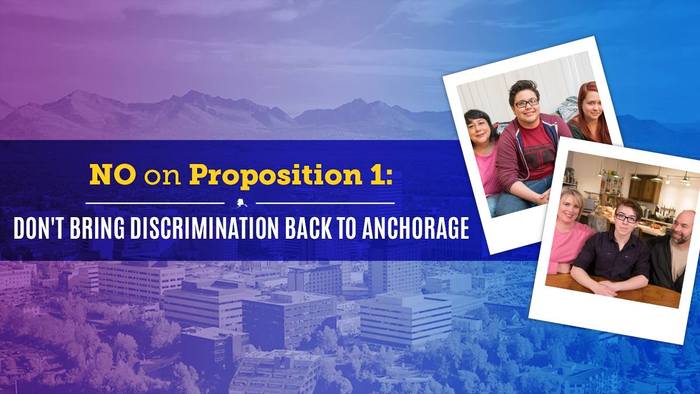 For people like David Lockard, a vote in favor of Prop. 1 would be excruciating. Lockard’s son Col transitioned four years ago. He attends Anchorage’s East High School where his identity has been embraced.

“We got a wonderful response from his counselor and principal and they basically handed us the school district policy protecting transgender students and staff,” he says. “They told us that he could use any bathroom that he wanted and that there were other transgender students at the school and that they they didn’t think he would have any problems, but that if he did, they would help him. So we had a wonderful experience. I’m afraid that would change if Prop. 1 passed.”

Anchorage’s schools have been toutedas some of the most diverse in the country. But the city owns East High, Lockard, points out. He worries that voters will force the school to discriminate.

Under Prop. 1, students like Col are written out of existence. Regardless of how they present, identify or what their updated documents say, the measure reverts to original birth certificate. Under Prop. 1, transgender high school girls could be forced into boys’ locker rooms.

The measure has been roundly criticized in local newspapers. In an op-ed in the Anchorage Daily News, former Republican Alaskan Senator Arliss Sturgulewski called the measure “one of the most divisive, harmful initiatives I’ve seen on the ballot in our beloved city.”

“The language we use matters, and the language I have heard from proponents of Proposition 1 inflicts real harm on our community members,” she writes. “Proposition 1 backers have promoted ugly messages that promote fear and stereotypes, mischaracterize the non-discrimination law, and scapegoat transgender individuals.”

The Anchorage Chamber of Commerce has also thrown its weight into defeating Prop. 1.

Its champion is Alaska Family Council President Jim Minnery, whose anti-LGBTQviews have been as condemned at least since 2012 when an LGBTQ rights ballot measure failed. Minnery did not respond to a request for comment.

“Last year alone GLAAD recorded more than 50 explicit anti-LGBTQ attacks by the Trump Administration, many of which were aimed at harming transgender people,” Stokes says in an email to INTO. “Meanwhile, we tracked over 120 anti-LGBTQ bills across 30 states.”

But LGBTQ advocates and opponents are eying Alaska as a barometer for the nation. It’s the first ever ballot measure that aims to repeal existing trans protections. It’s fate could be crucial not just for Anchorage but for a spate of other states facing anti-trans initiatives across the county.