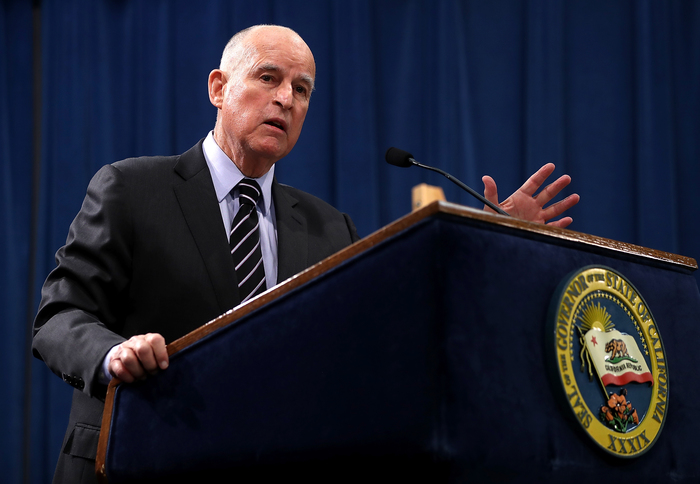 California passed a groundbreaking law on Sunday providing a pathway for transgender prisoners to change their legal name.

Authored by Sen. Toni Atkins, Senate Bill 310 (also known as the “Name and Dignity Act”) nixes the requirement that prison officials give permission to trans people applying to update their documents to match their gender identity and chosen name. These barriers mean that few name changes are ever approved for trans inmates. Only four prisoners have successfully completed the process since 1984.

Gov. Jerry Brown’s office declined to comment, preferring to “let the governor’s signature of this legislation speak for itself.” Brown was widely expected to sign the bill.

“This law is a welcome step toward addressing the severe discrimination transgender people face in prison and upon release from prison,” said Kris Hayashi, executive director of Transgender Law Center in a press release.

“For too long, California prisons and jails have denied the humanity and dignity of transgender people in their custody by refusing to recognize who they truly are,” he added.

“A person exiting prison with identification documents that actually match who they are has an exponential impact on their ability to access life-giving services without some of the discrimination that comes with having identification documents that don’t match their gender presentation,” said Janetta Johnson, executive director of the TGI Justice Project, in a statement.

Johnson notes that transgender people face undue bias in housing, healthcare, and employment, which can lead to a heightened risk of recidivism.

Although there isn’t substantive data on trans reincarceration rates, the numbers are already extremely high for the general population. A 2011 survey from the Pew Center found that 43 percent of inmates released from prison will wind up behind bars again in the next three months.

SB 310 hopes to ease that burden, but advocates note that the legislation is cannily timed.

The Transgender Law Center states that the Trump administration has continued to “chip away at gains around transgender people’s rights” in recent weeks.

Attorney General Jeff Sessions rolled back federal protections for trans workers earlier this month, which could allow transgender people to be fired on the basis of their gender identity. Prior to the announcement of that decision, President Trump announced that trans troops would no longer be able to serve openly in the military, reversing a year-old policy.

California Gov. Jerry Brown could sign a bill this week that makes it easier for transgender inmates to apply for a legal name change.

Authored by Sen. Toni Atkins (D-San Diego), the Name and Dignity Act for Incarcerated Trans Peoplealso known as State Bill 310waves the requirement that prison officials give permission for prisoners to apply for a name change. The legislation would, if passed, additionally mandate that wardens and prison guards refer to trans inmates by their chosen name, not the one they were assigned at birth.

The inmate’s birth name, though, would still be listed in paperwork as an “alias.”

“Everyone deserves unimpeded access to our courts, whether or not they are incarcerated,” said Sen. Atkins in a Wednesday press release. “SB 310 will give those serving time in our prisons the same opportunity that everyone else has to legally change their name or gender and be who they are. I believe this will improve their chances for success after release, and I’m grateful that my colleagues see it the same way.”

LGBTQ rights groups championed the legislation as a step forward in ensuring that trans prisoners are treated with respect and humanity.

“Names are one of the simplest and most visible aspects of our identities, and the legal system has long recognized people’s right to self-determine their name,” Arli Christian, State Policy Counsel for the National Center for Transgender Equality (NCTE), told INTO. “This bill takes important steps to make legal name changes more accessible while incarcerated, alleviating one source of discrimination and harassment faced by incarcerated and formerly incarcerated transgender people.”

“NCTE encourages other states to take similar steps to ensure access to legal name changes for all,” he continued.

Although transgender people are imprisoned at disproportionate rates, California’s bill is the first in the nation of its kind. A 2015 report from NCTE estimated that one in six trans people had been incarcerated at some point in their lives. But just one trans person in California has ever successfully applied for a name change while behind bars.

Rick Zbur, executive director of Equality California, believes that making sure other trans people have access to the legal resources they need has the power to change lives.

“By streamlining the process for name and gender changes, SB 310 helps to minimize abuses and to ensure that transgender inmates will be treated with dignity,” Zbur said in a press release. “That, in turn, will help them to begin their successful reentry into society as their full, authentic selves.”

Sponsors have claimed that the bill will reduce recidivism by ensuring trans people have documents that match their gender identity. Trans people whose identification doesn’t match their outward appearance frequently face discrimination when applying for a job. In a 2011 survey from NCTE, 44 percent of transgender respondents claim that they were turned down for a position because of their gender identity.

SB 310, which would apply to both state prisons and county lockups, has been endorsed by groups like the Transgender Law Center, the Women’s Policy Institute, and the Women’s Foundation of California.

This is just the latest bill in 2017 designed to address the needs of California’s trans population. The state’s Senate gave its thumbs up in June to State Bill 179, which would allow for a third option on California drivers’ licenses. Like legislation in Oregon and D.C., SB 179 recognizes the identity of those who fall outside the gender binary of male and female. That bill is currently being debated.

The prison name change bill is headed to the governor’s desk, where it is likely to be approved.