Harvey, who is president of the anti-LGBTQ advocacy group Mission America, sat down for an interview with fellow right-wing zealot Peter LaBarbera for an episode of her radio show. She asked LaBarbera, the man behind Americans for Truth About Homosexuality, how religious conservatives can “re-horrify people” about the LGBTQ community.

“How do we re-horrify people about the sin of homosexuality?” she inquired in a December broadcast, as previously reported by Right Wing Watch. “People are becoming so comfortable with this, even people on our side. We need to re-horrify them.” 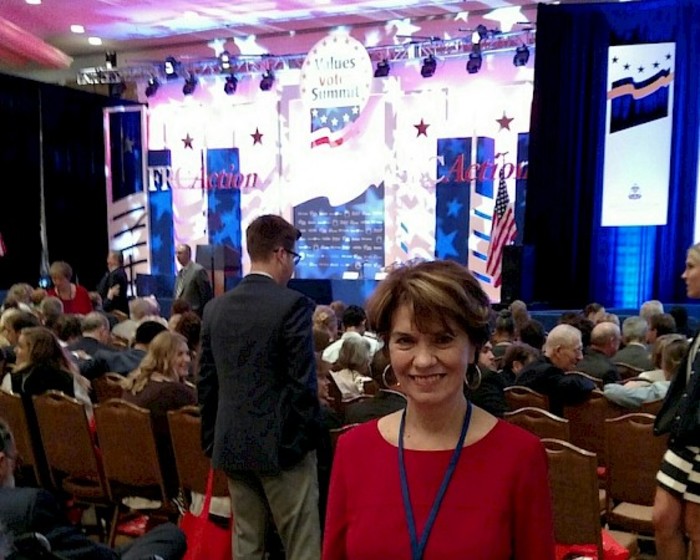 Harvey also claimed that Queer-Straight Alliances in middle and high schools are fronts for “predators” to indoctrinate youth.

“I believe that the homosexual clubs in schools are just red flags for predators,” she continued. “I think that they exist there as an audience to continue to fast track kids into the lifestyle, network with adultsI mean, who knows what goes on there?”

Based in Columbus, Ohio, Mission America is one of the most outlandishly extreme groups among the religious right.

The group’s website claims opposing homosexuality is its “central focus,” referring to LGBTQ identity as a “chic cause celebre,” “tragic behavior,” and “evil.” In addition to blaming gay people for abortion, it calls the queer and trans community “the torch-carriers for a movement to destroy biblically-oriented Christianity and its positive influence on our culture.”

“Homosexuality will eventually be seen for the lie it is,” the group claims, “a lie against all that God created a person to be; a lie about how people are best to love and relate to one another; a lie of omission about the health hazards involved, the sinful origins of homosexual desire and the real possibility of change.”

Harvey herself has said that homosexuality is a “delusion,” compared LGBTQ people to Nazis, blamed queer activism for suicide among youth, and claimed the annual Day of Silence dishonors God.