In yet another LGBTQ-erasing move, the Department of Health and Human Services has officially removed any mention of lesbian or bisexual women from its Women’s Health website.

The Sunlight Foundation’s Web Integrity Project found that womenshealth.gov, which used have a section devoted to lesbian and bisexual health, has since removed any such information. The site is maintained by the Department of Health and Human Services’ Office on Women’s Health, which “coordinates women’s health efforts across HHS and addresses critical women’s health issues by informing and advancing policies, educating health care professionals and consumers, and supporting model programs.”

Going to the URL where this page used to live reveals a 404 error page, but a Wayback archive from April 2017 provides a look at the information that used to be included. 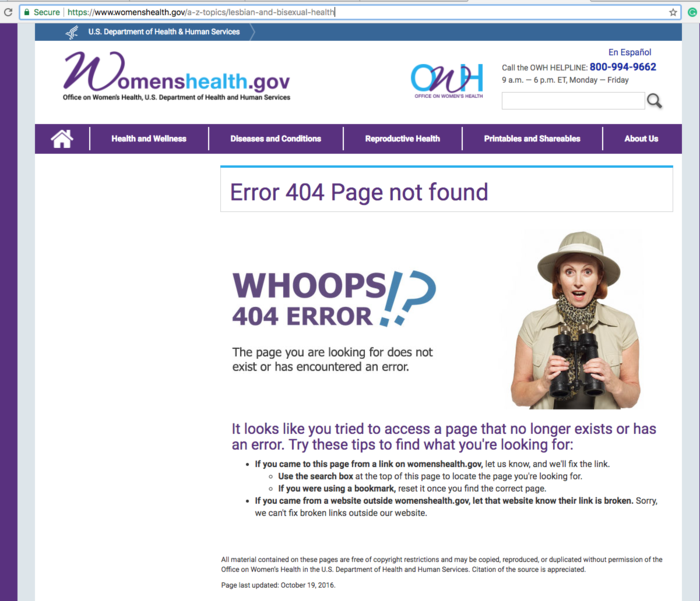 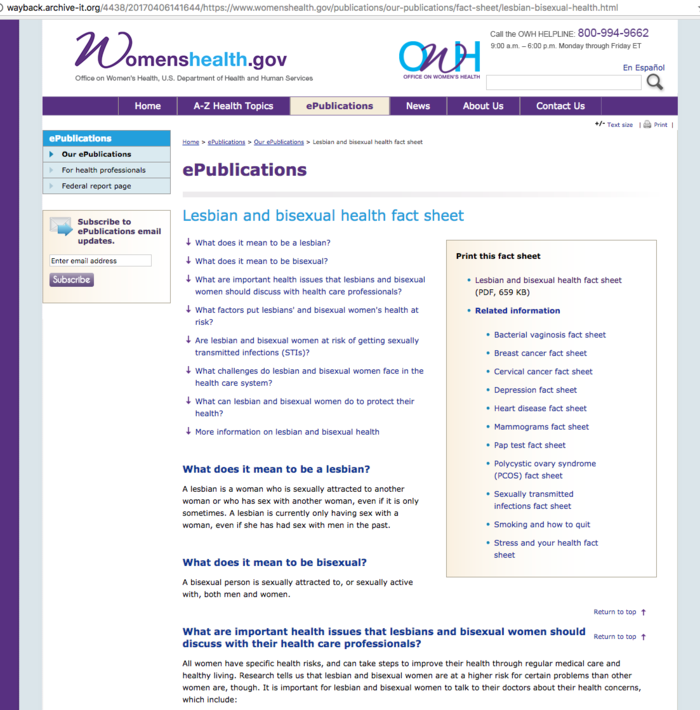 An HHS spokesperson told Politico that the pages were removed “as part of a routine update,”and that “the outdated lesbian and bisexual health pages were removed and the health content was integrated into the relevant health topics pages across the website.”

Per the Wayback archive, the information was last updated in 2012 and was reviewed by Susan Cochran, Ph.D., M.S.Professor of Epidemiology at the UCLA School of Public Health. Cochran’s research and publications include “Drug Use, Drug Severity and Help-seeking Behaviors of Lesbian and Bisexual Women,” Journal of Women’s Health 2006; “Alcohol and Tobacco Use Patterns Among Heterosexually and Homosexually Experienced California Women,” Drug and Alcohol Dependence 2005; “Prevalence of Non-Medical Drug Use and Dependence Among Homosexually Active Men and Women In The US Population,” Addiction 2004; and “Correlates of Overweight and Obesity Among Lesbian and Bisexual Women” in 2003. INTO has reached out to her for comment and will update this article should she respond.

It appears that despite the proposed reason for the removal of the page and subsequent lesbian and bi-focused information, there is zero integration of lesbian, bi, trans or otherwise queer inclusion anywhere else on the site.

“The removal of lesbian and bisexual health materials in particular, without advance notice and in a targeted way, raise concerns that they’ve targeted information for vulnerable populations,” says The Sunlight Foundation’s Andrew Bergman told Politico.

Politico also pointed out that Suzanne Haynes, the senior science adviser at HHS who is also the former president of the Lesbian Health Fund and who oversaw the office’s LGBT health research, retired in December. The Women’s Health site is managed by communications firm Hager Sharp, who said that the HHS determines all content.

Earlier this year, the White House removed its official LGBT page, as well as the page dedicated to climate change. These governmental attempts to erase LGBTQ people from official websites are being monitored by organizations like the Sunlight Foundation, whose “missionis to monitor changes to government websites, holding our government accountable by revealing shifts in public information and access toWebresources, as well as changes in stated policies and priorities.”