LGBTQ people may be facing the fight of a lifetime in this political climate, but they have money in the bank.

Donations to LGBTQ organizations are on the rise. That’s according to a report released by the Movement Advancement Project (MAP) Tuesday.

“Despite changing priorities and shifting political landscape, we see a very well-resourced and stable movement,” says Alex Sheldon, a data and policy research associate at MAP.

MAP reports that donations to LGBTQ organizations have increased over the past five years. That may come as a surprise to some who worried that the passage of marriage equality in 2015 would lead to complacency. Those numbers also reflect giving before President Donald Trump was elected in 2016.

Across 39 national LGBTQ organizations MAP tracked from 2012-2016, groups saw a 26 percent increase in funding. From 2015 to 2016 alone, they reported an 11 percent funding increase. Donations from individuals jumped by a staggering 16 percent.

Those numbers do not include the past year when attacks on LGBTQ rights may have fueled additional giving.

“Overall, it just reflects an increase in investment in LGBT equality over the last five years,” Sheldon says.

Lyle Matthew Kan, Director of Research and Communications at Funders for LGBTQ issues, tells INTO that while it’s too early to tally 2016-2017, it’s clear that giving is on the rise.

For 2016, he said, “a large part of that is going to be in response to the Pulse Nightclub massacre.There was a lot of giving from LGBTQ corportations.”

Specifically, they gave to assist victims and their families in the wake of the Orlando LGBTQ nightclub shooting that left 49 dead.

And while some might assume that winning marriage equality left funders complacent, Kan said, it may have had the reverse effect. Some foundations and corporations were hesitant to funnel money into the marriage equality movement, Kan noted, because it was a politicized issue.

Now, he says, “There is an opening for some of these foundations to get involved” Corporations and foundations increasingly invest in issues like LGBTQ poverty, homelessness and health.

Donations have not been limited to LGBTQ organizations either. Increasingly, foundations, corporations, and individuals give money to advocacy organizations that are not explicitly LGBTQ to fight for LGBTQ equality, such as the American Civil Liberties Union. According to Funders for LGBTQ issues, 36 percent of LGBTQ donations went to non-LGBTQ issues in 2015.

Network for Good, a nonprofit fundraising software company, analyzed data from their 125,000 nonprofits over 2016 and 2017. Of the organizations included, 229 that were LGBTQ-related saw dramatic increases in funding in 2017. Whereas in 2016, the groups reported less than $4,000 dollars in donations in January, LGBTQ groups tripled their intake in January 2017, the same month that President Trump took office.

In April of 2016, LGBTQ groups reported $5,000 in donations. In April 2017, that jumped above $20,000, “perhaps in response to Day of Silence,” notes Network for Good’s Vice President of Digital Marketing Lisa Bonanno.

Still, Network for Good’s data may suggest that LGBTQ organizations are trailing other advocacy groups. With the exception of November 2017, fundraising across the other 125,000 nonprofits critically outpaces LGBTQ groups. 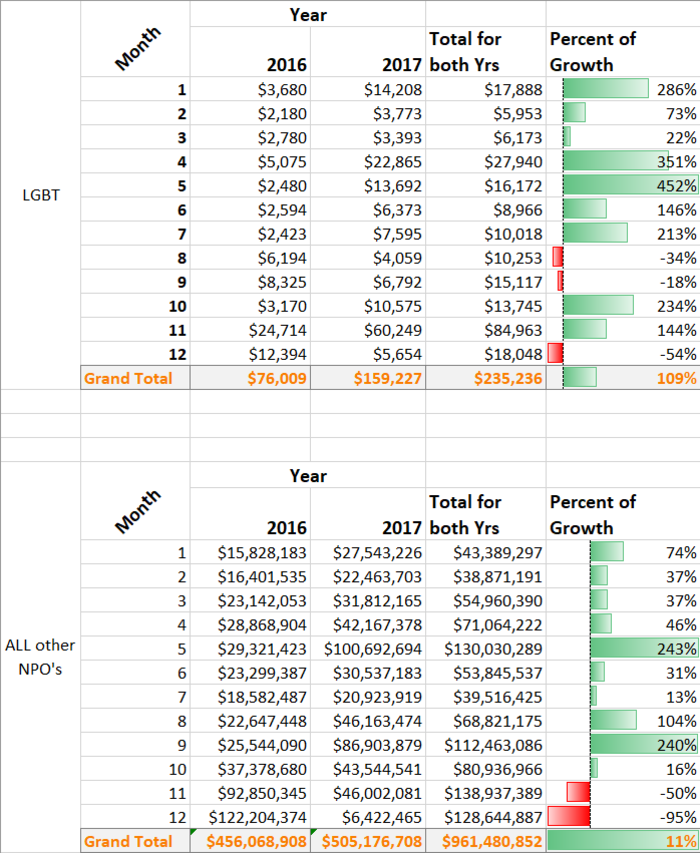 “We cannot speak to the size of each of the 229 organizations in our sample,” Bonanno says, “but rather how the sample compares to the overall data on the Network for Good platform.”

And while LGBTQ organizations brought in far fewer donations than the overall sample, they saw an increase in giving over the last year at a far higher rate than the others. From January 2016 to 2017, the LGBTQ organizations tracked increased giving by 286 percent, with the overall sample seeing only an increase of 74 percent. In May, LGBTQ groups saw a 452 percent compared to a 243 percent increase overall.

Fundraising numbers for 2017 are likely to reflect strategic thinking from LGBTQ groups, Sheldon says, and the trend puts them further in the black.

“What I can say anecdotally,” she says, “is that many organizations use the election and the coordinated attacks on LGBT people as a call to action.”