They didn’t know it at the time, but the night they lit candles and released balloons for Antash’a English, another trans woman was being shot four miles away in Jacksonville.

Chloe Kensington looked at her friend’s face on a T-shirt. She felt raw. Antash’a was full of life. Now, they were praying for her at Sidney J. Gefen Riverway Park. She would be remembered as the second trans homicide victim of five in Florida this year.

“It was heartbreaking,” Kensington recalled. “We felt robbed.”

It’s hard not to notice that many anti-LGBTQ crimes this year have been reported in the Sunshine State.

It’s not just that five transgender women have been gunned down and another shot in the state. In July, Jessie Sumlar, a femme-presenting gay man who did drag, was murdered in Jacksonville.

In April, Leon Frazier, a gay man living in the southeast corner of Florida, was stabbed to death, allegedly by his roommate who feared he was making sexual advances toward him. Days earlier and 20 miles away, four men beat a gay couple at Miami Beach Pride while reportedly yelling anti-gay slurs.

Alecia Abel, who is early in her gender transition, now keeps a gun at her front door and one at her bedside at her Newberry home.

“I’m starting to feel less and less safe in this area,” Abel said. “I’m getting heckled here and there. If I go to Lowe’s, it’s rare that I can step out of there without having someone snicker or mutter under their breath or something. I was not expecting that it was all going to be rainbows and puppy farts the whole time, but I guess I wasn’t prepared for just how bad it could be.”

One morning last week, Abel opened her front door to find a post-it note. “Move or die,” it read. She tore it up and threw it away. Maybe she wouldn’t tell her wife, Liz, she thought, but she ultimately did.

At 2:30 a.m. the next morning, the sheriff’s deputy knocked on her door. Abel had been sitting at the fire pit out back, texting friends. In that time, someone had tagged her garage door. 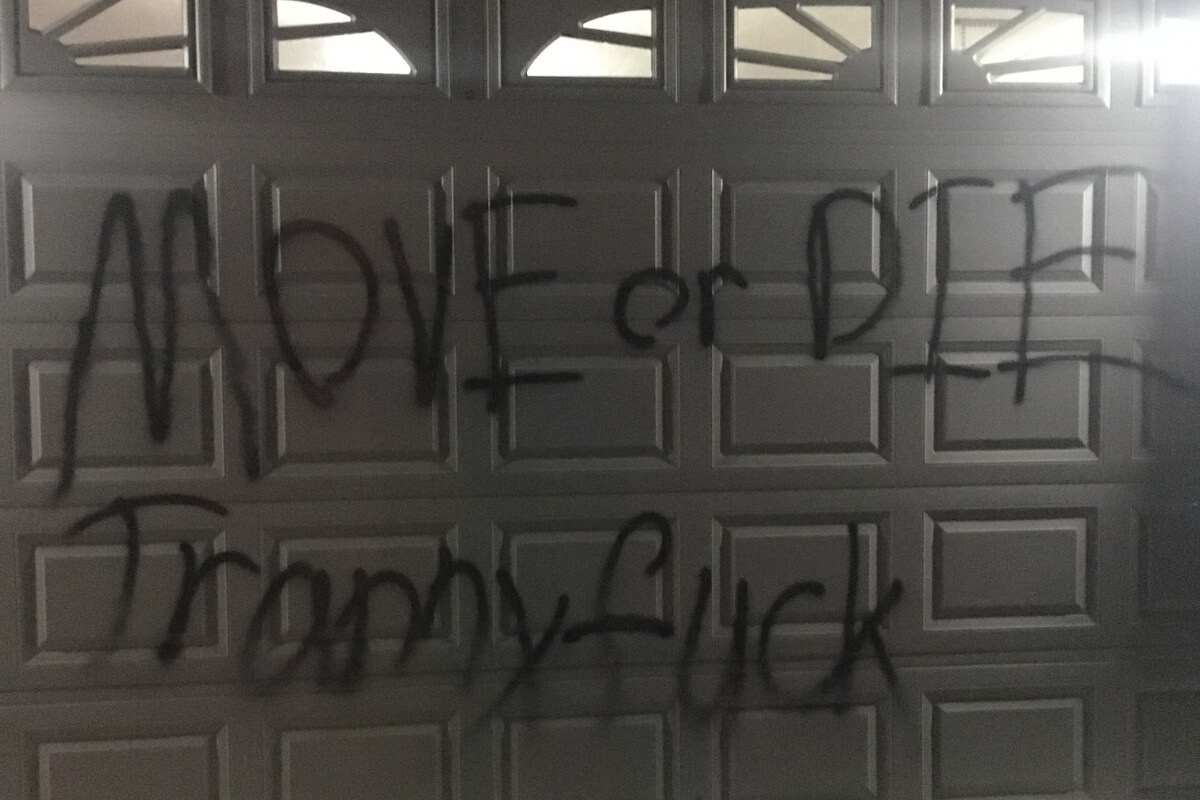 The Southern Poverty Law Center (SPLC), which tracks hate groups across the nation, reports that there are 66 hate groups in Florida, the second highest number of any state (California has 75). But Heidi Beirich, intelligence project director at SPLC, said those numbers should be taken with a grain of salt. States with higher populations tend to have more hate groups.

“That said, there have always been lots of skinheads in Central Florida,” said Beirich. “The biggest hate forum in the United States is out of West Palm Beach, this site called StormFront, and the panhandle regions running all the way over to Jacksonville is a hotbed of a group called League of the South, a neo-confederate organization. There are a number of hate groups in the region.”

SPLC has not seen a particular uptick in hate groups in Florida.

“We’ve been recording, especially since the [2016 Presidential] election, an uptick in the recorded number of hate crimes across the country, without a doubt,” said Beirich. Last year, the Center for the Study of Hate and Extremism reported a 12.5 percent increase in hate crimes in major cities.

Quantifying that rise, however is tricky. Official totals reported by government agencies vary widely. The FBI reported 6,121 hate crimes nationally last year, while the Department of Justice has stated there are approximately 250,000 hate crimes a year.

“We don’t really know what’s going on in terms of hate crimes,” said Beirich. “We just don’t collect the data to make judgements. Sometimes when see a particular spike in hate crimes in a particular place— is that because law enforcement is paying more attention? Is it because reporters are paying more attention? You know for a fact you’re only getting a tiny sliver of the real picture.”

The picture that Kensington has is one of a community in need. After residents held English’s vigil at inCahoots nightclub, they got word that another trans woman had been shot just miles away. She survived. But weeks later, Cathalina Christina James, a fourth trans woman, would be gunned down.

Kensington co-founded an advocacy organization in the wake of English’s death. The Stiletto Sisters now advocates against the violence and works to support victims.

“So pain turned into purpose,” said Kensington. “It mattered to me to keep [Antash’a’s] name alive.”

Abel, too is finding community in the adversity. It’s a strange thing to admit, but being the victim of a hate crime has affirmed the people around her. Her neighbors and friends have rushed to support her. Her unsteady steps toward transition feel more sure. She didn’t want money, but neighbors insisted she launch a GoFundMe so they could support her transition.

“I felt a little intimidated and unsafe before this happened,” said Abel. “If anything, I feel safer now, knowing just how many people are supportive in this community and how the vocal ones up until this point were really a minority and a really small minority.”