On Friday evening, loved ones gathered at the rainbow crosswalks outside the West Hollywood sheriff’s station to demand justice for Gemmel Moore, the young black gay man who wasfound deadin the home of Democratic donor and political activist Ed Buck on July 27.

“This shouldn’t have happened,” LaTisha Nixon, Moore’s mother, told reporters asfamily members, clergy, politicians and activists gathered around her. “He called out to so many people. We all failed him. I just hope that the sheriff’s department does not fail my son.”

Moore’s godfather, Marcus Wilson-Smith, told INTO in an interview that he felt that that the investigation into Moore’s death was “botched.”

“The case was open and shut so quickly,” Wilson-Smith said. “I’ve never seen an autopsy report be completed so fast.”

Several of the people who spoke pointed out that, while the sheriff’s department has begun an official investigation into Moore’s death, the department did not pursue the case until 21 days after Moore was found dead in Buck’s home.

Earlier in August, Nixon told the WeHoTimes that Moore was a sex worker and that Ed Buck was his client. Through a friend who Buck also patroned, Nixon alleged, “[Buck] would have my son to go out to Santa Monica Boulevard looking for young gay black guys so he could inject them with drugs, see their reaction and how [they] would react and take pictures of them.”

According to Jasmyne Cannick, a writer and commentator who spoke at the vigil and has been writing frequently about Gemmel’s death on her website, the sheriff’s department is discouraging others who had similar experiences to Moore’s from coming forward by not offering them immunity. Without immunity, a person who comes forward puts themselves at risk of arrest or imprisonment for any illegal activity they may describe to police even if they’re helping police in an investigation.

“We want Ed Buck’s victims to be treated as victims,” Cannick said at the vigil. Cannick said several people she spoke with have similar stories to Moore’s and have pictures inside the same house with the same furniture.

One speaker, gay Los Angeles councilmember Mike Bonin affirmed his support for Moore’s mother and said that Moore’s death “will not go uninvestigated.” Bonin promised to call the sheriff and the district attorney’s office.

“The life of a young black gay man is just as important as the life of a straight blonde girl,” Bonin said. “Gemmel Moore’s life mattered. Black lives matter.”

Melinah Abdullah an organizer with Black Lives Matter spoke to the crowd and expressed sympathy to Moore’s mother. 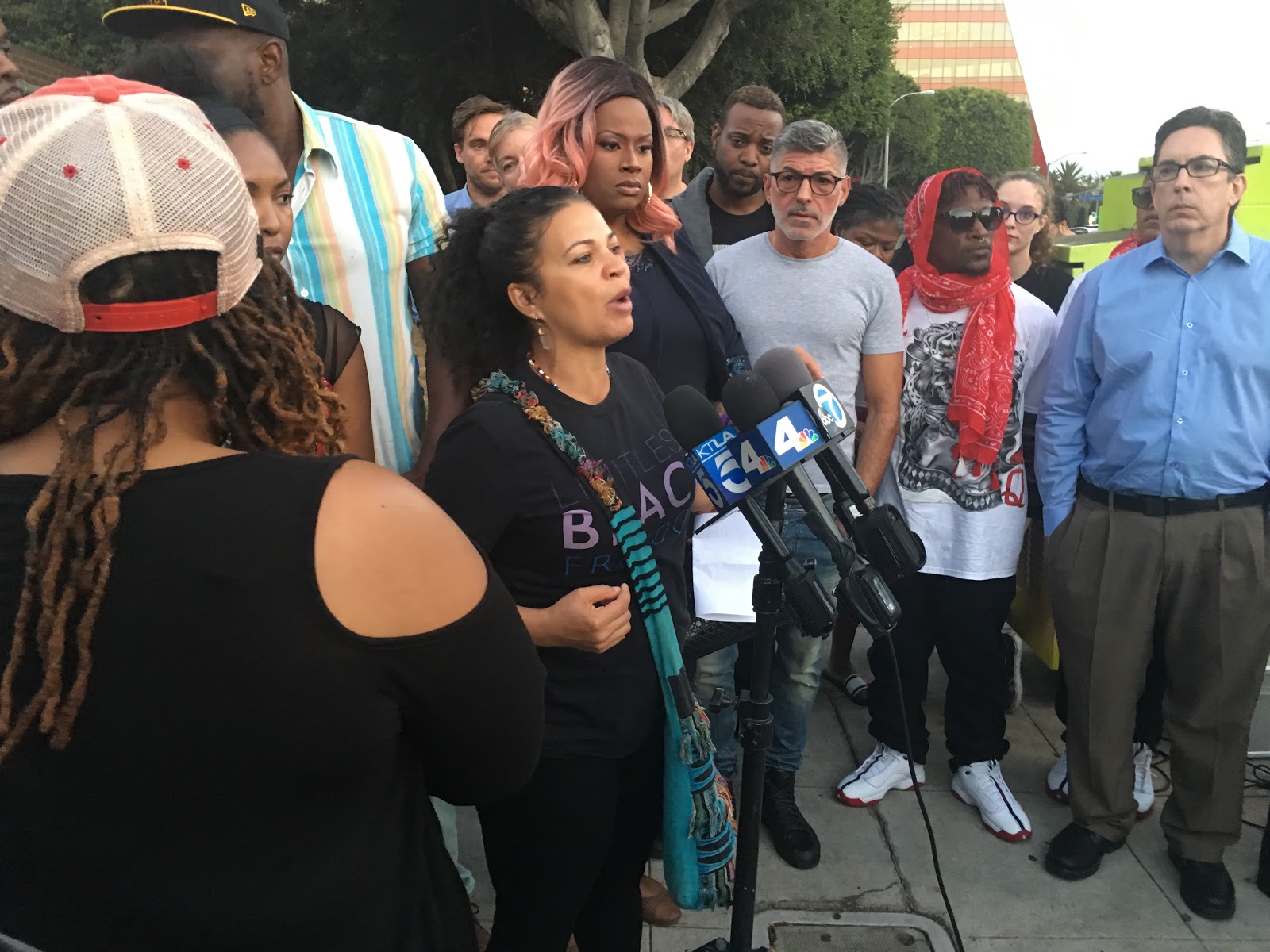 “What we’re experiencing right now is white supremacy and we have to disrupt that,” Abdullah said.

Earlier in August, Cannick published pages from Moore’s journal on her website. The diary entries chronicled Moore’s first time with crystal meth, which he claims Ed Buck introduced him to and supplied for him. In one entry, Moore says he hopes the “end result” of his drug use isn’t death.

“If it didn’t hurt so bad, I’d kill myself but I’ll let Ed Buck do it for now,” one entry reads.

Cannick carried pages of the journal with her at the vigil, but chose not to read them to the crowd because of the intense imagery.

“It’s almost like he foresaw his own death,” Cannick said. 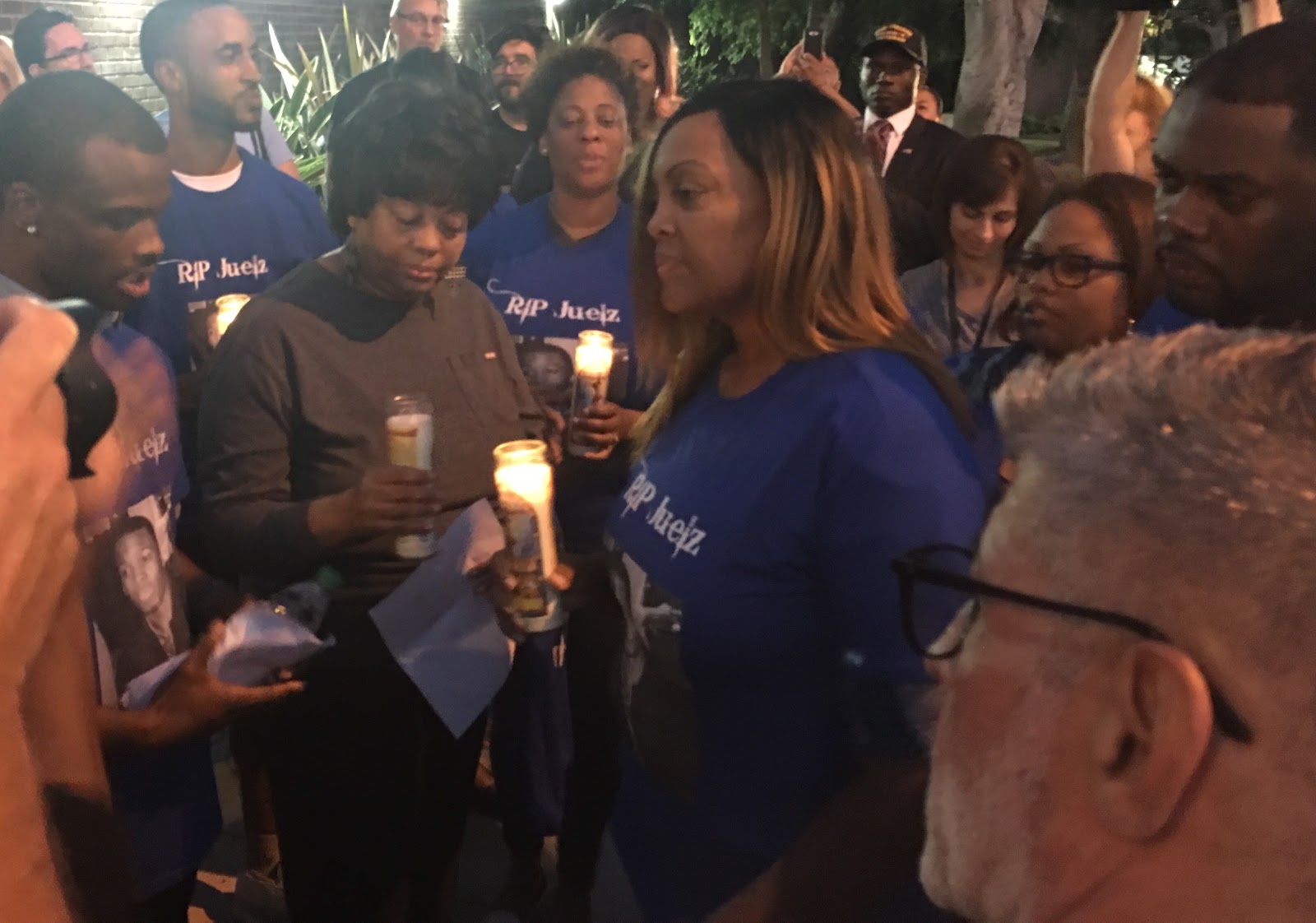 As the vigil ended, supporters dressed themselves in memorial t-shirts with Moore’s face on them and lit candles. They began to sing “This Little Light of Mine” as the sun set over West Hollywood.

Several present at the vigil hoped that, in searching for justice for Gemmel, other young black men who have been similarly exploited may have a voice, as well.

“We need to get justice for him and everyone else,” Wilson-Smith said.

At the close of her address, Moore’s mom said that, aside from helping Moore, “We can save other gay black young men.”