The 64-year-old Virginian, who grew up with the Ku Klux Klan as a fixture of Southern life, tells INTO that the scene in Charlottesville on Aug. 12 looked eerily familiar: white men in polo shirts carrying identical pitchforks to defend the legacy of racism. The protesters were gathered in the small Virginia town for a “Unite the Right” rally, lobbying against the removal of a statue of Robert E. Lee from a public park.

“To me, it was like watching a movie from the old days,” Harrison says in a phone interview. “But it wasn’t a movie. It actually happenedand it happened now.”

Three people were killed as a result of a violent clash between the “alt-right,” the nickname for a loosely connected array of white supremacist groups, and anti-racist counter-protesters. That violence shocked America and left local communities struggling to grapple with the aftermath. When Charlottesville’s newspaper ran a front page photograph of a car plowing through a crowd of people, Harrison says the image cut through the town like a knife.

“This happened in our homes,” he explains. “That’s what it feels like.”

But in the wake of unthinkable tragedy, local LGBTQ communities have stepped up. Advocacy organizations and community members have been on the front lines, offering their support to the victims in Charlottesville at a time when they need it most.

Harrison is the president and executive director of Diversity Richmond, the city’s local LGBTQ group. After Charlottesville, the organization decided to send a message condemning hate: “We Are All Born To Love.” Three years ago, that message was emblazoned on a billboard along Interstate 95 as a response to a local anti-LGBTQ campaign that caused a stir in the town. A “pro-family” group put up their own billboard reading: “No One Is Born Gay.”

Diversity Richmond struck a deal with the Lamar Advertising Company, who operates outdoor billboards across the United States. When the company has inventory that it does not sell, Harrison’s group is allowed to use it for free.

With that partnership in place, Harrison thought it was time to bring the old billboard back.

“Injustice is injustice,” Harrison says. “For those of us in the LGBTQ community, we can identify with discrimination and mistreatment because a lot of us have lived it. We have all been to Charlottesville many, many times. We all have friends and family who live therejust about everybody does. It’s still an issue that’s in all of our minds.’ 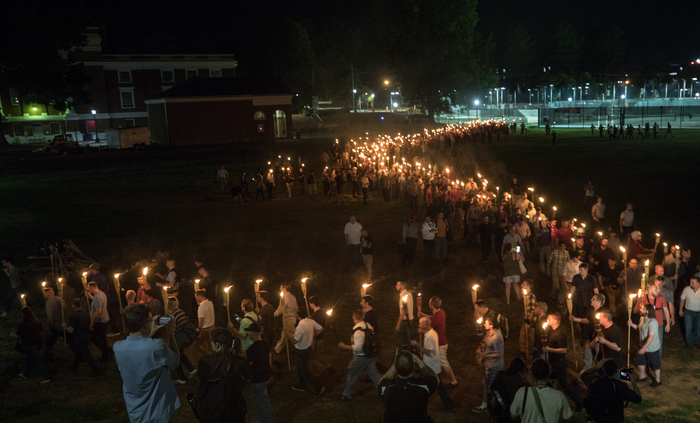 The billboard’s return is well-timed. Charlottesville, which is about 70 miles away from Richmond, is gearing up for its yearly Pride festival on September 16, one which has taken on a more subdued, solemn tone. Amy Marshall, president of Charlottesville Pride Community Network, says that organizers have been focused on the event being “a place of celebration and healing.”

Although the Charlottesville protest was overtly rooted in white supremacy, neo-Nazism is often entangled with homophobia. Videos of the alt-right march show protesters chanting “Fuck you, faggots” in response to the anti-racist contingent.

But Marshall says that onlookers won’t see much LGBTQ-focused programming in Charlottesville outside of the Pride festival, even despite the free therapy and counseling services being offered to members of the community. That’s because queer and trans leaders have been focused on being allies to communities of color, particularly non-white people in their own community.

“We’ve been supporting the events that have been going on,” Marshall claims, pointing to local town halls, gatherings, and worship services. “We’re so segregated. We need to show up for each other.”

That work will take time and effort. Marshall says that having a conversation about white supremacy in Charlottesville’s LGBTQ community can be a challenge, as people who are marginalized often struggle to recognize the ways in which they are privileged. White community members are frequently receptive to the message, but other times the discussion is “not so great,” she explains.

“It’s about pushing everybody to confront and have difficult conversations,” Marshall says. “It’s not OK for people to sit in their bubbles and be fine with it. It’s been a heartbreaking time.”

One of the biggest struggles, though, will be building trust in Charlottesville between police and local communities. Prior to the violence that erupted on Aug. 12, reports allege that law enforcement left the scene. The reasons for their departure are unclear, and Marshall claims that police have yet to be transparent about their failure to act decisively.

“They didn’t do anything,” Anderson says. “Violence was happening, and the police were just standing there. They weren’t interfering. They were supposed to be keeping people safe. People were calling 911 over and over again. No one came.” 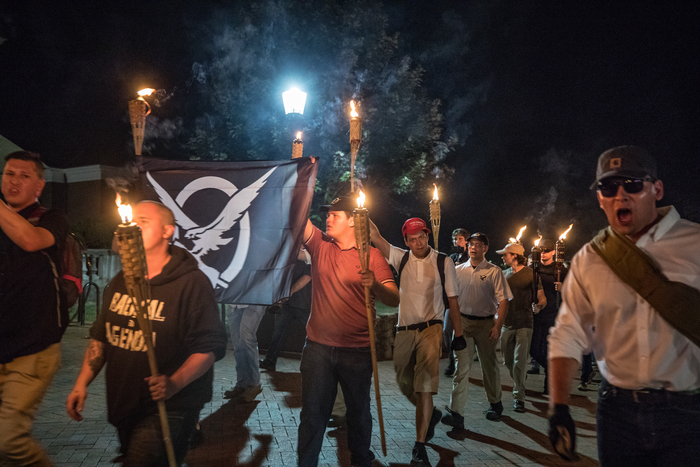 At least one Virginia LGBTQ group has responded to Charlottesville by “doubling down” on its efforts to further cooperation and collaboration between law enforcement and local communities.

Hampton Roads Pride began working with police in the area following last year’s Pulse shooting; their goal was to ensure law enforcement would be able to respond to violence against the LGBTQ community in an affirming manner. Statistics from UCLA’s The Williams Institute show that trans women of color are disproportionately likely to be harassed by police. Even in the event of a mass shooting, these populations may be cautious to work with the first responders there to save their lives.

“We’re engaged in bridge-building that we think lays the groundwork for a culture of inclusion, dignity, and respect,” says Michael Berlucchi, president of the Pride group in the small coastal town, a two-and-a-half-hour drive from Charlottesville.

In the past year, Hampton Roads has worked with local law enforcement agencies to appoint LGBTQ liaison officers well-versed in the intersections of the community. When the Pride group began its campaign, just one city in the metropolitan area had a full-time staffer in its police department dedicated to the queer and trans community. Now all of them do.

Berlucchi believes that this work will be important if an event like what took place in Charlottesvilleor even Orlando last yearcame to Hampton Roads. Richard Spencer, an increasingly influential figure in the alt-right movement, has claimed that future protests are already being planned in Virginia. Spencer told USA Today that he wants to make Charlottesville the “center of the universe.”

“We’re going to need each other,” Berlucchi says. “We just don’t know when yet.”