In early December, The Boston Globe reported that Boston’s Fenway Health Center, whose mission is “to enhance the wellbeing of the lesbian, gay, bisexual and transgender community and all people in our neighborhoods and beyond through access to the highest quality health care, education, research and advocacy,” kept Dr. Harvey J. Makadon on staff for four years despite multiple allegations that he sexually harassed and bullied both male and female colleagues. The first complaint was filed in 2013 and he continued to be employed as Director of Education and Training as Fenway through spring of 2017.

The Globe reported that 70-year-old Makadon was twice investigated by external law firms, yet Fenway CEO Dr. Stephen L. Boswell ignored recommendations to fire Makadon and to alert the board of directors of allegations made against him, deeming him “too important.”

“Fenway last year paid a former male employee $75,000 to settle allegations that Makadon had sexually harassed and bullied him, according to the three people and one former employee who knows the man,” The Globe reported.

But Fenway’s Board of Directors were not made aware of the allegations until they learned of the settlement in January 2017. Other allegations include “uninvited touching of at least three Fenway employeesunwanted shoulder and neck rubs, a hand on a knee, hovering too close at a work station, and in the worst case, allegedly putting his hand into the back of someone’s pants.” Employees say there was also “persistent dinner invitations and, in some instances, unwanted touching at off-site events.”

Makadon denies the allegations, some having been filed as official complaints, calling them “completely untrue,” but he lost his positions at Fenway Health, Beth Israel Deaconess Medical Center, and Harvard Medical School. Boswell resigned two days after the Globe published its story, “under pressure from the board of directors, employees, and donors over his handling of complaints that a prominent doctor had allegedly sexually harassed and bullied staff members there for years.” Boswell had served as chief executive of Fenway for 20 years.

“In retrospect, I would have done this differently,” he told the Globe. “At the time, I earnestly believed that the steps taken would ensure the safety of my valued staff. I profoundly regret that these actions fell short.”

Makadon was ordered to undergo individual sexual harassment training after the first sexual harassment complaint was filed, but in 2015, a Fenway employee alleged Makadon “got close to him in an elevator, put an arm around his back, and then slid his hand down the back of the man’s pants.” Other employees past and present corroborate this incident and others. Makadon received more sexual harassment training, but was eventually let go after Fenway chairman Robert H. Hale learned of the allegations and subsequent investigations.

Despite extensive coverage from Boston-based media, however, this story has yet to reach to many Fenway patients, let alone make national headlines.

What’s more, Fenway Health Center is not the only LGBTQ health center grappling with sexual misconduct allegations. Philadelphia’s Mazzoni Health Center continues to deal with the fallout from claims made against its now former medical director, Dr. Robert Winn, made public last spring. 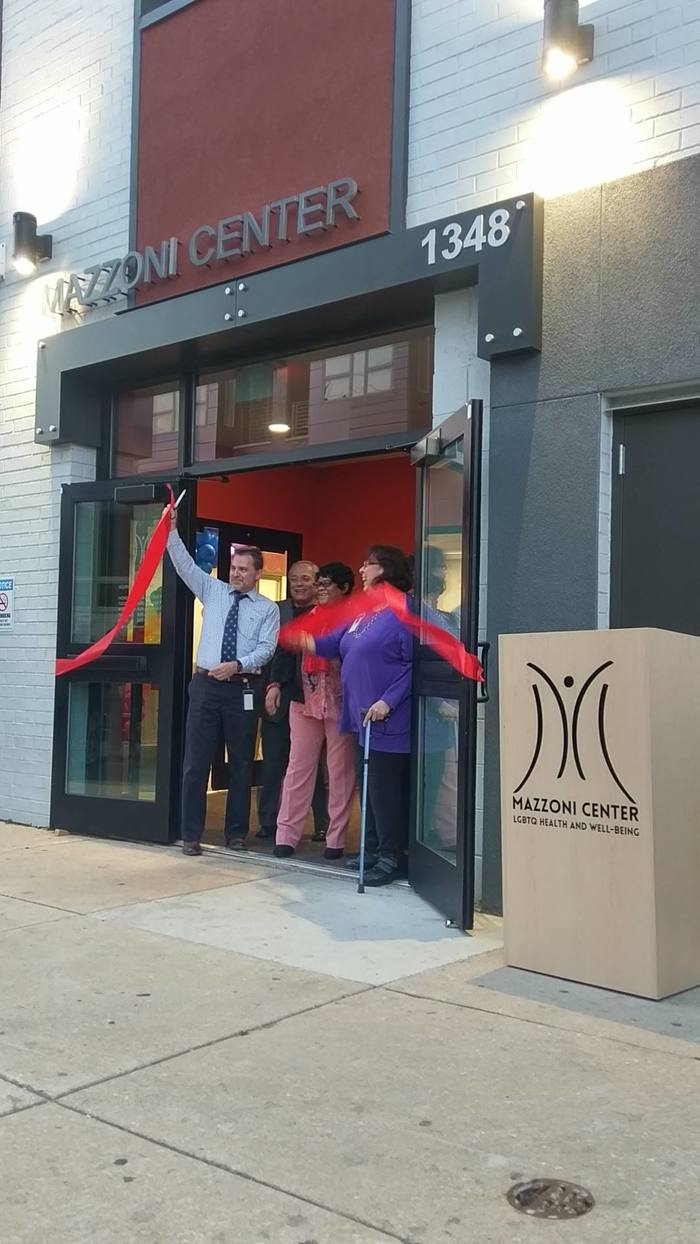 Mazzoni CEO Nurit Shein and Board President Jimmy Ruiz were removed in the wake of sexual misconduct allegations, with six fellow board members resigning. In a similar scenario to Fenway, Shein and board members admitted to having been aware of allegations made against Winn, but did not take them seriously as they were made anonymously. Former board member Mark Coyne told Philadelphia Weekly he’d heard of Winn’s sexual relationships with “one or two patients… four to five years ago.”

Former Mazzoni board president Kelly Harris reportedly ignored complaints from patients and told Coyne and other board members they were “false” and “due to disgruntled employees.”

About 30 Mazzoni employees participated in a walkout after learning about allegations against Winn.Abdul-Aliy Muhammad, a former Mazzoni employee and co-founder of The Black & Brown Workers Collective (BBWC) helped to organize the walkout, telling PhillyMag.com, “A medical director is being suspended on investigation of possible misconduct. Our executive director [Nurit Shein] has been silent as these issues have been looked intonot acceptable.”

Muhammad says staff were hesitant to talk about the fallout at Mazzoni for fear of retribution, and that meant the story did not spread widely. But BBWC created a public petition on Change.org demanding Winn and Shein’s resignation, a response to the Philadelphia Commission on Human Relations’ report on Gayborhood racism that found Mazzoni wholly problematic in many areas. Specifically, PCHR called for the Mazzoni Center to “receive training on the city’s Fair Practices Ordinance and implicit bias.”

In part, BBWC’s petition alleged that at Mazzoni, Shein “reinforces a culture of selective accountability targeting Black and Brown staff for disciplinary actions, firings and intimidation while upholding, supporting and allowing senior staff to remain predatory and violent towards clients and staff.”

Shein was then terminated and, in her first interview after leaving Mazzoni, Shein said she could not go into any specific allegations (“for liability reasons and for confidentiality reasons”), but that “any allegation that came to my knowledge was investigated, dealt with either internally or with the board and/or externally.”

“One thing that I do want to say is that when this last investigation was turned over, because we actually thought we had something really substantial, I actually had a conversation with the clinical staff at the medical office and what they said was, ‘Well we knew about this. We talked about it behind closed doors but we never talked to you,'”she toldPhiladelphia Gay News. “So when you talk about this behind closed doors and you never bring it to me even though you see me day in and day out, don’t turn around and tell me that I covered it up.”

Shortly thereafter, astatement on the Mazzoni Center website said,“Significant measures have been taken by the Mazzoni Center Board of Directors to address underlying causes of concerns, including the hiring of an Interim CEO who is charged with conducting a comprehensive organizational assessment analyzing the strengths, and weaknesses of the organization, and implementing various immediate changes and reforms to improve operational efficiencies.”

Still, some Mazzoni patients haven’t been made aware of what’s going on at their local LGBTQ health center.

“We should continue to interrogate why people aren’t having this conversation more nationally,” Muhammad tells INTO.

The scenario is not so dissimilar at Fenway. Three patients approached for comment on the allegations said they had not been informed. One named Jess (who asked last name be omitted because she continues to seek medical services at Fenway) didn’t know about the sexual harassment allegations at her doctor’s office until asked to speak about them by a reporter. She tells INTO she wondered if it was someone who had treated her (saying she once had a negative experience with a Nurse Practitioner there).

“I think I have been looking for a reason to change primary care doctors,” Jess says. “I’m really disappointed that they didn’t send out a statement.”

“I think the organization wanted to make it clear that the allegations that were brought forth in this particular instance did not involve patients at all,” Finch tells INTO. “If patients are concerned at all about this, we would encourage them to contact their provider or contact our medical director who would be happy to talk with them more about it.”

Boswell, Fenway’s ousted CEO who is accused of disregarding the allegations, saw approximately 100 patients. Finch says many credit Boswell with saving their lives.

“Many of them were very upset that they were going to have to make a change in their primary care provider,” Finch says. Fenway has not seen a drop off in patients as a result of the allegations, he tells INTO.

Fenway has vowed to hold listening sessions with staff in the coming weeks, and Finch says the organization is considering adding more for the wider community. The organization has appointed Director of Behavioral Health Jane Powers as Interim CEO.

“Fenway exists to enhance the well-being of the lesbian, gay, bisexual, and transgender community, and all people in our neighborhoods and beyond,’’ the board said in a statement. “Fenway Health is bigger than any single person.”

Mazzoni is also moving forward. In November, the organization announced the conclusion of its investigation into Winn. Those findings have been sent to the Pennsylvania Medical Board. Dr. Nancy Brisbon, a longtime Mazzoni employee, was hired to replace Winn in September.