In recent weeks, two transnational LGBTQ organizations in Europe have released reports examining the situation for LGBTQ citizens. The results aren’t the most uplifting, with both organizations calling for an end to stagnating progress on the rights of LGBTQ people.

The organizations, ILGA-Europe and Transgender Europe (TGEU), both came out with their respective annual Maps and Indexes showing the differences in LGBTQ rights across Europe on May 15 in time for 2018’s International Day Against Homophobia, Biphobia, Intersexism, and Transphobia.

ILGA-Europe’s Rainbow Europe package scores European countries between zero to 100 percent with the latter indicating full equality. The scores are based on legal protections and policies that affect the lives of LGBTQ people. It’s been released annually since 2009.

The 2018 Rainbow Europe Map and Index revealed that former higher scoring countries have fallen, including the Netherlands, while other countries we tend to think of as progressive were lacking any positive movement on LGBTQ rights.

Malta, however, has stayed atop the map for a third year in a row. Belgium and Norway followed with the next highest scores.

Even as Europe tends to have a reputation of being supportive of LGBTQ human rights, the growing populist movements across the continent have started to affect the lives of queer people. Only 16 of the 49 countries included in the analysis scored higher than 50 percent.

“We are working to counteract nationalist, populist sentiment in many different ways,” ILGA-Europe’s Senior Communications and Media Officer, Emma Cassidy, writes in an email to INTO.

To do this, the Brussels-based organization is seeking assistance across the political spectrum with the help of the European Parliament’s Intergroup on LGBTQ rights and other partners, she says.

However, the lowest scoring countries fall outside of the EU. The lowest three scores go to Turkey with nine percent, Armenia with seven, and Azerbaijan with five.

In the European Union, Latvia ranked the worst with 16 percent. Poland and Lithuania scored 18 and 21 percent respectively.

Cassidy explains that this lack of movement across Europe highlights “the political leadership gap and lack of progress on laws and policies for [LGBTQ] equality.”

In a statement, Evelyn Paradis, ILGA-Europe’s Executive Director said, “The incredible achievements of the past decade are at stake. Let’s not make the mistake of thinking that we have achieved equality.”

“There are too many signs around us that many of the recent wins are fragile,” she said.

A positive example though is the continued recognition of trans rights in Europe.

On the same day as ILGA-Europe’s Rainbow Europe release, Berlin-based TGEU revealed its Trans Rights Europe Maps and Index, noting that many countries that still force sterilize trans people and also require trans people to have a medical diagnosis before changing legal documents. 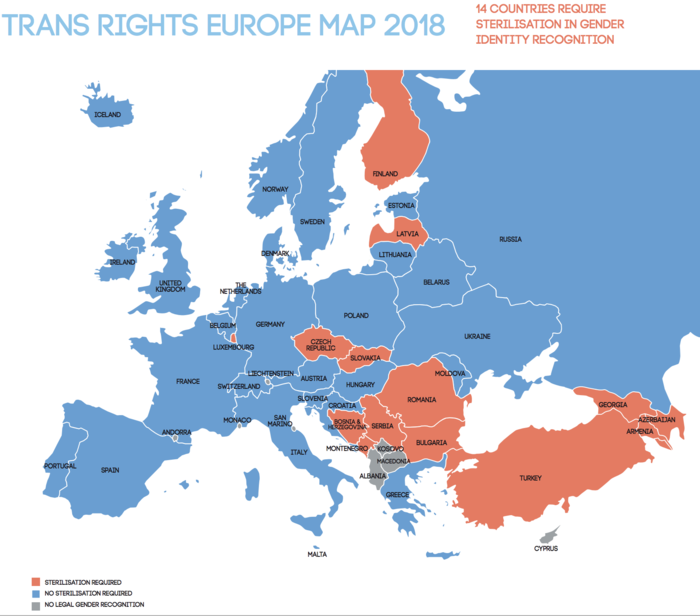 Fourteen countries still require sterilization even though in 2017 the European Court of Human Rights ruled it was not compatible with human rights. TGEU found that 34 European countries make trans people undergo a mental health diagnosis in order to obtain legal gender recognition.

TGEU said in a statement that such requirements violate the right of people to self-determine their gender identity, while it can further stigma, exclusion, and discrimination of trans people since it positions non-binary gender identities as a mental illness.

“It wasn’t fathomable that this was the reality in Europe,” Richard Koehler, Senior Policy Officer for TGEU, tells INTO, referring to the information on the map back in 2013. The map was “helpful to make [trans rights and more specifically the issue of sterilization of trans people] more visual.”

The attention is needed when trans issues are often sidelined. Koehler says that even now there is a “lack of understanding of what being trans means.”

The absence of hate crime laws across the continent is an example.

“The number of 13 [countries with hate crime laws] is for all of Europe, not just the EU,” Koehler says. “It shows an attitude towards trans people and a lack of understanding of the violence that the trans community is facing. It’s a lot of times forgotten.”

Koehler believes the low amount of hate crime laws signals a lack of protection for other minority groups, like Roma people or people living with a disability. He says that even people in perceived progressive countries “just aren’t ready to accept that that some groups in society need specific protections.”

“Trans rights is much more than gender recognition,” Koehler said, referring to the organization’s Index that covers various topics ranging from rights to asylum to anti-discrimination laws.

Koehler underlines that the report looks at the laws and not necessarily how it is in real life, which is why TGEU emphasizes the legal-focus of the Index and Map. At the end of the day these tools are meant to help the community on the ground.

“When we started in 2013, we had 24 countries that requested sterility, and it was a much lower number overall that had provisions in place so we have many more countries now that have gender recognition procedures.” This included seeing Hungry and Russia turn blue on the TGEU map—that is, they no longer require sterilization.

The maps and indexes allow the organizations to have accessible information available for policymakers that may not have a solid grasp of the situation for LGBTQ citizens in their countries.

In a meeting with a Cypriot official, Koehler recalls telling them Cyprus had no proper procedures: ‘We showed the map and said that it was the last EU country on it that didn’t have any proper gender recognition. To this, the official only asked “How many laws do we have to change…” There the map really works to help officials understand the issues trans people face.’”

“The Rainbow Europe Map is a real conversation starter with policymakers—and the fact that we officially unveil the results as part of the annual intergovernmental Forum to mark May 17 each year gives civil society a real opportunity to talk directly with politicians,” says Cassidy.

The organizations admit that the positive changes that you can see on the map aren’t just from their own work. It’s also coming from the activists and local groups that these international organizations support via programs year round.

“It’s a reflection of the work being done on the ground,” Koehler says.