Eyricka King, whose viral letter detailing threats of sexual assault and alleged physical assault at the hands of officers at New York’s Franklin Correctional Facility, is out of solitary confinement. King confirmed this detail in a phone call with INTO.

King said in her first interview since being released on Thursday morning that she was “very happy” to hear that her letter had gone viral.

“When you’re behind these walls, it’s like nothing can ever get out to the public,” King said in a phone interview with INTO. “I needed someone to hear me and know what I was going through.”

After several attempts, Eyricka King, a trans woman being held in New York’s Franklin Correctional Facility, finally had her voice heard when a letter she wrote from prison was posted online and shared on social media.

In the now viral letter, King detailed threats of sexual assault she faced from a cellmate and that, when she reported it, an officer allegedly smashed her against a brick wall, rupturing her breast implant. Since the incident, King said she had been in keeplock, a kind of solitary confinement where prisoners are locked up for 23 hours of the day.

Kelly Harrison, Eyricka’s trans mother, first heard of the alleged abuse against King on Facebook after people began to tag her in posts about the letter. 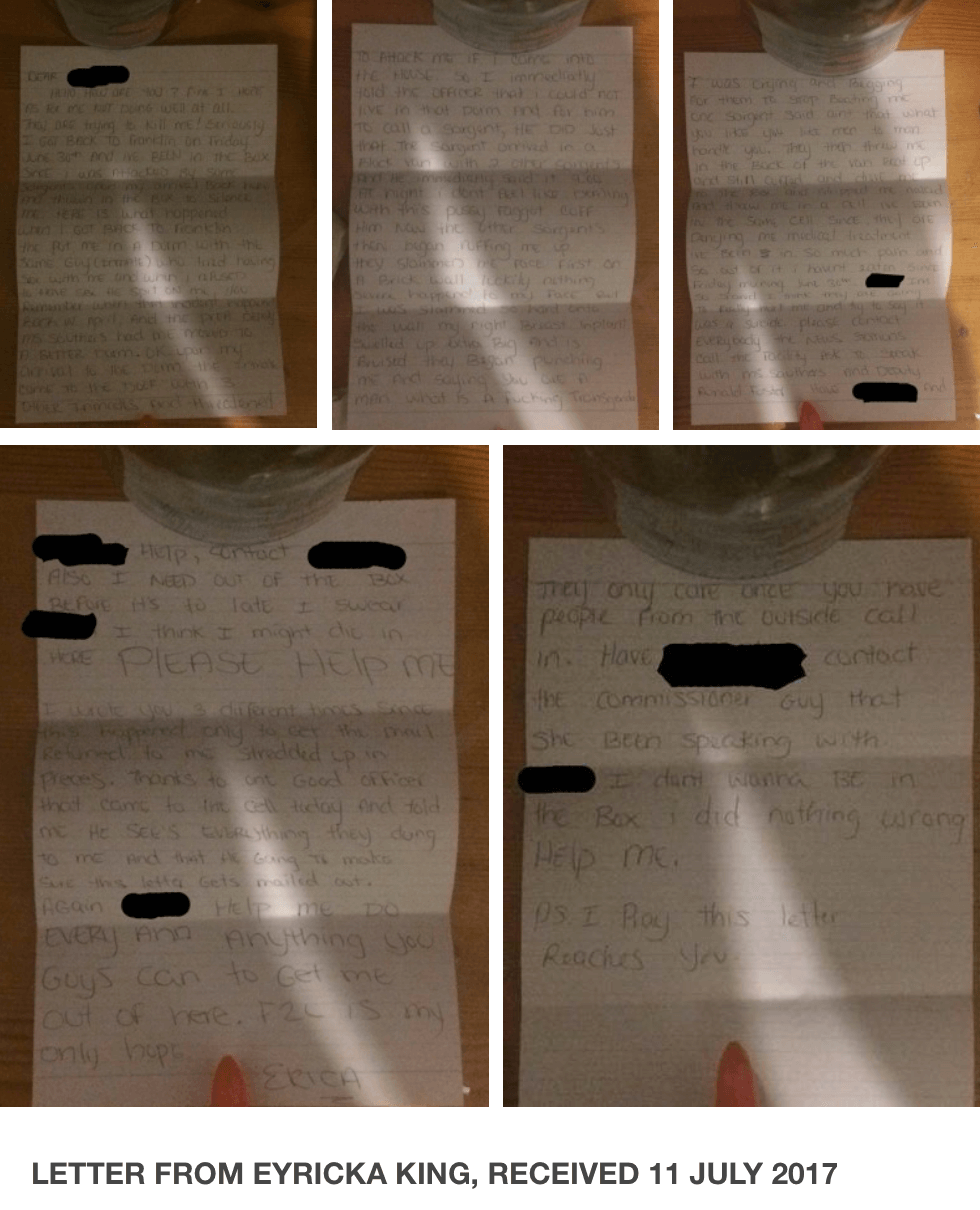 King ended the letter by saying that she needs “out of the box,” and that she believed she “might die in here.”

“I was actually shocked,” Harrison told INTO about the first time she read the letter. “Eyricka is a really quiet and shy individual. She’s not a confrontational person.”

King’s letter set in motion an investigation into the incident.

According to F2L, a New York-based volunteer-led network that advocates for trans and queer people of color navigating the legal and prison systems, the Department of Corrections and Community Supervision has interviewed King about the incident. King is currently at Downstate Correctional, where she was held in keeplock, until today, awaiting a court date. As early as July 25, King is scheduled to take a bus back to Franklin.

She says she will not board it.

“If they try to send me to Franlin, I’m planning on not getting on the bus and letting them know I can’t go there,” King told INTO. “If I don’t put them back on the bus, they’ll probably put me back in solitary confinement.”

King said she’s willing to do “whatever it takes” to not get sent back to Franklin, even if that means being sent back to “the box,” or solitary housing.

Harrison has been fighting for King to be let out of the box since receiving King’s message of abuse. Harrison first met King 10 years ago at a ball and began to mentor her as her trans mother five years ago. Once she gathered herself, Harrison turned on her camera and made a digital request to anyone listening to help King.

In the 10-minute video, which has been shared more than 1,400 times and garnered 48,000 views at the time of reporting, a tearful Harrison pleads with viewers to contact Franklin Correctional Facility, where Eyricka allegedly suffered abuse, and advocate for Eyricka’s safety.

Harrison told INTO that it is her goal to get King to another medium security facility closer to New York City.

“That is my first and only goal for right now with Eyricka, to make sure she doesn’t go back to Franklin,” Harrison said.

King’s story continues to go viral. The Instagram account, justiceforeyricka, has over 1,300 followers and has already made 14 posts about her case. Janet Mock posted about King on her Instagram, and over 4,000 people have signed a Change.org petition supporting her. 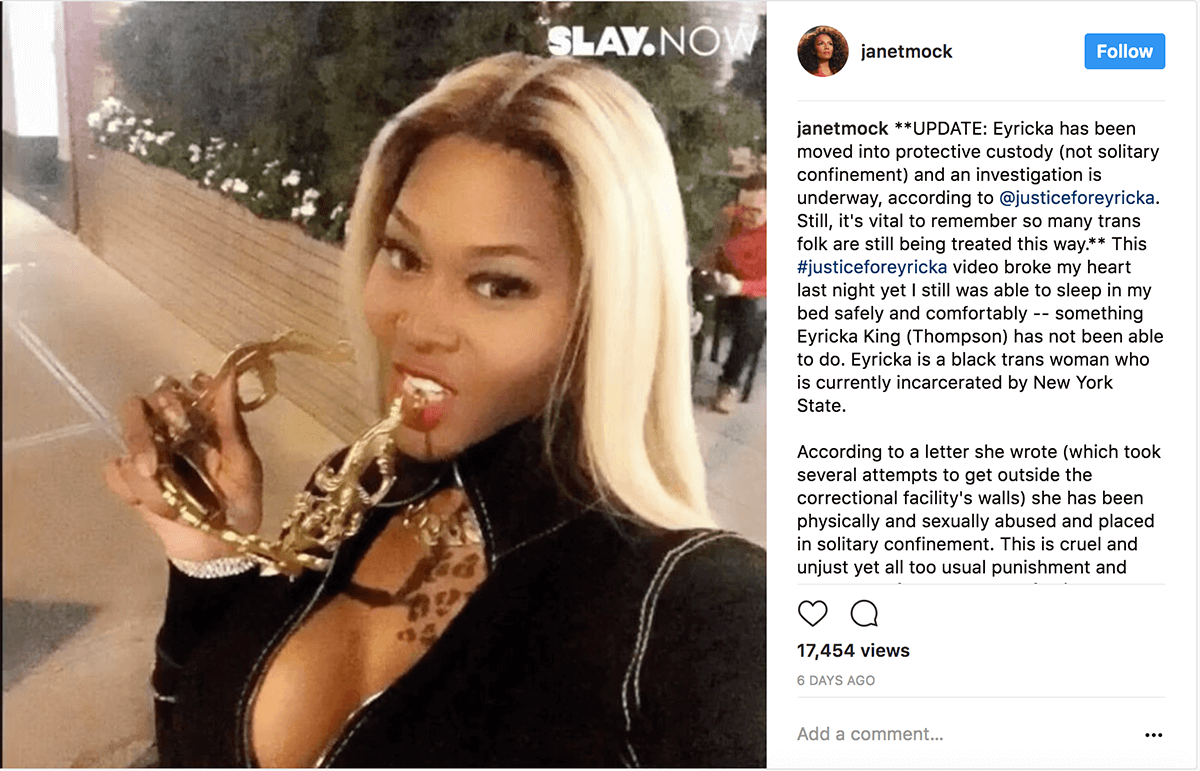 A spokesperson for F2L, the organization that received King’s original letter, told INTO that they introduced King to the Legal Aid Society, who now serves as her counsel. According to the spokesperson, who declined to be named, King’s prior court-appointed representation often misgendered her.

In a statement to INTO, the Legal Aid Society, who is representing King, said they are fighting to get King transferred to another facility, saying it is “no longer safe for her to be housed at Franklin.”

“Trans women are too often subjected to sexual and physical violence when housed in male prisons and Eyricka King’s case is the latest example. We demand that DOCCS take immediate action to ensure that Ms. King is not subjected to any further abuse or retaliation,” said Ying-Ying Ma, staff attorney at the Legal Aid Society and King’s counsel.

“This is something that happens on the regular in Franklin. Put in a box for 30 days, no contact with their family or the outside world,” Harrison said.

According to the 2015 report, “Coming Out of Concrete Closets,” 85% of LGBTQ respondents were put in solitary at some time during their sentence, with people of color twice as likely to enter solitary. Each day in New York state, 4,300 — or 8% of all prisoners —are held in solitary. 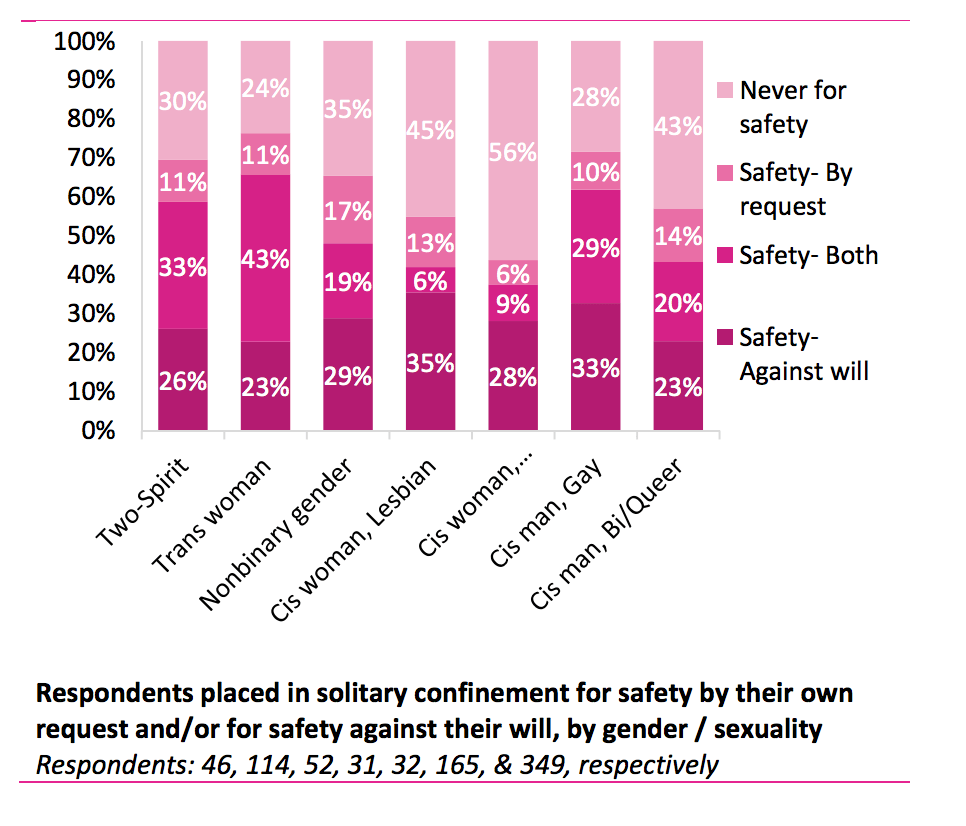 Solitary confinement is a harsh destination for anyone, but especially a trans woman who has just experienced abuse. The United Nations committee on torture has already called solitary confinement a “harsh” measure that is “contrary to rehabilitation” and has called on the US to ban its use.

Jason Lydon, founder and national director of LGBTQ prisoner advocacy group Black and Pink, said the practice of sequestering transgender inmates involved in violence — even if they are not the perpetrator — is “common.”

“When an assault happens, they don’t have a practice that actually maintains somebody’s safety without placing them in solitary confinement,” Lydon said.

LAS is also demanding that time be taken off King’s sentence for the time she was kept in keeplock.

In a statement to INTO, the New York DOCCS said they “cannot comment” on an ongoing investigation.

“Ensuring the safety of individuals at our facilities is our highest priority,” the statement reads. “There is zero tolerance for violence within the facilities and anyone engaged in misconduct will be disciplined and prosecuted to the fullest extent of the law.”

According to F2L, their current priority is supporting King during her remaining months in prison. They’re currently raising funds for King’s commissary.

As King faces a return to Franklin, and her last few months in jail, she told INTO that she wants others to recognize the dangers that transgender women face behind bars.

“You are subject to being targeted by officers and inmates. You are an outcast,” she said. “You won’t get the proper medical treatment you need. They just look at us like we’re regular men. They call us men and they make sure we remember we are men.

“This is not a place for a trans woman or anyone, ever,” she continued.