The Facebook posts have been pulled, but Bryan County Sheriff Johnny Christian still wants to know who was behind the keyboard when a group of Oklahoma parents detailed the violence they wanted to inflict on a transgender 12-year-old for using the girls bathroom at school.

Achille Schools have been shuttered the last two days at Christian’s urging after area parents unleashed a litany of threats against middle school student Maddie (her last name has been withheld intentionally).

The posts, made in an official private Facebook group for parents in the district, have been widely circulated across the internet.

Inciting the attack appears to be a post by Jamie Crenshaw reporting that “the transgender” is using the girls restroom at school. One commenter, Ty Hays, calls Maddie “a lil half baked maggot.” 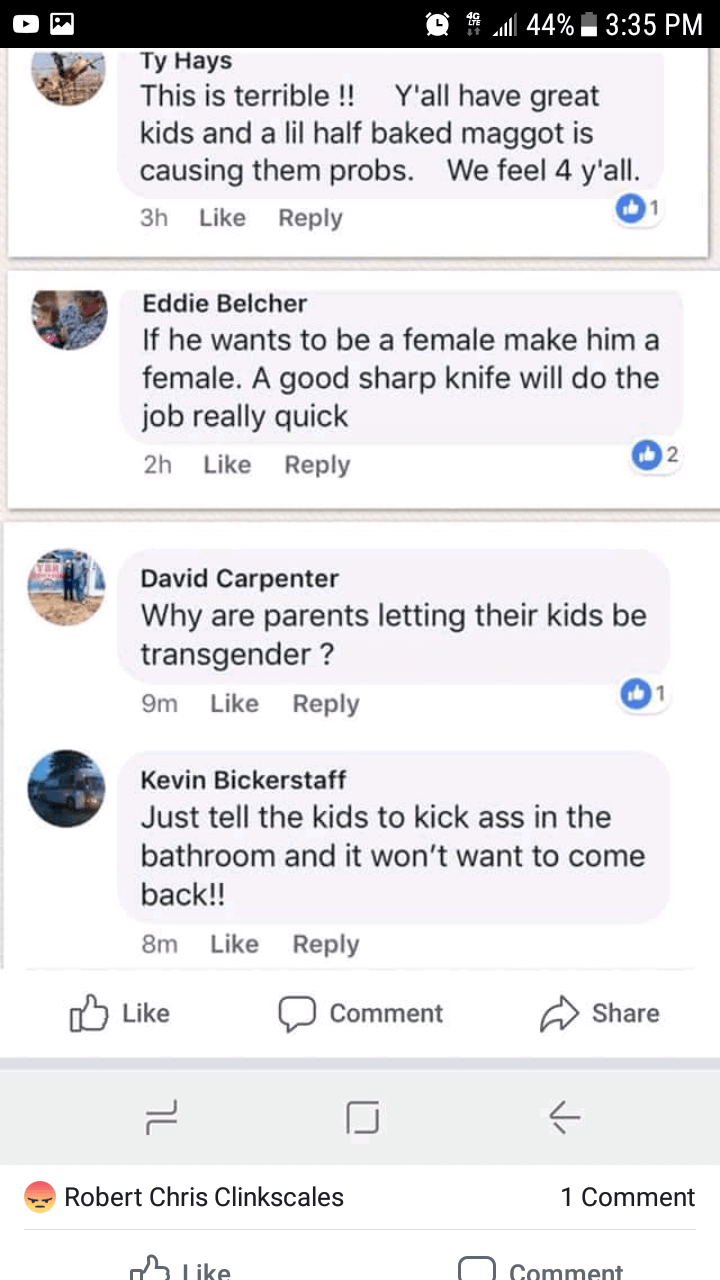 Kevin Bickerstaff suggests telling kids to “kick ass in the bathroom and it won’t want to come back!!”

In the most graphic of threats, Eddie Belcher suggests, “If he wants to be female make him a female. A good sharp knife will do the job really quick.” 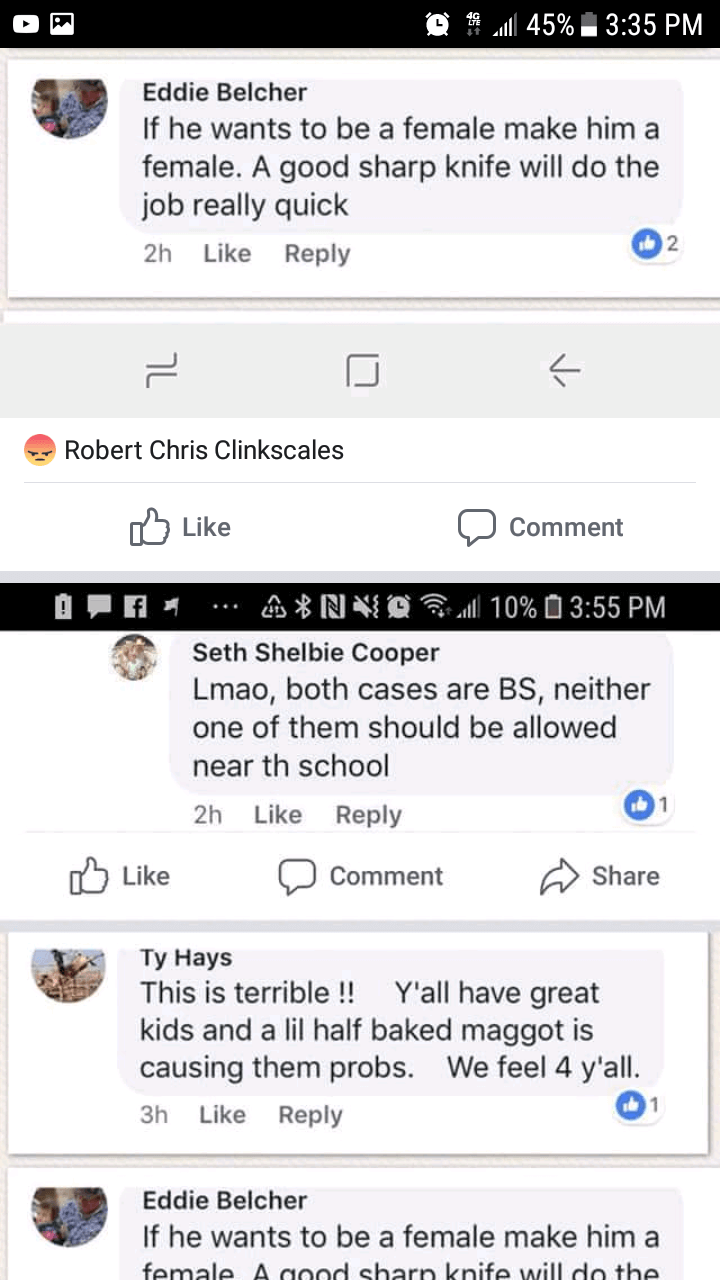 KXII reported that Maddie had used the bathroom one time because it was her first day in the middle school, and she couldn’t locate a staff bathroom, which she had used at her elementary school.

“She’s been living as female for years– she started at Achille as Maddie,” her mom Brandy Rose said. “We had no problems when we first started.”

Paula Sophia Schonauer, a local transgender activist, said she was not surprised by the violent rhetoric given her experience in Oklahoma.

“The comments left on the school’s facebook page, I’ve seen them addressed at me in comments regarding news stories regarding my activism or my run for office four years ago, but I’ve never seen these kinds of comments directed at a child,” she said. “Some of the threats they mention are very specific and believable.” 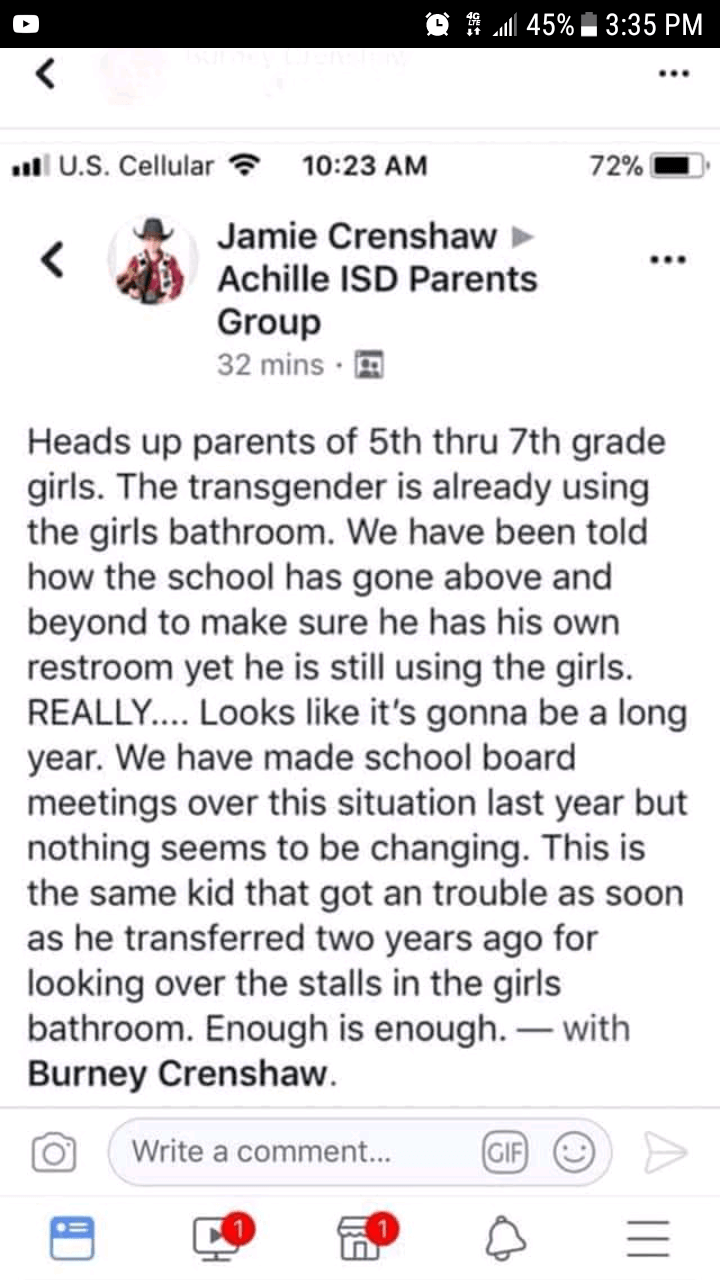 “Private discussions held on social media do not represent the views of Achille School, staff, administration, or school board,” Been said in a statement. “Achille School believes that everyone should receive a safe and free education.”

Sheriff Christian said law enforcement has assessed threats against Maddie and her family and determined there are no new concerns. The offending Facebook posts have been removed. School will reopen tomorrow.

“Maddie is excited to go back to school,” Christian said. “They have received an outpouring of support.”

On Tuesday morning, residents held a silent march in support of Maddie. The hashtag #Love4Maddie has sprung up on Twitter, with people from coast to coast sending affirmations to the 12-year-old.

For local LGBTQ advocate Ari James, the whole fallout has been oddly heartwarming. James, too, has been the target of anti-trans harassment in Oklahoma.

“It feels weird to kind of have that moment of ‘wow, there is actually a little bit of hope here’ because it doesn’t feel like a hopeful situation,” said James. “Here, this is amazing. This is progress for 2018 in rural Oklahoma.”

But James questions why an arrest has not been made.

Christian, for his part, is not entirely satisfied. He says an investigation is ongoing.

“I want to find out who was actually behind the keyboard,” he said. “We want to conduct these interviews.”