These unopened envelopes are causing quite a stir.

According to STAT, insurance carrier Aetna sent letters to approximately 12,000 people that was meant to tell them that their pharmacy benefits would be changing. However, visible through a window the envelopes was the fact that the letter was about medication for HIV treatment.

INTO spoke to one HIV-positive person, Fernando, who asked to go only by his first name, who received the letter. Fernando also sent INTO a copy of the letter.

The following text is visible through the window: 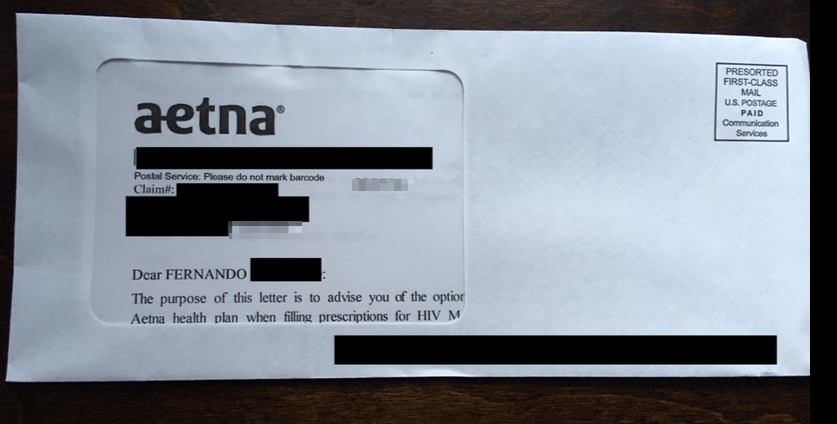 “My partner and I were kinda shocked,” Fernando told INTO. Fernando’s partner, who is HIV negative and on PrEP, received a similar envelope. “Even to have a letter that has the letters HIV on it is really bad.”

Fernando said that not many people saw his letter, as it was delivered to he and his partner’s shared PO box. However, that was not the case for all people.

Sally Friedman, legal director at the Legal Action Center, told STAT, that people who recieved the letter “have been devastated.”

“We’ve had a number of people tell us they had chosen not to disclose their HIV status to family members but this is how their family members found out,” Friedman told STAT.

INTO contacted Aetna for a statement and will update when it responds.

According to STAT, Aetna has already notified state and federal authorities about the breach. Federal law requires that a person’s HIV status be kept private, according to the AIDS Law Project of Pennsylvania.

“We sincerely apologize to those affected by a mailing issue that inadvertently exposed the personal health information of some Aetna members,” a company spokesman told STAT. “This type of mistake is unacceptable, and we are undertaking a full review of our processes to ensure something like this never happens again.”
However, for some, that is not enough.

“I don’t think them issuing an apology is enough,” Fernando told INTO.

In a letter obtained by STAT, Aetna said that customers’ personal information was only visible “in some cases.” Friedman countered by saying that, in every case advocates had seen, the information was “very visible.”