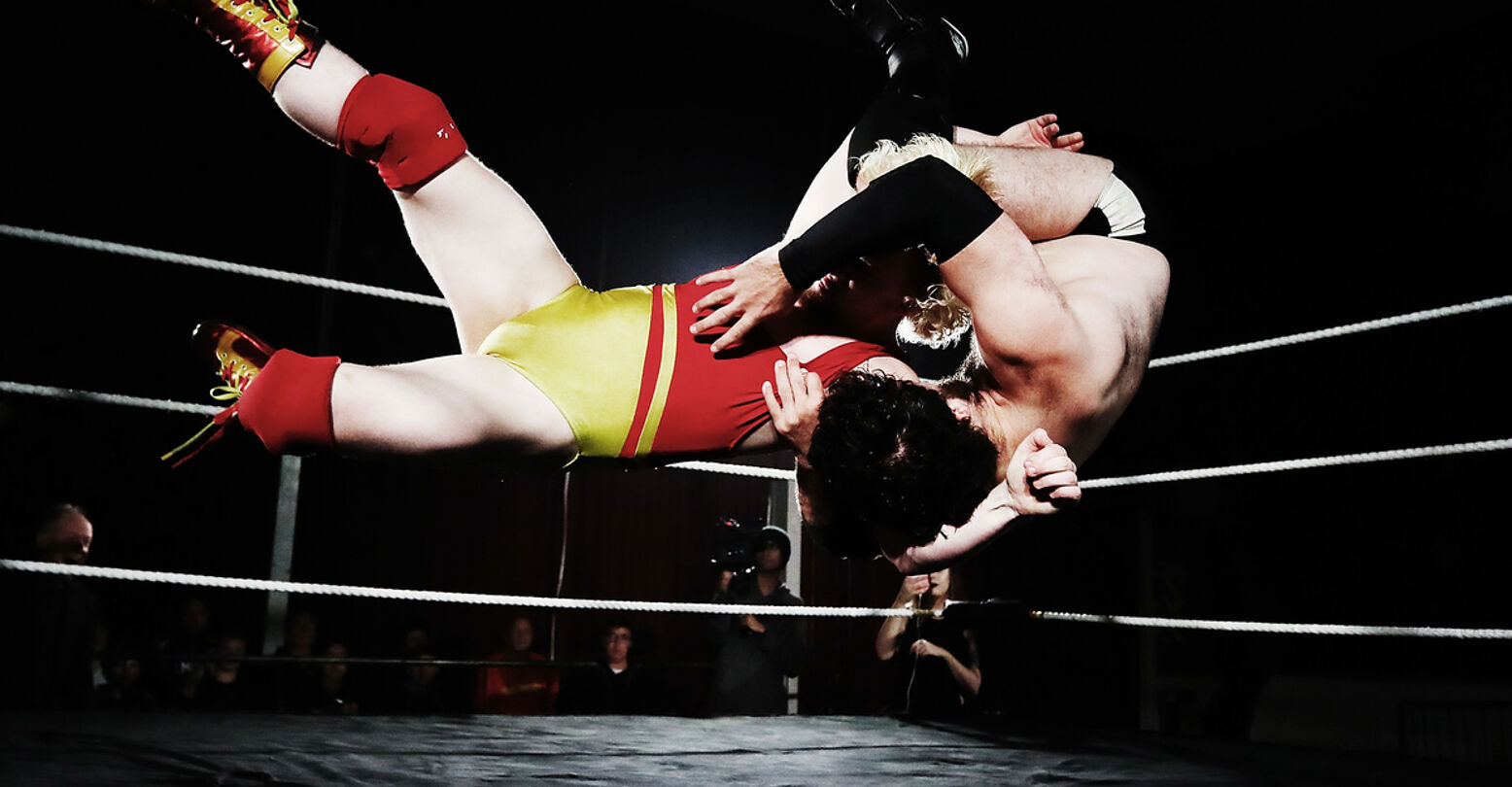 I’m losing my mind as a man in a stylish white outfit plays violin under a blinding spotlight. Distracted parents around me heft sleepy children in their arms, but the building enthusiasm of the crowd piques their interest as the stage lights flash and a man saunters out in red leather in time with the quickening quiver of the music with the effortless confidence of Mercury or Bowie.

This has been an exhausting WrestleMania week, filled to the brim with some of the best wrestling the world has to offer and culminating for me with Shinsuke Nakamura’s debut on WWE Smackdown. Thousands of casual wrestling fans will leave this stadium with his name and the passionate wailing of violinist Lee England, Jr.’s performance of “The Rising Sun” etched forever in their memories. Amidst the roar of the crowd, this is the most effortlessly happy I’ve been as a trans man in a long time.

I’ve been aware of professional wrestling probably as long as I have been aware, in the back of my mind, that I did not like being she or her. The other boys in my classes let me listen in when they shared stories about Stone Cold Steve Austin. I knew of Vader and Mankind, even if it was from Boy Meets World instead of a wrestling ring.

I circled around to wrestling through comics in 2016 in much the same way I would slowly circle around to my gender identity over a decade earlier, through adjacent interests. As Goldust taunts his opponents in the WWE with suggestive touches and seductive looks, I look surly in rare family photos featuring me, chubby as ever, in ill-fitting skirts. As GLAAD is consulting with the WWE on a disastrous and mean-spirited “commitment ceremony,” I sat sour in high school auditions knowing how well I would do if they just let me audition with the boys, trying to work out why I like the word gay, but don’t know if I like girls.

There is, in my opinion, no medium that more clearly demonstrates the concept of performative masculinity than pro-wrestling. In the following years where I learn about “trans” and “genderqueer,” stumbling to find the face I want to present to the world, to figure out if the face is slacks or skirts and whether I can still wear mascara either way, wrestling is parading in front of its fans a staggering variety of bombastic, colorful manliness.

Ric Flair might be one of wrestling’s greatest villainous heels, but he’s also one of wrestling’s most fashionable personas, with his shimmering, glittering robes and feathery blond hair. There’s Stone Cold Steve Austin’s utilitarian, working-man aesthetic or the cartoonish colors and buoyant fringe of the Macho Man, Randy Savage. There’s a spectrum to be tracked there, a spectrum of a good guy’s spartan gear to a bad man’s sequined resplendence, laden with casual misogyny and homophobia. For better or for worse, as I’m stumbling to find myself, wrestling is building a bridge of unusual characters I will later cross filled with delight and disgust in equal measure.

In a perfect world a world with a cleaner trajectory for positive portrayals of the LGBTQ community in media I could track these parallels for over a decade. I could find myself being welcomed with open arms into the wrestling community in 2016, only to discover that as I have found confidence and comfort in embracing my identity, wrestling has accepted me and my community as valid and fans worthy of a chance to see ourselves in the ring.

But the world is the way the world is today, and wrestling is dominated by a company managed by a husband and wife who gave millions to a President who suggested trans Americans aren’t fit to serve their country.

It’s true Goldust doesn’t wear the wig anymore, or taunt his opponents with unsettling physical intimacy. It’s true no one on camera talks about Mickie James’ obsession with Trish Stratus. Some wrestlers even have their own portmanteau — Tyler Breeze and Fandango, Breezango — and flit weekly through parody vignettes that call to mind the “alternate universe” fanfiction popular amongst countless fan-writers for decades. While on NXT, the WWE’s “developmental” streaming-only brand, Billie Kay and Peyton Royce declare each other life partners, the self-styled Iconic Duo of the women’s division.

But as this happens, there are only two out gay or lesbian wrestlers in the WWE, and only a handful more making names for themselves on the independent circuit. For every out wrestler, or every vocal ally, there are half a dozen more wrestlers and fans screaming “the product” is getting “too gay.” The WWE is rightfully proud to publicly support Pat Patterson, their inaugural Intercontinental Champion, but his forty year relationship with his partner Louie Dondero wasn’t acknowledged publicly by the WWE until 2014 — almost a decade after Dondero’s death in 1998.

When to make that acknowledgment is absolutely Patterson’s decision, and Patterson’s alone. Forty years is a long time to not acknowledge a person you’re sharing your life with, though, and speaks to the reality that pro wrestling is a deeply masculine and heteronormative form of entertainment with a sometimes aggressively masculine audience.

I fell in love with wrestling through comics, after a year of watching my peers and friends talking about attractive men performing breathtaking athletic feats every single week. I fell in love with wrestling because I had the good fortune to know fans who were my friends first and foremost, who knew I was a gay trans man, who could hold my hand and lead me to the best of what wrestling has to offer, through the minefields of the worst of its long and unpleasant history with women, queer characters, characters of color.

In spite of wrestling’s inescapable history, I have clawed my way to a new understanding of my own masculinity. As much as pro wrestling has shown me what I think being a man shouldn’t be, it has driven me to help other new fans find a safe space in this community as my friends helped me. It has shown me what I want being a man to mean — passionate, dedicated, stylish, a chameleon who winds his way through aesthetics the way Ric Flair and his daughter Charlotte go through robes, or Seth Rollins goes through gear, finding colors and patterns to suit my mood day to day. Like NXT’s Sonya DeVille or indie wrestling’s Jack Sexsmith, I feel more confident making space for myself in a space that is, at best, ambivalent towards me.

Standing in the Amway Center, belting out the wordless pounding rhythm of Shinsuke Nakamura’s theme “The Rising Sun” with thousands and thousands of other fans who may never know who I am, who might not care or might recoil in confusion or discomfort if they did, I have never felt more confident in myself and my identity and the face I present to the world.