Bailey Coffman is used to the Trump administration appointing officials who don’t support LGBTQ rights. But when her father, Frank Coffman, was tapped as a U.S. Marshal for the Eastern District of Oklahoma, it became all too personal.

Coffman was nominated to the position in October. In a statement, Oklahoma Congressman Markwayne Mullin claimed that the long-time U.S. Secret Service agent, who has served for two decades in the position, is an “exemplary public servant” who “dedicated himself to… Oklahoma communities as a law enforcement officer.”

“I am pleased to see the president nominate him to serve as the U.S. Marshal for Eastern Oklahoma,” the Republican House representative wrote at the time.

His daughter wasn’t as pleased by the news. When Bailey came out to her father as transgender in December 2015, she tells INTO that he didn’t take it well. During a family meeting with her brother, stepmother, and ex-fiance present, Bailey presented him with a letter detailing her years of gender dysphoria and journey to acceptance.

The 30-year-old knew there would be trouble. Although she describes her childhood as a happy one — in which she saw her father on weekends — Bailey grew up in a deeply conservative Christian household.

Coffman wouldn’t even read the letter, she claims. Instead he referred to his daughter as being “possessed by demons” and “corrupted by society.”

“This is unacceptable to our family,” he allegedly told her.

When Bailey got in her car to leave, Coffman started chasing after her. She recalls hoping that he had a sudden change of heart and was running toward his daughter to win her back — like a climactic airport scene in a romantic comedy. But instead he tried to talk her out of transitioning.

“You can’t go through with this,” Bailey remembers him saying.

The two barely talked afterward, seeing each other at holidays and her sister’s graduation. Although they used to talk almost every week, Bailey says her presence in the room inspired rapt silence, as if she weren’t even there. Although Coffman would text sometimes to check in, he was unable to even write the word “transgender.” He cryptically referred to her transition as “the other thing.”

The months of tension reached an inevitable tipping point in February when Bailey sent her father a link to a blog post asking for his support. After the White House struck at trans military service, health care, and bathroom use for students, she needed to know if he was on her side.

Coffman responded to her message within minutes. “You’re lost, and I hope and I pray you find your way out of the darkness,” he allegedly claimed.

“I figured I would get that response but you never lose hope,” Bailey says. 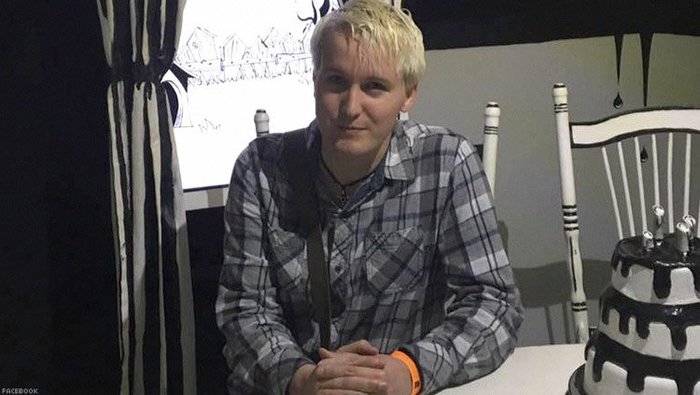 The LGBTQ website Gayly first reported on Coffman’s comments in a November interview with Bailey, which resurfaced following a BuzzFeed report on the would-be U.S. Marshal’s confirmation hearing. When asked about the allegations by Sen. Dianne Feinstein, he denied making those remarks, responding to the claims with a single word: “No.”

Coffman referred to Bailey gender-neutrally as his “child,” claiming he loves her “very much.”

INTO reached out to Mullins’ office multiple times for comment about Coffman’s statements, asking whether the House representative still supports the nominee’s appointment. His office did not respond.

Bridenstine, who was just confirmed to lead NASA after months of gridlock, referred to the Obama administration’s support of affirming bathroom access for trans students as “lawless federal bullying.”

One Oklahoma Congressman did respond, however.

Sen. James Lankford tells INTO in an email that Coffman “has a very long professional history of protecting people and treating everyone with fairness and respect.”

The Republican further claims that Bailey’s interviews with BuzzFeed and The Gaily exploited a delicate situation. “Coffman has reaffirmed his love for his adult child, and I hope they can become fully reconciled,” Lankford says. “Their family relationship and conversations deserve privacy, not political exploitation.”

But Bailey tells INTO that she didn’t come forward to score political points. She claims Oklahomans “deserve to know who’s serving them.”

“No one would know my dad’s story,” she adds. “No one would know his views on LGBTQ people because it’s not public. It would take someone like myself to go forward and say: ‘Here’s what happened. Here are my concerns.’”

Advocates in Oklahoma claim it’s imperative these issues are addressed prior to a federal appointment. U.S. marshals are tasked with tracking fugitives, as well as transporting and transferring inmates. Any bias Coffman might harbor against the LGBTQ community is likely to impact how he deals with trans people in the justice system.

“We have a federal transfer center here in Oklahoma City,” she tells INTO. “And so if a trans person is transferred to the federal center, are they going to be treated with dignity? Are they going to be housed in alignment with their gender identity? That kind of a statement makes me worried that as a U.S. marshal he’ll be callous toward people who are in a very vulnerable situation.”

Transgender people face very frequent abuse and even sexual assault at the hands of law enforcement officials in the U.S. prison system. Almost 17 percent of trans inmates claimed in a 2012 Department of Justice (DOJ) report that they had been assaulted by prison officials, and a majority of those incidents will go unreported.

No one is suggesting that Coffman’s statements would make him likely to commit that kind of violence — and arguing such would be harmful and inflammatory.

But Schonauer says prisons operate by a “top-down mentality.” Administrators set the tone for the department, meaning that if they demonstrate bias against queer or trans people, it gives other permission to do the same.

“When any kind of enmity or hostility towards trans people occurs, trans people are more vulnerable, their complaints and concerns are not listened to, and they could be in more danger than they would with someone who was more egalitarian in how they treat people,” she explains.

Troy Stevenson, executive director for Freedom Oklahoma, tells INTO that it’s “unfathomable” that any individual could be appointed to “such a high-profile role” after all but disowning their child for being transgender. He calls Coffman’s views “invalid, incorrect, damaging, and stigmatizing.”

“Vilifying your child only isolates and damages the child’s ability to understand their uniqueness and potential,” adds Oklahomans for Equality Executive Director Toby Jenkins in a statement to INTO.

Coffman has denied his personal beliefs will impact his conduct on the job.

He tells Feinstein he has never “demonstrated bias or prejudice against any individual or group of individuals” over his 25-year-career, and his son, Jacob, supported that claim. In comments made to BuzzFeed calling trans identity a “lifestyle,” Jacob said his father’s personal beliefs would not “change anything he does in the law.”

Details from Coffman’s record as a U.S. Secret Service agent were not made public during testimony, but his public profile has been met with harsh scrutiny.

On his Twitter account, Coffman has frequently reposted tweets from conservatives lashing out at LGBTQ rights. He retweeted a post referring to an Obama-era policy allowing transgender members of the military to serve openly as “immoral garbage.”

Coffman claims such actions weren’t intended to be “endorsements,” but Bailey says his comments three years ago speak for themselves.

“If his reaction toward me being trans is that extreme and I’m in his family, how would he react to someone being trans or LGBTQ in a different setting?” she asks. “If he’s going to belittle his own child when they’re coming to him for acceptance, how is he going to treat another trans person he doesn’t know?”