Being called a slur shouldn’t be part of anyone’s gym routine.

According to David Esparza, who goes by the name “Chief,” while working out at the Fillmore location of San Francisco gym Fitness SF, another member confronted Esparza, who is gay, told him that this was “not his gym” and then called him a “fucking faggot.”

“He said it loud and forceful in a threatening way,” Esparza told INTO in a phone interview.

“I see David in the gym all the time,” the email reads. “Normally he either has a smile or is lifting some impressively heavy weight!” The customer service manager called the other patron’s behavior and language “extremely inappropriate.”

In a phone interview with INTO, Don Dickerson, Fitness SF’s director of operations, said that, while the incident did occur, the email was “not accurate” and did not reflect the actual incident. Dickerson claims the manager was trying to defuse Esparza’s anger.

According to Dickerson, both parties were in the wrong and, according to video footage of the incident, Esparza was actually the aggressor in the situation. Dickerson claims the other person involved felt bullied and apologized for his behavior.

A few weeks after the incident, Esparza returned to the gym and saw the man who slurred him there. When Esparza spoke to Dickerson, Esparza said Dickerson had not seen the initial email noting his pleasant behavior and that he had no recollection of the incident. According to Esparza, Dickerson said he was told that Esparza had been “aggressive.”

Esparza said that being labeled “aggressive” for trying to address a homophobic slur is racially charged.

“How often do we know that the narrative for men of color goes to being aggressive and superhuman?” he said. “We’re not allowed to be human, we’re always aggressive.”

After Esparza raised his concerns about the gym on social media, others began to tweet at the gym, as well. Fitness SF customer Daniel Alvarenga tweeted the business saying he no longer felt comfortable patronizing the gym because of how it handled the incident.

“Hey@FITNESSSF I’m a member of your gym and I don’t think I feel comfortable as a gay man going to your gym after@saychieeef‘s treatment,” Alvarenga tweeted.

Hey @FITNESSSF I’m a member of your gym and I don’t think I feel comfortable as a gay man going to your gym after @saychieeef‘s treatment.

And the way you handled it, including blocking anyone who brings it up.

Tweeting Fitness SF probably won’t help, bc they just blocked me. I’d call or email and let them know their treatment of Chief ain’t cool. pic.twitter.com/yHC9dsQMMe 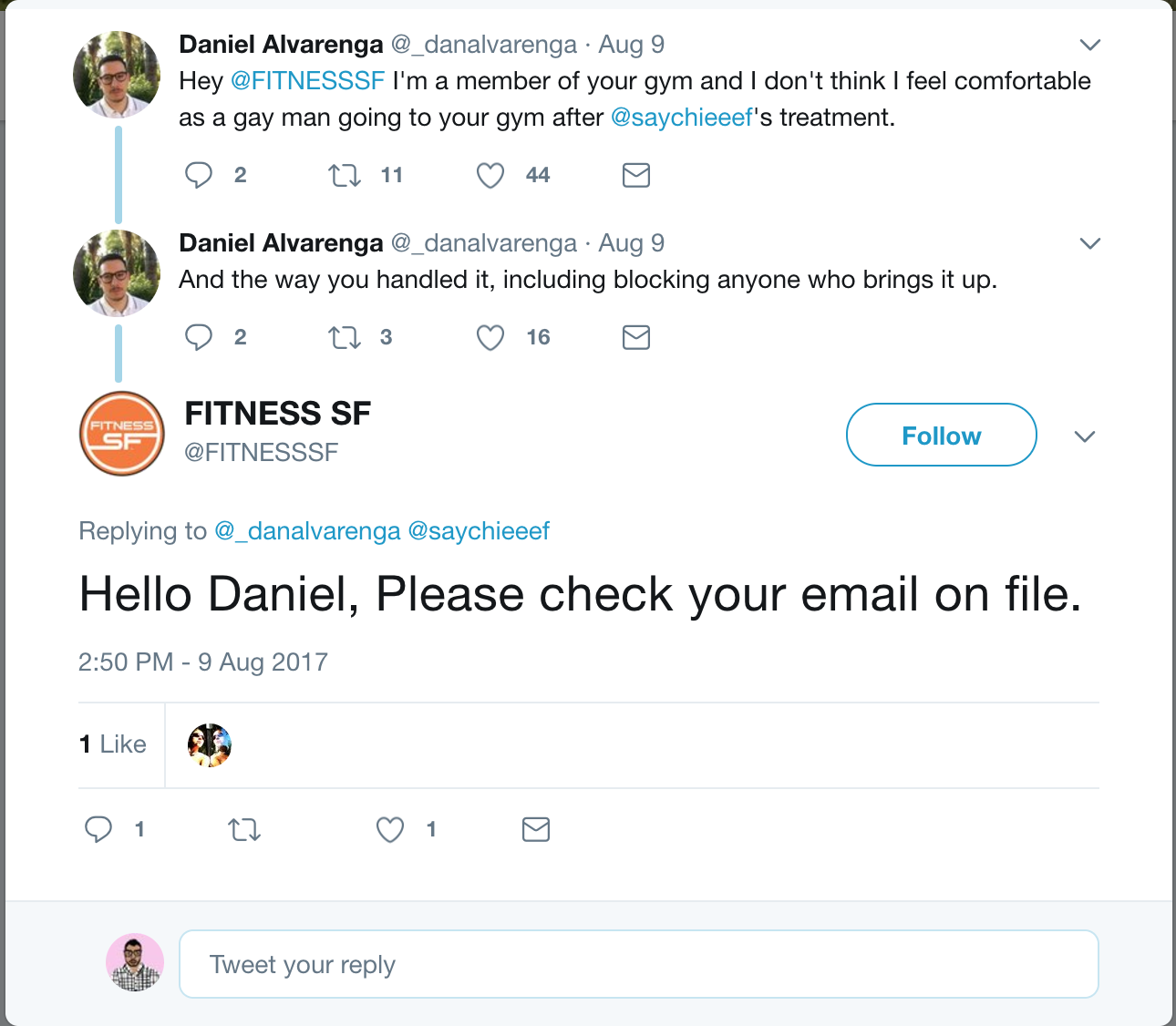 “I thought that was weird, that based on my tweet they went into my member data,” Alvarenga said in a phone interview. Alvarenga found it odd they dipped into his member data based on a tweet.

“I fail to see this as an issue since a member, who gave us their email, raised issues on social media,” Dickerson said. “It’s not a violation to send someone an email and say ‘How can we help you?’”

Alvarenga said the gym never replied to an email complaint he sent. Oddly enough, Alvarenga said, the brand wasliking his tweets even when they were mum on official communications.

Alvarenga originally chose to patron Fitness SF because it cut its contract with Gold’s Gym after learning that the CEO made donations to Karl Rove’s political campaign group American Crossroads.

Dickerson said that the social media firestorm has caused people from other states who don’t even know the business to call and harass him on his personal cell phone.

“None of our members piled on, it was people from out of state,” he said. “Why are you so quick to attack a business that stands for everything that’s important to you with no knowledge of the situation?”

Dickerson was especially dismayed by the claims of homophobia, given that he and many people in senior management are part of the LGBTQ community.

While Esparza will no longer give Fitness SF his business, he hopes they apologize for the myriad ways he says they failed to address the issue.

First, Esparza hopes the gym adopts a zero tolerance policy on discrimination and puts its staff through implicit bias training. He also hopes that the staff involved with the incident are disciplined or demoted for not handling his complaints appropriately. Their mishandling of the situation, Esparza says, shows the difference between having gay clientele and being a safe space for gay gym-goers.

“Ally isn’t a label,” Esparza said. “It’s an effort, a journey, a process. They’re not allies.”