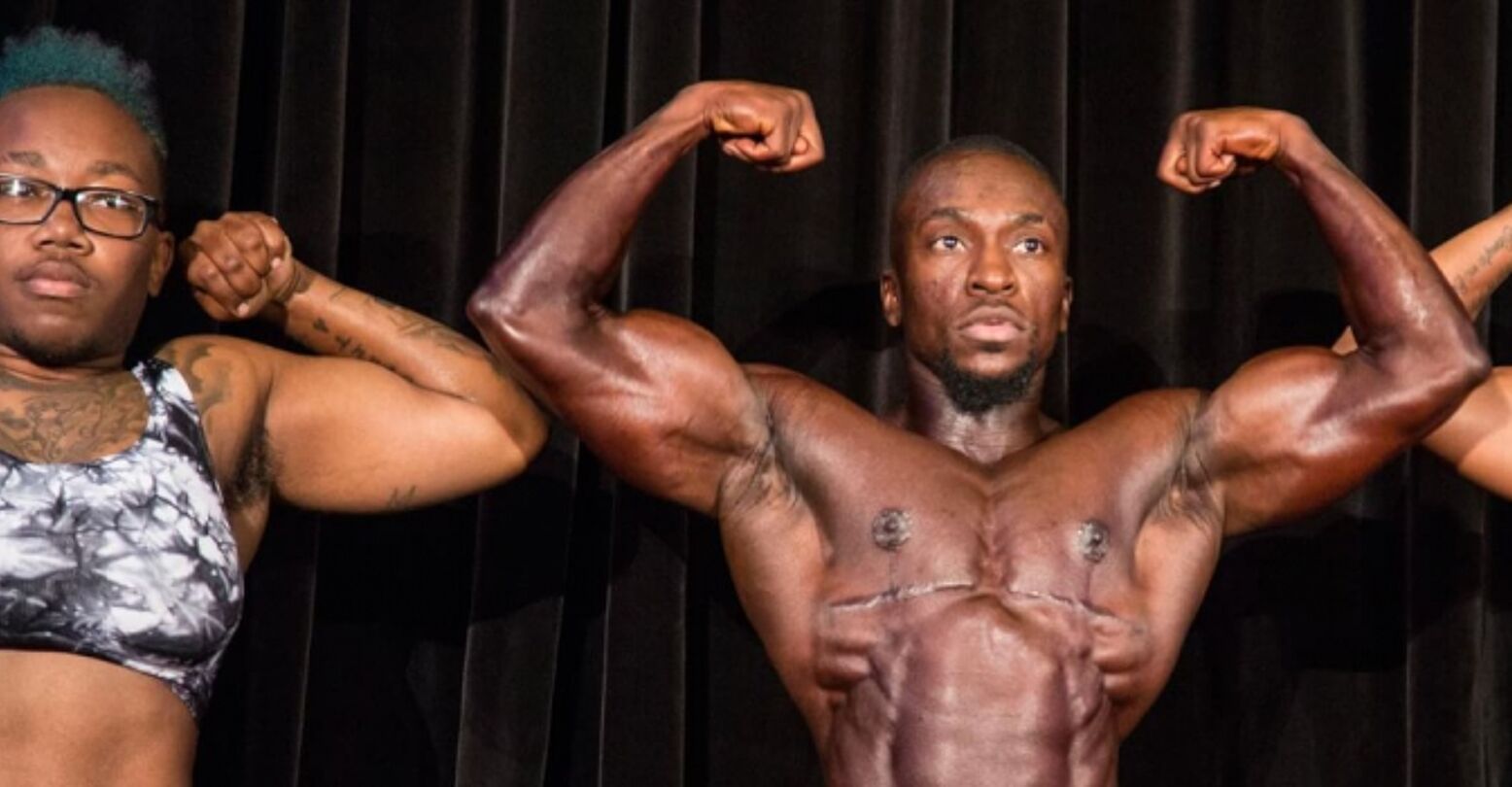 San Francisco’s oldest LGBTQ publication, the Bay Area Reporter, has published an extremely transphobic review of the new documentary Man Made, which follows trans men who compete in a bodybuilding competition. Directed by out trans writer T Cooper, Man Made is premiering at the Frameline Film Festival tonight,  and the Reporter‘s preview starts out by referring to the central cast as “four biological women bodybuilders transitioning or transitioned to male, which makes the title something of a misnomer.”

The problematic language continues, as the writer, Erin Blackwell, writes that the men “were women when they decided to become men, so they are in fact ‘woman made.'” She adds that “weightlifting is the way out” for these individuals who are “rejecting their natural bodies.” All of these sentiments are incredibly transphobic and against the policies of both GLAAD and the NLGJA. She also erroneously refers to them as “transsexual” at one point, a label which is not used by anyone in the film.

The review is bizarrely filled with disdain for the trans men Man Made follows, injecting judgments on their identities, choices, and lives instead of the film itself. Blackwell refers to one contestant’s partner as “a blonde zaftig nurse” (she’s a doctor) and writing that she “supports him all the way, even though she’s never seen him completely naked.” The review continues: “He exudes the least drama, but he’s already been through a suicide attempt and a three-year breakup from his now-wife. His age gives him an edge: he’s figured himself out.” 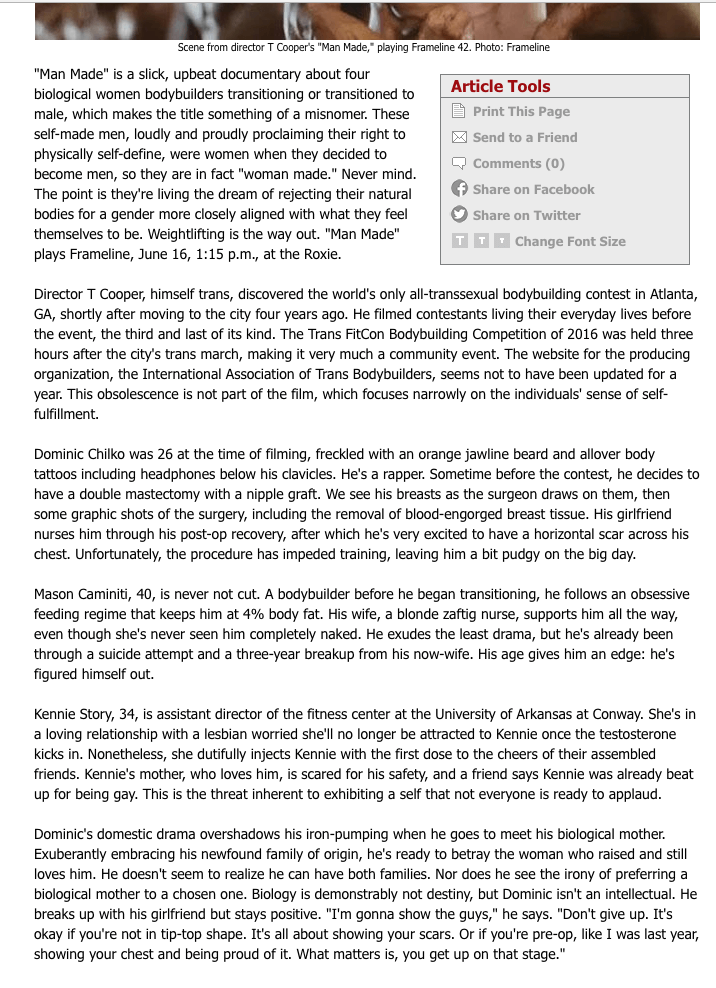 As for another competitor,  Dominic, Blackwell refers to his meeting biological mother for the first time on camera as “domestic drama,” writing of embracing his new queer chosen family: “He’s ready to betray the woman who raised and still loves him.”

“He doesn’t seem to realize he can have both families,” Blackwell writes. “Nor does he see the irony of preferring a biological mother to a chosen one. Biology is demonstrably not destiny, but Dominic isn’t an intellectual.”

Cooper tells INTO says he’s used to seeing deliberate misgendering and transphobic language from some media outlets but was a shock to see it published in the Reporter.

“It was a surprise and, of course, a disappointment to see an LGBTQ and supposedly T-friendly publication like the Bay Area Reporter allow this type of intolerant stance towards trans people to appear in the pages of their paper in both print and online,” he says.

Before the online version was removed, one commenter posted a similar sentiment.

“This is the most transphobic review I have ever read and I am shocked that EBAR would post it,” one commenter wrote on the article. “This is a hate crime posing as an op-ed. WTF is going on at your editorial review? I can’t wait to alert area trans advocacy groups to what this ‘paper’ considers ‘fit to print.’”

Cooper says it’s especially disheartening as Man Made marks his first time at Frameline, one of the country’s largest LGBTQ film festivals.

“We are so excited to be here and feel welcomed by a creative community and festival that supports the notion of trans people like myself getting behind the camera and telling trans made trans stories like those found in Man Made,” he says.

INTO reached out to Bay Area Reporter publisher Michael M. Yamashita and arts editor Roberto Friedman for comment and was told the article was taken offline, but as of publishing time, it was still available at the same link.

When asked if they had additional comments on why it was published in the first place, Friedman responded: “Nope.”

“When media in our own community misgenders or denies the very right of trans people to self-determine their identity, it gives permission to the wider media to do the same—which is a circumstance we can ill afford in this current climate in which LGBTQI rights are under constant threat and attack,” Cooper says. “Commentary like the Bay Area Reporter’s is precisely why we need much more trans made storytelling, to broaden minds and open hearts and allow space for true diversity and acceptance to flourish. It’s a shame that the BAR felt like it was okay to publish a piece that explicitly does otherwise.”

Update 6/19: Friedman reached out to INTO saying the Reporter has “taken the offending piece offline until I can edit it and remove the incorrect passages.”

“The errors were from ignorance, not any malicious intent,” Friedman wrote in an email. “In the meantime, the writer has requested (and has been granted, I believe) an interview with the director, who can describe his intentions and thereby educate her.” Friedman says the writer of the article is hoping to speak with Cooper for a published interview “so he can raise my trans consciousness as a way to redress the situation and further promote the film. …  I’ve gone over my review with a trans friend of mine, who has helped me understand where I went wrong.  my intention was and is to promote transgender culture, so I’d like to get it right.”