Patricia Todd has been representing Alabama in the House since 2006, yet she’s somehow managed to steer clear of Roy Moore. During our interview, I ask if she’s ever had the opportunity to meet the Republican senate nominee, and she responds, “Nopethank God.”

God is a huge part of the conversation surrounding Alabama as of late, with the state’s special Senate election happening tomorrow. Talking with Todd, the first ever openly gay elected official in the state of Alabama, reveals her true affection for the state and people who have been recently aligned with bigotry, misogyny, and sexual assault care of Moore’s Senate run.

“People have an impression of Alabama, which isn’t always correct,” she tells INTO. “Especially Birmingham. It’s a large city; it’s an urban hub. It’s very diverse. There is a lot of diversity here because of the University and corporations. Of course, when you get out to the rural areas it’s a little different, but I think that could be true with any state although some might tend to be more progressive thinkers than others.”

Most Alabamians are aware of Moore’s checkered history in professional politics (he was first suspended by Alabama Judicial Inquiry Commission in 2003 and for a second time in 2016 for violating the Alabama Canon of Judicial Ethics), and now the accusations nine women have lobbied against him for inappropriate and unwanted sexual conduct.

“I just think he’s a loony toon,” Todd says. “Most of us do who live here and lived through his political career and being removed from the court twice, but he has his very loyal base and every single one of them is going to come out Tuesday and vote for him.”

Still, similarly to other local and national upsets alike, Moore’s candidacy has inspired a counter-reaction that Todd is proud to see happening in Alabama. Currently, that means rallying around Democratic nominee Doug Jones. 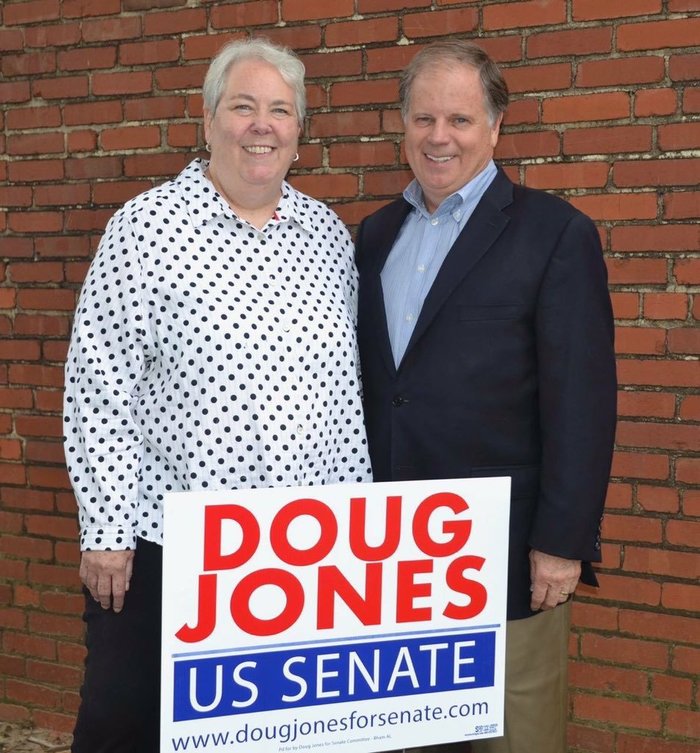 “It has motivated more people to get active,” she says. “We have had so many people show up on Saturdays to canvas for Doug that have never been involved in a campaign, and they are raising a lot of money through his campaign. Between Trump getting elected and this thing with Roy Moore, it’s like any progressive person in Alabama now is like, ‘I gotta do something because this is outrageous!’ So, yes, we have seen a lot more activism and money raised because of him.”

She doesn’t think most Alabamians agree with what Moore says publicly about the LGBTQ communityit’s just that it’s less of a concern to them than seeing their own personal interests being represented by someone aligned with conservative values.

“Amongst most of the legislatures I work with, many of them might hold their nose and vote for Moore because he’s a Republican but they aren’t homophobic,” Todd says. “A couple of them are,” she adds, but believes that too many Republicans are just too hard-pressed to vote Democratically. They’d sooner vote for a homophobe, racist, and predator. Should that kind of person win, Todd says the affect would be devastating to the entire state.

“[It would mean] Alabama is dead,” she says. “Closed for business. I think it’s a terrible message. I mean, he’s been removed from the bench twice which obviously means he does not support or defend the constitution. He believes the Bible is God’s word and that’s what we should be ruled under. I think it will be terrible for economic development because what company wants to relocate to a state and bring employees to a state that elected this bigot? It’s so outrageous. People already have a negative opinion about Alabama, we don’t need to add anymore to that by electing him into office.”

Todd says Alabama is at a crossroads, with the special election essentially asking Alabamians to vote with the kinds of values they profess to holding versus their party affiliation.

“Do you want to elect somebody you know is going to hold the state back, who is going to embarrass us, not be able to bring jobs into Alabama, or are you willing to put your party affiliation aside and realize its more important to elect somebody who is qualified and a remarkable candidate, but just happens to be a democrat?” she says. “I’ve heard people say would rather vote for a child predator than a democrat. If people feel that way, that is extremely sad. It’s mind boggling. And these are the people that call themselves Christians. I think its going to be damaging to our state for a long, long time.”

With polls showing Moore and Jones to be just a few points within one another, the election is likely to be a close one. But Todd says she feels if Republicans can vote with their best interest of the state instead of conservative ideals while ignoring Moore’s terrible track record, Alabama will be the true winner.

“They cannot stay home,” Todd says. “If they stay home, we are in trouble. But if they do the right thing, we can beat him.”