“My pride was in the way,” he says. “I was embarrassed and ashamed and anxious about it.”

A queer trans man, Ramirez had been homeless on and off over the span of a few years, and the government assistance he received wasn’t cutting it. A friend helped him gather the courage to launch a GoFundMe campaign to meet his living expenses, the first of a few he would launch. He says he wished there was a more private way to ask for help.

Rachel Blank and Cortney Scott have heard a lot of stories like Ramirez’s as of lateand they have their own. Blank says traditional crowdfunding platforms, while heavily-utilized by LGBTQ people for everything from business ventures to gender-affirming surgeries, aren’t always ideal for queer people.

Blank and Scott, an engaged couple looking to have a baby, created the site out of personal necessity.

“We started looking at it and were kind of blown away with how complicated all the different options can be and how insanely expensive,” Blank says.

The couple wanted to try reciprocal in vitro, where one partner provides eggs while the other carries the pregnancy. But a single try, they learned, would cost them between $40,000 to $60,000.

“I was like, ‘I wish we could just ask people for this for our wedding present rather than them giving us stuff we don’t need,’” says Blank.

Blank and Scott longed for a space where they could learn about their family planning options while simultaneously raising money among a supportive community. The more they talked about it, the more it seemed like other LGBTQ people might want that, too.

“Instantly, it was like, well, what about trans people that want to transition?” says Blank, whose sister is transgender and pent a decade waiting for gender-affirmation surgery due to cost. “Or what about people that are in crisis? It was a pretty obvious move for us–let’s make this for the entire community.”

So, she and her fiancee started their own crowdfunding platform specifically for LGBTQs: Pride Pocket. 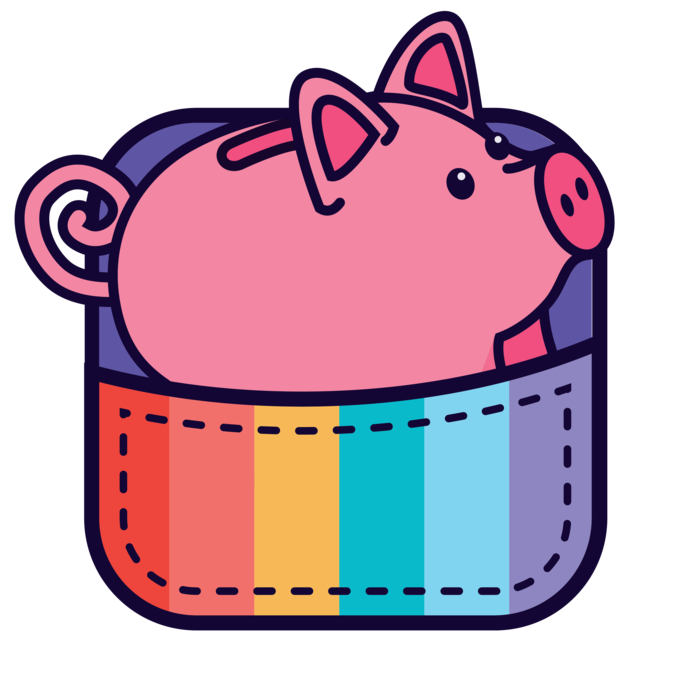 Early on, Blank and Scott’s queer friends and family offered up a laundry list of challenges they had encountered in trying to raise money through other crowdfunding platforms like GoFundMe or Kickstarter.

“There’s these great advancements in crowdfunding, and the problem with that, for a lot of queer people, is that there’s no privacy,” CEO Britney Achin tells INTO. “What if you want to transition but you’re not out? And what if, because you’re gay, you finally came out to your parents and they kicked you out? And now you have nothing, but you’re afraid that the rest of your community might turn on you, too? What do you do?”

Crowdfunding sites tend to offer myriad options to donors wanting to keep their gifts anonymous. But for those asking for funds they have historically promoted visibility, both as a means of maintaining accountability to donors and increasing outreach. GoFundMe requires fundraisers to use their full names for sake of transparency, the site notes.

Pride Pocket offers three privacy options. For those wanting maximum security, users can run a campaign that is invite-only, meaning the campaign owner can choose who sees the fundraiser, with donors having to login. Or users can create a campaign where only those who have the link can access it, and it’s still not searchable online. For those wanting maximum visibility, there’s also the option of an entirely public campaign.

The company also doesn’t pull a percentage from the money fundraised. Instead,the company takes a 2.9 percent surcharge from donors to cover its costs.IndieGogo, for example, takes a five percent fee from funds raised and charges a three percent transaction fee. Kickstarter’s fees are nearly identical. 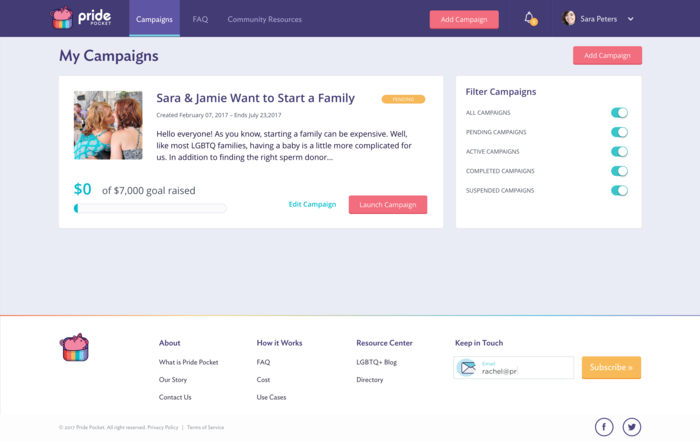 Pride Pocket also functions as a hub for free resources and content for LGBTQ people, hosting information on family planning, transitioning, and legal rights. Finally, Pride Pocket has built-in privacy settings allowing users to raise money for LGBTQ-related causes without having to out themselves or leave an internet footprint.

Ramirez says he would definitely be interesting in using those kinds of Pride Pocket privacy settings in future campaigns. He also appreciates that the person running the fundraiser keeps all of their donations.

“It sounds really really helpful and compassionate and considerate towards the community,” he says.

Achin says Pride Pocket aims to do more than serve as a fundraising platform, and a large part of her role is generating articles and resources for users. Blank and Achin envision a site that connects LGBTQ advocates and organizations to users. Need legal advice? Pride Pocket will provide a list of LGBTQ legal advocacy organizations. Thinking of raising money for chest binders? Pride Pocket is partnering with Point of Pride, a non-profit that, among other things, operates a binder donation program.

LGBTQ activist and entrepreneur Kayce Brown has raised hundreds of thousands of dollars on Kickstarter for several different ventures. She welcomes the addition of an LGBTQ-specific platform like Pride Pocket.

“I think it’s really important to be able to focus on your community,” Brown says. She noted that she was successful in campaigning for LGBTQs because the community showed up for itself, and allies followed.

Bren Coombs, an entertainment producer who has many successful crowdfunding campaigns, suggests a queer fundraising platform can benefit entrepreneurs and arts, too.

Raising money on Kickstarter was much easier when it first launched in 2009, Coombs says. Since, oversaturation has made it harder and harder for projects to gain traction on the site.

“I think that would be particularly helpful to have it geared just toward the LGBT community in that things can kind of get lost in the other platforms,”they say. “You’re having to go onto Facebook or Twitter or chatrooms or sending emails to your herd to get those other platforms out there so that people are aware of them. But if it’s already in-house on a platform that is geared toward the people that you want to get involved, then I feel like that would be a lot easier to get people to know what you’re doing and notice it.”

Those wanting to test out Pride Pocket will have to wait a little longer. The site is still in beta testing, expected to launch this spring.

Images via Getty and Pride Pocket