A right-wing group launched an ad campaign on Monday urging Alaskans to vote in favor of one of the nation’s most dangerous anti-LGBTQ laws.

In a 30-second TV spot produced by the Yes on 1 campaign, a woman referred to only as “Kate” recounts an experience in which she encountered a transgender person at a public pool. She claims the alleged individualwho is misgendered throughout the videowatched women in the locker room shower, and staff members did nothing to prevent it. Kate says staffers told her she “was the one with the problem.”

“Predatory men are using these laws to violate women,” she concludes.

The advertisement is part of a weeklong ad buy from the Yes campaignwhich is being spearheaded by the right-wing Alaska Family Councilin support of Proposition 1, a ballot initiative currently up for a vote in Anchorage. If passed, it would force trans residents in Alaska’s largest city to use the public bathroom which corresponds with the gender listed on their original birth certificate.

Even if a transgender woman were to update all of her identity documents, she would still be forced to use the men’s restroom in public.

The Yes campaign will spend more than $23,000 to broadcast the anti-LGBTQ commercial on local news stations, as well as during the airings of Megyn Kelly Today and The Tonight Show Starring Jimmy Fallon.

It remains to be seen whether the Yes campaign’s newest commercial, which will air more than 30 times before March 18, will have an impact on the referendum. Mail-in ballots are due April 3. A 2012 effort to pass an LGBTQ-inclusive nondiscrimination ordinance failed after a series of cartoons aired on local television warned it would permit transgender women with hairy legs to use female changing facilities.

But aside from the transphobic aspects of Kate’s message, there’s a major obstacle to the ad resonating with voters: Kate isn’t an Alaskan.

Her real name is Kate Ives. Although the video is filmed in what appears to be a totally nondescript suburban home in Anytown, U.S.A., she currently lives in St. Paul, Minn. with her husband and children.

What’s more is that Ives is no ordinary mom: She helped lobby for an anti-trans bathroom bill similar to North Carolina’s semi-repealed HB 2.

On the floor of the Minnesota legislature in 2016, Ives told an extremely similar story to the one she recounts in the Yes campaign video. During the testimony, she claimed the individual in question, whom Ives called a “biological male,” was “typing on his phone” while spying on women in the shower.

“I am trying to be sensitive to their feelings, but I don’t believe that I need to relinquish my right to privacy and safety,” she told members of the legislature.

This is actually the second time Ives has appeared in a series of videos targeting members of the trans community. A month after addressing Minnesota lawmakers, she starred in Ask Me First, a campaign founded by the conservative Family Policy Alliance in 2016. The organization operates branches in 40 states, of which the Minnesota Family Council is one.

Ives tells the same story in the two-year-old videothis time elaborated in a more detailed monologue.

“There is no screening,” she claims in the segment. “There are no safeguards whatsoever. There’s no reassurance somebody can’t come in with harmful intentions.”

“I want to encourage people to speak up for themselves and their children,” Ives adds. “Our children need us to protect them. Nobody asked me before I was put in this uncomfortable situation. Now this is the perfect chance for us all to come together to speak out for the truth and the reality that our dignity, our rights, our safety, and our privacy matter.”

Fair Anchorage Co-Chair David Lockard, who is helping lead the No on 1 campaign, doesn’t believe the message would be received with open arms if Alaskans knew that Ives is an outsider.

“One of the distinctive things about Alaskans is we like to do things our own way,” he tells INTO over the phone. “People up here value leaving each other alone and not bothering people who aren’t bothering you. So for somebody from Minnesota to come to Alaska and try to influence the way we do things, it doesn’t seem like something Alaskans would like.”

“Alaskans are independent people,” adds Denise Sudbeck, who is also a co-chair for Fair Anchorage. “They don’t like somebody from outside telling them what to do.”

Lockard, whose trans son attends school in Anchorage and has appeared in videos for the No campaign, believes it’s “underhanded” not to disclose that Ives isn’t a local. Although the video doesn’t specifically make the claim that its subject is from Alaska, viewers are likely to assume she is.

“It seems like it’s a local statement,” he claims.

Using a non-Alaskan as the face of the Prop. 1 campaign could also be viewed as hypocritical, critics say. In an email to supporters, Alaska Family Council President Jim Minnerywho is also chairman for the Yes campaignblasted national advocacy groups for organizing a “carefully orchestrated campaign” across the U.S. to further LGBTQ rights.

“There is a puppet master controlling the strings,” Minnery claimed in a Feb. 23 correspondence obtained by INTO. “LGBTQ activists have used bullying and blackmail tactics to strong-arm corporate America, coercing them into becoming promoters of their agenda. To be clear, this is not an organically grown corporate culture demanding that these businesses take stands on divisive cultural issues.”

Meanwhile, the Ask Me First website links directly to the Alaska Family Council page, which it lists as a participating organization.

A banner on the right-wing group’s homepage also redirects to NobodyAsked.org. Although the site is labeled as a project of the Alaska Family Council, the videos posted on the webpage are recycled from Ask Me First, the most recent of which dates back to January 2015. The videos include Kate’s original interview.

When INTO reached out to Minnery for comment, he alleges the “local residents” who approached the Yes campaign “are afraid to tell their stories.”

“Kate has been harassed and threatened for simply being uncomfortable with a man in the women’s shower,” he says in an email. “We live in upside down times when people are fearful for speaking up on such a common sense issue. We’re so grateful for Kate voicing the concerns of women here in Anchorage in the same position.”

During his brief correspondence with INTO, Minnery “dared” this outlet to use his statement.

But contrary to Minnery’s claim about a “carefully orchestrated” pro-LGBTQ agenda, Minnesota parent Dave Edwards alleges the opposite is true: Ives is part of a group of women who vehemently lobby against trans rights. 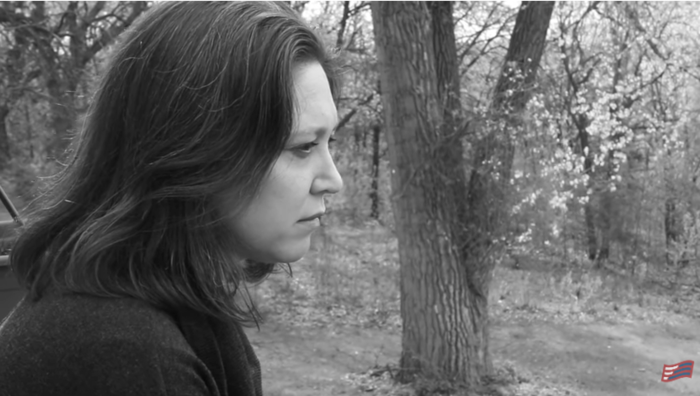 She spoke at the legislative hearing alongside Emily Zinos, an anti-LGBTQ activist who coordinates Ask Me First through the Minnesota Family Council. Before working with the Family Policy Alliance-affiliated organization, Zinos fought to keep Edwards’ daughterwho is transgenderfrom being treated in a manner consistent with her gender identity at a charter school in St. Paul.

Zinos, along with other parents at the school, brought in the Minnesota Family Council to host an “anti-trans propaganda night in the gymnasium,” Edwards claims.

The press coverage that event received outed their daughter in conservative publications like Breitbart and The Daily Signal. Edwards’ job history was posted by right-wing trolls on social media, some of whom called for his daughter to be “exterminated.”

“We try not to look at the comments, but we inevitably do,” he says in a phone interview. “Seeing people from all over our state post things about our child was terrifying. It was terrifying to look at their profiles and see them holding assault riflespeople who we wouldn’t want to know our names or anything about our family.”

But aside from right-wing backlash, Edwards claims Ives’ rhetoric largely hasn’t been received well in her home state. He says during her testimony at the Minnesota legislature, one lawmaker “told her to have thicker skin.”

“One of the Senators made fun of the fact that she was crying at this testimony,” he recalls.

What’s notable about Ives’ story is that in no version of the incident was she actually harmed by the person she encountered, as Edwards points out. There’s a reason for that: Of the more than 200 cities and municipalities which have introduced laws allowing trans people to use the public bathroom which corresponds with their gender identity, none has witnessed an outbreak in sexual assaults as a result.

In contrast, a 2013 survey found that trans people are more likely than any population to be victimized in public bathrooms. Seventy percent of respondents told UCLA’s The Williams Institute they had been harassed in a restroom facility. Nine percent had either been physically assaulted or forcibly removed from these spaces.

“It’s not about [Ives’] experience or trying to prevent harm,” Edwards says. “It’s about this bigotry they’re trying to find a way to justify. They’re using these women to paint this picture, but there isn’t really a problem.”

“They’re looking for a problem everywhere they go,” he adds.