Trystan Reese was watching a French talk show on which he’d recently appeared as a guest when the following words crept onto the screen, directly below his image:

His French was rusty, but hours of Duolingo lessons weren’t required to get the gist: Trystan, a trans father of three, had just been called a “mother” on Salut les Terriens!, a popular French television program reaching 1.5 million viewers per episode. 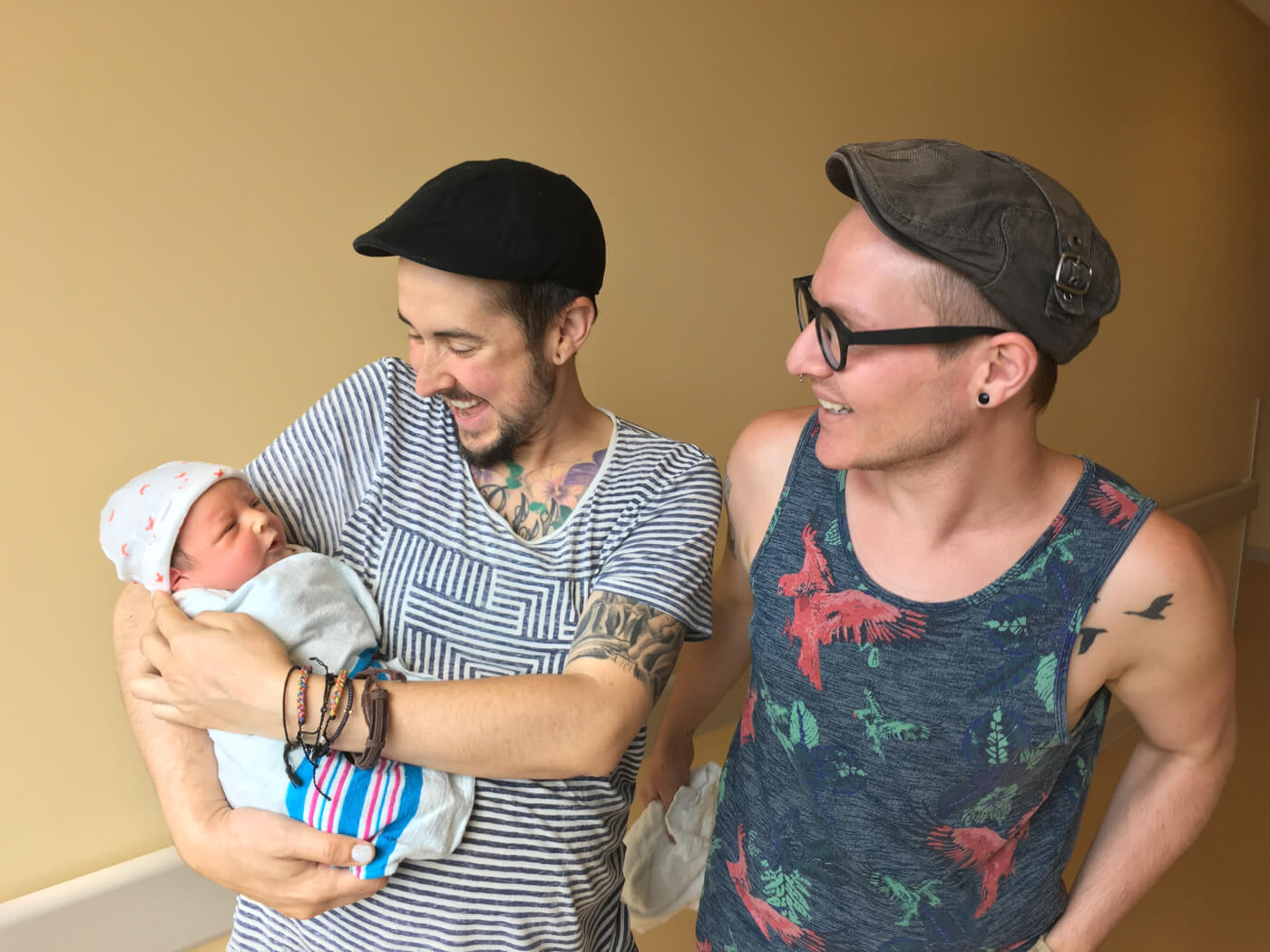 Trystan didn’t set out to become a spokesperson for trans parents. In fact, he never intended to be a dad at all.

Prior to August 2011, he and his husband, Biff Chaplow, who live in Portland, Oregon, spent their weekends attending queer brunches and flying to Vegas on a whim when they received a phone call that would forever change their fabulous, childless lives. Biff’s three-year-old niece and one-year-old nephew were about to be placed in foster care, they were told, unless the couple took the toddlers in.

“I was terrified about being a parent,” Trystan said, noting that he and Biff were just 27 and 25 respectively when the children first came to live with them. “I knew how to be a good uncle, but did I know how to be a good father?”

“Most people have time to adjust, learn, and process all of the things that come along with parenting,” said Biff. “We didn’t have that.”

Still, the couple adapted to their identities as dads. And before long, rather than consider fatherhood something foisted upon them, they realized they actually enjoyed their newfound family life. Several years later, the couple started making plans to bring yet another child into their fold.

Only this time, Trystan planned to carry the baby himself. 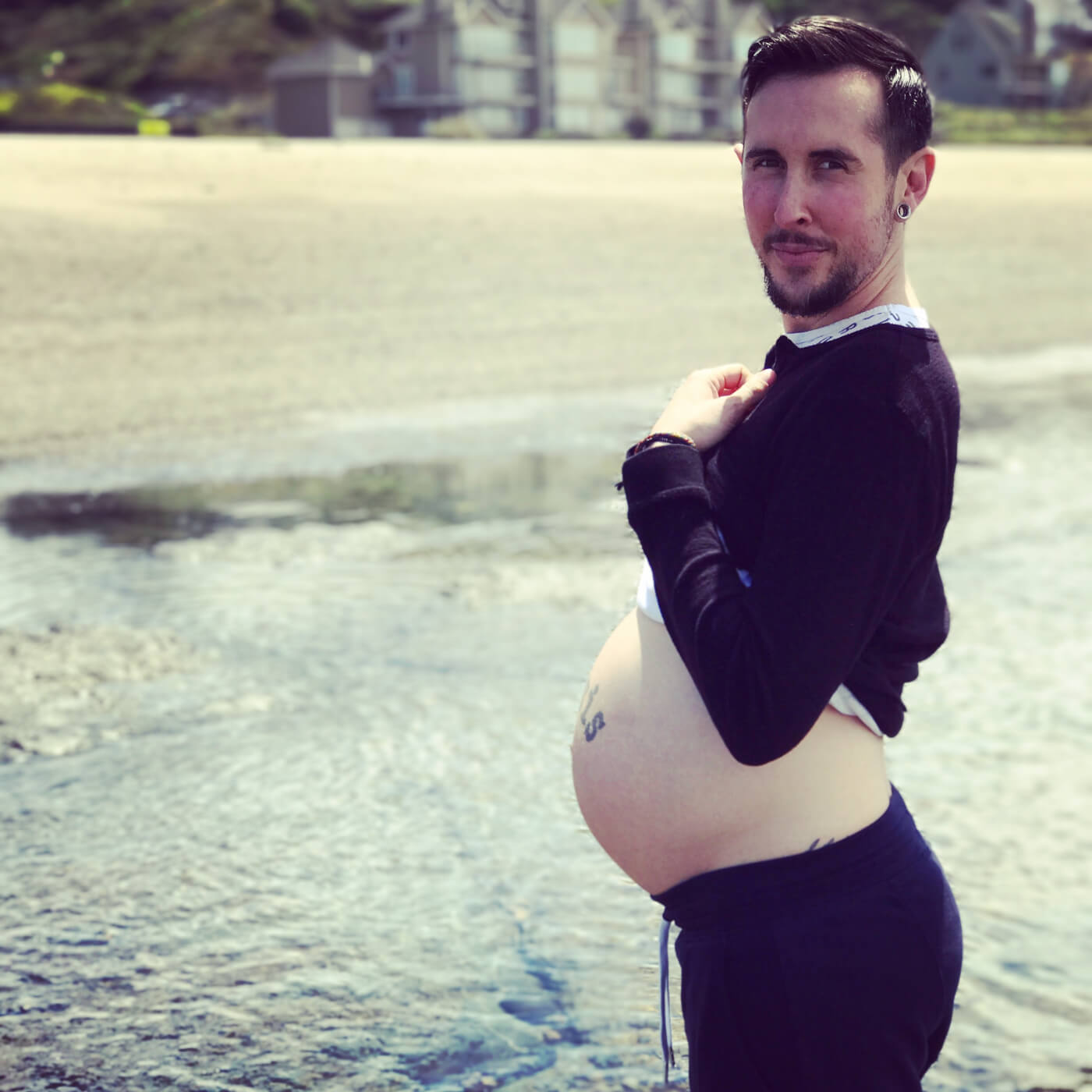 Trystan, whose healthy baby boy was born last July, is by no means the first trans man to become pregnant. He’s not even the first to be the subject of intense public scrutiny for doing so. He was genuinely surprised, then, by the media maelstrom that would end up following him.

It happened, quite literally, overnight. In May 2017, Trystan and Biff were featured on their favorite parenting podcast, WNYC’s The Longest Shortest Time. After hearing the segment, a reporter for Cosmopolitan magazine wrote a short piece on Trystan’s pregnancy, and published it that same day. The Daily Mail — the world’s most visited English-language news website — picked up the story that evening, and just like that, Trystan and Biff were giving cat compilation videos a run for their money as the Internet’s latest viral sensation.

In the months that followed, the couple found themselves fielding quote requests from outlets ranging from The Washington Post to People. As interest in his story snowballed, Trystan reached out to GLAAD, the LGBTQ media watchdog, for some public speaking training. By the time he was misgendered on Salut les Terriens! this past spring, then, he was far from a novice interviewee.

“If you freak out when a certain word is used, then you’ve just lost the chance to tell your story,” Trystan said of his perspective on the experience. “I see it as the media’s job to be curious, and my job to let them know when they’ve hit a boundary.”

Most outlets, he says, have been respectful when informed such a limit had been reached. Not so with Salut les Terriens! After emailing the show’s producers to request a correction for referring to him as a “mother,” Trystan says he was told not to “take offense,” and that “it wasn’t a big deal.” Following this dismissive response, Trystan took his request for an apology to Twitter, which resulted in the following flippant reply from the show’s host, Thierry Ardisson:

“Sorry, Trystan,” the message read in French. “I didn’t know the word ‘mom’ was an insult.”

“It was condescending, belittling, and purposefully misunderstanding of the critique,” Trystan said. “LGBTQ people are always perceived as so angry, we get tone policed all the time. But look what happens when you do things the right way?” 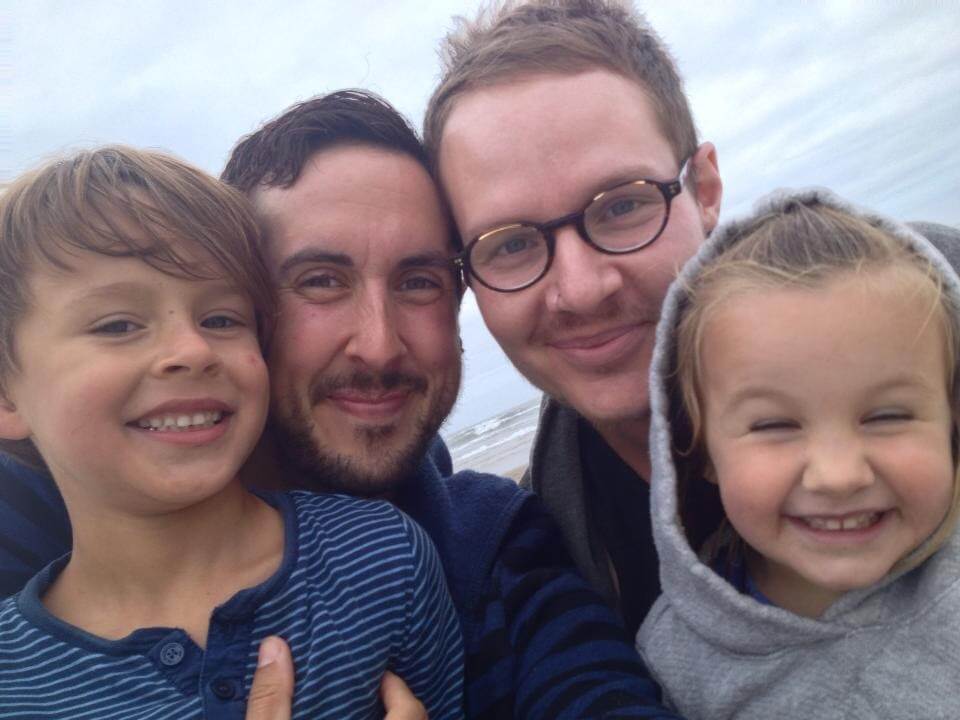 “The positive aspects have been amazing,” Trystan said, of his time in the national spotlight. “I’ve heard from members of the trans community all over the world who have said seeing our story has renewed their faith in their own ability to build a happy life for themselves.”

Trystan’s outspokenness has even led to a new professional opportunity. Earlier this year, his media appearances caught the attention of the national LGBTQ group, Family Equality Council, who encouraged him to apply for a job as the organization’s Director of Family Formation.

“I got an email from them out of the blue,” Trystan said, who has been working with the group now for six months. “It’s been a dream job.”

Despite these benefits, Trystan’s time in the limelight has also taken a toll.

“To put myself out there time and time again, for the education and amusement of straight people, is hard,” Trystan wrote in an Instagram post shortly following his appearance on the French talk show. “I know I signed up for this so there’s not much I can do about it now, but the constant performance is a bit like a death by a thousand cuts.”

Trystan does his best to avoid that particularly hateful corner of the Internet—the comment section—following every new media appearance. But some particularly dedicated trolls have taken to commenting on every single social media post he’s every made, dating back to 2015. He knows he can’t avoid the negativity completely, and he’s struggled, at times, not to internalize some of the more painful messages he’s received.

“People would talk about how disgusting I am, and how disgusting my body is,” Trystan said of some of the comments. “I had to go to Biff and say, ‘do you believe them? Does this make you see me as disgusting? He helped me see I was just being crazy, but those were some particularly painful conversations.”

Biff, for his part, has taken responsibility for monitoring the couple’s social media accounts to screen out some of the most hateful and violent posts—but the couple agrees that he shouldn’t weed out all of them. “Trystan wants to continue to reach more people,” he explained. “This is something he has to learn to process and deal with. It’s a problem that isn’t going to go away.” 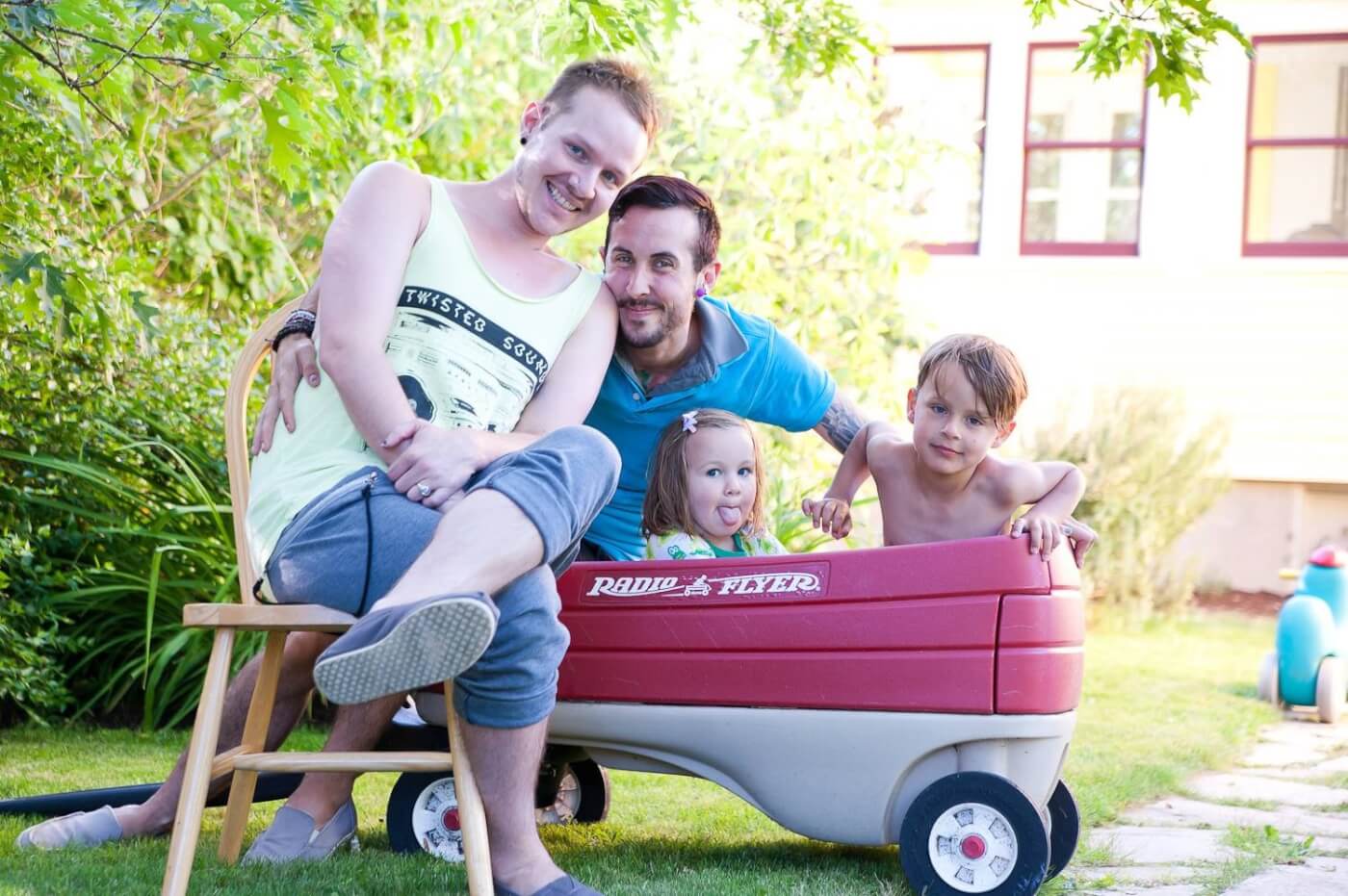 Trystan will likely never receive the apology he’s owed from the producers and host of Salut les Terriens! And as long as he stays in the public eye, reporters will continue to sensationalize his story. Internet trolls, no doubt, will hound him, wherever his story appears.

Given all this, an outside observer might reasonably wonder: why does Trystan continue to do this to himself?

“I do keep wanting to take a break,” Trystan admitted. “But I have a lot of privileges that other transgender people and families don’t have. Not everyone lives in Portland, or has a supportive family. I don’t think I’d forgive myself if I didn’t take this opportunity to open the door for people who come after me.”

So rather than retreat into the comfort of privacy, Trystan has instead learned to do something more difficult, but empowering: take control of his own narrative. He no longer agrees to every interview request, for instance, particularly if a given media outlet has a history of treating trans interviewees with disrespect.

Recently, when the producers of Piers Morgan Live offered to pay him and Biff to appear on their show, they declined on the spot, offering the following by way of explanation:

“Your host has a track record of sensationalizing, taking advantage of, and belittling transgender people,” Trystan said of his emailed response. “No matter how much money you’re offering, it won’t be enough.”

He’s even found a creative way to cope with trolls. Prior to a recent Facebook Live appearance, he posted a note to his account welcoming questions about his experience. But for any negative, violent, or hateful comment, he cautioned, he would donate $1 to Planned Parenthood. As a result, they received only one negative comment that day.

Trystan has also realized he doesn’t have to answer questions he finds inappropriate, off topic, or even those he simply doesn’t feel like answering. I witnessed this particular life lesson put to action during my own interview with Trystan, after I pushed for specific examples of some of the negative comments he’d received online.

As someone who has never walked a day in Trystan’s shoes, I did not, truthfully, know what he meant. But did I really need to understand in order to respect the boundary he’d just established?

“No problem,” I said, and we moved on to the next question.