The DJ was spinning a dance-mix of Belinda Carlisle in a mostly empty ballroom at the Embassy Suites in Olathe, Kansas. The room wasn’t empty for lack of enthusiasm; the doors had just opened, and I was one of the very first people there. By the time I grabbed a drink, almost all of the tables were already taken. I had to pull a table from the back wall—where it was covering part of a generator—just to find a place to set up. That’s how fast the room filled, and it kept filling for the next few hours.

The night may not have been quite the national “blue wave” Democrats were hoping for, but in the room, it was a flood. Nothing could stop it.

Why was there a torrent of bodies waiting to watch the election coverage of a Democrat in the middle of Kansas? In the days leading up to Nov. 6, the race didn’t quite get the national coverage it deserved, but a progressive bomb had been ticking the 3rd House District for weeks.

These people already knew it was about to go off. Because they knew Kansas deserves better. 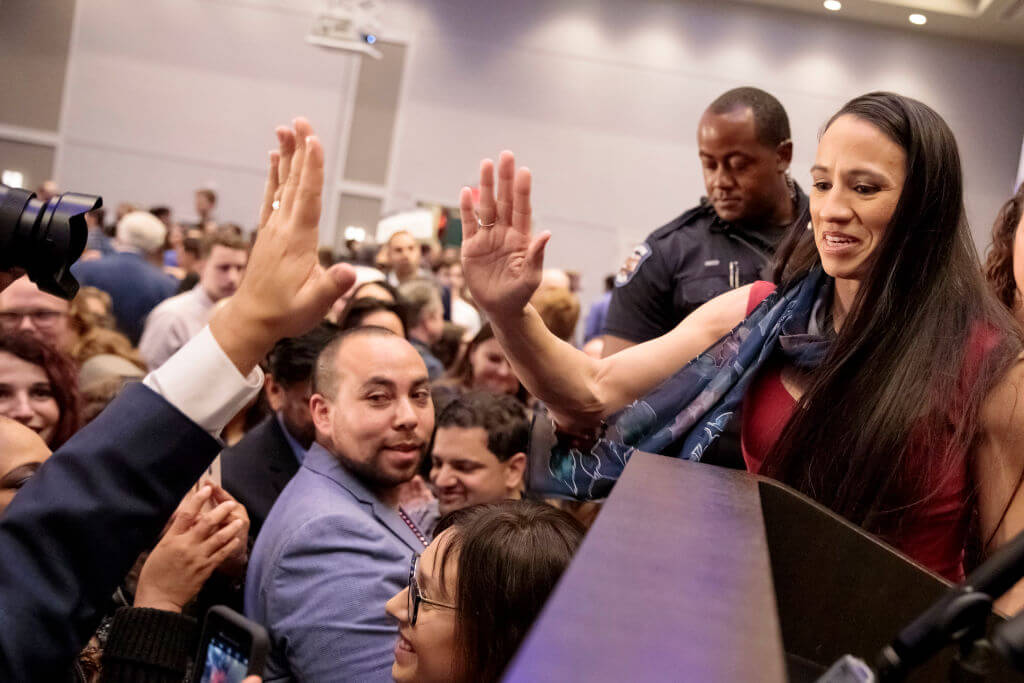 A few hours after I set up in a packed room, Sharice Davids would become the first queer woman of color to be elected to U.S. Congress. She’s also the first Native American to hold office in the federal government since Charles Curtis, a Kaw-Osage from Kansas, went from the U.S. Senate to serve as the vice president under Herbert Hoover. That was 89 years ago.

Davids boasts an unending list of firsts. A Ho-Chunk from Kansas, the 38-year-old is the third Native American female candidate for Congress this year. She served under the Obama administration, she’s worked as a corporate attorney, and she’s a mixed-martial arts fighter.

But as I drank my whiskey sour at the cash bar, the chaser was that Davids was about to embarrass one of the worst men in politics.

Kevin Yoder, the incumbent Republican, is what you see in your head when someone tells you to picture a Congressman from suburban Kansas. He’s funded almost entirely by NRA money and thinks the EPA is the biggest danger to America.

Kansas’ 3rd district just him kept electing him, though, and conventional wisdom would have predicted that he would take a fifth term in 2018. He had a truckload of money behind his reelection bid, as well as very enthusiastic support from Donald Trump after Yoder promised to help pledge $5 billion to the president’s long-promised border wall. For an area of Kansas dominated by economic anxiety and mega-churches, how could this go wrong?

The Democrats didn’t even throw their weight behind Davids at first. During the primaries, Bernie Sanders and Alexandra Ocasio-Cortez came out to Kansas to support a different Democrat, in what quickly became Ocasio-Cortez’s first stumble of her young career. The progressive rising star campaigned for Brent Welder, a labor attorney who served as a Sanders delegate in 2016. Davids beat him by 3.4 points.

But as Davids pulls nine points ahead of her Republican opponent, a series of questions hang in the air: Why didn’t America see her potential earlier? Did they just not want to believe Kansas could do better?

As Davids won, the audience watched the result on gigantic screens. We shouted at the top of our lungs. People cried and hugged strangers and didn’t let go. It happened so quickly. I thought we would be would waiting all night, but no—the result was decisive and swift. Davids trounced Yoder. Kansas was about to do better. 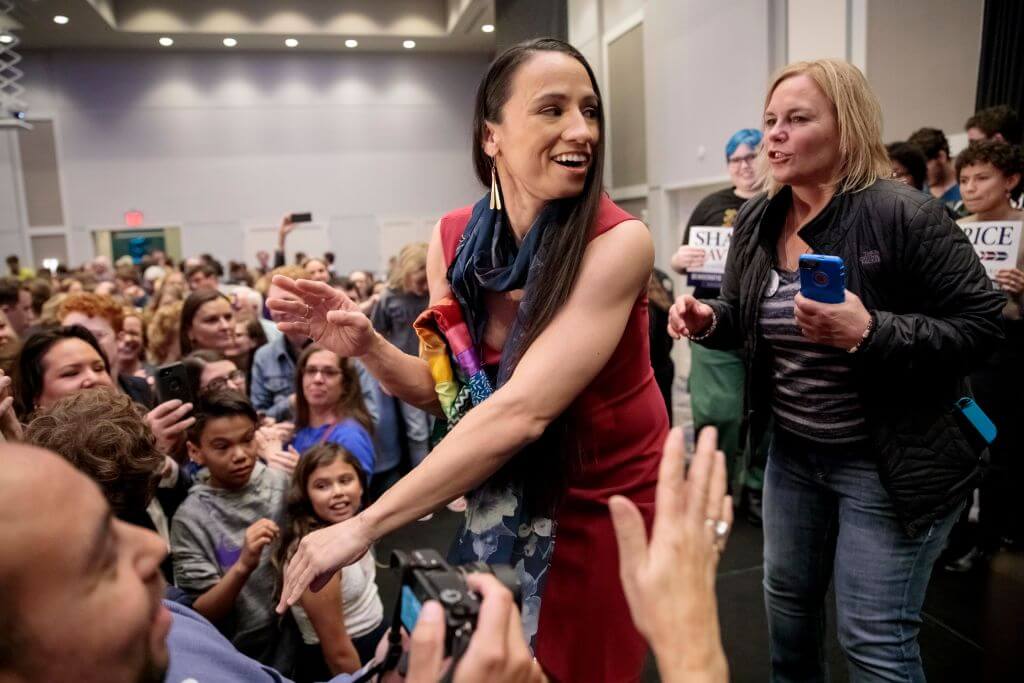 The conversations I had with supporters at her watch party showed that her LGBTQ constituents need her. Most wouldn’t talk on the record, because as much as we can celebrate Davids, not everyone is comfortable with their communities knowing that they’re here and that they’re LGBTQ. It’s an uncomfortable realization: Those celebrating this milestone are aware their families will not—or maybe even cannot — share their joy.

As I moved through the crowd and asked people what this meant for them, the most common thread was representation—whether LGBTQ people, women, or anyone who feels marginalized in red state America. “She actually represents the majority,” one woman told me. “More people are not Kevin Yoder types than are Kevin Yoder types, even in this area.”

The LGBTQ community in Kansas is a difficult thing to define. Lawrence, a college town tucked away in the northeast corner of the state, is home to one of the most queer-friendly colleges in the country: Kansas University. Young, progressive students helped Hillary Clinton win Douglas County by 34 points in 2016. But a few miles outside of Lawrence city limits, it’s all farmland. Neighboring Olathe, located along the border with Missouri, is rated one of the worst cities in the state for LGBTQ people to live.

Kansas 3rd District, which encompasses Kansas City, Overland Park, and the aforementioned Olathe, is an archipelago of blue in a red sea. But it is possible that something bigger is happening: not just a shift to LGBTQ inclusion but a return to the ideals many of her supporters were raised on — values they argue are actually bipartisan.

A woman, younger than me by 10 years, said the Kansas GOP wasn’t always the party of Kevin Yoder.

“I grew up in Central Kansas in a Republican party based on values and love,” she explained. “The modern Republican Party has no connection to the ideals or beliefs of Christianity that it pretends to align with. When something bends as far off the end, like Yoder, it’s pretty easy to see how much we need a correction.”

Early in the evening, I flagged down an employee with Planned Parenthood Great Plains, the regional hub for women’s reproductive health. She argued this race could signal a shift back in the other direction — toward a more inclusive Kansas.

“Kevin Yoder has never been an advocate for reproductive rights or healthcare as a basic right for Kansas,” said Rachel Sweet, the organization’s regional director of public policy. “This campaign knocked on so many doors, and it’s more people than I’ve ever seen being involved in progressive politics in Johnson County, Kansas. That’s power. What this community has built will outlast any one candidate or any one race.” 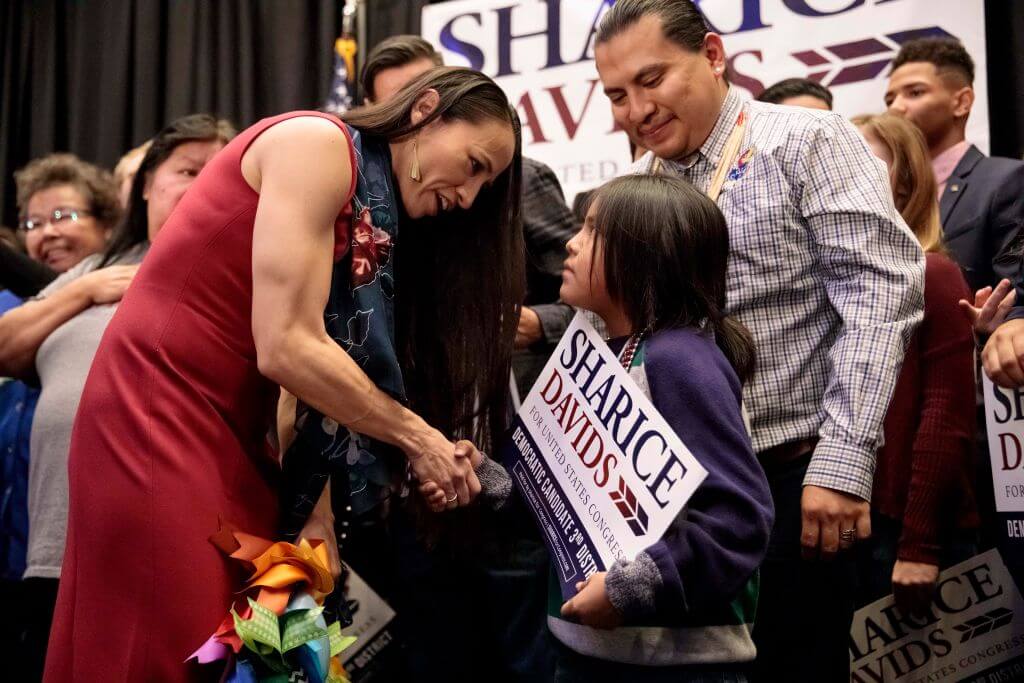 While we talked, a four-year-old girl ran past me dressed as a ballerina. It was her birthday party. She asked to celebrate it with Davids’ campaign. I don’t imagine any children wanted to have their birthday at Kevin Yoder’s watch party.

When Sharice Davids finally took the stage, it was pandemonium. A woman near me was shooting tears, practically firing them from her tear ducts; a group of strangers embraced her and began laughing together. A child next to me took photos from atop his mother’s shoulders. My partner and I tried to record the speech, but we kept breaking down in tears ourselves.

As someone who was raised in a small Kansas town, I believed that Davids could do this but I didn’t believe voters would let her. And on Tuesday night, the state moved forward in a way that so many other states did not. In Florida, Democrat Andrew Gillum was defeated by a politician who said voters shouldn’t “monkey this up” during the race. Ted Cruz beat a liberal darling to win a second term no one actually wanted. I’m proud of my birth state. I am proud of Davids for stepping up to the plate. But I’m equally proud that so many people here—from a straight white man to a lesbian with a shaved head—can all exist under the same tent.

Davids finally reached the microphone after hugging her way through the dozens of people on stage. They chanted her name until she told them not to: “I’m always telling you that you should chant ‘democracy’ instead.”

“This is the reset,” Davids said.

As Davids told the room that her victory represents a chance to move Kansas into the future, a broadcast of Yoder’s concession speech played 40 feet tall to the left of the stage. Davids could not see what was happening. Instead, she continued to explain how her job is to not just represent the people who voted for her but to represent all Kansans — including her opponents. She actually thanked Yoder for his years of service to a silent room; she is the epitome of class.

We do not deserve Sharice Davids, except that we do. Because enough people came out and did the work. 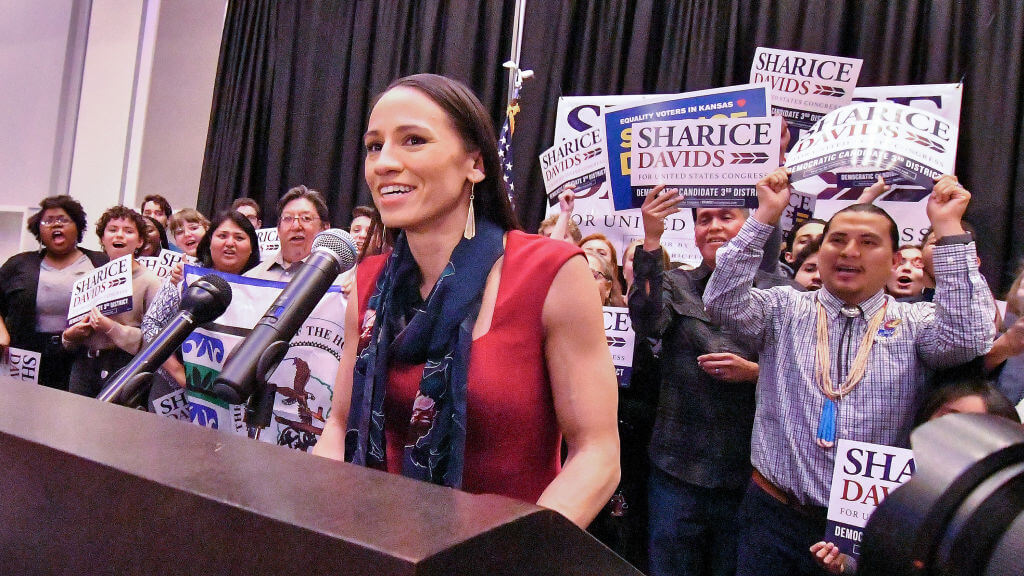 Davids closed her speech by reminding us of the state motto, which has perhaps never applied more than it does here: Ad Astra Per Aspera. The Latin phrase means “to the stars through difficulties.” I could barely type this without bursting into tears again. She lives the embodiment of what this state once meant, and what it hopes to mean again. She is the personification of everything that, in our most hopeful moment of contemplation, we might believe could exist.

Davids left the stage. The DJ returned to the party anthem of the evening. As a familiar pop played once more, I was stunned. I cannot believe what a bright day awaits us in January.

Ooh, baby, do you know what that’s worth?

Ooh, heaven is a place on earth