Two same-sex couples’ homes in Chicago were targeted this weekend in a series of graffiti attacks by white supremacists.

Jeff Zacharias and his husband, Bradd Easton, woke up on Sunday morning to discover that vandals blacked out a sign in his yard and spray painted “anti-white cuck” on a concrete walkway leading up to his home. The desecrated sign read, “Here we Believe Love is Love, No Human is Illegal, Black Lives Matter, Science is Real, Women’s Rights are Human Rights, Water is Life, Kindness is Everything.”

The couple, who lives in Lincoln Square with their 20-year-old daughter, says that what was shocking about the incident is that it was “out of character” for their community. Although the North Side neighborhood is predominantly white, Lincoln Square has a large Latino and black population. It’s a place where families, LGBTQ people, and immigrants intermingle.

“We didn’t believe it could happen to us,” Zacharias tells INTO. “It was a mixed bag of emotions that morning.”

After the couple called the police, the incident was quickly elevated to a hate crime. Zacharias was contacted this week by Chicago’s Human Rights Commission, who believes that the attack is a violation of their civil rights. It’s currently being investigated.

But their home wasn’t the only house on the block defaced by white supremacists. At least two other properties were vandalized, including a home belonging to Kat Hindmand and her wife, Jennie Brier. The couple, who have an eight-year-old son, discovered that the unidentified vandals tagged a “Hate Has No Home Here” sign. The message was printed in several languages.

Hindmand called the experience “sad and unsettling” an interview with Windy City Times, Chicago’s LGBTQ newspaper. The couple was unavailable prior to publication time.

These incidents are just the most recent in a wave of anti-LGBTQ graffiti attacks that have been reported since Trump’s January inauguration. Community centers in Oklahoma, California, Kansas, and New Jersey have all been targeted. A volunteer at Casa Ruby, a drop-in center for Washington D.C.’s trans community, was attacked in March when a man broke through the center’s front door and threatened to murder her. 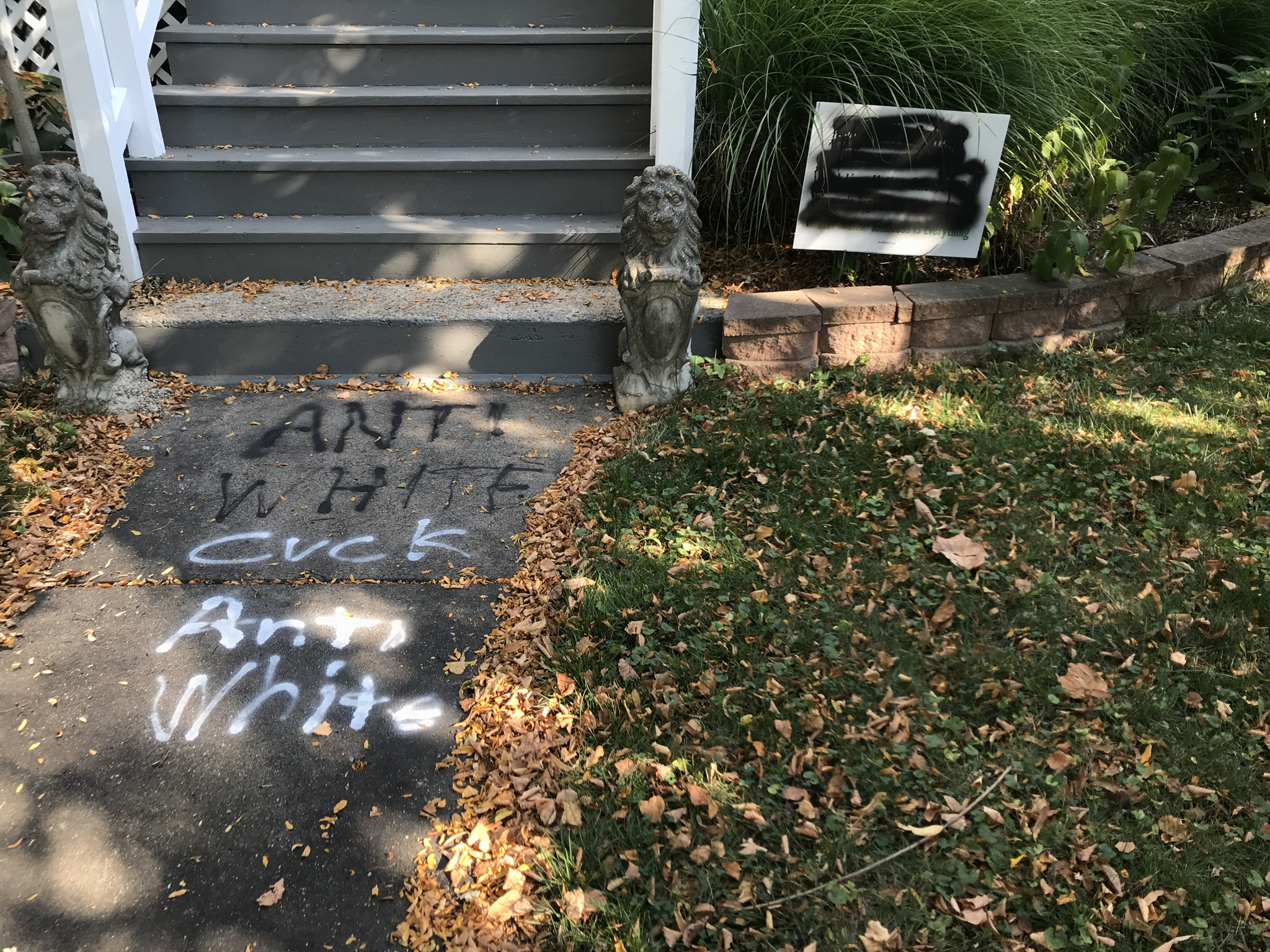 Zacharias claims these attacks are yet another illustration of how the forces of hate have become “emboldened” by the current administration, which hassteadily rolled back LGBTQ rights.

“These ways of thinking have always been present,” he says. “There have always been bigots, racists, and homophobes. But up until recent times, they haven’t felt like they had the platform to say anything they like, particularly in a city like Chicago that’s so racially diverse and liberal leaning.”

Lincoln Square has been the site ofseveral white supremacist incidents this year. Community members held a rally in August after messages like “Make Weimar Great Again” and “You Will Not Replace Us” were found on sidewalks and garages.

The 50-year-old psychotherapist and addiction counselor says that a neighborhood that once felt “safe” suddenly feels like anything but.

Before he went to bed Sunday evening, Zacharias double-checked the locks and left the lights on, which he says he’s never done in the 10 years they have lived there. The couple have discussed getting a security camera and alarm system. When they take their dog for a walk, Zacharias and Easton are hyper-aware of their surroundings, afraid of what could happen next. What if someone throws a rock through their window or fires a bullet into their home?

Neighbors, though, have come out in firm support of the coupleleaving flowers on the doorstep and notes in their mailbox. People that Zacharias has never even talked to have come up to say that the community stands with their family.

Zacharias says he won’t let fear keep him from fighting back.

“I’m not going to stop talking about it,” he claims. “I want people to know what hate looks like. If we don’t speak out, they win by silencing us.”