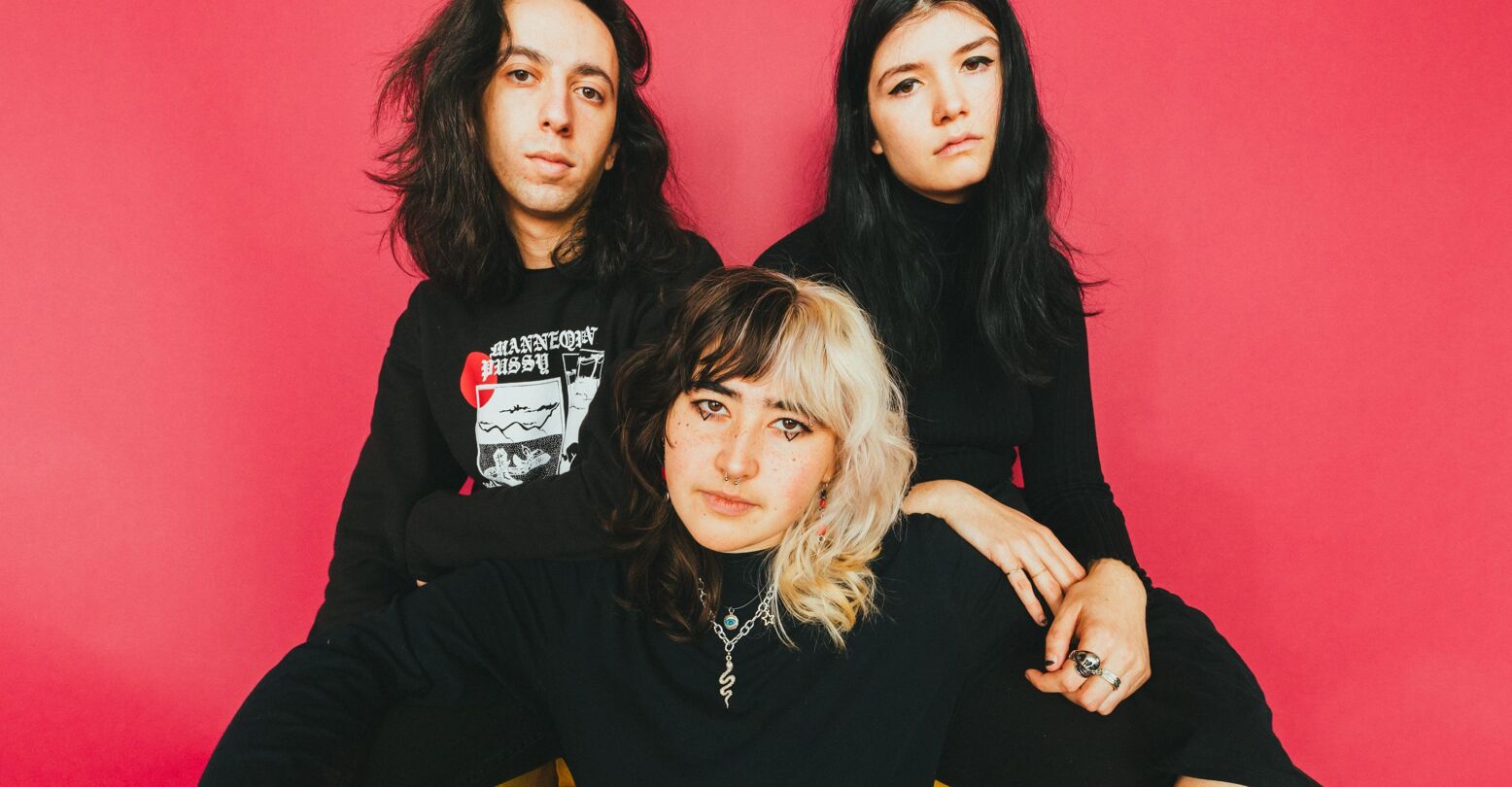 “Destroy Boys” is the poster child for modern punk. Its three members — frontperson Alexia Roditis, guitarist Violet “Vi” Mayugba and drummer Narsai Malik — create personal, visceral music with a one-of-a-kind point of view. Their third album, “Open Mouth, Open Heart,” drops on October 8, just before they embark on a U.S. tour. INTO sat down with Roditis to discuss how “Destroy Boys” tackles queerness, identity and pain, all through a punk rock lens.

INTO: How would you describe “Destroy Boys” to somebody who had never heard of you? What’s your sales pitch?

ALEXIA RODITIS: I’m usually like, “Oh, yeah, we’re a rock band, ‘garage rock’” — and I do the air quotes around “garage rock”— punk influence, but also all different kinds of influences. It’s getting a little further away from that now.

INTO: You say you’re getting further away — what are you moving toward instead?

RODITIS: We’re moving toward more dynamic music. I think that you can hear that in our latest releases, especially “Drink.” I play guitar most of the time now, so we have more flexibility in that realm. We’re older, and so we’ve matured and can just write better songs. So it’s becoming more dynamic, more thought-out, less straightforward punk — which I still love! But I also like playing more complex music.

INTO: So, you have a new album coming soon called “Open Mouth, Open Heart.” How is it different from your previous music?

RODITIS: This album is just a lot more dynamic. There’s more guitars and leads — like, I play something, Vi plays something different, which is cool. It has a wide range of genres and types of songs: there’s a sort of metal-y song, we have that acoustic song, we have more mid-tempo Nirvana bangers, we have a political punk song. So it’s different in that everything that we put out, I feel like, sounds different than what it was but is still like a version of that. Like, we have children and they’re the same but look different, you know — like cousins.

INTO: And what themes does the album focus on?

RODITIS: Well, mostly pain. I kind of originally wanted to name the album “Pain”, because every single song is about some sort of hurt, or some sort of grief that one has about a situation. And I mean, “Destroy Boys,” our entire discography is, like, sad trauma music. Woo!

INTO: “Pain” would’ve been a great title, but obviously, you ended up going with a different name. So how did you land on “Open Mouth, Open Heart”?

RODITIS: It’s the last lyric on the album. And I really liked the name, I thought it sounded cool. And I feel like, you know, the album is about being hurt. And if you talk about it — having an open mouth — I feel like that allows you to have more of an open heart, which is sort of what the album is doing.

INTO: I can’t wait to hear the full thing. I will say, my favorite single so far is “Drink” — “All This Love” is great too.

I originally wanted to name the album “Pain”, because every single song is about some sort of hurt, or some sort of grief

INTO: What do you think? Which single is your favorite?

RODITIS: I feel like mine is also “Drink.” It’s such a banger. That song is very specific to me — I mean, they all are. I actually listened to it last night, because I was upset about, like, alcoholism. I listened to it, and I was like, “AHHHH!” You know? Because I needed something to listen to that spoke to my situation.

INTO: That must be so weird, to have a whole discography of songs that you can so directly relate to. The whole thing with music is everyone is trying to find the songs that speak to them the most, and you just have this whole catalog.

RODITIS: Yeah, literally! That’s the whole thing, is that when I joke about “Destroy Boys” being trauma music, like, it is, and it’s ours. [laughs] I’ve been writing songs for a long time that way, like, “I want a song for this situation. I don’t know where that song is. I’m going to write that song and have it.” Life is so specific to you. But then it’s funny how all the songs are very specific to me, but then people can relate to them in so many different ways.

As I get older, the older songs don’t resonate as much. I’m glad they don’t! It’d be something to look into if they did.

RODITIS: I’m Argentinian — my dad’s from Argentina. And I speak Spanish; it’s a part of my life. And I just wanted to write a rock song in Spanish, you know? One of them is a bolero, which is literally just acoustic guitar and vocals. Boleros can have a lot more instruments in them, but that’s what this one is.

And then “Te llevo conmigo” is about my family. My deceased family and my current family and stuff like that. It’s just important to me to include as many people as I can with our music. I just wanted to write a sick Spanish rock song — and it’s not the last one, like, there will definitely be more — but I just thought it’d be cool. I thought it’d be sick. And we have so many fans from Mexico, Central America, Latin America, lots of Spanish-speaking people. I just really wanted to make music for them as well.

INTO: It’s amazing to see your heritage manifest in your music. How do you think other parts of your identity, like your queerness, come through in your art?

RODITIS: It’s kind of interesting, because when you’re a queer person, I feel like it can influence a lot of what you do just by being that, if that makes sense. I write songs based on my experiences — I didn’t write all the lyrics for all the songs, but I wrote the majority of them. And I wouldn’t have those experiences, I wouldn’t process them in the same way, if I wasn’t bi, queer, whatever, nonbinary.

INTO: As far as the statement, “I don’t know if that’s a queer thing” — I feel like anything I do when I’m queer is a queer thing!