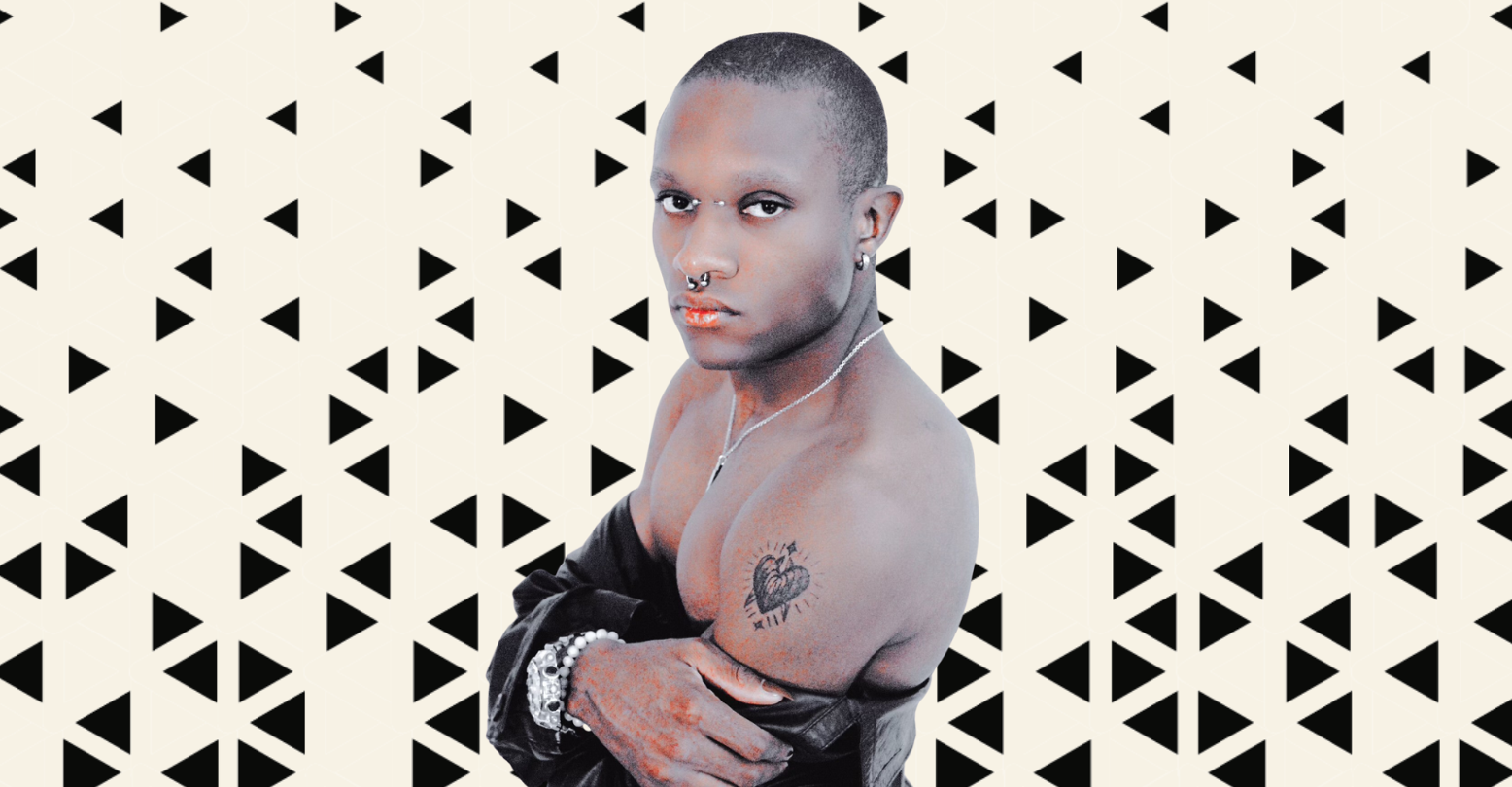 A musical renaissance is afoot and with this ushering in of new music comes new perspectives within all genres of music, punk and alternative included. But artist SAIAH (they/them) knows this all too well. Pronounced say-uh, the Black, queer, nonbinary artist is a vessel for so many musical genres. From rap to hyperpop to lo-fi indie rock to punk rock, SAIAH’s musical tastes know no bounds.

When you listen to their EPs Nonbinary, honest red, and Loveboyraceway Lostboy, you find an artist who casually shifts between musical genres as easily as they switch between rapping and singing. With sounds and lyrics clearly influenced by Tame Impala, Frank Ocean, and new millennium pop-rock, their debut album RACEWAY: THE WISDOM OF INSECURITY showed a more intense observation of themselves and the world.

Now, with their latest single 5 minutes till dawn, they’re following what feels right and rightfully taking up space in the punk rock and alternative scene. INTO spoke with the up-and-coming artist about their latest single, their musical influences, and their dream collaborations.

INTO: With your mom being an Olympian and you coming from a strong athletic background, what brought you down the path of music?

SAIAH: So, I’ve always liked music when I was growing up, like Gwen Stefani and Michael Jackson and pop stars of the era. I just love that stuff. And I would always have my sister burn CDs from me, and she would burn a bunch of songs that she liked. So, my sister was, like, one of the main people that actually put me on to it.

I would constantly sing the songs that I learned when I was, like, seven or eight. It felt like it was, like, my only peace. It was a huge thing growing up. Everybody in my family loves music, especially my mom. Even on both sides of my family, there are a lot of musicians. I have my cousins that I actually started making music with when I was 14 and we would just sit in the room and just record on this little mic that I got from one of my friends from school. And we would just make songs that did not make any sense on YouTube.

I just love things that make me feel good because life is sometimes hard and I don’t really care what anybody thinks about what I like. I like Jaden, I like Sophie, I like 100 gecs.  I like a lot of things and a lot of things which make me happy.

One day, I was at the Boys and Girls Club, and I was like, rapping to “6 Foot 7 Foot” by Lil’ Wayne and I asked my cousin, “can I record it in your basement?”. And he let me record the song in his basement. And that was the first song I ever recorded.

You have such an eclectic taste in music. Where do your musical influences come from?

I’m a very impressionable person and every single thing that I listen to inspires me. I just love finding new things that inspire me because I feel like I gain a lot of motivation, some things that make me feel well. And I used to love Tame Impala growing up. And then one of my biggest inspirations in this whole world is probably, because he is a chameleon too… I just love Frank Ocean so much. It’s just like the way he lives his life and what he does. Also, I love Kid Cudi because he’s also a chameleon.

And I just love things that make me feel good because life is sometimes hard and I don’t really care what anybody thinks about what I like. I like Jaden, I like Sophie, I like 100 gecs.  I like a lot of things and a lot of things which make me happy. I find myself stuck on the lo-fi, indie rock playlists on YouTube as well because you never know what you find with that.

I just love everything. I love music. And I love the art of making music. I feel like when I hear somebody actually take the time and is very intentional about it, you’re going to feel inspiration in the intention that every artist wants to put out.

Speaking of inspiration, what was yours behind your latest track “5 minutes til dawn”?

So I was in Malibu for my first ever music camp, and I was just, like, going through it with one of my producers. And this is kind of hard to talk about, but it was just basically like, this producer was telling me that the music that I made with him was only going to be good if I made it with him. And basically, I got stuck in that mindset. It’s like being afraid of putting something out. And around that time, there were a lot of people going to the studio sessions.

And then there was another session going on in another room. So, I was bouncing back and forth, and I was just like, “I’m so tired”. And basically with the hook is like, I feel better alone, I just was like, “I would rather just do this alone”. And basically it’s just me talking about the relationship that was ending at the time and also all the relationships around me that were ending as well. And then also being okay with being alone and also being at peace with it.

How does it feel to be a part of this latest generation of Black queer artists making music?

It’s amazing. I’m a Leo, but I have a Pisces rising and Libra moon. So at the same time, I’m very just, like, emotional, and I just stick to myself a lot. But it is amazing because I’ve met a lot of beautiful people, and I’ve never experienced love in such a way before. It’s very welcoming and it has been an amazing experience to be around people that make me feel safe and make me feel welcome. And I just love it. Especially the scene in Los Angeles. I’ve met a lot of cool people.

What does a dream collaboration look like for you?

That’s a good question. I really do want to work with Dreamer Isioma. I really love Dreamer. I love carpetgarden. We’re actually working on a song right now. I just really hope it comes out the way we think it’s going to come out. Really want to work with Raveena.

Oh, my gosh. I know this is a long shot, but one day, I really want to have this Frank Ocean session. I really want to manifest that. Just us playing guitars and then hopefully making a song. That would be so crazy.

Sarah Kinsley is so amazing. Also, Tei Shi is so cool. I want to work with Dev Hynes from Blood Orange. This is a big question because so many people come to mind. Honestly, the few people that I just said I really want to work with at this moment. I like to not spread my energy too thin because I’m very impressionable, like I said. So I get very afraid to work with a bunch of new artists.

Now that you have multiple EPs, an album out, “5 minutes till dawn” is out, what do you hope to achieve with your musical career?

I have so many answers to that question. I want to be able to just help people that are in need. My mom, she has MS and the last couple of weeks have been really hard because her MS is getting worse. But she also got Covid and she also was going through a lot of stuff spiritually. So, it was really hard to deal with and I was trying to be there for her. There should be more studies on treatment and on certain aspects of MS, because people really don’t understand it. There’s no cure for it.

Just seeing her go through a divorce and the sickness itself has been so hard because it’s really hard to help a person like that. And there should be things in place where they could help. I don’t know if there is, honestly, I haven’t done all my research, but I want to be able to help in that area. I want to be able to give out funding for research and funding for charities and stuff like that. That’s honestly what I really want to do. I may not be able to do it now, but one day.

That was the first one to pop in my head. There’s so many other ones, but I really wanted to say that one because I don’t know, it has been impacting my whole career right now.♦