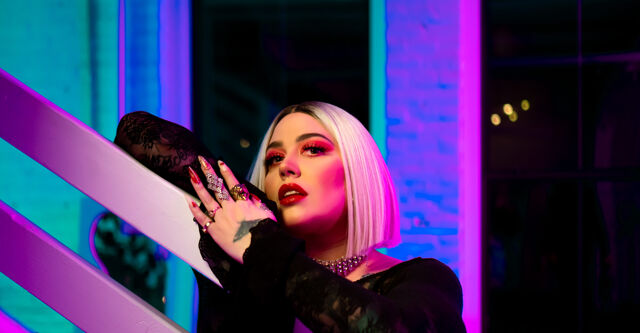 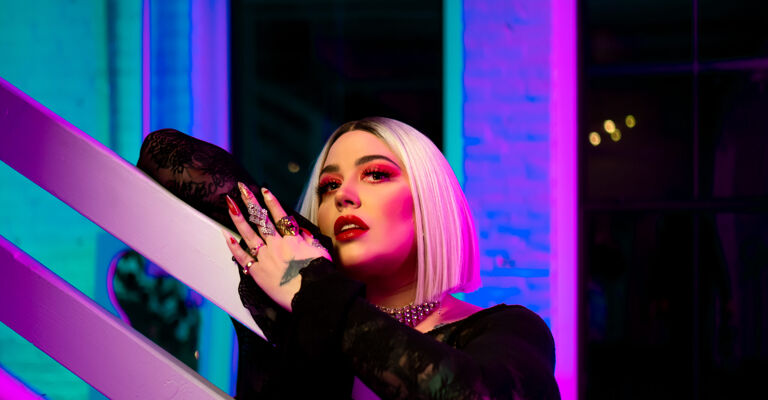 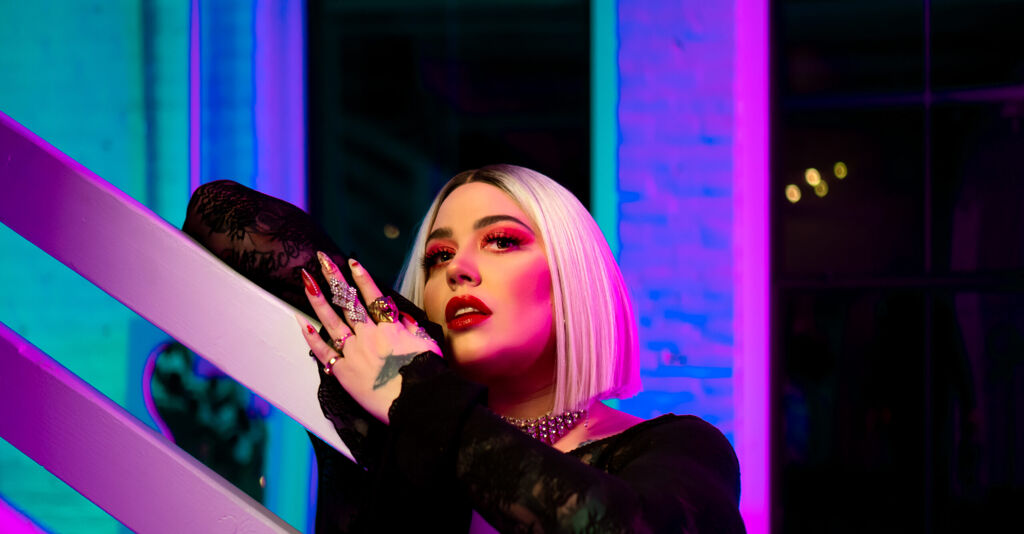 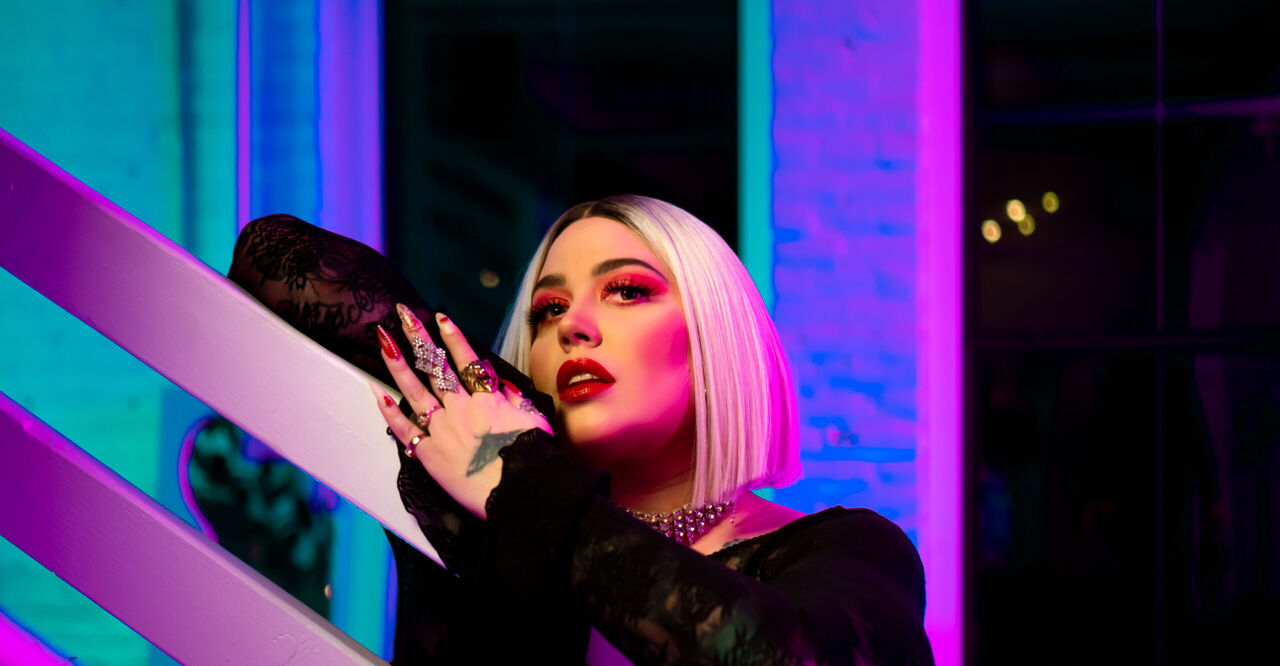 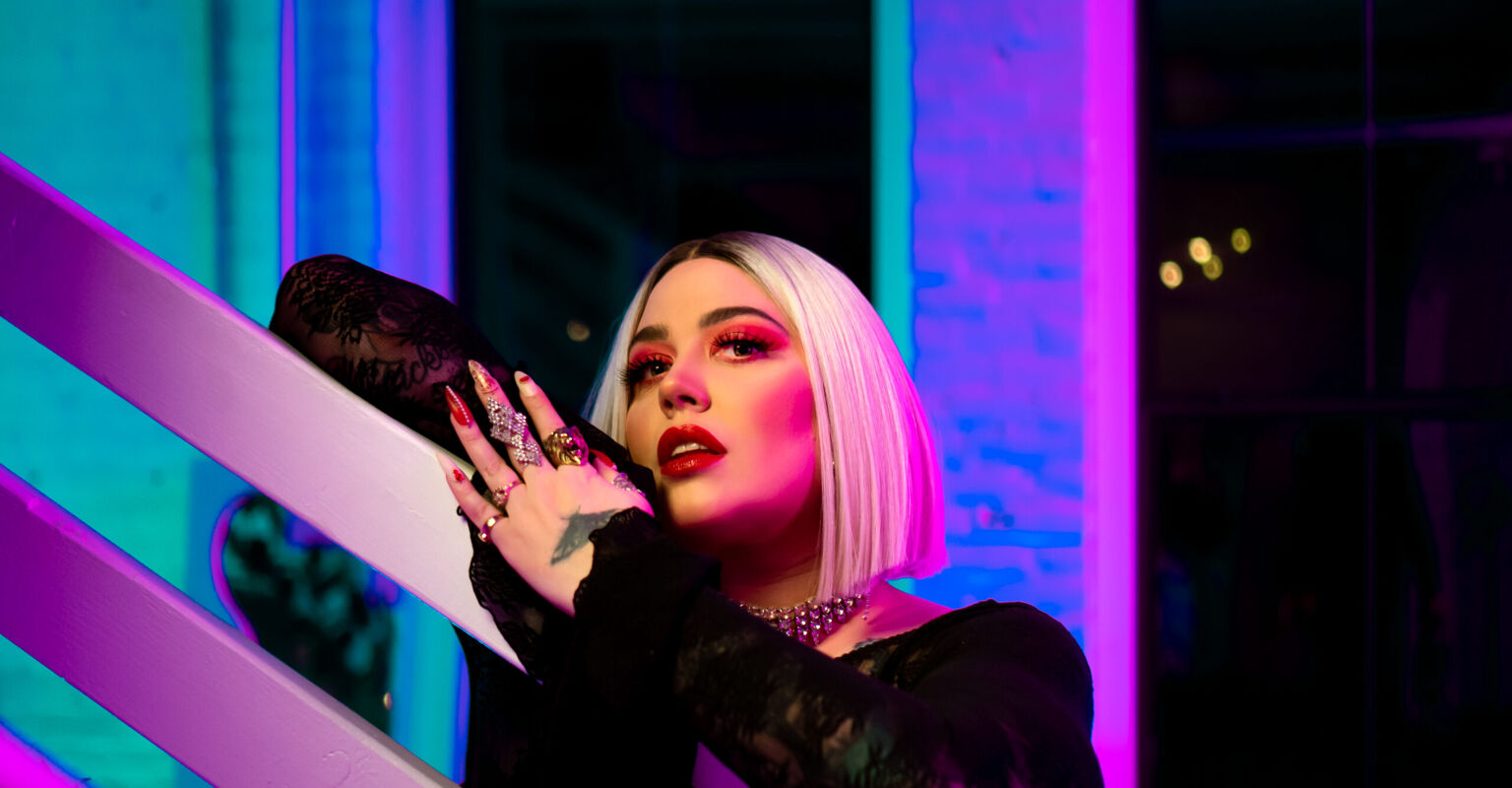 It’s right there in her name: Chayla Hope is all about hope. The up-and-coming pop singer made a name for herself in Cleveland’s music scene, and now she’s ramping up for the release of her debut LP “Damn, Feelings” in late 2022. She’s just released the album’s second single “Falling,” a dark pop anthem about attraction and intoxication. INTO sat down with Hope to talk about the many twists and turns of her career, from working as a drag performer to singing for Care Bears and taking on the music industry.

INTO: First things first, could you share your name and pronouns?

Love it! Got the whole sales pitch. Speaking of sales pitches, how would you sum up your musical style?

So not Cher or Celine Dion, but Cher doing an impression of Celine Dion.

Yeah! I sing with my whole body, and I really want people to feel included in everything that I do. So I try to just bring them all in and make them feel welcomed.

Gorgeous! So, let’s talk about your newest single, “Falling,” which came out just in time for the end of Pride Month. Very exciting. How did the song come to be?

So yeah, I was in the studio for nine months, four days a week, eight hours a day. And this was one of my favorite songs to do.

Is it true that “Falling” was partially influenced by your past as a drag performer?

Yes! I was a drag king and bio queen at Bounce Nightclub in Cleveland at the same time I was a machinist. So I was machining and then going straight to Bounce and performing at night. I was one of the first women on Saturday nights to perform as myself, and it felt amazing. That really brought about my personality, who I am, who I’m not afraid to be anymore. It took a long time to get there.

That place really is the reason I’m here at all. Just having those connections, being able to show up in a full sequin outfit and not have somebody just look you up and down like you’re a piece of trash. You know? That’s where I felt my most open and my most whole. I really wanted something people could vamp to and just have the best time to, and this was my way of bringing it out.

I have to ask: did you have a drag name?

Oh, I did. I was Hope Arcade and Nick Tendo. ‘Cause I’m a gamer.

Obsessed. So, “Falling” is the second single off your upcoming LP, following “Love In Lo-Fi,” which is also a bop. How would you describe the general vibe of this era in your music?

Ooh, we’re going for ‘80s. We’re going for ‘90s. I’m really in love with Robyn, so there’s a lot of that in there — I’m freaking obsessed with her. I was also listening to so much Christine and the Queens. Major crush, major crush.

I really wanted to reference every kind of pop that there is. I wanted to make it really unique and different, pour my heart out on some songs and just have fun on others. That’s why I named it “Damn, Feelings” — it’s working through all these relationships and all these issues. Yeah, I would say not afraid to reference or not reference.

Sh*t on it, put it in a blender, vomit on it. And how do you hope listeners feel after putting on your music?

Hopeful. I’m older. I’ve been trying to do this for a very long time. And the music industry has a really hard time with women who are just in their 30s trying to live life. So I really want people to feel like, “I can fucking do that too. You know what? I can wake up, put on ridiculous earrings if I want, walk out the door and sing my fucking music and show the world that it can happen.”

It must be intimidating, the music industry being so weirdly obsessed with youth.

Damn right! And up to now, your career has taken you to plenty of unexpected places, including doing lots of vocals for the Care Bears franchise. How did you get involved with that world?

It was absolutely crazy. I got a call from my producer saying, “I’ve got this guy. He writes for Care Bears: Unlock the Magic. He’s looking for somebody to sing this one song that’s going to be in a toy and on the cartoon — would you want to try out?” And I was like, “Absolutely. I’m in.”

So I came in, and right before I got there, he goes, “I think he’s gonna want you to try the theme song as well.” And I was like, “Oh my god! What am I gonna do?” I didn’t even know the song yet. But I did it. And I beat out MC Hammer for the part.

Add it to your resume: “Better than MC Hammer at singing this one song.”

I got to hear his version as well! That was really funny. Yeah, I sang that theme song, I’m in a Care Bears toy, and I’ve done over two dozen songs for them so far. Crazy.

How do you feel like your work on Care Bears fits into your image?

It’s insanely difficult just to walk through a day as yourself. No matter who you are. I really feel like Care Bears is a very open-arms community, and it’s really cool to teach children that it’s okay to be yourself, because I feel like that’s the only way to go through life.

Absolutely. So, what’s next for you?

I have a show on July 22, on a rooftop while the sun is setting, and that will be when my next single comes out. Instead of making a regular music video, we’re going to be donating the budget that my label gave me to different animal rescues in the area. We’re actually trying to get all the cats neutered in Pittsburgh — I don’t know if that’s gonna happen. That might be out of my range. But at least if I can get a few, I’d be so happy.

We have six or seven singles before the album actually drops in October. Fun fact: I used to press vinyl records, so I get to go back to my old job and actually press my own record. That’ll be fun.

Very full-circle. And I love that you’re doing good with your music — why is animal welfare so important to you?

I’m just so connected. My one-eyed puggle, who’s a rescue, is sleeping behind me. My grandmother was the same way. She took care of all the stray cats in her neighborhood, like, she was the cat lady. And I’ve just always had such a connection. They’re innocent, and they’re lovely, and people don’t treat them that way. I really would like to get some awareness out there if I can. ♦

“Falling” is now streaming on all platforms.