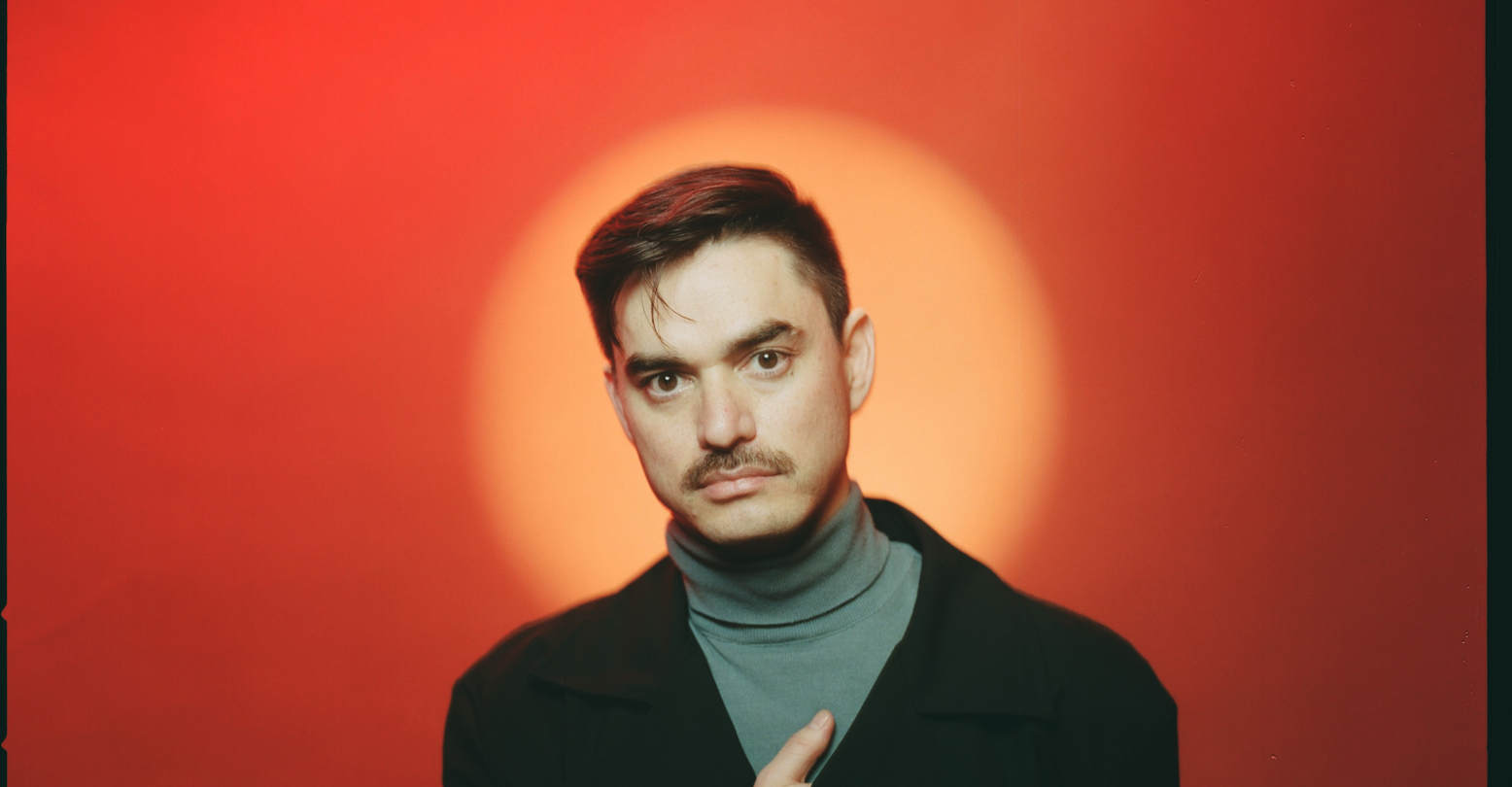 The pandemic marked a major turning point in all of our lives. For multidisciplinary musician K.C. Maloney, it meant the discovery of an entirely new persona. Taking inspiration from the singer-songwriters that shaped his childhood, Maloney ditched his identity as the indie-electronic Adult Karate and took on a new moniker: The Eaton Wash, leaning into his folk-pop side for the first time in his musical career. Now, The Eaton Wash is putting out his debut album, “Stay Around,” a sweeping exploration of mental health and identity.

INTO sat down with Maloney to learn what inspired him to craft a new persona, how music helps him process unwieldy emotions, and how his existentialism pisses off his husband.

INTO: Hi K.C.! What influenced your decision to make the switch from Adult Karate to The Eaton Wash?

MALONEY: I started working on this album over a year and a half ago. I was working on it as if it was going to be an Adult Karate album, even though the first song I worked on was wildly different from anything I’ve ever done. But on the last Adult Karate album, there’s a song called “Euphoria,” which is very guitar, indie pop. It was not like anything else I had done, and I gained a lot of new fans because of that. But then existing fans were like, “Yeah, that’s fine, but not really what I like from you.”

In the end, the album became so far in this other direction that I was like, “It might be kind of fun and a challenge to start from scratch again.” It’s exciting to do that — with Adult Karate, it took years to get just a decent amount of success in the music industry. It’s really hard. But the successes that do come along are so exciting when it happens, because nothing ever happens. So maybe it’s a little bit of that. I don’t know, it’s like I made up my mind, and then I just kept going and didn’t think about it again. That’s kind of how I do things.

And how are you feeling now that you’re putting out music under this new name?

Oh, it’s exciting. It’s the same fears I had before I ever put up music: Are people going to hate it? Are people going to laugh at it? Those kinds of things are the fears in the back of my head. But I’m a bit older now than when I started in music, and I care about what people think a lot less.

I think for artists that are independent and depend on social media, it can be just so nerve-wracking. One of the things I embraced without planning on it with The Eaton Wash is just being like, “Boom, this is what it is. I’m not gonna sit here and worry about this, this, this, and this,” because it doesn’t matter in the end. And just because only this many people listen to this song or reacted to it does not mean anything in the end. That means nothing in terms of long-term success of music or art or anything like that. I guess I’m just trying to draw outside of the lines while working inside of the lines, if that makes sense.

Totally. Making art for yourself. Speaking of, let’s get into your lead single, “Interrupted Sweatshirt.” What’s the meaning behind the song?

“Interrupted Sweatshirt” turned out to be about mortality. I think the pandemic and the state of the world in the past several years has just been horrible. And it’s gotten a lot of people thinking about mortality and one’s own mortality. As I get older, I just have more and more questions about the nature of reality and death. What’s the point of all of this and will we ever know? No, we probably won’t ever know why. Just this kind of frustration over the unknown, and frustration over the unknown that has been unknown since the beginning of humans. It’s this kind of primal frustration with existence.

It was a frustrating song to write because it was like trying to grab onto something. And there’s actually a quote that I came up with while writing that song that I hid somewhere on the album as a voice sample. It says, “I tried to embrace the nothingness, but there’s nothing there to embrace.” So that’s the kind of heady meaning to that song, is that I have this passion and love that I want to burst out of me, but I don’t know where to direct it towards. I need more answers, basically, before I can feel okay just going about my day and not thinking about the consequences of things or where I might end up or the existence of God or all this stuff.

My husband hates when I start to go off on these tangents. He’ll just be like, “Oh, God, not this.” But he secretly likes it.

The good news is you can just channel that annoyance into the music! Beyond mortality, what other themes are you exploring on the album?

Lots of mental health issues were coming up. I was definitely using the songs as a way to process troubling emotions at the time. I mean, I’ve always done that with music, but this record was written and recorded almost entirely during quarantine time. I was lucky enough to have my husband and my cats, but still, every day was another psychological onslaught that you have to deal with. I’m not always great about expressing those feelings — I have no problem telling you or my therapist or strangers about this stuff, but if it’s people in my life, I don’t know.

“I have this passion and love that I want to burst out of me, but I don’t know where to direct it towards.”

But yeah, it’s just been a way for me to deal with emotions like depression, which I’ve been struggling with since I was a kid, and anxiety, and try to make what’s going on in the world and around me okay, or as okay as it’s gonna get at now. Things are really bad right now. Lots of people are dying, everybody’s fighting. But I do feel like I’m contributing something to the world, to the universe by writing music and maybe reaching that person that’s going to those same things.

How do you hope people feel after listening to “Stay Around”?

I wrote about these themes in Adult Karate, too. And I’ve gotten messages from fans telling me how much this line or this lyric meant to them. They’re telling me about the personal struggles they’re going through in their life, and I was just blown away by that. I know that I relate to lyrics from other people, and I know that people probably would relate to my lyrics, but I just never imagined someone being like, “Wow, your song helped me.” Like, what? How? Explain that.

With this album, I knew that I wasn’t purposely trying for that, but I knew that people can relate to what I’m going through. My struggles aren’t necessarily unique to me only. I think as a gay, multiracial man in America, I think I probably share a lot of the same feelings and emotions as a lot of people in the world right now. So, I hope to reach those people.

An important artist for me when I was growing up was Elliott Smith, the singer-songwriter. Because he made it okay to express emotions like that, for me, these emotions that I’ve always just kept inside and never told anybody about, here’s this guy creating these beautiful songs about these emotions. That’s how he gets through. Unfortunately, it didn’t work out for him in the end, but that was so inspirational to me. The idea that I could have the opportunity to do the same thing is beyond anything that I could ever want in life.♦

“Stay Around” is now streaming on all platforms.