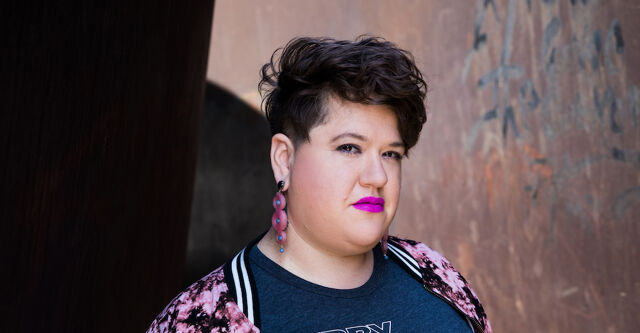 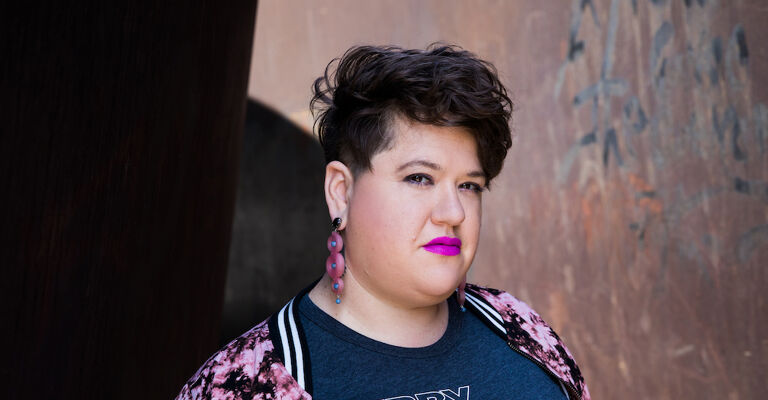 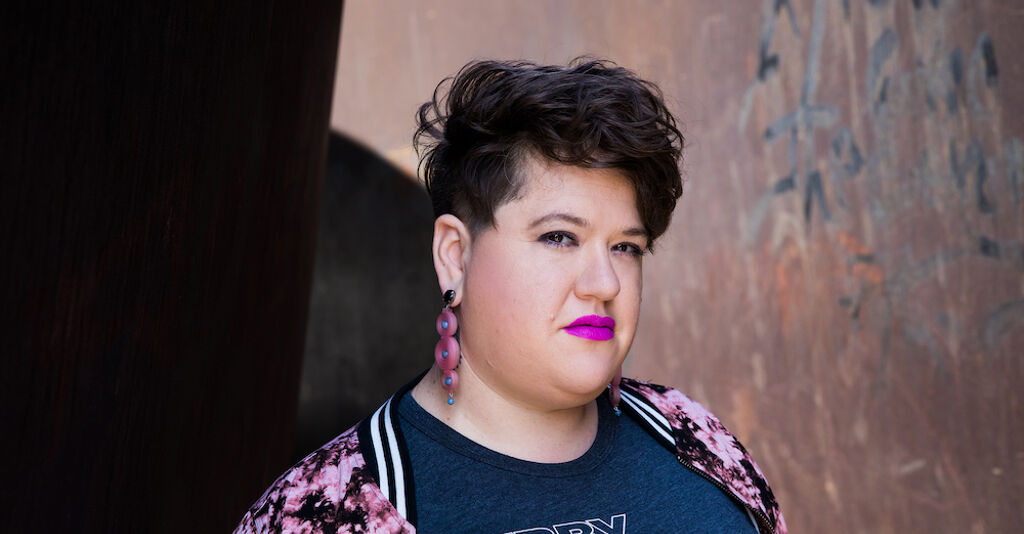 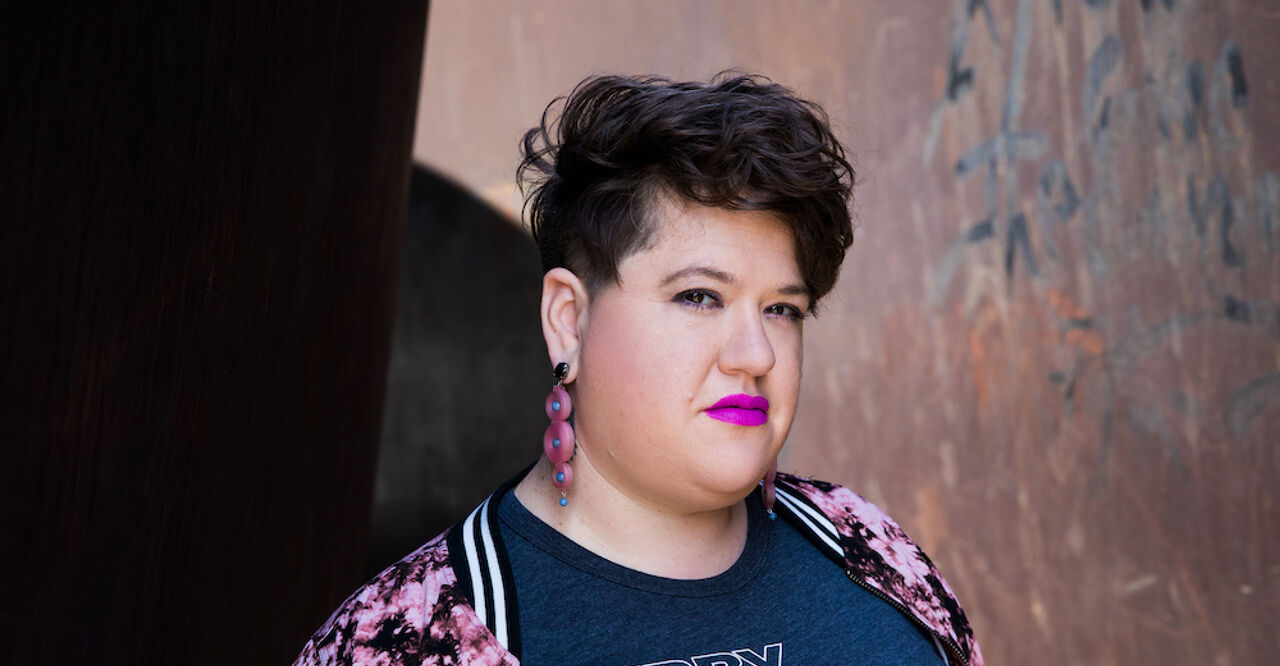 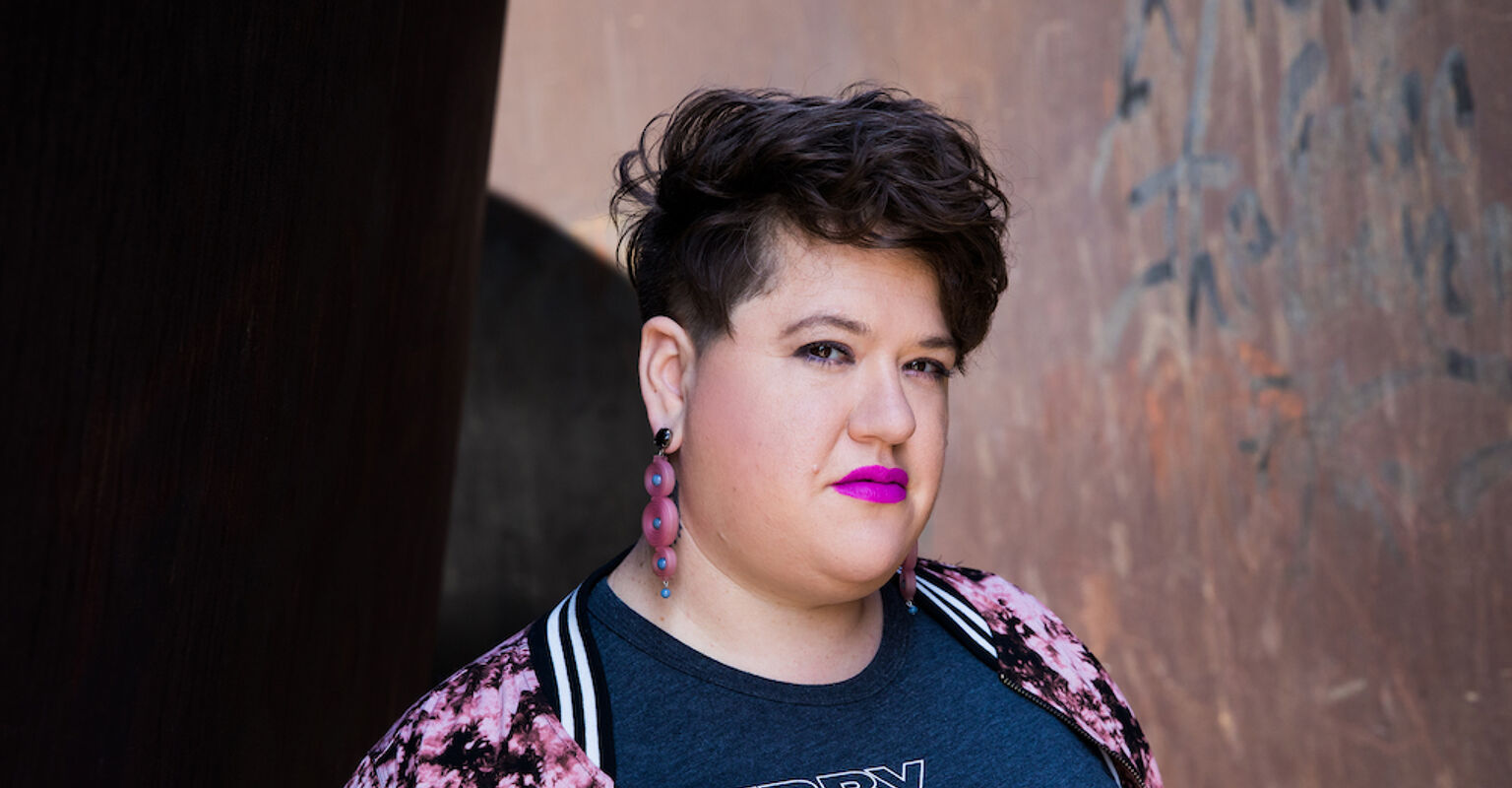 INTO sat down with Hutchtastic to talk what led them to their undeniably Hutchtastic art and identity, from a background in academia, to the power of fat liberation and representation, to a revelation fueled by unreciprocated oral sex.

Congrats on the recent release of your new single, “I’m Hutchtastic”! I hear you had a pretty fabulous premiere event for the music video — how did it go?

The event was really exciting. We screened two previous music videos that were also a collaboration between the director and myself before screening the new video, “I’m Hutchtastic,” and I had never seen any of that work on such a large screen. That was just really breathtaking and incredible, and it was all really well received. The audience was all really into it.

Then I was joined in conversation with incredible writer and activist Virgie Tovar, who is a huge inspiration for me and was really seminal in my coming to my current state of political radicalization in terms of fat liberation, as well as just coming to a stronger place of acceptance of myself as a fat person. To have her join us and to hear the incredibly complimentary things that she had to say about the work, as well as helping to articulate some ideas that I felt were really relevant to the rest of the audience who maybe doesn’t have all of that background that I do coming to it, was really special.

It’s not often that folks mix academia like that with dance music. How do you feel about bringing those worlds together?

Before I got into dance music as a creator and more on the industry side, I trained in fine art. I’m trained as a sculptor. I feel like my education in art theory and critical theory has just been so eye-opening for how I’m able to interpret the world, because culture informs everything.

Dance music has its roots as political. Dance music really came out of marginalized people creating safe spaces for ourselves, because we didn’t have anywhere else that we could be free. And that has gotten more and more forgotten, I think, as it has become more and more popular and more and more mainstream. And so for me, it is really important to continue to remind people and to amplify that history and that story, that the first DJs were not pretty white dudes that learned to spin records, but that techno music was invented by Black folk in Detroit house music, and disco before that came from queer Black and Latino spaces in Chicago and in New York. Even rave culture in the ‘90s was a place for people that didn’t maybe fit into the mainstream, didn’t have ways to connect with each other, didn’t feel safe necessarily in more mainstream spaces. To me, for that reason, it’s all really connected.

That’s why when my partner Kevin Knapp and I founded Plump Records, it was really important to me that the label had a political slant, and that we came from a place of moving from an ethos, as opposed to necessarily trying to cultivate a specific sound.

Tell me more about that ethos.

Basically, we are fat-positive, queer-positive, sex-positive, anti-racist, with an emphasis on amplifying marginalized voices. To me, that is just really important, because right now those voices are so underrepresented. I can’t tell you how many fat girls have come up to me and said that they started DJing because they have seen me up there, that they love the music and didn’t think that it was okay for them to be a DJ, that no one would want to see them DJ until they saw me up there.

My partner has been at this a long time and has some notoriety, and he feels like he really got where he is today because of people that came before him that gave him a bit of a leg up when he was just trying to get started. And so for me, if we have this platform, and we’re gonna be trying to help the next generation to get their foot in the door, it’s important to me that that was people that are less represented, because — I don’t know, I think it’s sort of obvious why. To me it is. Like, duh!

Tell me more about this latest single, “I’m Hutchtastic.” It has some pretty crazy lyrics: “You wasting time with all that haterade. I’m just gonna squirt right on your shaderade.” What was your inspiration for the song?

It really came from this realization that I’ve had in rejection of a lot of cultural messaging that I received basically my whole life: that as a fat, female-presenting person that I was of diminished value, that I was not sexually desirable, and that I was lucky for any sexual attention that I would get. And as I grew in my own development, gained more confidence, and most especially once I moved to San Francisco and became aware and involved in the sex-positive community here, then I realized that that was very, very much untrue.

Specifically, at some point, I had a friend who suggested this idea that I ran with. He was a professional pornographer and erotica writer. And he ghostwrote this profile for me that was very explicitly only looking for men that wanted to provide me with unreciprocated oral sex. And I just was inundated with many, many, many, many messages — like, 10 to 15 messages a day — with dudes that just wanted to show up and lick my pussy and go away without ever even taking their pants off. This was this complete reversal of everything that I had ever been told about myself and my own desirability. And yeah, it was a really empowering experience for me.

Wow, I am obsessed with that story. I think that is just fucking fabulous. So liberated. So queer. So fun. I love it. And can you tell me more about this “Birth of Venus”-esque music video for the single?

This is the third music video collaboration between myself and Brittany Ballard, aka Baby Luck. The treatment for the video really came from her and a dream that she had, interestingly, which is also the case of our first collaboration. So Brittany had this dream about me as a water goddess coming to land for the first time. And when she shared that idea with me, I was super into it and immediately told her about another artist that has been super influential in my life, which is Annie Sprinkle, and she and her partner Beth have this thing called the ecosexual revolution. One of the concepts there is earth as lover, not mother. And so that was something that we really tried to embody when we made this video for “I’m Hutchtastic.”

Ecosexual! I feel like there’s a lot to explore there.

What is so inspiring for me about that, is when you look at nature, there’s just this endless diversity in shapes and forms, but also I was just reading some stuff about gender role diversity in many, many animals. So I think that it’s really important for us to remember that we’re not separate from nature. We are, in fact, part of nature. And when we do that, I think it really helps us culturally and as human beings to separate from some of these more limiting ideas and roles of how we’re supposed to be.

A body is not supposed to be a certain way. There isn’t only a gender binary that people can subscribe to. If you look around, every tree is different, just like all of us are different. I think that there’s a lot that we can still learn from paying more attention to the world around us.

“I’m Hutchtastic” is now streaming on all platforms.