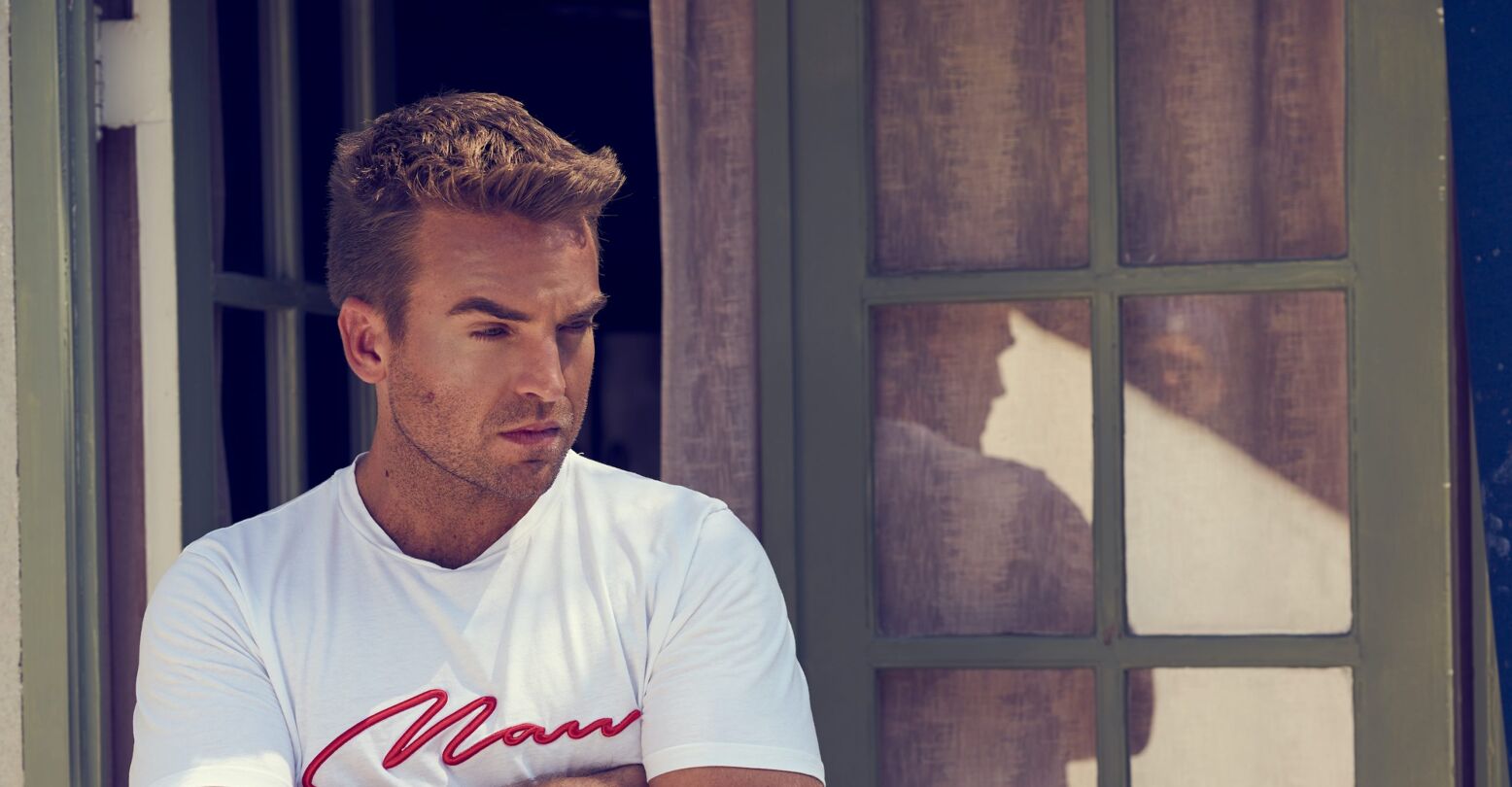 Songwriters, producers and the like — the so-called “back-end” folks of the music industry — are integral to putting out the hits that top the charts. But their contributions are rarely recognized by the average listener. That’s been the case for James Maas, a longtime songwriter and producer who’s finally stepping into a front-end role as the vocalist for RIP Youth, a moniker he took on initially as an avenue to release songs that weren’t getting picked up by other artists. But on his latest single, the dance anthem “It’s A Vibe,” Maas is the lead singer for the first time in his career. INTO sat down with Maas to talk finding freedom in West Hollywood, stepping into the spotlight and why gay people make the best audience.

INTO: How did you get involved in music, particularly in the US? I know you’re from Australia originally.

JAMES MAAS: I slept my way to the middle about 10 years ago. (laughs) No, I moved here 10 years ago from Australia. I was a writer and I had some songs in Australia that had been quite successful, I got lucky. And it was always just toplining for other artists.

My dad died when I was 16, and there was a little bit of running away from my own stuff back there. And I hadn’t come out there yet, either. It was a very different me. America really helped me come to terms with — I live in West Hollywood. I definitely enjoyed the openness of it all. Nobody knew me — nobody knows me now — but in my own friend circles, though, they didn’t really know me either. So then here, having no one know me on any level, I could start fresh. And I was as gay as they come, purses falling out of my mouth, having the best old time, walking down Santa Monica Boulevard, and I thought, “Hey, I’m never leaving here ever again.”

When I came here, the artists that I could work with and the talent that I was able to be exposed to immediately was definitely an incentive. And I got married to a guy, got divorced from a guy, got my green card from a guy. It was a nice thing. But yeah, I definitely have seen a lot and done a lot.

You get older, too. I’m 33 now. Getting older makes you — you care less, then you do more, because you’re not worried about what people will think of it. As you get older, you just care less and I just decided that I wanted to stay here and keep being the me that I created over here, which was not a lot like the person back home.

INTO: And did that idea of getting older and caring less have anything to do with your choice of name? RIP Youth?

MAAS: Yeah, that’s funny, because everybody asks about that. And I really, really enjoy everybody’s interpretation of it. There’s a couple of meanings, and I like to let everyone just play with it. Most of the time theirs is more interesting than mine. But I’ve been saying since I was, like, 16 years old that my time was up, saying, like, “I’ve got six months left, don’t I?” Like my youth was already dead.

INTO: I’d love to talk a little more about your music. How would you describe your musical style?

MAAS: My musical style is very much ‘80s, ‘90s, early 2000s. I was influenced by — it’s such a diverse range. Anything but heavy metal. I’m sorry, I could just never really get into heavy metal. I have a lot of anxiety and depression anyway, so.

I haven’t really touched the surface, even, of what I want to do yet. But for this, and our next single coming out after this, I’m getting closer to it. And I really love Mark Ronson, Calvin Harris, Charlie Puth — I feel like he’s the best producer of our time, of young people right now for sure. So he’s on the money.

I’m also a big Mariah fan. I think it’s coming back around again — being a Mariah fan is cool, right?

INTO: Oh, yeah yeah yeah. She’s back in style.

MAAS: Good. Because I had to go through so many years where everyone was like, “Really? You love Mariah Carey?” While trying to hide being gay, as if I could.

INTO: So could you talk me through the inspiration for “It’s A Vibe”?

MAAS: I know it means many other things outside of the music industry, but for us, “it’s a vibe” is basically when a song is good, or it’s a hit, or it’s something that we know for sure people will like.

So basically, we wanted to write a song about having that certain person that you see with rose-colored glasses, that you think would make your world better. You’re enamored by them — it’s anyone you have a crush on or are lusting for. It changes your perspective, and you think “Oh my god, I just need a little piece of what that person is, or how I see them. So if they were in my world, I bet you I could write a song for them because some of their coolness would rub off on me. And I’d be able to write a song that would be a vibe!”

INTO: As opposed to your previous songs which have featured other vocalists, what does it mean for you to now be in the spotlight as the lead singer?

MAAS: It means a lot more Instagramming and TikTok. There are so many platforms and there’s so much that goes into releasing a song. You know, when I would write for an artist, they go out and they tour it and they go and do interviews and they are constantly keeping their fans included in the whole process. And I haven’t really had that before.

I will say one thing: it feels great to be singing. I started as a singer, and one of my songs, “Chemical Rush,” which I’d written for myself under my development deal, had been heard by a friend of mine, Brian McFadden. He was a part of a big boy band in the UK called Westlife. He went solo, got signed to Universal in Australia. He lived in my building. I was asking him his opinion one day, and it was me singing the song, and he’d come back later that day and said, “Do you mind if I release it? Universal would like to.” I said yes, and it was the first song I had released that I’d written, and it went gold in Australia. It was number two on the charts there.

It was really exciting, but I always had in the back of my mind that, “Oh, that would have been nice,” and then I just kind of wrote myself off. Like, maybe I’m just back-end. It’s kind of comfortable there, and you don’t really have to think too much about how you look or what you say or whatever. But I mean, I’m thinking about that anyway — we all are! So it feels good to be able to have a release and be able to sing. And the more I do it, the better it feels.

INTO: What future projects can we expect from you? Is there an album on the way?

MAAS: I get a new single out every other month with a video and a promotional package. We’re really into the new vibe and having me singing and we have a really exciting feature on the next one with me. And they are much more fabulous and cool than I am, that you would definitely know of them. So that’s really exciting.

I feel like at the moment, we’re releasing singles too quickly to put out an album. But I have a bunch of songs in the background and songs from my catalogue from years of writing that we’re going through to release as bonus singles, so there could eventually be an EP to put together from that as well.

It’s a really diverse range, too. I like it. I don’t really like to stay inside the box. I mean, I know what I like. And it sort of dances around that pop, R&B, dance vibe and stays in that circle. I mean, I just want to have fun. We’re not curing cancer or performing brain surgery. I think we need a little bit of an escape from all that’s been happening. If I can just make a few people have a little bit of fun or not have to think too hard, that would be really nice, as well as not dumbing people down at the same time.

INTO: I mean, there’s such a market for pop music. I love pop music! I don’t need every single song to be a thought experiment.

MAAS: I know, exactly! I’ll listen to a fucking podcast! It’s music, people, come on, enjoy it a little. And gay audiences are the best, and being gay is the best. It’s such a nice time that everyone else has ushered in for us to be able to enjoy now. We’re so damn lucky.