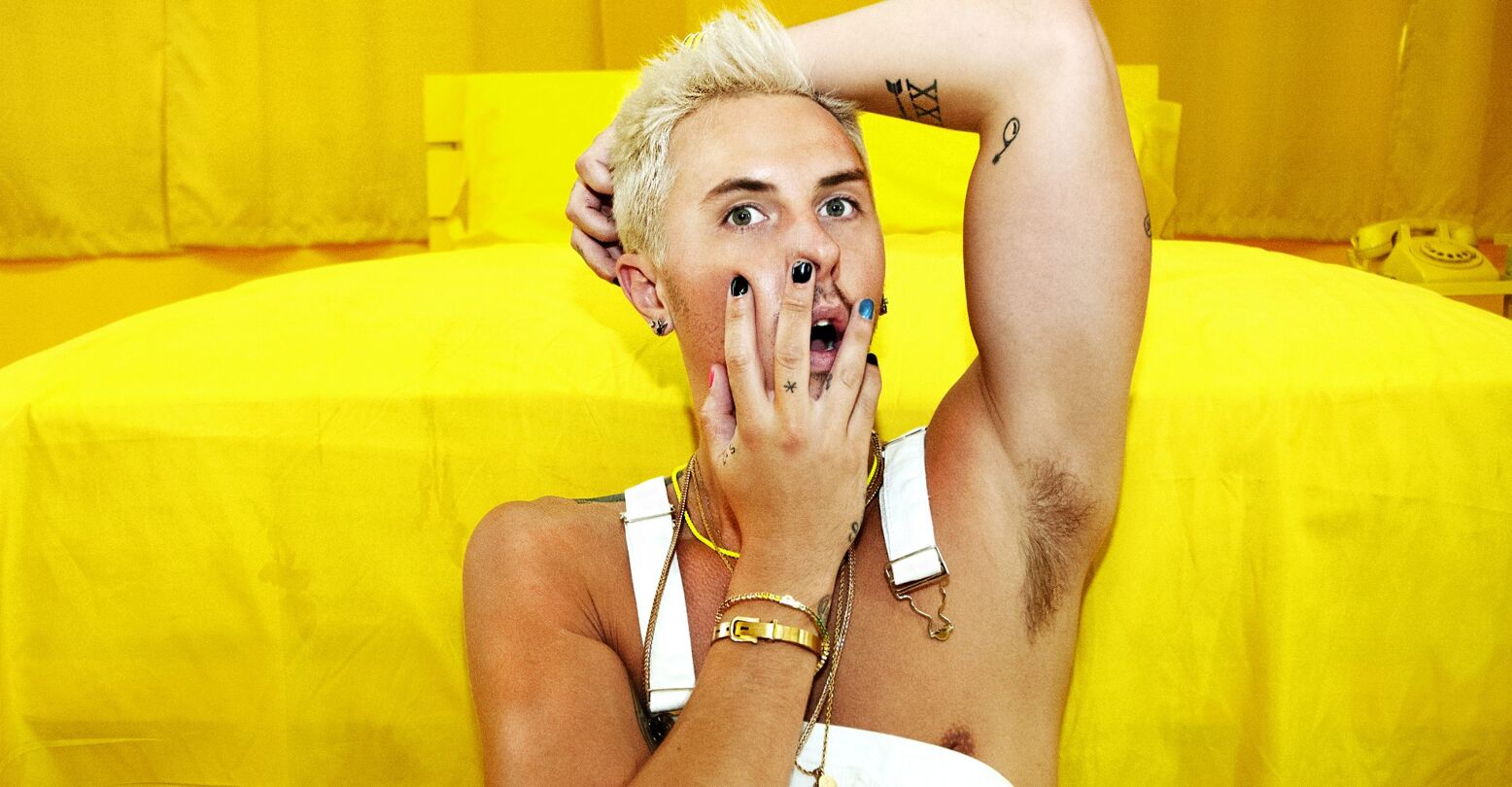 BLEACHx is the new moniker of queer platinum-selling songwriter Jeremy Thurber. Thurber has been working in the music industry for over a decade now, but for the first time, he’s taking centerstage. He just released his debut single and music video, “DEAD INSIDE,” an angsty but playful pop anthem about dealing with grief.

INTO sat down with BLEACHx to hear the story of his bleach blonde rebrand, his first single and what’s next for his career.

INTO: First off, you’ve been working in the music industry for a very long time as Jeremy Thurber. So what inspired you to do this recent rebrand?

BLEACHx: Well, quite a bit. Like you said, I’ve been doing this in music for quite a long time, and I got my first record deal when I was 17. And the industry ran me through it. I just really wanted to bleach my past. I always had this name in mind, if I was ever going to put out music myself again, and I told my manager. He fell in love with it. And I really just wanted to start new, start fresh, without what people thought in the past, because I had been very controlled — told not to be gay, sent out with beards. The last time that I had relations with the opposite sex was forced by a label, and it was very pressured. So it took me a long time to step back and be comfortable with myself, and I wanted to start a new chapter and do something that felt authentically me.

I’m very comfortable with who I am and what I want to say and making sure that, as we move forward with my amazing team, we do it how I want to do it, instead of someone telling me what to sound like, what to say, who I can love, what I can be, what I can wear. And that was the most important thing, that we just had an insane amount of fun, and did it for us.

INTO: So would you say that now in this new chapter as BLEACHx, you feel the most true to yourself that you have in your career?

BLEACHx: One thousand million hundred percent. BLEACHx is unapologetic. And that’s what we say to each other on team meetings: it doesn’t matter what anyone else thinks. I’m going to make the music I want to make, that I love. I’m going to be in love with who I want. And, yeah, it just feels good. It feels right. And I’m having fun for once out of a 14-year career in the industry.

“The last time that I had relations with the opposite sex was forced by a label, and it was very pressured. So it took me a long time to step back and be comfortable with myself.”

INTO: I’m so glad to hear that! It sounds like you’re on a great path. Yay! So in this new phase in your career, you’re breaking out as a solo artist, versus so frequently being a collaborator in your past. What does it mean for you to now be the face of the work that you’re doing?

BLEACHx: It’s wonderful. I feel like I finally get to tell my message and, again, say what I want to say. Honestly, one of my favorite things is developing artists and finding sounds. So it was kind of like I got to do that with myself. Before, it was really hard. Now it’s out of body, almost, like outside looking in. Like Stefani has Lady Gaga, Raymond has Usher, Beyoncé has Sasha, you know?

INTO: So making those comparisons, what is the difference between Jeremy and BLEACHx?

BLEACHx: Jeremy gets to go home at night and be with — I just got engaged on Friday.

INTO: Oh my god, congratulations!

BLEACHx: Thank you! Ahh! To a wonderful man. And it helps me keep work and home separate. I love what I do. But again, you know, BLEACHx is just out there. He is Jeremy, he is just this huge expansion on him. And it’s given me the strength to say what I want to say and love who I want to love and post what I want to post — but they are the same person. It’s just, it’s BLEACHx, and he’s having fun.

INTO: Moving on to “DEAD INSIDE”: what was the inspiration for that song?

BLEACHx: I was in a really tough place in my life. My father had passed away. And this man that I was dating, my ex of two years, left the day after he passed away because he didn’t want to deal with the grief. And it was a really dark, angry time. And when I finally got out of it with the help of awesome friends, and a lot of therapy, which is so huge — I think that’s another thing everyone needs to know, that therapy is a normal thing, and mental health and awareness is super important. So go seek help if you need to.

When I got in the studio, I didn’t know that I was doing BLEACHx at that point, I didn’t know I was doing a project. I just was at a place where I was like, “I want to make something fun out of a really dark time.” And I wanted those maniacal beats that sounded kind of evil, but with a fun Lady Gaga, *NSYNC song on top of it, and just make it danceable and quirky and fun and put all the personality that I have into the song. That was really important for me. And then it just kind of snowballed and it became this thing, and my manager was like, “We’re doing this. This is you. I can’t give this to anyone else; you have to do this.” And after a few weeks of talking, I was like, “Let’s do this. Let’s change the name and do what I want to do and start a new chapter.”

INTO: If you had to choose a favorite lyric from the song, what would it be and why?

BLEACHx: Oh, that’s tough. Okay, obviously my favorite lyric is, “Just shut up Jeremy, sit down. Okay.” That’s totally me. In every record coming out, there’s the “okay”s. My friends and everyone laughs at me and they’re like, “There’s that moment!”

INTO: Totally. Ariana has her “yuh,” you can have your “okay”.

INTO: Exactly! Entering the queer lexicon of iconic lil’ noises.

INTO: I want to talk about the music video too. What inspired the concept of the video?

“Obviously my favorite lyric is, “Just shut up Jeremy, sit down. Okay.” That’s totally me.”

BLEACHx: My biggest inspiration for it was Eminem, TRL. I loved how Eminem was serious in his videos, but he also made fun of himself and others. And again, we wanted to get in everything that embodied BLEACHx and Jeremy: so, you know, the GQ moments, but also the funny things and the cute crop tops (that I’m comfortable wearing now) and all that stuff. And we really wanted to go for that Terry Richardson, Paper Magazine vibe, keep it a little gritty and just have fun. I wanted it to be more of a calling card than a music video and just kind of show all the different voices in my head, and all the characters that you’re going to start meeting as we continue.

BLEACHx: I love that reference! Yes!

INTO: You wear a lot of yellow in the music video — you’re also wearing yellow right now. Any connection with the color yellow?

BLEACHx: It came from the hair, but we just started on it — it was my manager’s idea. And now it’s just become a thing, and we love it. Like, all my friends have to wear yellow to any event we go to, my entire suitcase is yellow — Brandon, my fiance, is like, “You’re just taking all yellow, right?” I was like, “Well, yes.”

INTO: I love it. The brand is head to toe. It’s amazing.

BLEACHx: Thank you! We love a good fit.

INTO: Oh, of course! The video also includes some clips of you as a child. What were you getting at by including those?

“My biggest inspiration for it was Eminem, TRL. I loved how Eminem was serious in his videos, but he also made fun of himself and others.”

BLEACHx: I have this camcorder that was given to me when I was nine by my father. And I held on to it. I used to sneak off into the bathrooms at the house and record myself singing *NSYNC and all these songs. I never told anyone I wanted to do music. The day I turned 18, I said, “I want to move to LA.” My dad packed up his truck, moved me to LA, I got signed to a boy band. And no one knew I could sing — I had been dancing professionally in the industry since I was 14 — no one knew. And so to me, that moment was kind of talking to myself, like, “Everything that you had to go through and those struggles of what the industry has done to you is gonna be okay.”

INTO: You know, the phrase “dead inside” sounds kind of pessimistic, but your song still has this optimistic, “everything’s gonna be okay” meaning — I like that reversal of expectations.

BLEACHx: And again, it’s about shedding the past and paying homage to all the things that I went through and who that kid was. I think there’s so much awareness that still needs to be given, especially in our community, that as kids get younger, they have to be aware that there are so many spectrums in the rainbow. And if you have those feelings and you feel like you’re that person or you’re trans or nonbinary or whatever, it’s okay to express that, and we’re building this massive community to reach out.

INTO: Amazing. So, you’ve mentioned new music this summer. Can you share any details?

BLEACHx: I will say that there is another single coming very, very soon. It’s all coming out. I’m very excited, and I can’t wait for people to hear it. It’s fun, it’s different, it’s me. I really just wanted to take bits from everything I love, from *NSYNC to Jon Bellion to Celine Dion, just mash it in there and let all BLEACHx’s personalities tell their stories.