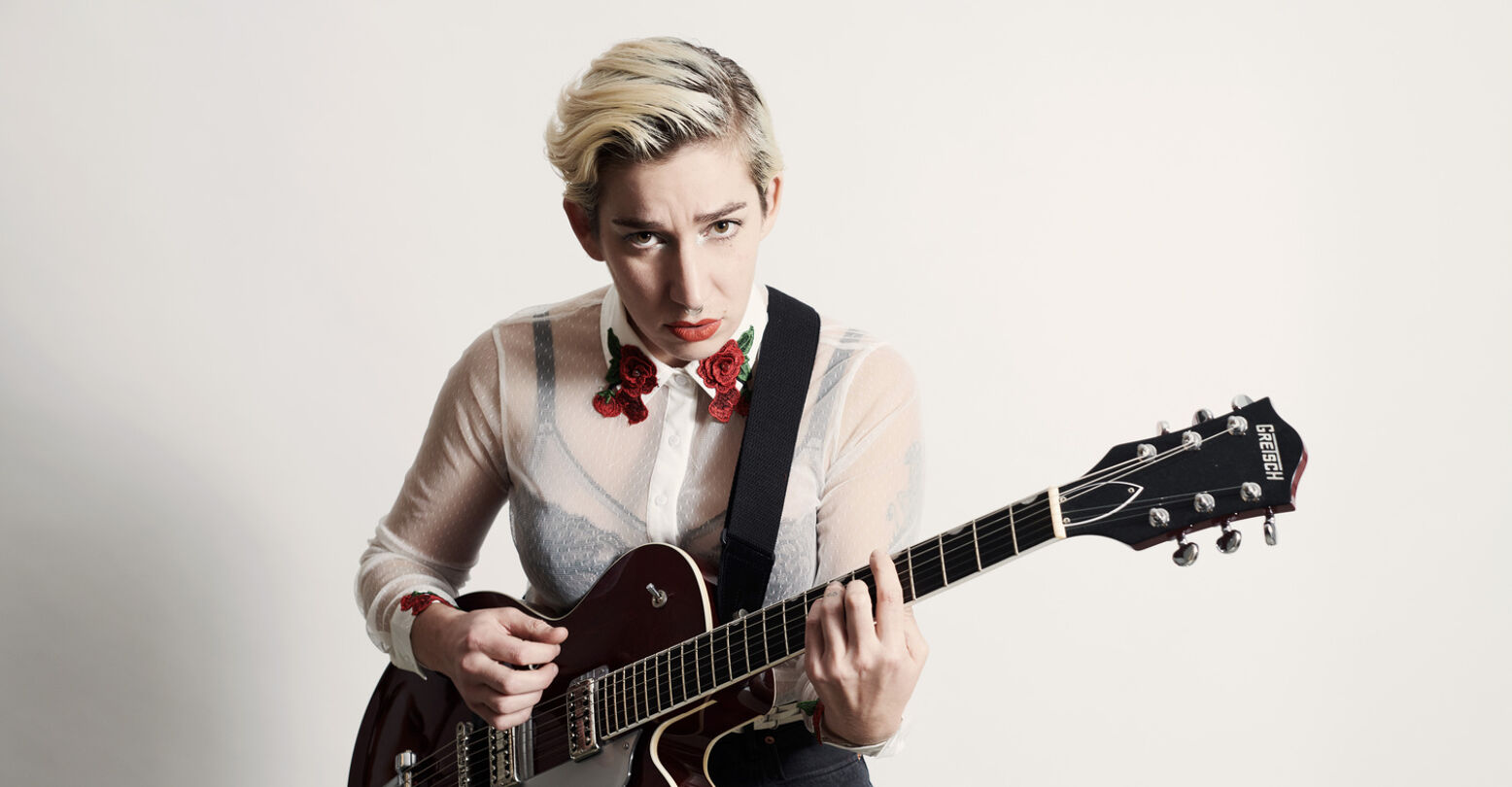 For songwriter Zoe Boekbinder, music is just as much about process as product. That was true when they co-founded the Prison Music Project, the initiative behind the widely acclaimed “Long Time Gone,” a collaborative album co-written by currently and formerly incarcerated people that Boekbinder co-produced with Ani DeFranco.

It’s also true of their latest releases, “I Am Yesterday” and “Cut My Heart in Two,” a pair of singles co-produced by musical duo Gracie and Rachel. The songs were created and promoted by a team entirely of people of marginalized genders. Equalizing gender representation in the music industry is a priority for Boekbinder as they work on their upcoming album, which tackles complex themes like accountability and confronting one’s own darkness.

INTO sat down with Boekbinder to discuss why platforming people of marginalized genders in the music industry is so important, how they’re working to make things more equitable, and how their music speaks to society’s dangerous relationship with harm.

INTO: Hi Zoe! For anyone who might be unfamiliar with your music, how would you sum up your style?

It’s fine! We should be good at this. I’m a songwriter. I’m a folk singer. Genre does not wall me in. I’ll go anywhere.

I think you can definitely feel that on these latest singles. First, let’s talk about “I Am Yesterday.” How did that song come to be?

It sounds like a brokenhearted love song; it’s not romantic, actually. It’s about somebody that I collaborated with a few different ways, and we were good friends.

I think a lot of us have had the experience — I like to think I’m not alone in this — where someone cuts ties with you without telling you why and being left with this mystery, and wanting the opportunity to make it right or at least to understand what you did to cause someone to pull away. I’ve written several songs on this topic, because I don’t know what makes me so incredibly sensitive to it. But it’s maybe my least favorite experience of being human.

I can definitely relate. What was it like taking that inspiration and putting it to music?

Writing is always a relief for me. I think that’s why I write music, because I need to make something positive or something beautiful out of pain. So that is always cathartic and healing for me.

I wanted to make a release with only people of marginalized genders in every role. The eventual plan is to make a whole album, but I wanted to start with this double single, because I’ve never done that before. I am a feminist, I’m queer, I’m nonbinary, but in terms of mixing engineers, mastering engineers, recording engineers I’ve worked with, those people have tended to be cisgendered men. And those roles, as well as producers and the industry as a whole, tend to be cisgendered men. The industry is just dominated by men — like many industries, but the music industry is a little worse than other industries. So I wanted to see how hard it would be to find either women or nonbinary people to fill every role. It turned out to be not hard at all, actually, and a really enlightening and really inspiring experience.

Amazing! And why do you think it’s so important to be seeking out people of marginalized genders for these positions?

So much of how art is presented and consumed in the world has to do with not just the artist who’s creating it, but also the people who are controlling how it looks, because there are so many steps from me writing a song to when it enters someone’s ears. And it’s not just my music, and it probably happens a lot more with more pop music that is written by a team. But I really didn’t used to think about it. You know, a producer has a huge role, a record label has a huge role, even the publicist has a big role in the language that’s used around the record.

A lot of popular music has a lot of misogyny in it. I mean, there’s plenty of songs about nonconsent, about stalking, about fetishizing young women, literally just about rape, which is horrific, that these things are being glorified and popular music. And it’s songs that we sing along to without even thinking about it: “Every step you take…” There’s so many of them.

That’s where representation really matters in every role. I think everyone that touches art has a role in the form it takes when it’s consumed by the public. So I think it’s really important that in every step of the way, there is equal representation. I’m not looking to equally represent all the genders in the making of my music, because it’s so unequal everywhere else that I am trying to sort of tip the scales the other way. Not until they’re unequal the other way, but there’s a long way to go. So I can go all marginalized genders and men will still be dominating. It’s fine. Nobody needs to get angry.

Totally. Just keep pushing it really, really hard in this direction, until someday it’s not something we even have to worry about anymore. Circling back to these new singles, could you tell me a little bit about “Cut My Heart in Two” and the inspiration for that track?

I was part of this group — I was the only nonbinary person; the other people are all women — and we all had experienced abuse from the same person many years ago. One of us reached out and formed this little group. It was just so incredible to be able to share this experience and talk about how it impacted us years later. Lots of crying. Just such a beautiful crew and such a beautiful experience, and very painful, obviously. And we were talking about something that continues to be difficult, which is that some of our friends are still in community with this person who abused all of us. And one of my friends said, “Asking me to be in community with you while you’re also in community with that person is like asking me to cut my heart in two.” It just resonated so much with me. We got off that call and I immediately started writing a song and sent her a first version of it. So that’s where it comes from, and it’s an experience that I’ve had a few times.

I could talk for a long time about the way that we respond to harm as a community and it relates to the work that I did in prison, it relates to interpersonal abuse within communities I’ve been a part of. It’s really so deep in our culture to either avoid or to punish, which is also avoidance. I think what we don’t do is confront the reality that all of us cause harm. It’s not even just that all of us are capable of it. We all do it, maybe unintentionally, but we all do it. And so it would be really advantageous to everyone if we as a culture could learn how to confront it in a way that doesn’t perpetuate more harm, which is what punishment does. When we only respond to harm by sending someone to prison, it’s like a domino effect, and then we just see communities be devastated by incarceration.

Absolutely. In my experience, conversations about harm and accountability are becoming more and more common, so even if we’re not all the way there yet, at least it’s something a lot more people are thinking about critically.

Yeah, it does feel like we’re in a stage right now where we know at least how to talk about it even if we don’t collectively know how to put it into practice quite yet. And we’re sort of stumbling right now. You know, my friend who said the line, “You’re asking me to cut my heart in two,” I don’t think she was saying, “I need you to shun this person and never speak to him again. He must be banished forever and never be able to work again or have friends again.” It was, “You’re not even confronting him with the fact that he did this to me. You’re just ignoring it and continuing to basically enable him.” So, yeah. That’s what the song is about.

Again, thank you for putting these really complex but really important messages out into the world as music. What other themes will you be tackling in your upcoming projects?

Most of my songs are about confronting darkness in a way, either confronting harm or confronting our own darkness, sadness, grief. Confrontation is a really big theme: not hiding from things that we might feel inclined to protect ourselves from, to turn away from, to avoid, to hold at arm’s distance. It’s really about fully opening our eyes and fully confronting all of these things and processing them.

“I Am Yesterday” and “Cut My Heart in Two” are now streaming on all platforms.