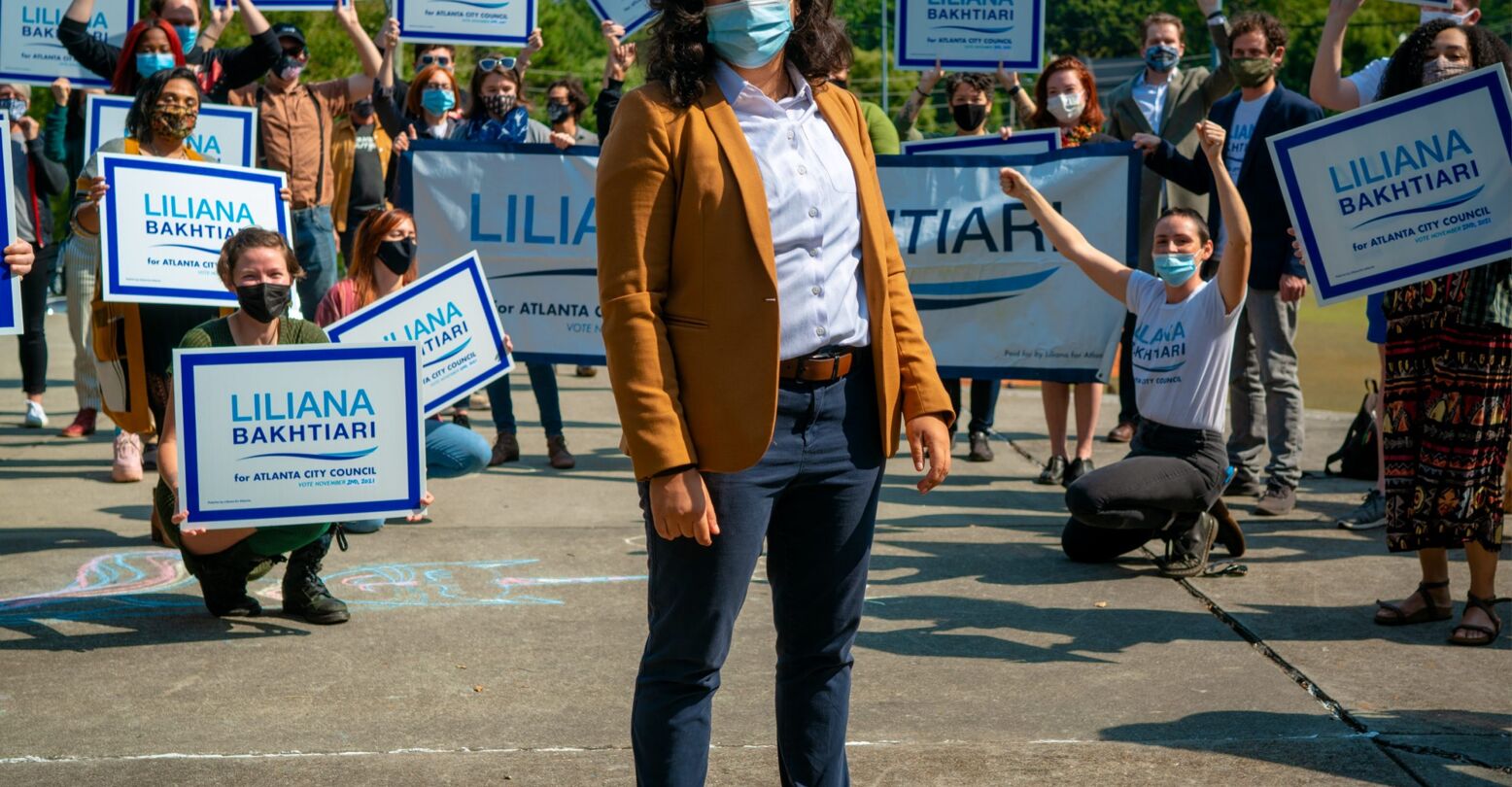 Every time I talk to Liliana Bakhtiari (she/they), she is in the midst of solving a problem. It could be almost resolved—like two elderly cats who, recently rehomed, are slowly adjusting—or will never be totally resolved, like trying to find affordable housing for Atlanta’s unsheltered residents. Regardless of scale, Bakhtiari is something of a pathological problem-solver. This fall, she’s putting those whatever-it-takes skills on the ballot, running for a seat on Atlanta City Council. If she wins, she’ll be the city’s first queer, non-binary, Muslim city councilor, and a boon for Atlanta’s progressive wing. Bakhtiari, the child of Iranian immigrants who grew up in Atlanta, left home early and experienced homelessness and grinding poverty while learning to survive on her own. Now a community organizer and a long-time social justice advocate, she knows firsthand many of the issues now plaguing Atlanta’s most vulnerable residents.

This is Bakhtiari’s second run for the job: in 2017, she ran against a long-term incumbent and came tantalizingly close with 49% of the vote. This time, that incumbent is running for a city-wide office, and Bakhtiari is the clear front-runner in an open race. With her partner, Kris, and a small but dedicated staff, Bakhtiari is running the kind of patient, community-centered campaign that can restore even a cynic’s faith in small-d democracy. I talked to Bakhtiari about the campaign, the city she loves, and how her faith and queerness have shaped her politics.

Does your identity as a queer, Muslim person of color impact the kind of politician you’re aiming to be?

Absolutely. I think it makes me a better advocate and a better representative. The most intersectionally marginalized people have the most nuanced perspectives of what is missing in the ways we care for our communities. These voices matter so much more than we give them credit for. When we create movements and solutions that benefit QTPOC, everyone benefits. It’s a trickle-up effect, of sorts.

As long as the same type of people are in power, inertia and apathy inhibit progress. Historically, QTPOC have managed to agitate the status quo in a way that makes room for progress. But we’re just starting to move the needle: although QTPOC have historically led the charge for civil rights and social justice, they are still not occupying the seats that wield power in our country. We don’t just need to be consulted. We don’t just need to have a seat at the table. We need to feel safe speaking at the table. And we need privileged folks to cede their power to allow QTPOC to guide and shape decision-making processes.

The more diverse we are with our stakeholders, the more inclusive, sustainable, and well-rounded our solutions become.

Historically, QTPOC have managed to agitate the status quo in a way that makes room for progress.

You don’t come from a family of politicians. What made you decide to run for public office?

I don’t have a traditional background in politics, but I do have a background in the sense that I have a father who fought two revolutions for fair, free democratic elections in Iran, and a grandfather before that who fought for freedom in his country and faced a lot of persecution for that, and great-grandparents who did the same thing, and had to flee Azerbaijan because of standing up for human rights. I was raised marching in the streets, raised in community organization, public service, and volunteering.

All I’ve ever wanted to do is public service. When I was a kid, I said I wanted to travel the world and work in charity – I found that recently written on an assignment from first or second grade! It’s all I’ve ever wanted to do. My whole background is rooted in crisis relief work, non-profit work, and NGOs. I’ve done that all over the world, throughout the Southeast.

What got me to run the first time was the Muslim Ban. Iran was one of the countries on the list, and it deeply affected my family; family members who are here on green cards, and others trying to get their green card to come over. That, coupled with the apathy and defeat and sadness that I saw – it really terrified me. Because if people don’t engage on the local level, then federally we’d be decimated. I’d been asked a number of times to run for office and I’d always said no. But it became a point where that felt like the only option, to protect my family, to protect my community. I got tired of waiting for someone else to do it. So I jumped in.

My dad always said, “You always put forth in the community what you want to receive, because you never know how far you are from rock bottom.”

Atlanta, like a lot of other American cities, is changing fast. What new growth are you excited to embrace, and what are you concerned about protecting?

I’m very excited about the possibility of density growing our tax base. When we grow the number of people, we have more revenue. That’s revenue for complete street redesign: put in more sidewalks, a light rail system that actually reaches places, and busses and other rapid transit. I’m excited to be able to profitably densify and have more local businesses in the community that provide more jobs, bring vocational training back into our public schools – all of that I’m super excited about.

What I’m concerned about – and what is vital to protect – are our lower-income residents, our unsheltered population, and our legacy residents that have been there forever. Making sure that, as we densify, we have mixed-income communities and deeply affordable housing: workforce housing, housing for first responders, for our teachers, for our 911 operators, for our service industry people. Low-barrier housing and low-barrier shelters for our unsheltered population – those are the things I want to protect and bring into the city. There’s a lot of work to do there. And with new growth comes the possibility for funding for all those things. It’s exciting – but there’s no such thing as a free lunch.

The South in the 90s wasn’t necessarily the easiest place to be a queer kid – or a Muslim kid, for that matter! What was your experience like growing up in Georgia?

Hard. The area I grew up in – now it’s become a blue stronghold, but then it was very red, very conservative, very Christian, and not a great place to live after 9/11. No one was gay at our school – the one person who came out was severely bullied – and it was certainly not allowed in my family.

I knew I was “different” (not that I think we should call gay “different” anymore) when I was in preschool. When I was by myself, I had another identity, a boy named Nick that I liked to act out. I knew I couldn’t do that in front of my parents, so I would always pretend to be Nick in the shower because no one would bother me. I had all these props!

So I had a lot of questions about my gender identity very early on. And it was very hard because I wasn’t allowed to do or act on any of that or really express it in any way. Any time I showed signs of being gay I was shamed for it. Which led to a lot of self-hate, which led to self-harm, at a very early age, in elementary school – which is a thing I did for many years, well into my early twenties, until I finally came out to myself and to everyone else at 23, and it felt like the biggest burden had been lifted off of me.

Bakhtiari is running the kind of patient, community-centered campaign that can restore even a cynic’s faith in small-d democracy.

Your family is Muslim – what has Islam taught you about being a good civil servant?

Everything. I was raised in a Muslim household by a father who believed that public service was the cornerstone of his belief system. I was raised in public service. It was a very big part of my upbringing. My dad always said, “You always put forth in the community what you want to receive, because you never know how far you are from rock bottom.”

Respect is a big part of that- never judging other people for their beliefs, never trying to change them, but holding on to my own values, and respectfully disagreeing with another person. My job was not to change another people’s belief system – to convert them – that wasn’t my responsibility. But public service was a huge part of my upbringing. It was everything.

Seeing people who may not look like “traditional politicians” can inspire others to run, too. What do you say to people interested in running for office who don’t have a political background?

Now is not the time to come from that background! 15, 30 years ago, the conversation was different – but now folks want people in office who aren’t lying, or just paying lip service.

They want someone who actually understands what it’s like to struggle with poverty, to be hungry. Someone who understands what it’s like to work three, four, five jobs at a time, to be a single working parent, to live the struggle and the experience. You don’t need you to be a lawyer or an ivy-league educated person to do that; I’m certainly not those things! I think people really want someone who understands. They want a real person. ♦

Rachel Garbus (she/her) is a writer based in Atlanta, Georgia. Find her on Twitter @rachel_garbus.