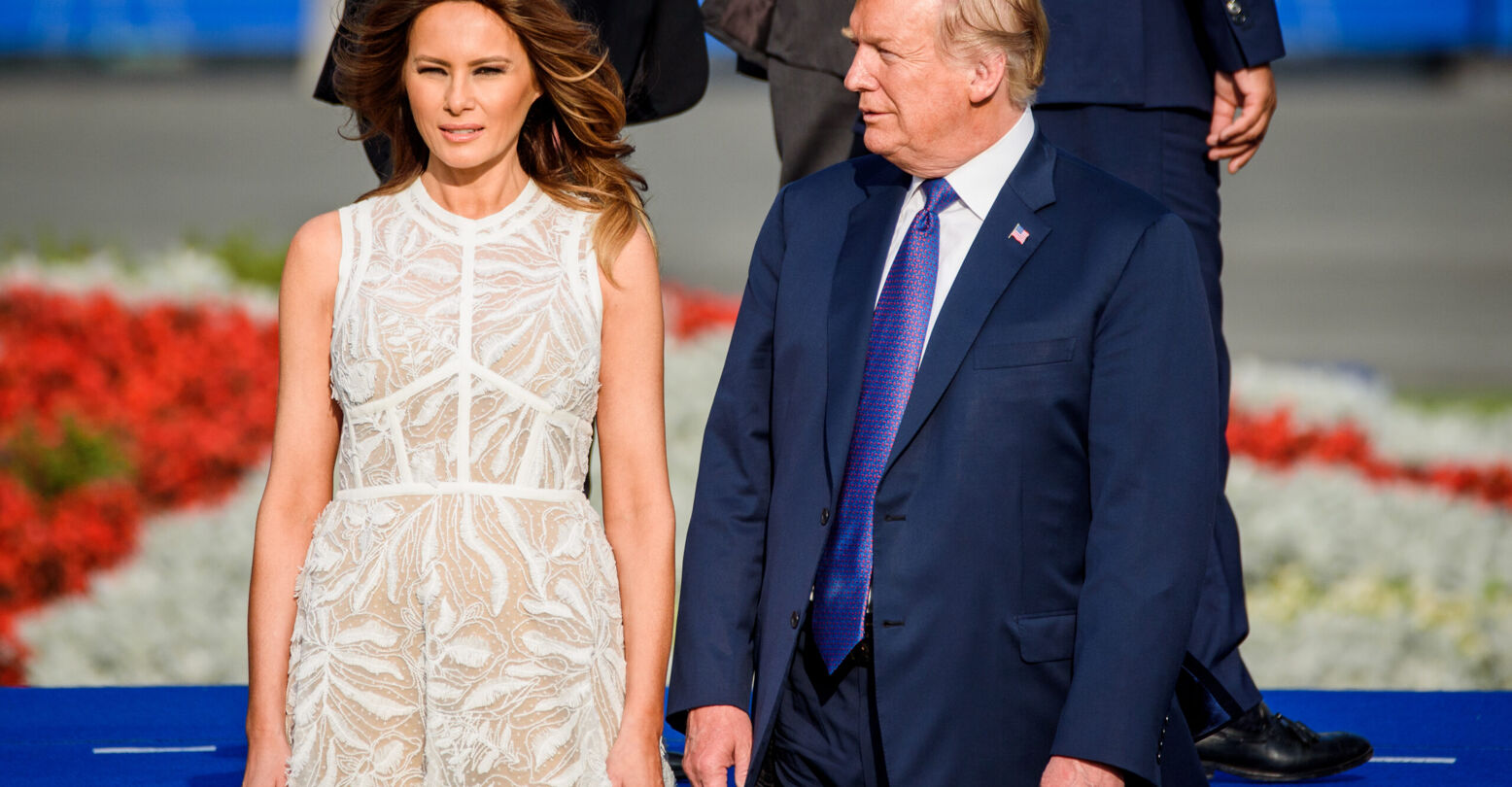 Former First Lady Melania Trump has filled her time since leaving the White House with, maintaining staff that are now working for her under the so-called “Office of Melania Trump,” and alongside her husband, trying to make money wherever possible. That includes holding high-priced events where they may be the special guests or emailing supporters for donations or special offers.

For Melania, specifically, she has recently delved back into solo projects. One such project was jumping into the NFT craze, which sounds like her most Trumpian move yet. In December, she created “Melania’s Vision,” which CNN reported was an art depiction of her eyes and included a bit of audio from her. The NFT was to sell on Solana starting at $150 — or 1 SOL, which is a cryptocurrency from the company Solana and “powered by Parler,” the right-wing social app.

It was set to be up for a two-week period at the end of December. On December 31, it was still available, according to PEOPLE. It’s not immediately clear what happened to it after.

“I am proud to announce my new NFT endeavor, which embodies my passion for the arts, and will support my ongoing commitment to children through my Be Best initiative,” Melania said in a statement, claiming her Be Best Initiative would put the money toward “provid[ing] children [in foster care] computer science skills.”

Solana, however, made clear they weren’t down exactly to be associated with her. “I wanted to inform you, to avoid any confusion, that her choice to use the Solana blockchain was completely organic, and this project is not part of any Solana-led initiative,” a spokesperson told Decrypt.

Still, Melania continued diving head-first into the NFT craze, immediately announcing a January auction of more NFTs and a “physical one-of-a-kind accessory.” As it turns out, the accessory would be a hat she wore when she met French President Emanuel Macron in 2018.

This, and other items reflecting her White House “memorabilia,” were dubbed the “Head of State Collection, 2022,” and Melania put them altogether at an opening bid of $250,000, or at the time, worth 1,800 SOL (again, a currency which, to be clear, is made of blockchain and ethereum and originates from Switzerland.)

At the time, the “Head of State Collection” didn’t garner much interest, and the New York Times reported that by the time it was bought at its starting price (and no higher), the 1,800 SOL price tag was actually only worth $180,000.

But it only gets better from there: All of these crypto transactions are publicly recorded, so Motherboard by VICE uncovered this week that not only was the collection bought at a price supposedly below its worth, but in fact, the cryptocurrency used for the purchase originated from the same IP address that funded Melania’s Solana account in the first place. The account that put the auction up sent the exact cost of the starting bid to a third party, who then sent exactly that much to the user who then bought the auctioned items. Shortly after, the account that started the auction in the first place withdrew the money “earned” from the auction, and then sent it to the third party, who subsequently converted it to a different online currency and holds on to it today.

In short, the implication is either Melania, or whoever’s running her crypto ventures, had their own auctioned collection purchased through proxy, or paid a third party to pose as the secret shopper for it.

Melania’s office claims they know “the nature of Blockchain protocol is entirely transparent. Accordingly, the public can view each transaction on the blockchain,” and explained through a spokesperson that “The transaction was facilitated on behalf of a third-party buyer.”

While Motherboard‘s analytical source says it’s possible that Melania’s camp decided to do the purchase on behalf of someone not technologically-advanced enough to do all of this themselves, there was still an extra party in the transaction, and the funds are apparently sitting in a different currency that’s not Solana, but also not converted into “actual” US Dollar cash yet. Her office declined to comment in response to further inquiries.

Either way you chop it, Melania’s not popular even amongst the NFT crowd. There were certainly not people in the crypto world running to bid on her stuff, which allowed someone in Office Melania to sell the collection exactly at their starting price in the first place.

If Melania did have to buy the items herself, she also just paid herself to not wear what she thinks is one of her more notable items from her time living in the White House. If someone really did purchase the items through an in-person and/or traditional cash transaction, then all the crypto hoopla was for naught.

Her crypto venture isn’t profitable yet, but it may not be a total bust — although it’s not clear how many more of these gimmicks they can plan to facilitate just to keep up appearances.

It gives her some originality, while also proving that she’s earned the Trump name. She’s getting press for the move without having to show her face beyond Mar-A-Lago, such as an opinion in the Guardian praising that “one of the Trumps is showing entrepreneurial spirit.”

As Washington Post opinion columnist Helaine Olen wrote in “Melania Trump, her hat and the art of the crypto grift” last month before she even “sold” the collection, this is a Trump-textbook move: “NFTs are the new hot thing… [and] many investors are jumping in without asking much in the way of questions — if they ask any at all. In fact, in our current go-go environment, it seems all but rude to ask questions. It marks you as an unsophisticated rube.

“Taking advantage of the rubes has long been a Trump family specialty.”

It may be working: while the husband is now paying former Rep. Devin Nunes (R-CA) to run a new social media platform for him that will launch one day, they swear, Melania is now in full partnership with Parler, as she announced last week. That’s likely padding her wallet — or leading her straight to the sycophants that will.

Still, Melania’s own husband has not joined her in the crypto game — and it’s not surprising, since he’s not even down with crypto, let alone NFTs. Trump deemed them “potentially disaster waiting to happen” and made clear he “I like the currency of the United States,” in August. In June, he deemed Bitcoin “a scam” that’s tanking the value of the dollar.

Even if it’s not, failure and objective information never stopped most of Trump’s base from supporting them. The Log Cabin Republicans, a LGBTQ coalition of Republicans, honored her with a “Spirit of Lincoln” Award in Mar-A-Lago. They even recorded a video montage of conservatives defending her as a LGBTQ ally, when in fact she allegedly did nothing when a gay staffer of hers was fired by the White House once he was found on Grindr.

So it seems Melania’s both solidifying her relationship with right-wingers while also trying to slyly stick it to her husband. You would think she’s trying to run for office in 2024, since she’s at least trying harder than her husband and several other politicians too scared to jump in against him first.

At least we can put to bed the claims that Melania is stuck saddled into a Donald Trump-centered world she didn’t sign up for. Turns out, she can make ridiculous decisions with no upside, and bad business deals all on her own. Just wait for the “Gaslight Gatekeep Girlboss” NFTs likely to come this summer!