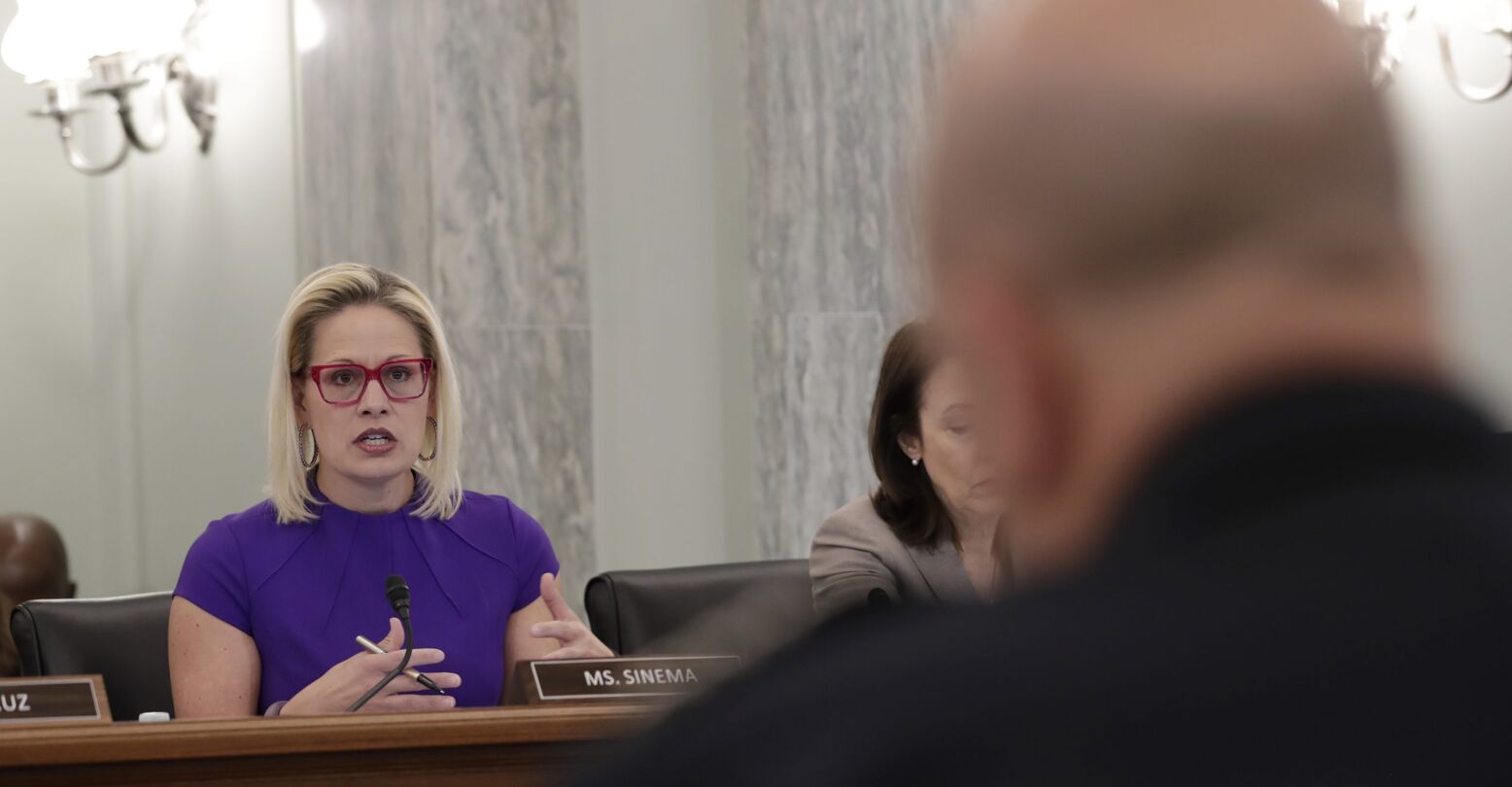 Democracy is hanging in the balance. The currently evenly-divided Senate is the only thing standing between people being able to somewhat freely vote for who and what they want in the future to come, or having any subsequent democratic powers controlled solely by state legislators and members of Congress, and almost half of the latter still cater to someone that doesn’t believe the election was duly administered.

Two people are keeping the Senate from one side clearly prevailing over the other. One lives on a wannabe-yacht, and the other is a powder room privacy pro.

Yep. Thanks to the excellent work by reporting from the Arizona Mirror, we have know learned key information about Sen. Kyrsten Sinema (D-AZ), one of only two Democratic Senators who opposes reforms to the filibuster, that may finally be key to getting her to finally answer to her constituents — and the rest of America.

On October 3, immigrant youth protestors of Sinema showed up at Arizona State University, where she teaches classes on, ironically enough, “Public Policy and Advocacy” and “Legal Issues in Social Work.” After being confronted at the end of her class, Sinema infamously ran to, and stayed in, the bathroom during much of their demonstration. Eventually some of the protestors joined her inside.

🔴BREAKING: Blanca, an AZ immigrant youth confronts @SenatorSinema inside her classroom, where she teaches @ ASU. "in 2010 both my grandparents got deported bc of SB1070…my grandfather passed away 2 wks ago & I wasn't able to go to Mexico bc there is no pathway to citizenship." pic.twitter.com/JDZYY2fOD2

While she continued to ignore them up until she left campus, people who either know nothing about how protests work or just support the fall of democracy condemned the protestors for daring to share restroom space with a sitting Senator.

Now, the Mirror reports that when “She made her way to a nearby bathroom… The move was intentional and calculated: Sinema told ASU police she intentionally went into the bathroom because she believed that recording someone inside a bathroom is a crime, Sgt. Katie Fuchtman wrote.”

In fact, Fuchtman wrote that “Sinema stated this was not her first time being approached in this way and that is why she entered the bathroom, knowing it was illegal for someone to record another person inside the bathroom.” Sinema argued that as soon as she stepped into the doorway of the bathroom, and the protestors kept filming, they had broken the law.

In actuality, Arizona law doesn’t exactly read that way. The Mirror found that the state law, Arizona Revised Statute 13-3019, and it reads in part, (emphasis ours) “It is unlawful for any person to knowingly photograph, videotape, film, digitally record… another person without that person’s consent… in a restroom, bathroom, locker room, bedroom or other location where the person has a reasonable expectation of privacy and the person is urinating, defecating, dressing, undressing, nude or involved in sexual intercourse or sexual contact.”

In other words, despite Sinema’s beliefs, simply being inside a restroom area when a camera is rolling outside of it does not explicitly constitute a violation of Arizona law. In fitting fashion, ASU Police didn’t care what the Senator think, and didn’t proceed with charges on that matter. (They did recommend misdemeanor charges against four protestors for other reasons, but prosecutors did not accept the police’s results and requested further investigation.)

Of course, Sinema and her office aren’t letting facts or reality get in their way, and they still maintain that Sinema was the victim of a crime. Even moreso, Sinema claims that while she “does not want [protestors’] lives ruined for a horrible mistake they made,” she “agrees she wants them held accountable.”

One protestor who spoke to Sinema while the Senator was in the bathroom, sharing her journey as an undocumented immigrant, may face “immigration-related consequences,” Sinema’s office acknowledge — but she still hopes the police will hold her and the other protestors “accountable.”

“I think she wants to be tough on crime, but also soft on immigrants — and to some extent, she’s not really convincing anyone,” immigration attorney Ruben Reyes told the Mirror. “In this particular issue, this is I think a consequence of making promises you didn’t keep to people who are desperate for a solution.”

In other words, the jig is up, Kyrsten. Over the last year, you’ve been able to hide behind claims that criticism of you, your actions, and your presence (or lack thereof in the Senate at times of key votes), has been sexist, even when it comes from women. You’ve been able to cling to a misconception that you’re progressive because you’re bisexual and used to organize with the Green Party. And apparently, you’ve been able to rely on your misinterpretation of a state law to punish anyone who tries to get straight answers from you in a way you don’t like, while you also avoid answering to the public in interviews, public appearances, and even the officials and leaders in the state you represent.

But no longer can you get away with these excuses, Senator. Pooping may be sacred, but you can’t hide behind it — and the protections that come with it — if you’re not actually undertaking the deed. You can’t use your ability to poop to fend off any criticism as “sexist,” because everybody poops. It’s also not progressive to support criminal charges against immigrants that you know will face deportation from it, let alone while using pooping policies for your own selfish needs. And trust me, the bisexuals caught on to your trick movements a long time ago.

Don’t use your excrement capabilities to play edgelord with our rights and protections.  Pooping is a human right — no, a human necessity — just like it is for people to approach and speak to those with power over them. You may not respect that, Senator, just like you didn’t respect the other ASU students in the bathroom at that time — that were likely actually using the bathroom — but you can’t use those necessities to protect yourself from accountability. Now that everyone knows your dastardly deuce-dropping dodge, you’ll have to find a new tactic to refuse answering to the public.

Or, you know, you could spare us the BS and say if there’s ever a chance in hell you’ll support reforming rules that were established by segregationists, and if so, what you demand so people can know whether democracy has a fighting chance in this country or not. Or just simply admit that you don’t actually want to support changing them, so we can know ahead of your Republican pals doing it as soon as they gain a minimum of one seat next winter after the midterms. Whatever you decide is  your choice, unfortunately, but our government’s ongoing constipation preventing anything constructive from getting done is getting really, really ridiculous.

Senator, if you — and any of your colleagues and supporters — don’t want constituents having to resort to following you into pooping areas to get answers for their life-or-death issues, or stool-blocking to prevent you from hiding behind your misinterpretation of the law, just come out and be honest with us. At least wannabe-yacht guy goes on cable news every week to play coy with everyone and pretend that there’s a chance he’ll do anything to substantially stave off fascism. You, however, are just playing his badly-imagined sidekick, and it’s a waste — of our time, our institutions, our thinly-protected democracy, of our poop protections.

It’s not working anymore. You won’t be able to poop out of this one, Senator. As the old wise proverb once popularized by Nicki Minaj says, “if you ain’t sh*tting, then get off the pot.”