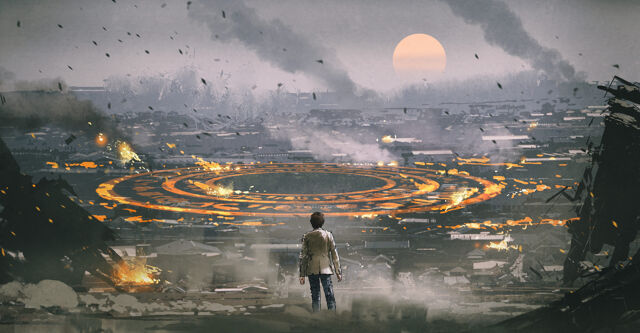 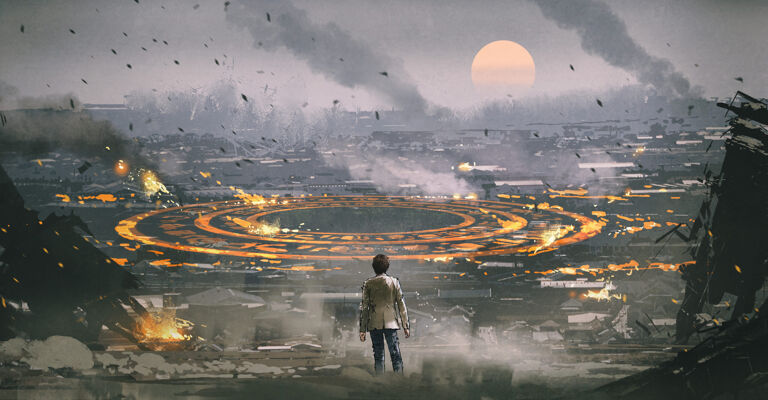 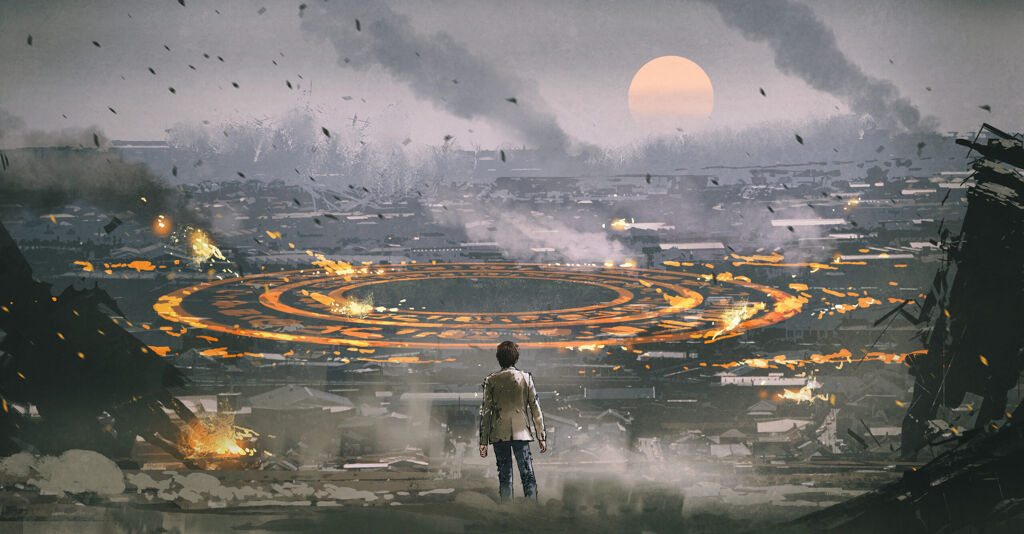 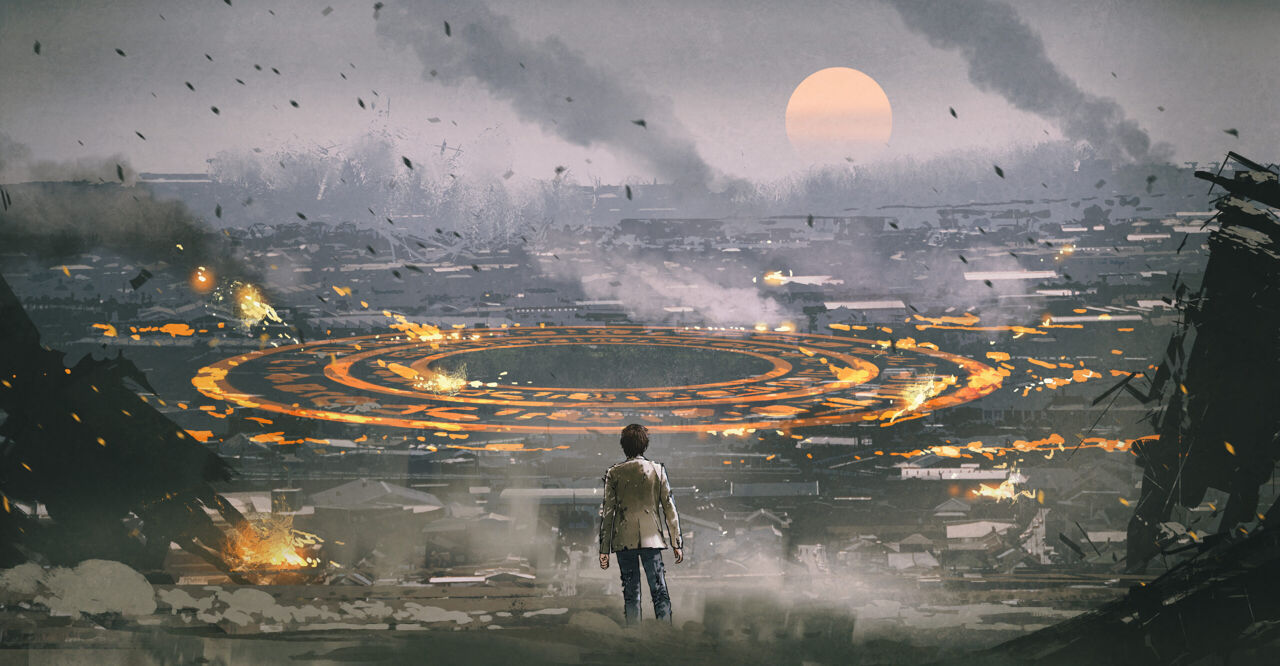 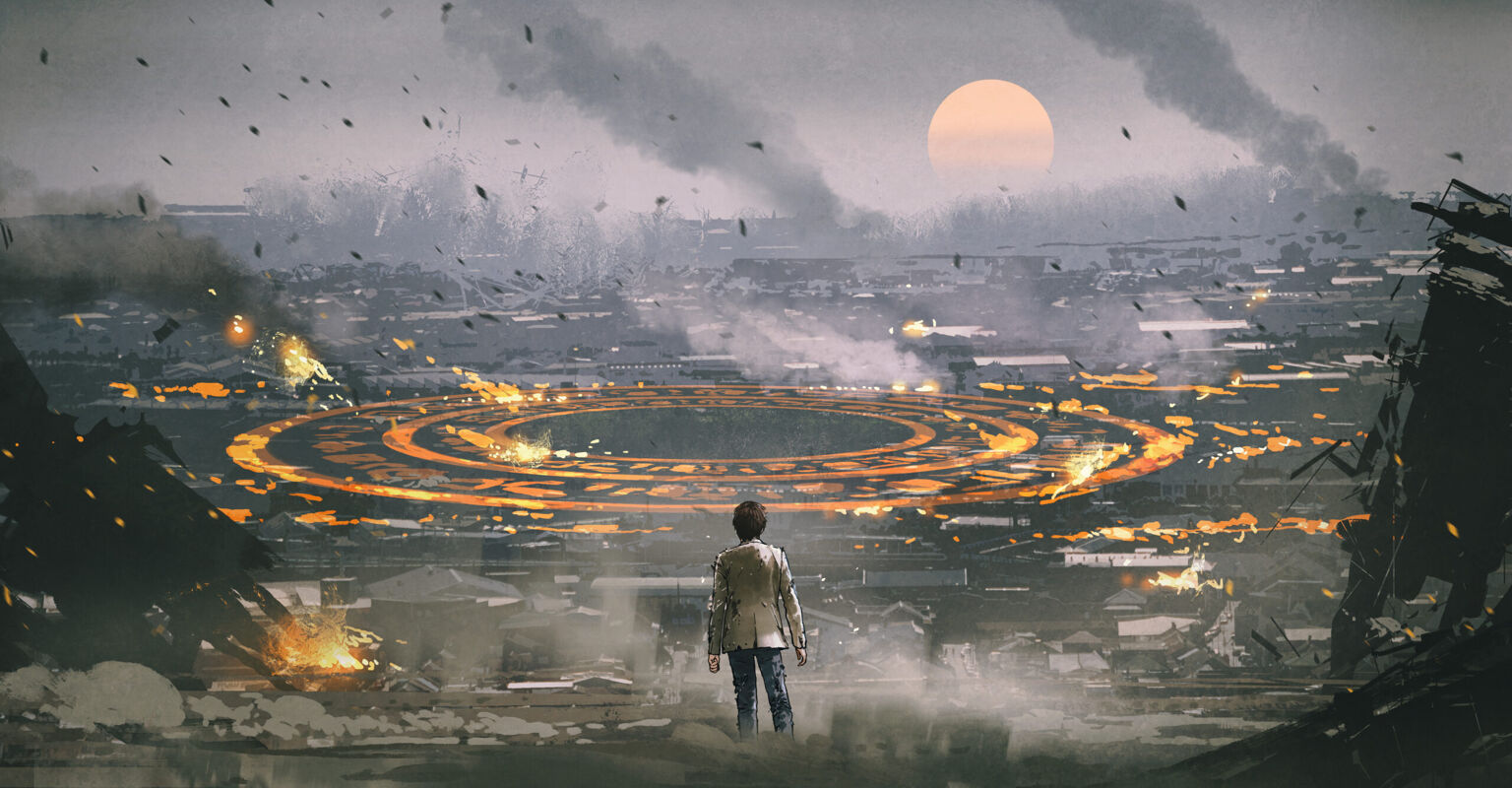 I stood before my church countless times, my father’s hands on my body, the congregants stretching their hands, straining every physical and spiritual muscle in an effort to convince God to give me his Spirit, signaled by a torrent of tongues. But He never did. I was the only one for whom this basic miracle would not, or could not, occur.

My God, my God, why have you forsaken me? Where is your Spirit, your love? The world closes in with its darkness and sickness and death, and you are nowhere to be found. I am an alien everywhere, knowing no one, unknown. You love all the world yet you have forgotten me… My mind twists and my heart breaks with a pain that will kill me, eating me from the inside out, destroying my soul, making me a lifeless body, moving through the world a ghost.

I’m a child of the apocalypse. Raised by sectarian fanatics into the dogged fight against the powers of evil—articulated as a set of threats suspiciously intertwined with the anxieties of American Christofascism—and confronted with the Bible, bullhorns, and bombs. We were all exorcists. From the bodies that writhed and screamed at our altars, to the cultural malevolents that tried to poison our souls with worldliness. Biblicism was the antidote, and that particular brand is heavily anti-intellectual, folksy and masculine in tone, and best done from a star-spangled Patriot’s Bible. Out of a neurotic fear of sin, we couldn’t watch Finding Nemo. Or anything else. No TV, no social media. The threat was too great.

We were supposed to live as if the end was nigh.

On the Mexican-U.S. border, in Yuma, AZ, we awaited the apocalypse, every moment anticipating the rapture. Of course, there was levity in practice, but we were supposed to live as if the end was nigh. My father, the pastor, still has not retired at 67 because he believes that Christ will come. (Indeed, let it be so.) But brimstone—that was the great motivator. Fear pervaded the life of the church, and mine. What else could a child imagine, what peace could one have, when one knew what hell looked like because it was depicted in our street skits, our park plays, our haunted houses, our movies, and our sermons? The world was hell, and we all waited for our rescue and its destruction.

Yuma, as a border town, is something I still struggle to explain. It has the highest unemployment rate in the nation. It’s home to the cartels, and a high school called the “Yuma High Criminals”; the football team charges the field with a cop car chasing them, many of whom are and will be criminally involved. (Everyone I grew up with is either in prison for years to decades, or a cop.) 120 degrees in the shade. We didn’t just hide under desks, but did drive-by drills at recess where the alarm sounded and elementary schoolers hit the playground dirt. My friends and their parents would suddenly disappear, claimed by the hunters of immigrants.

The world was hell, and we all waited for our rescue and its destruction.

My sister ran drugs, did drugs, drove through the front of a convenience store, smashed into a tree just before crashing through someone’s home, “assaulted” a police officer (please, she’s 5’4”, 100 lbs. and drunk), went to prison, and a halfway house. She’s courageously trudging through now, on her feet, struggling to love herself as a lesbian woman who grew up how we grew up. I have two brothers. They have beautiful families. They still go to that church.

But Oregon is where I was born, where I left when I was 4, where I returned when I was 14. Oregon is unsurpassably beautiful, but one can feel the blood in the soil in a way I have never experienced anywhere else. Their names linger: Champoeg, Klamath, Yaquina. Our settler church, manifesting our destiny, destroyed what refused to be assimilated. I played in bands, went on outreaches, testified and toiled for the work, but was ultimately rejected. I was pushed out because I began to wonder. In a real and honest way, I wondered who God was and who we were. None of them had really thought to ask. In a process that my parents say was the most painful of their lives, I left the church.

My friends and their parents would suddenly disappear, claimed by the hunters of immigrants.

This is a dark and uneasy atmosphere, but be assured I was rescued. It’s no longer my reality, by the grace of God, but it absolutely was. I was given so much more.

Way back in the former days, an old prophet gave me a book. Standing in front of this community that, in some twisted way, both despised and wanted me, the old prophet came down from the pulpit and gave me a book. He gave words of knowledge. Told people things about themselves that no one could know. He performed physical healings and exorcisms, which are the same thing. All eyes watched as he clambered down the steps to the altar and gave me a book: The Man Eaters of Tsavo. It’s about some human-eating lions in a region of Kenya, chronicled by a colonialist. The prophet said that there is profound fear in this generation, and that I would lead people out of it. He died in his hotel room, alone. His words probably meant nothing. But who can say?

In a real and honest way, I wondered who God was and who we were.

My sense of call hasn’t come to me so easily. Because to what can the dead be called? The Zapatistas talk about fear and death. They say, “We are already dead. So what do we have to lose?” And so the dispossessed take up their guns. George Jackson said something similar. Countering the Black liberals who eschew revolution because so many Black people would die, he says, “We always have done most of the dying. The point is now to construct a situation where someone else will join in the dying. If it fails and we have to do most of the dying anyway, we’re certainly no worse off than before.”

Jesus joined in the dying. No spiritual metaphor here, no mere analogy to worldly suffering. A political life, lived out under the heel of empire, incarcerated and executed as a subversive. He turns to us and demands, “Take up your cross,” which is to say, “Become a criminal. Become an enemy of the state, and die.”

If we’re looking for a call, why not start with death?

How can God show up to a world traumatized by the church? Historically and intimately, the church has besieged and broken people and communities. That history is coming to light alongside an increasing recognition of the church’s failure to narrate anything compelling to new generations. Individuals have their trauma, too. Most of my friends, made through public school, sports, or music scenes, have a history with that church that involves severe, raw pain. They miss God, though. They’d never go back, but they miss God. Somehow, in the face of the church’s anti-Christ witness, God has still shown up in their lives—but they have no place to explore, to practice, to transform themselves and the world.

How can God show up to a world traumatized by the church?

Pew research tells us that fewer people are identifying with institutional religion than ever before. That’s well-known. But what’s more interesting is that people identifying as having some kind of spirituality is on a meteoric rise—far more than in the last couple of decades. In other words, people are leaving religion, but more people are interested in spiritual life overall, including the dwindling religionists and the “nones”. This means that people are open. They’re searching, they’re hurting, they’re needing, and they’re rejecting the church for good reasons—for reasons which will not be addressed overnight, if ever.

This means that people are looking for something new, for a radical transformation of our social, spiritual, and political lives. Think about the ascendency of abolitionist sentiment: abolish prisons, abolish the church, abolish capitalism; create a new world. The church is overcome with fear. But the Spirit dances.♦

If you are looking for a place to explore spirituality that is grounded in queerness, in mystical mystery, in liberation struggle, reach out to me at @firelightcomm on Instagram.