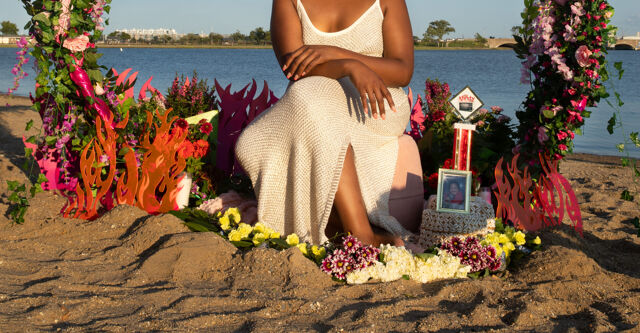 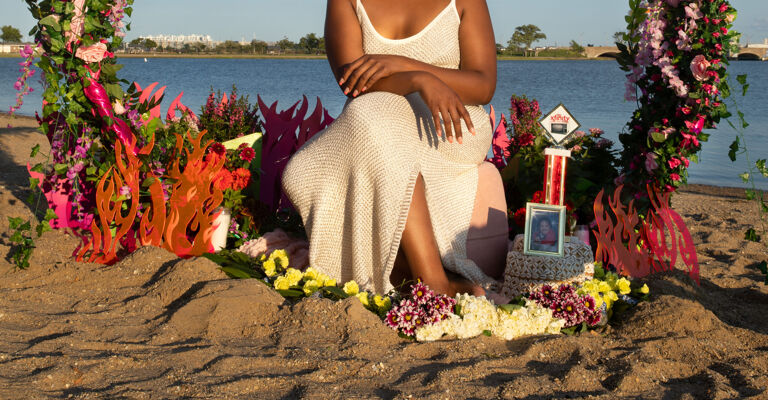 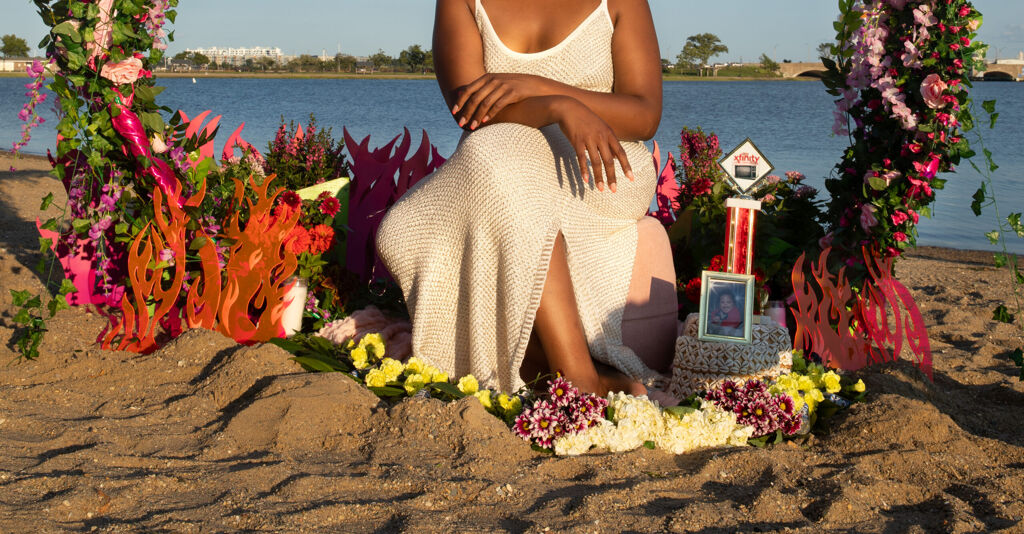 To let local newspapers tell it, Malibu Beach has long been a source of ridicule and a target of neglect by the city of Boston.

One gathers, from this negative coverage, an idea of a place where one might find a dead body or get stopped by the cops. It is a “sobriety checkpoint” for Boston police. It was, in the eyes of Dave Wedge in 2005, “a disgrace.” Occasionally, it was “making a comeback.”

In 2021, UnBound Bodies, a collective composed of five Black and brown queer and trans artists in Boston, memorialized the Malibu Beach they knew: a site of Black queer and trans life. Malibu Beach became home to the Living Altar, both a public art installation and a celebration of life while the person is still alive.

It’s a struggle to describe a project so unique: It would be wrong to say these installations memorialized their subjects, because they are still living. We are so unaccustomed to people getting their flowers while they are still alive that there’s no easy way to describe the work of this project.

As part of UnBound Bodies’ larger Roots and Futures project, the work coalesced around the question of how to “take over spaces” so that Black queer and trans people could be who they are in public. Living Altars took many forms, including a human cheese board, a public gardening project, and a procession to a graveyard.

“They were each a little somethin’ special,” says collective member Kamaria Weemz. “We were making intentional connections to our lineages that we didn’t grow up with. Someone in the family was queer but it wasn’t talked about. I’m giving myself that memory back.” Weemz believes this is a way to “mend” their connections to and within the city.

These connections came up again and again as a core driver of the project. The group organized kikis, communal social gatherings, to soothe the “mutual longings for community” they saw in the city. Some participants in the Living Altars part of the project became involved as a result of these conversations.

UnBound Bodies erected the altars with the understanding that they were as entitled to use public land as the city was. “Public commons should actually be common space,” said bashexo, a collective member. The Living Altars were a way for them “to continue their Lucumi practice of altar building [and] pay homage to ancestors and contemporaries.”

Altars, in some African diasporic traditions, are deeply personal and private spaces. Others are public gathering places that form the center of houses of worship, or communities themselves. They are often intricate and time-consuming to build. The practice of altar building is at once an act of ancestor veneration and a call for a deeper relationship with ancestors. Some altars cannot be photographed, or even seen by those outside of the family and community.

Malibu Beach became home to a Living Altar, both a public art installation and a celebration of life while the person is still alive.

So what does it mean to build an altar at once inside and outside of those paradigms? How does one go about communicating with ancestors through revering living people? Or, as bashexo asked before undertaking the project, “how do we do this in a way that’s harmonious to our spirits?”

“We had a responsibility to everyone, and that can be hard to hold spiritually,” remarked J.D. Stokely.  The collective’s goal was to build altars that “connected to the land, connected to spirit” and “connected to community.” In doing so, UnBound Bodies raised new questions about the land as an ancestor and community as an investment in future ancestors.

The practice of altar building is at once an act of ancestor veneration and a call for a deeper relationship with ancestors.

It also highlighted Boston’s history as a site of colonial and racist violence. The collective operated from their desire to take an “overwhelming colonial space and fill the air up with something else.” In taking this work on, they believe they can “remap” Boston in the image of its Black Queer & Trans residents.

“This remapping onto Boston, the meaning and specificity of the folks we were honoring” meant that “those memories would be imprinted,” said Weemz. “Hopefully people would notice and have a different experience and a different depth of memory there.”

“We were capturing memories with words and places in a city that has tried to erase Black people,” Stokely added.

But the project wasn’t only shaped by the installations themselves: Photographs and ephemera left at each sites continued to tell their stories even after the project had ended.

“Different pieces stayed up different amounts of time,” the collective explained. UnBound Bodies left flower crowns, juju bags, and other created objects behind, perhaps also in the project of remapping.

Golden was the primary photographer for the project. Golden’s photos try “to capture a moment between something.” They celebrate the “breath” and “being” in the portraits they created for the show.

“We were capturing memories with words and places in a city that has tried to erase Black people.”

Like UnBound Bodies, Golden invested in the collaborative aspect of the project. Their “little portals” allow Black people to see “a lifeline,” and “a document of a living.” Golden shared their lush and personal photographs with Living Altar collaborators and on social media. These practices prioritized access and audience over more inaccessible options, such as galleries.

This “visual queer aliveness” as bashexo called it, extended past the participants and the community to the land itself. “The site has energy, has spirit, has needs,” they explained.

The collective tended to those needs by tending to parks through a gardening project in Codman Square Park, cleaning beaches and parks, doing trial runs of some altars, and even through woodworking. All of this served to prepare the selected spaces for a Living Altar.

While planting flowers in Codman Square to make an altar for performer and storyteller Mercédes Loving-Manley, bashexo recalls, passersby remarked on the novelty of such improvements in their Dorchester neighborhood. “They said ‘the city never does this.’ We told them ‘we’re not [here] from the city’s Parks Department.”

Dorchester, where Malibu Beach and Codman Square Park are located, is a majority-Black community that boasts the third largest population of LGBTQ+ people in Boston. Unlike other communities in the city with large queer and trans populations, nearly a quarter of Dorchester residents live below the poverty line.

UnBound Bodies’ Living Altars filled in the gaps left by racial bias in a city that often leaves its Black residents out. This is itself a spiritual act.

“We have evolved how we think about altars through this project,” said collective member Simone John. It was “an altar to memory, to time, to futurity,” Stokely remarked.

The project provided “that feeling after a church day,” said Golden. “It’s in a legacy of praise.” ♦

Cyree Jarelle Johnson is a poet and tarot reader from Piscataway, NJ. SLINGSHOT, his first book of poetry, was published by Nightboat Books in 2019 and won the Lambda Literary Award for Gay Poetry. Find him online at cyreejarellejohnson.com.

Photos by Golden in collaboration with UnBound Bodies.