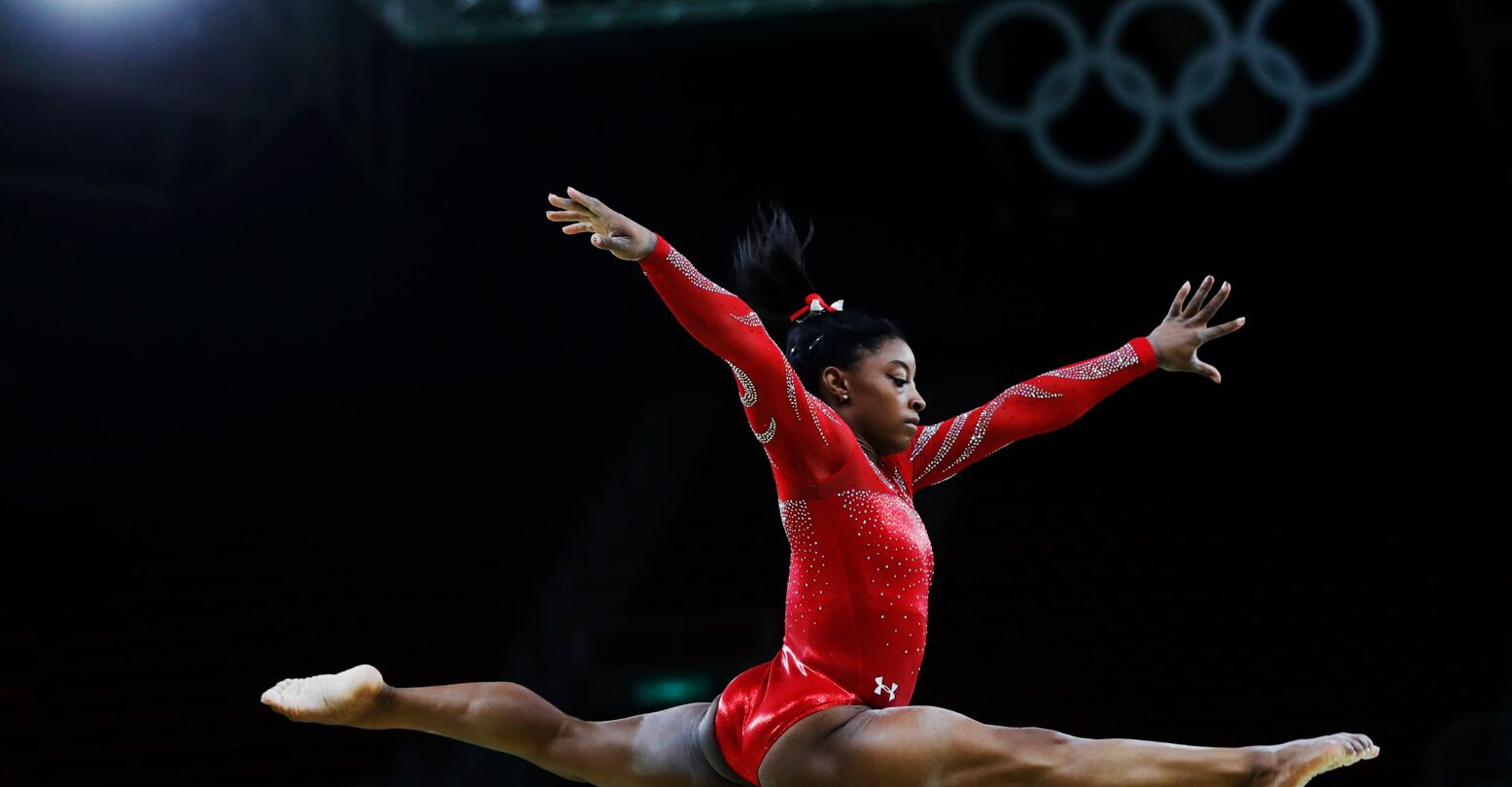 Simone Biles is an Olympic athlete of legendary proportions. She’s so good, she even has her own signature move: the dazzlingly dizzying Yurchenko double pike, And while she is titled accordingly as the most renowned gymnast to ever compete, she is also a twenty-four-year-old woman restricted by the distinctly limited human capabilities we all share.

Like the rest of us, Simone Biles is stuck on a floating rock that never stops spinning, and to that respect, gravity affects her just the same as us mere mortals. Still, she propels herself through the air, unrivaled in her ability to land moves most gymnasts wouldn’t dare attempt.

Even though Biles entered the 2020 Tokyo one of five female gymnasts representing the USA in the team competition, her sole competitor worldwide is herself. Within her unmatched status lies the reality that Biles must only be a better athlete than she herself was the day before. A curiosity tinged with awe invites fans and skeptics alike to wonder if Simone Biles could possibly ever fail when she alone is her biggest rival.

After anticipation following her standout collection of gold in 2016 at Rio, Simone Biles takes over the Tokyo Olympics with her final answer for those who have doubted her steep upward trajectory. In an unexpected withdrawal from Tokyo’s individual all-around gymnastics competition, the four-time Olympic gymnast did not bring home her weight in gold but instead will return to the USA toting around something of even greater value – her mental wellness.

USA Gymnastics, on behalf of Biles, released their statement detailing her decision to withdraw for mental health purposes on Wednesday (July 28th.)

“After further medical evaluation, Simone Biles has withdrawn from the final individual all-around competition at the Tokyo Olympic Games, in order to focus on her mental health. We wholeheartedly support Simone’s decision and applaud her bravery in prioritizing her well-being. Her courage shows, yet again, why she is a role model for so many.”

Her difficult decision came after she had a noticeable stumble on the first vault event of the team final. Upon leaving the bright white Olympic lights and media behind, Biles casually typed out a concise but clear message about her vault stumble in the team final to her beloved fans on Instagram, “it wasn’t an easy day or my best but I got through it. I truly do feel like I have the weight of the world on my shoulders at times. I know I brush it off and make it seem like pressure doesn’t affect me but damn sometimes it’s hard hahaha! The Olympics is no joke!”

The widespread shock of a mistake didn’t seem to surprise Biles; who after undergoing a medical check for physical injury revealed to the press she wouldn’t be competing in the rest of the team final. Soon after, Biles informed the public she would be withdrawing from individual events as well because her mindset had been feeling off before the Olympic final itself even began:

“Today has been really stressful. We had a workout this morning, it went OK. And then just that five-and-a-half-hour wait or something, I was just like shaking, could barely nap. I’ve just never felt like this going into a competition before. And I tried to go out there and have fun. Warmup in the back went a little bit better. But then once I came out here, I was like no, mental’s not there, so I just need to let the girls do it and focus on myself.”

For Simone Biles, the personal and mainstream media favorite out of all of Team USA’s athletes, the pressure to be perfect pours in from every angle. Not only must Simone be the perfect athlete in terms of tactical execution, she must also perfect the art of conducting oneself in the public eye.

Apply the concept of critical evaluation to our very bones; imagine if they could feel themselves perform, feel how they fail us when we fall. With the fragility and clumsy nature of the human body, bones would crack from the mere guilt of eventually letting us down by inevitable mistake. It would be a disorder. And yet, our logic regarding pressure becomes entirely different when applied to the brain and bodies of Olympic athletes – the ultimate money-making spectacle.

Simone Biles’s decision to prioritize her mental health over all other expectations forced upon her is the epitome of radicalized self-love; particularly when considering the extent to which America’s desire for perfection is projected onto her as a symbol of Team USA.

At the end of the day, when the crowds of public interest eventually disperse, Simone Biles will happily stand alone – and she will love the aging body that housed her more than the decorative medals of momentary success placed on it.