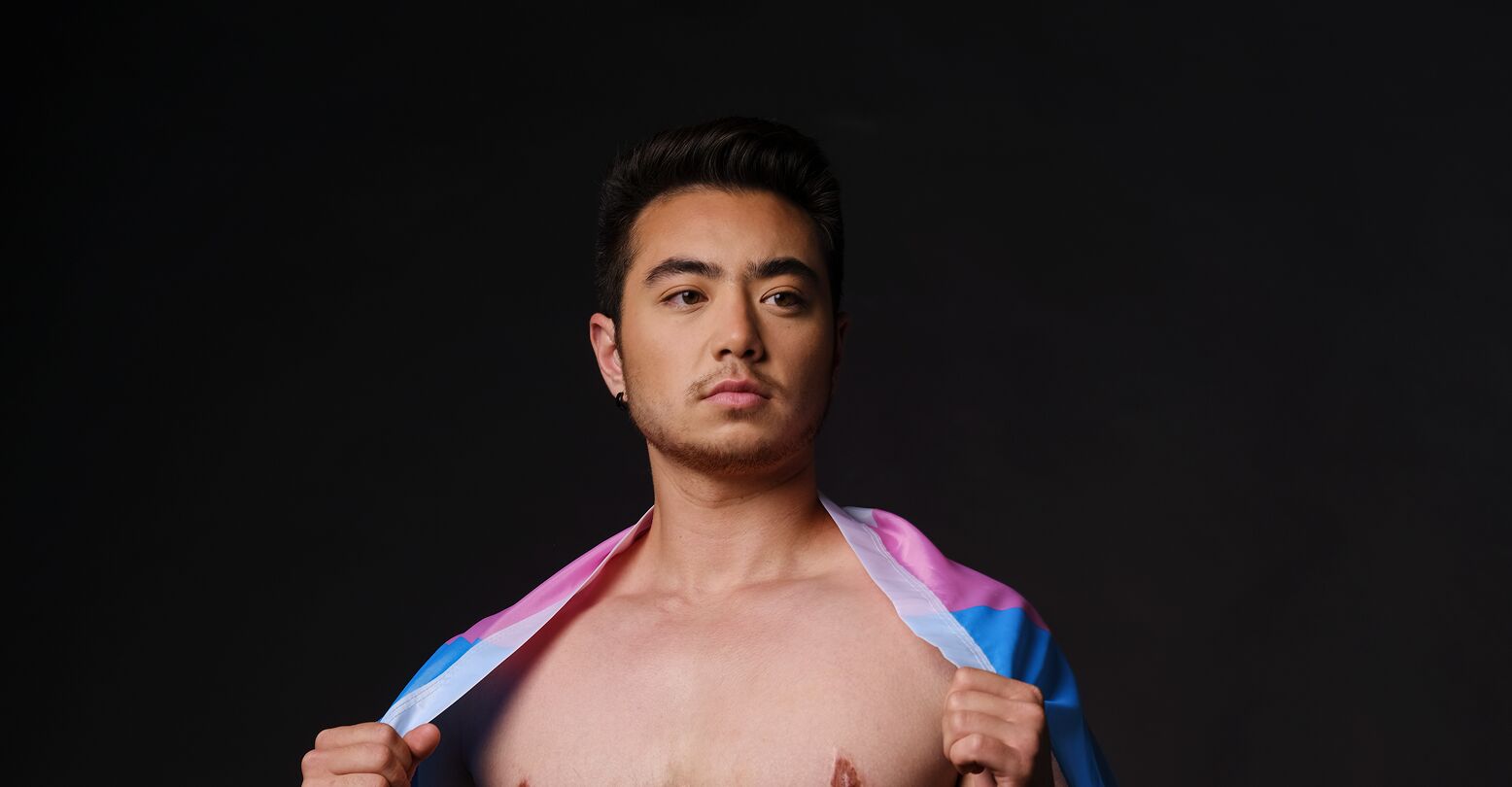 Since becoming the first trans athlete to compete on any NCAA D1 men’s team, Schuyler Bailar (he/him) has become accustomed to telling his story. Behind his storytelling is not just a trailblazing swimmer, but someone who has continuously advocated for trans inclusion in sports. As a speaker, educator, and activist, Bailar knows that education can bring about change. That’s why he developed LaneChanger.

LaneChanger is a digital gender literacy training platform designed to educate others on transgender topics and promote the development of safer spaces for queer and trans people all over. With over 40 online modules and subscriptions starting at $300, LaneChanger gives users on-demand access to Bailar’s unique education style for schools, organizations, and teams to utilize and transform gender literacy for the masses.

INTO spoke with Bailar about LaneChanger’s impact on gender literacy, the recent bans barring trans athletes from the sports they love, and his hope for the future of trans education in sports.

You’re no stranger to public speaking, activism and, of course, being an educator. LaneChanger combines all three of these. What influenced you to bring about this digital platform called LaneChanger.

So I have been educating on trans inclusion, especially trans people in sports, for almost eight years. And over the course of my journey as the first openly trans athlete on a D1 men’s team for all four years, I had this experience. I began speaking about it, I began sharing about it, and I’ve given up to over 400 speeches to date and I found that these speeches have had a lot of impact on people, specifically in bringing just awareness about trans people, to start with, and then hopefully action and advocacy.

Anybody can sit down anywhere that has access to a computer and essentially meet a trans person, because the course is designed in the most personable and accessible way that I could think of, which is through storytelling. The goal is for me to hand somebody my humanity, say, “Here’s who I am”, and maybe even through doing so, help them introduce themselves to themselves. I actually think that when we limit the humanity of others by trying to take away others’ rights, we actually limit our own humanity by doing so. 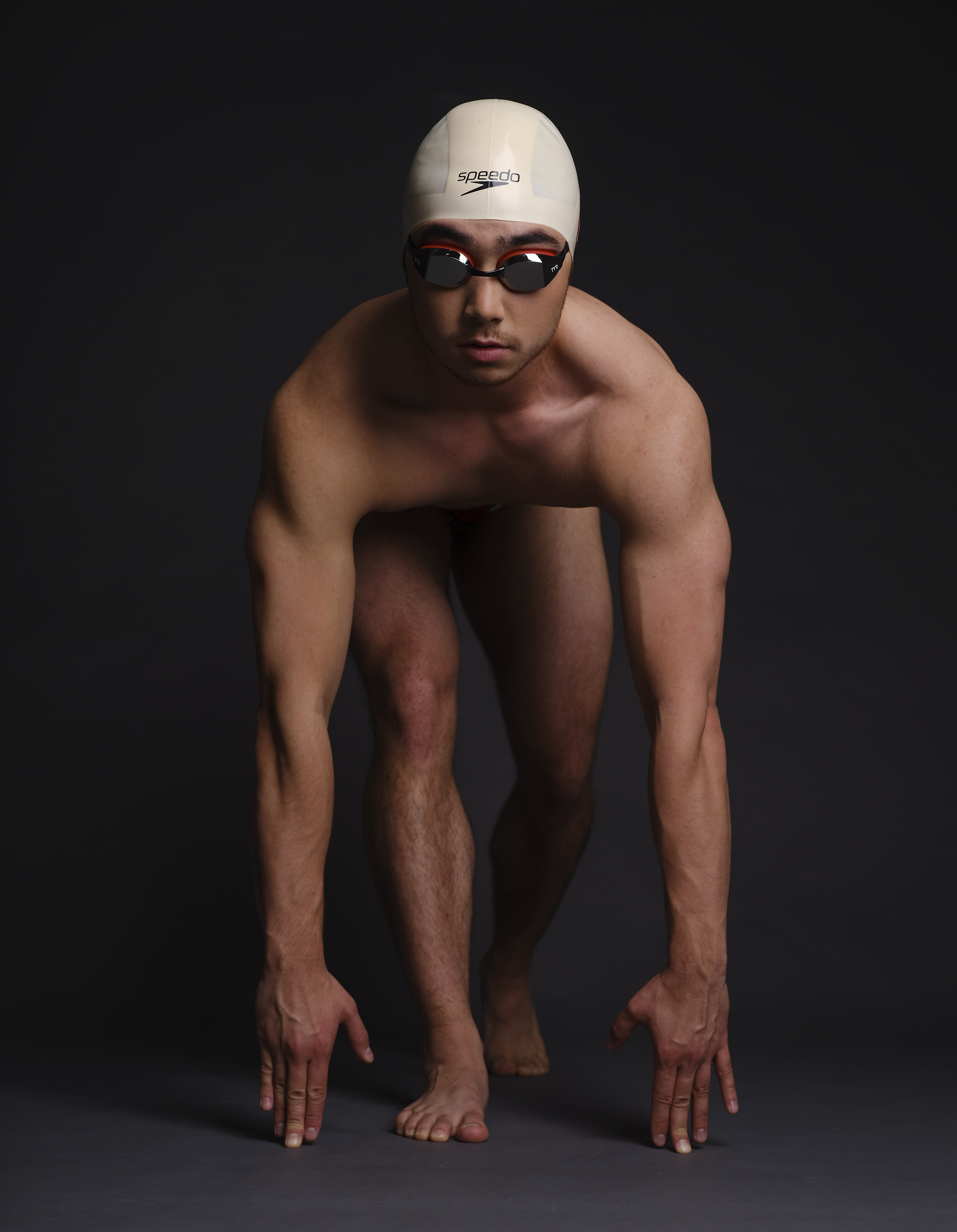 There’s more anti-LGBTQ legislation out there policing the bodies of trans students and policing LGBTQ education. However, your platform could be a game changer for many queer and trans youth. What impact do you hope it will provide different school systems?

I have a number of hopes. The first thing is that when I talk to adults, sometimes even with kids, I spend about 15 minutes telling people my story so they’re situated in a person’s story, not just about all these facts and these words. I tell my story, and then I say, “Okay, who knows what the word transgender means? Raise your hand if you can define it”.

When it’s adults, pretty much nobody raises their hand. Yet, we have a country with nearly 100 anti-trans bills with people saying that most people don’t believe that trans people are actually the identity that they say they are.

If you can’t even define the word transgender, how are we supposed to have these difficult conversations? How can we even begin to understand the humanity of these people, of us, if we don’t even know how to define the words we’re starting with or the word that encapsulates the entire experience? I have found that there is a massive lack of very basic gender literacy, and that’s why I’m calling LaneChanger a gender literacy education tool, because it’s about starting with just these very simple words.

LaneChanger isn’t just for schools, but can be used within businesses, nonprofits, and sporting teams. What does the impact of LaneChanger look like for these places?

I think LaneChanger can be impactful in many different arenas. I think schools because kids need access to this education, but schools aren’t the place where it’s going to be difficult for the kids to learn. Kids are actually primed and ready to learn these things. In fact, most kids do know how to define the word transgender. They just need context, they need education and they need examples of other kinds of people.

I think, oddly enough, it comes down to the same core value, which is that when people are able to respect others and able to feel respected, they’re going to be better at whatever it is that they do, right? So if we’re talking about a corporation or company and a person is coming to work every day and dealing with transphobia, that person is going to be a lesser version of themselves. And when they are a lesser version of themselves they’re going to produce less.

It’s good for the wallet when you accept people and when you create a welcoming environment. So LaneChanger is part of that because right now, we don’t have massive systems in the country to produce safe environments, understanding environments, and educationally competent environments for trans and queer people. 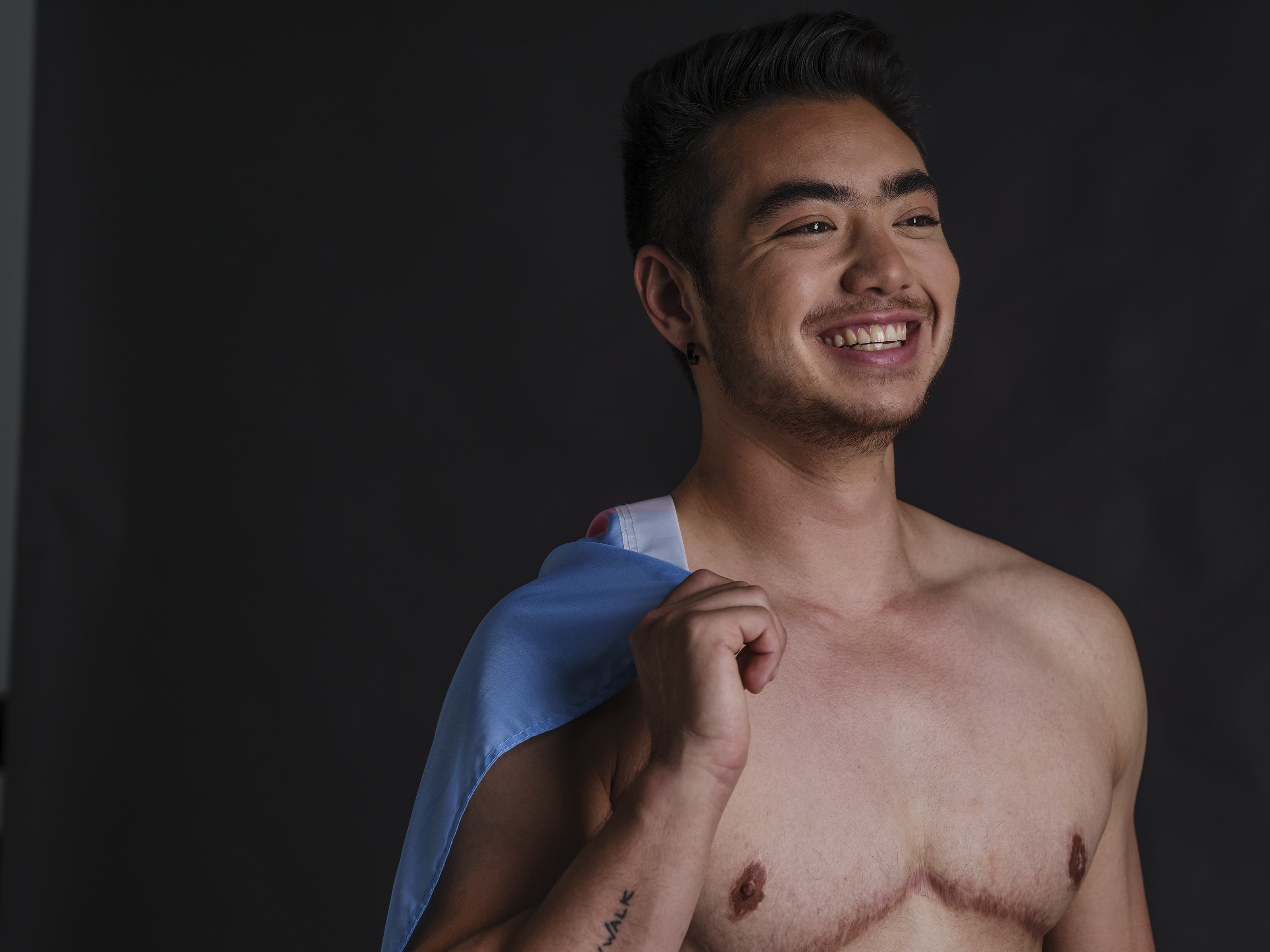 The International Swimming Federation announced a ban on trans women competing in major competitions. As a fellow swimmer, what went through your mind when that was announced?

Yeah, that was devastating. Surprising as well. Surprising not because transphobia is surprising these days. It’s not, but because it was more extreme than I had expected. I had expected some kind of ban or some kind of restriction on trans women in water sports, but I hadn’t expected it to be this extreme. So, it is the most extreme trans athlete ban we’ve seen specifically on trans women in the past decade, I would say.

The morning I read that release I was literally wearing a shirt that said “Trans Athlete” across it. I was actually getting ready to go to a pride event and I was like, “How can I walk out on this pride parade trying to cheer and to be joyful in my trans joy, while people like me are getting banned from the sport that I love?”. So it was really hard. I spent a lot of the day in and out of tears. I spent the whole day in and out of press interviews.

But in any case, I think it was very hard and I think it is still very hard. I have friends who are looking to compete in international swimming competitions and they will not be able to unless this rule is shifted or they’re going to have to be in the open category, of which we have no idea how that’s even going to work.

What comes to mind seeing fellow D1 swimmers, like Lia Thomas, and other trans athletes navigate these recent transphobic attacks and policies?

I have been saying that my story is proof that one can both do what they love and be who they are, especially as a trans athlete. That’s no longer true and it gives me angry goosebumps to even say that and to reflect on that in this moment every time. In many states, 18 to be exact, as far as I last checked, trans kids cannot play in sports aligned with their gender identity.

Right now, Lia can’t do what she loves and be who she is. She would have to revert back to the men’s category or she’d have to go to the open category, which is not the same thing. I think there’s just a lot of grief that I’m experiencing right now. And I think that the reason I continue to do the work that I do and the message I want to share is that we will persevere. I do think we will win one day.

We can go on and on and on about the hundreds and hundreds of bills and pieces of legislation by white, cis, straight, rich men in power who are trying to control anybody who isn’t them. This is why LaneChanger is important. We have a greater problem in the world of white, cis, straight, mostly rich men who are panicking that they’re losing their power. And they’re panicking over people like me and anybody else who doesn’t match them.

When they see us realizing we have power and when they see us knowing our truth, that disrupts their sense of power. And it actually disrupts their power directly. Because when we know who we are, they no longer can tell us who they think we are and who we should be. So I do think we’re still moving forward. And I think it’s really powerful to remember that, because if we don’t, it’s very easy to feel hopeless. And I feel that often. 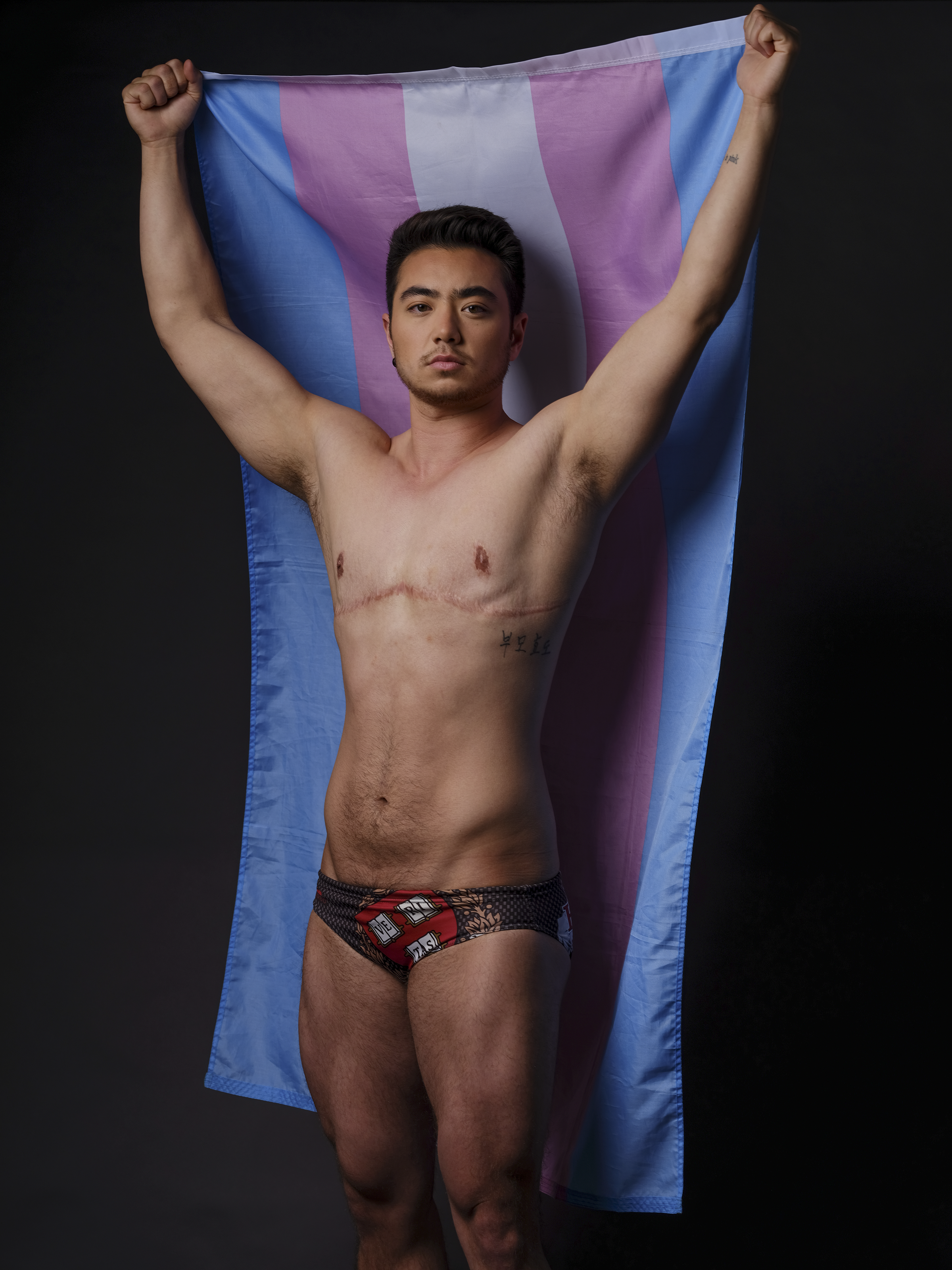 What do you hope for the future of trans education in sports and what role do you think LaneChanger can play within it?

I don’t see that LaneChanger necessarily changes everybody’s mind immediately. I think that would be unrealistic of me. But I do hope that it changes people’s minds to some degree. I think it’s unrealistic to say people look at a training and be like, “That’s it. I love trans people now”. But I do think that it’s reasonable to expect that most people will watch LaneChanger and think, “I actually think I can connect with a piece of that. I actually think that trans people are human”.

And I know that sounds very basic, but it is the start and it’s so important. I’ve seen it repeatedly in my career as an advocate, as a speaker. With every, single speech that I’ve given, somebody comes up afterwards and they’re like, “I didn’t want to be here, I didn’t like you, and I didn’t like trans people. And I heard about this, I was uncomfortable, I came here and I listened to what you had to say, and I realized I feel that way too. I also felt like I didn’t belong in fourth grade. I also didn’t know what clothes to wear in 8th grade. I also struggled with my mental health in this way or the other. I also feel like I’m not man enough or I’m not this enough or whatever”.

These are universal experiences. [People] always tell me, “Wow, I realize we actually have a lot to connect with”. That’s what I want people to take from LaneChanger. And once they’ve taken that, then the rest can follow.

When we discriminate against other people, we are actually limiting our own humanity and our own expression of ourselves. So when we all can let the full spectrum of humanity in by being kind to others and by being respectful to others, we actually can all move forward together. That’s the goal. 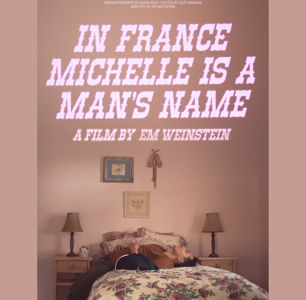