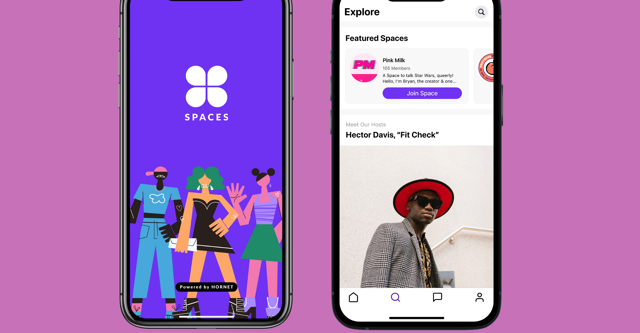 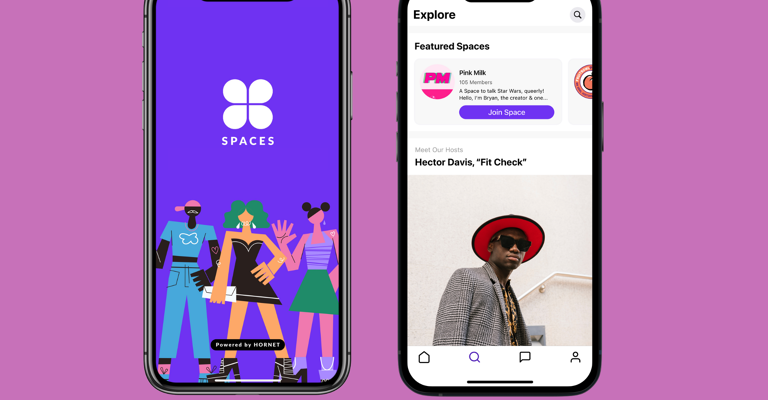 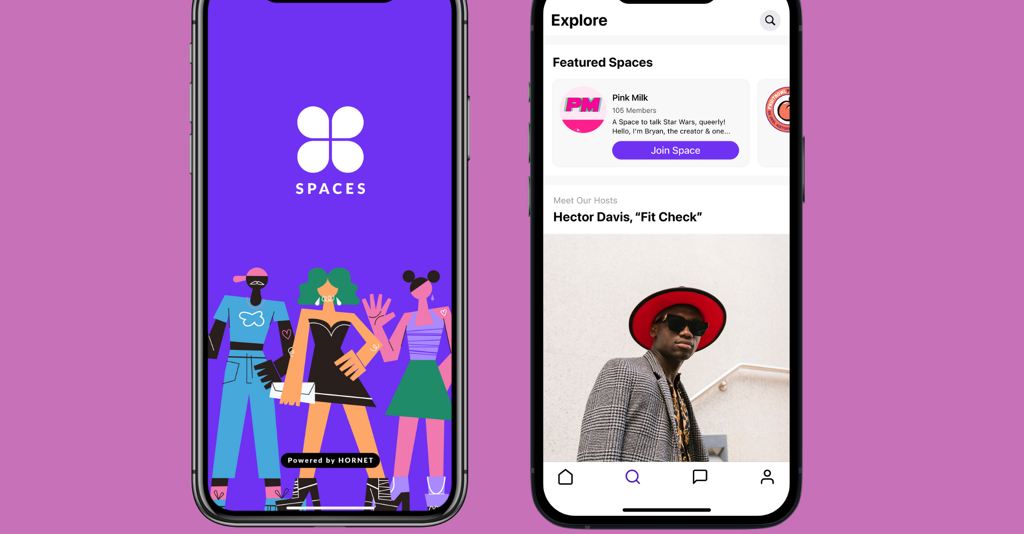 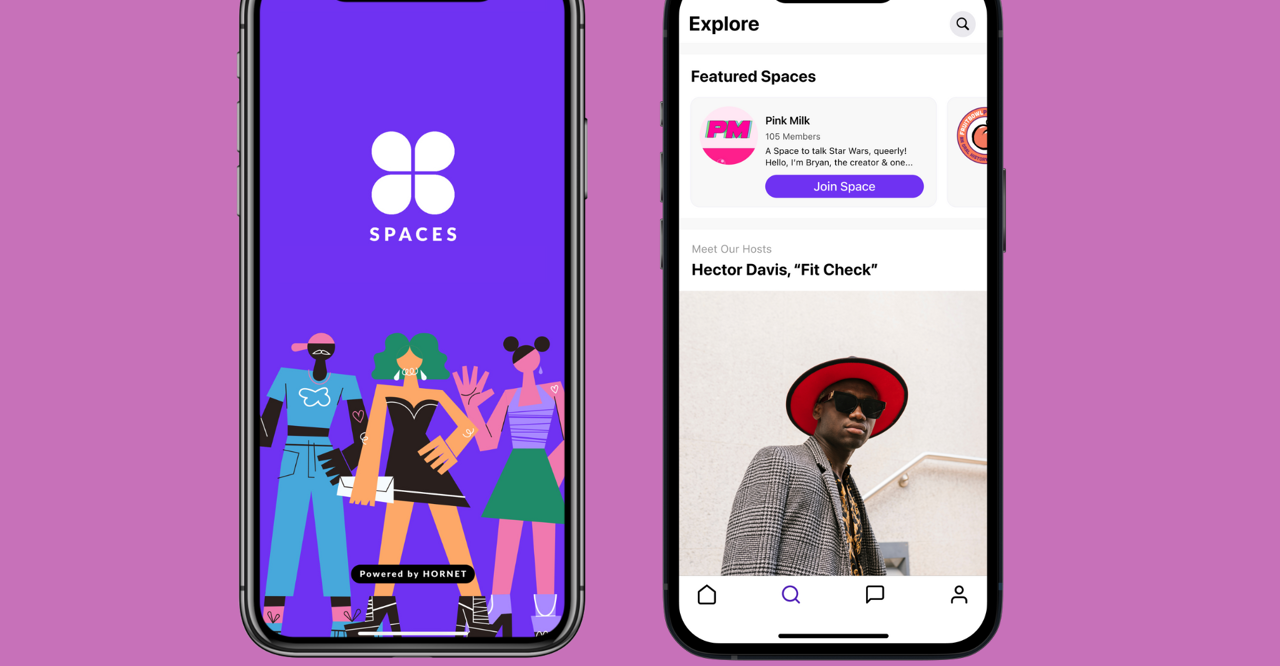 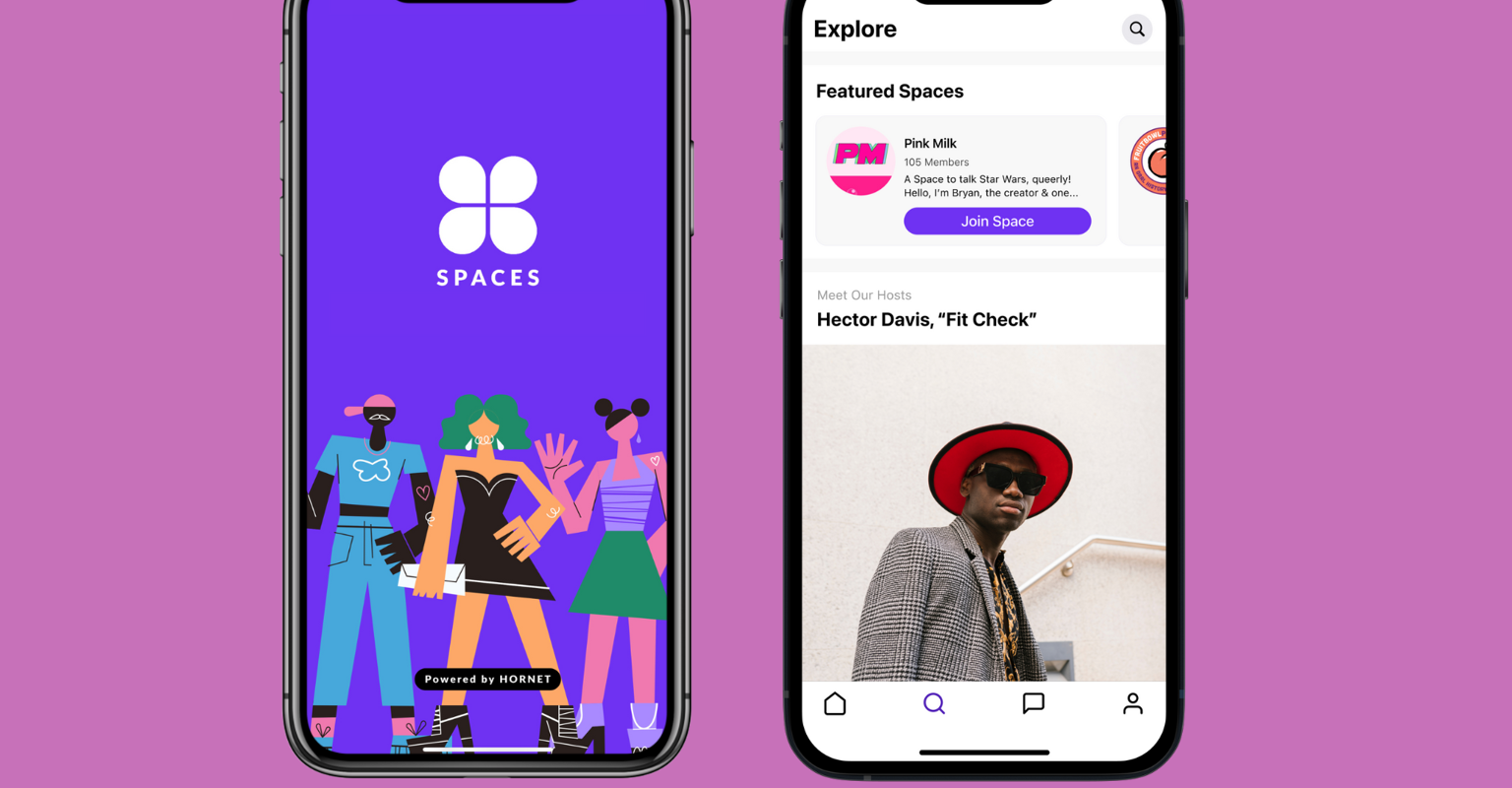 Being online as a queer person is—as I probably don’t have to tell you—quite the mixed bag. While it can be a wonderful place to find community, it can also be a horribly toxic place easily infiltrated by trolls, bigots, and jerks.

That’s what SPACES, queer social app Hornet’s new platform, hopes to fix. Not only is SPACES better suited to minimizing and preventing attacks on queer and trans folks than traditional, straight-centric social networks, it’s organized around individual interests and identities.

INTO chatted with SPACES community manager Shon Washington (@gayblackvet) is one of the creators making SPACES a great place to be.

How did you get involved with SPACES?

I originally started at our sister company Hornet Networks (the company behind queer social network Hornet) in December 2021. One of the things that excited me during that interview process was how they identified a demand for a new queer social media platform — one that isn’t dating-focused — that allows for community building. A place where the typical harassment LGBTQ+ folks can experience on other platforms is mitigated. That vision, and the passionate way they spoke about this very real need, is why I joined the company. As the project grew closer to being realized in January 2022, I moved from Hornet to SPACES as the manager of our Business Development team. 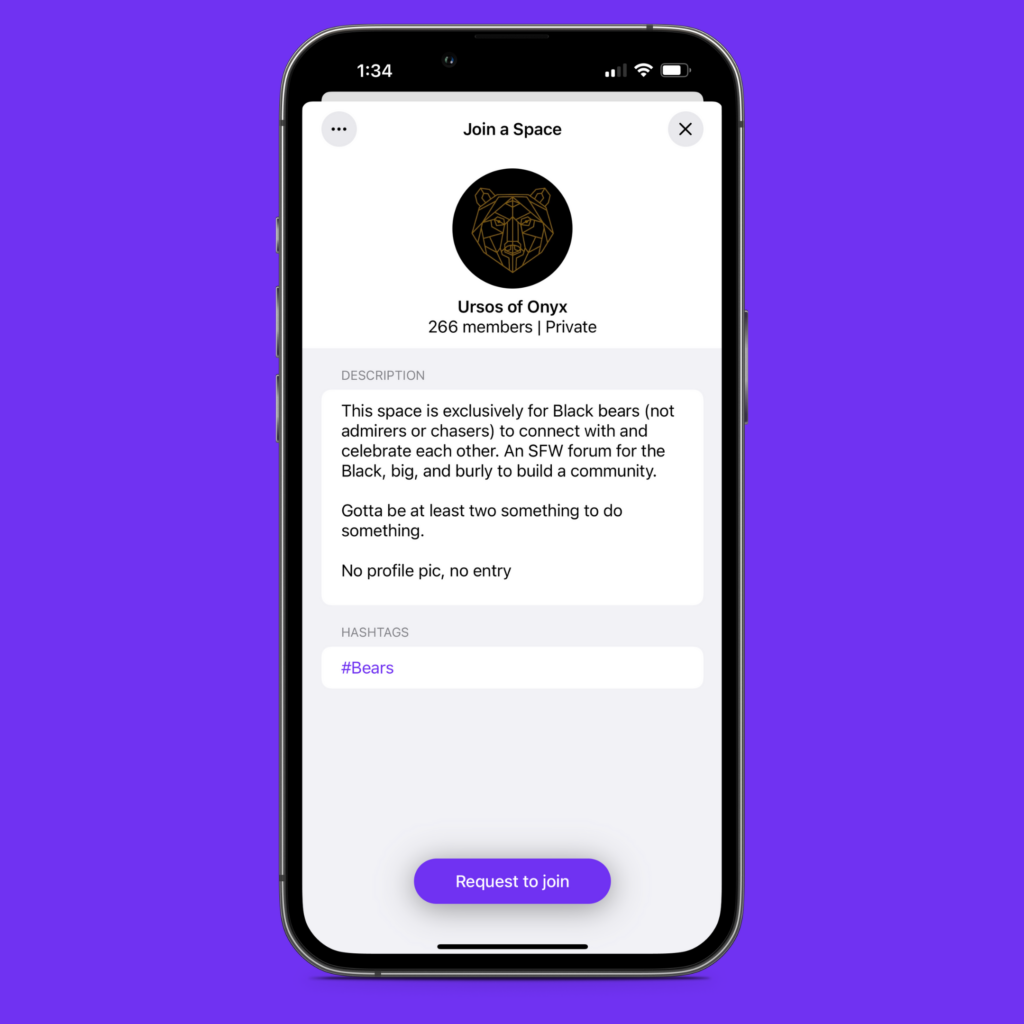 What are some of the spaces you love spending time in?

I absolutely love the “Ursos of Onyx” space for Black bears, started by myself and Dre Smith. We talk about everything there, from the Black diaspora to Pokémon and anime. It’s a lively group that has resulted in genuine friendships — for me personally and for others in the Space as well.

“Bear Your Heart,” a group for bigger men who struggle with depression and/or anxiety, is another I enjoy. I think sometimes going through low mental health moments can feel isolating even though we as queer folks are impacted by them more than our straight and cis peers. There have been incredible moments in the group where somebody will express some of the challenges they’ve faced, and several others will relay going through similar experiences. Not to sound corny, but watching those instances of solidarity, where somebody realizes they aren’t alone, has been great. 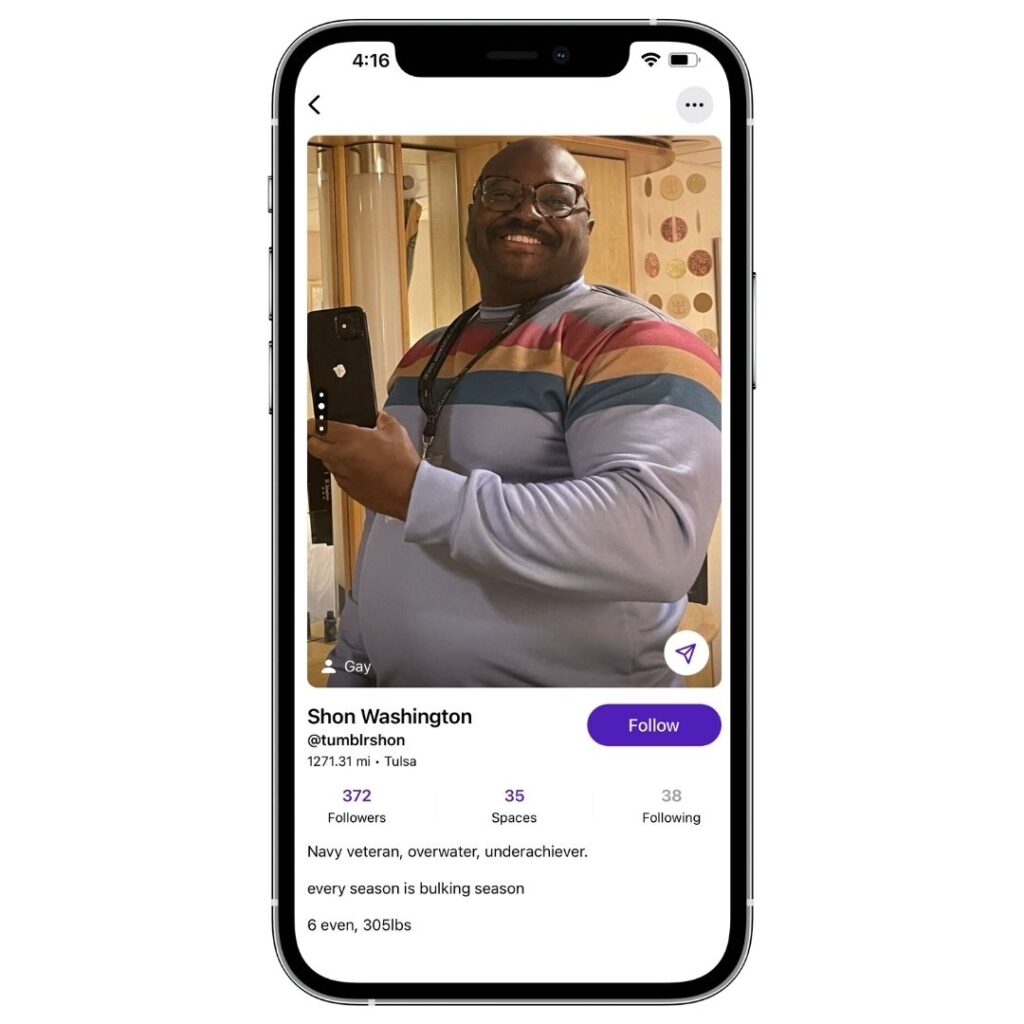 What are a few things you think folks are accessing on virtual spaces that are harder to access IRL?

I think we live in an age where we hunger for community now more than ever. For LGBTQIA folks, virtual spaces allow you to connect with others in an almost curated way you can’t repeat in real life. Our community isn’t a monolith, and I think for the most part people want to connect with others who “get it”; people who have similar interests or share specific lived experiences. I also think that if you don’t live in a blue metropolis, real-life queer communities can be hard to come by or form. Virtual platforms like SPACES eliminate that barrier.

What’s something you’ve learned from the project?

I’ve learned there’s definitely a difference between SPACES and other social platforms in terms of the energy our users bring to the app. People tend to use Twitter as a forum to talk about things they hate or generally to engage with negative content. Meanwhile, Instagram is a place where not everyone has a voice because it’s appearance-driven, and there are certain aesthetics that are elevated more than others. With SPACES, queer people are bonding over things they love, their passions. And because it’s conversation-based, looks are removed from the equation. The power is equally distributed. I honestly didn’t realize how much I needed this kind of app prior to working on the project and becoming a user. This is something we hear from our larger user base as well.

How do you see SPACES growing and changing in the future?

We are exclusively iOS/iPhone at the moment, with a much-anticipated Android version coming out before the year’s end. I’d love to see the platform continue to grow. Thus far our growth has primarily come from word of mouth — from users who love the app, and from the Hosts who have created really fun, engaging Spaces within the app.

We’ve had a horrible experience using other platforms like Facebook and TikTok to get the word out about SPACES, because we’re constantly met with resistance. They either won’t let us run ads that promote a queer app, calling us “adult content” when we’re not, or on a platform like Facebook our ads get inundated with homophobic and transphobic comments, which, when reported, don’t even get removed.

Our experience on these platforms goes straight to the heart of why we need an app like SPACES in the first place. The big social media platforms couldn’t care less about queer people, our safety, or our best interests.

What’s something you’d like to see more of on SPACES?

I’m thrilled to say that we already have every letter of the LGBTQIA+ acronym represented on SPACES, both as users and also via individual Spaces (sometimes several) for each of those various segments of our community. But we’d love to see even more!

While most queer apps are basically dating or hookup apps that tend to focus on one particular demo of the community, our team is focused on ensuring that every segment of the queer community has a home on SPACES. That also means going beyond sexual orientation and gender expression and into often-overlooked segments such as people with disabilities, migrants, and older generations. Ultimately, we want an app that every queer person can open and find a Space where they belong.♦