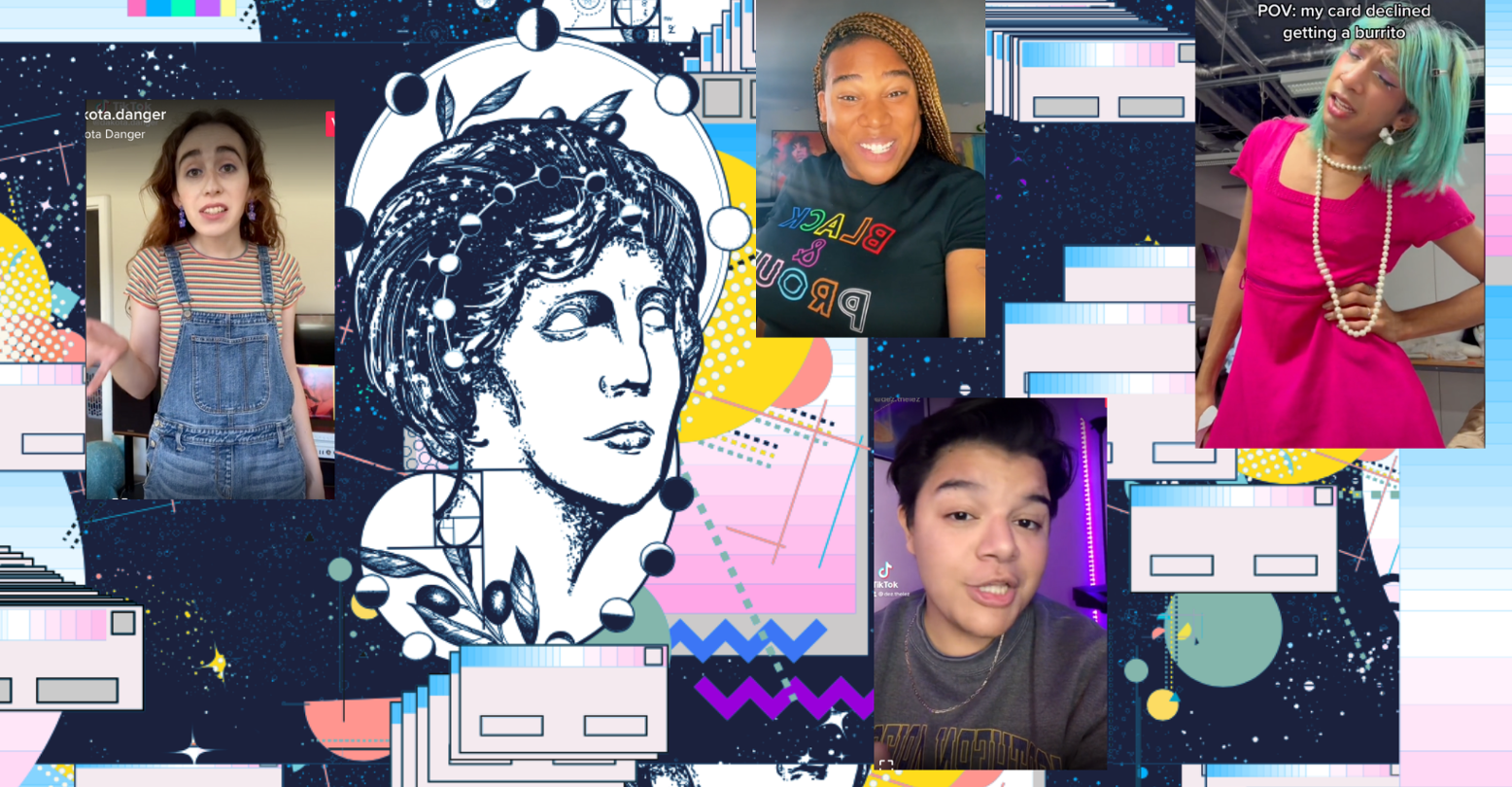 Look, it’s rough out there. We all know it. And it shows no sign of letting up! Thank god there’s TikTok. If you’re like me, you’ve spent countless hours on this app letting your brain drip out of your eyeballs and just, you know, vibing. It’s nice! And let’s be honest, what the hell else is bringing us joy in this almost-2-year-anniversary of the panna cotta? Nothing. So whether you’re in need of a few fresh new follows or just want to laugh your gay ass off, I present you with my favorite queer TikTok creators who are simply the moment and the message.

If you need a laugh:

@chantzinhispants is giving everything from literally chanting in his pants to videos about Grindr culture.

Literally just seeing @eyeout4selen3r‘s name on my phone makes me burst out laughing, so you can only imagine what his actual content is like.

We owe @horacegold so much already simply for creating the #omicronianagranda hashtag. Come for the stories, leave literally heaving with laughter.

@dez.thelez‘s impression of lesbian Zorro will make you pee yourself, guaranteed.

@dakota.danger has some hard facts to drop.

@bbyvenus is every last one of us who’s had our card declined while buying a burrito. We had millions this morning, we swear!

For a reminder to keep going:

@cylovesfrogs has a beautiful vlog full of delicious recipes, gorgeous coffee drinks, and spur-of-the-moment trips to Daiso. But she’s also incredibly honest about her depression and the days where it’s hard to get out of bed in the morning. Watching her videos is like reading a letter from a friend telling you to keep going no matter what.

@cylovesfrogs this is ur sign to get out of bed! (: y’all ask for days in the life…. but like, ya girl is depressed, ya feel? #daywithcy #dayinthelife #daily ♬ Loose Lo-Fi sound + Japanese musical instrument – xxxHaToxxx

@mx.deran is the nonbinary bestie you wish you had. If you need an extra boost (or need to educate some allies in your life), their channel will inform, uplift, and totally change your mood.

@mx.deran This is not a call for guilt. It is a call to action. I hope this resonates.💕 #trans #nonbinary #misgendering ♬ original sound – Ty Deran

@zothemotorscooter knows the difference between haters and supporters, between people who are talking a big game and allies that actually follow through, and her heart-to-heart talks will help you tell the difference, too. Plus, her nails are utterly amazing.

@camaki24 knows the painful truth of “not looking queer/nonbinary enough.” Extremely relatable–and also entertaining as all hell. Anyone who knows the they/them struggle will relate.

@camaki24 Straight Passing Bi: aka how many puns do I have to make before people get the hint #lgbttok #singersongwriter #music #singer #fyp ♬ original sound – 🥺 Cam 🥺

For realness and truth bombs:

@noxteli pulls zero punches. She’s got some shit to say about transphobes, TERFs, and tenderqueers, and you’re going to want to listen up.

Song from The melancholy of Haruhi Suzimya

@sam.yeet is a self-described “professional hater,” and honestly that’s the energy we need more of right now.

For amazing outfits and makeup:

Designer extraordinaire @jeremythetea shows off their incredible Disney LEWKS that put everyone else to shame.

And  @theeglamnaija gets creative with her anime-inspired beats.