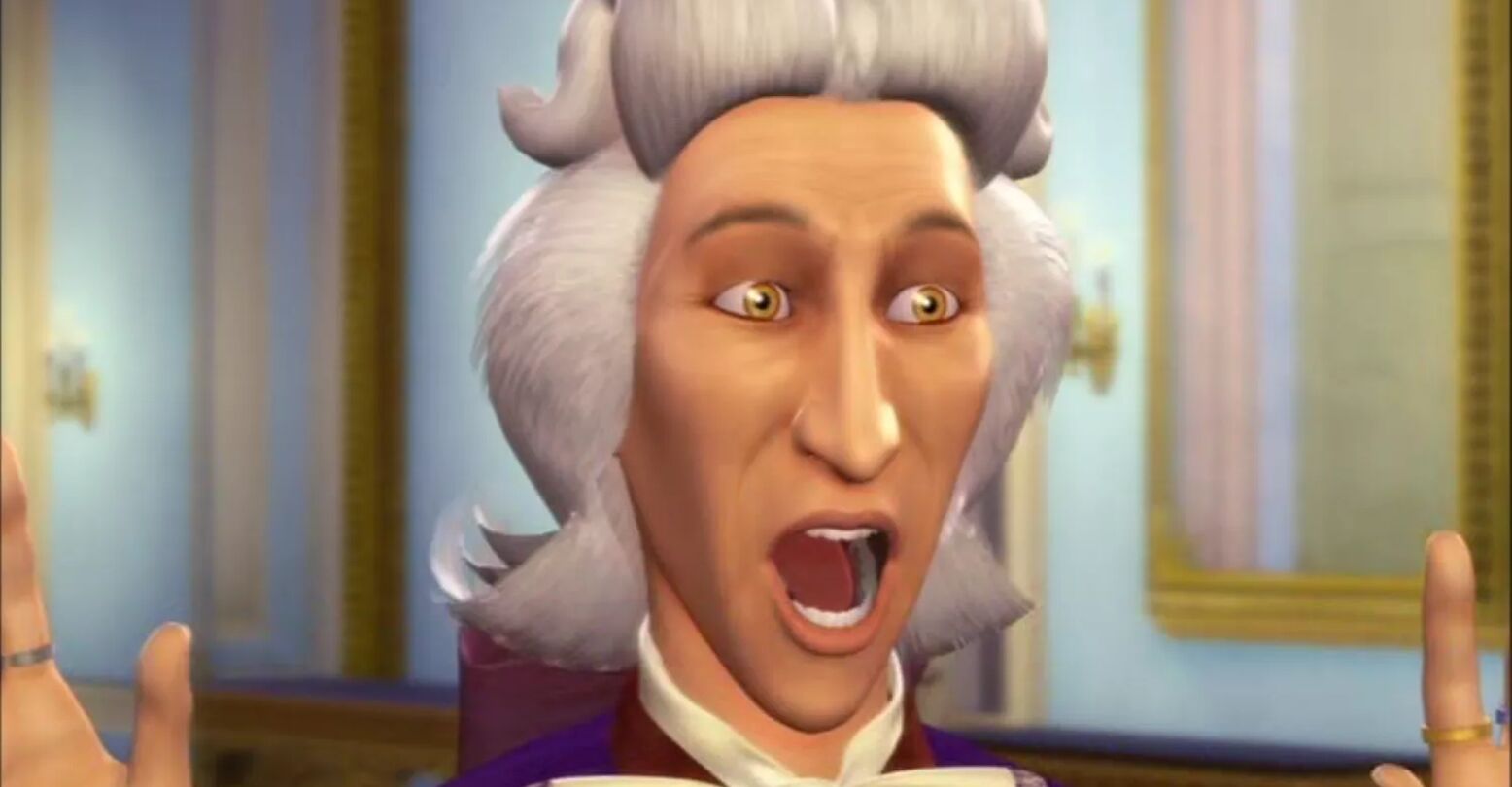 It’s not controversial to say that Barbie as the Princess and the Pauper is better than its predecessors. Its plot is much less formulaic, the animation is sharper (especially the backgrounds), and, most important of all, it has a great villain: Preminger. 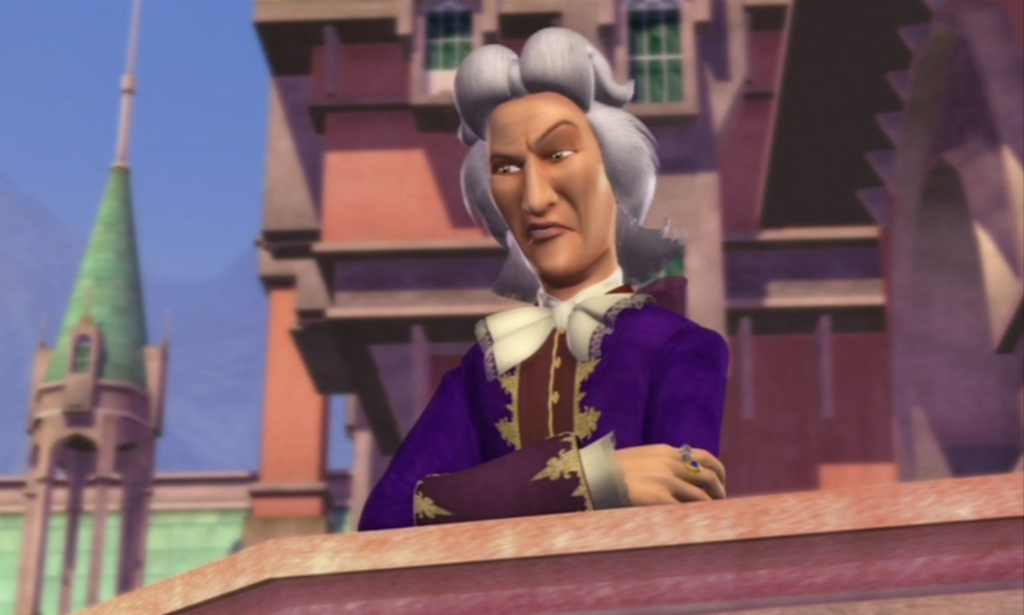 We don’t know if that’s his first or last name. Even during the sham wedding at the film’s climax, the pastor refers to him only as Preminger. This is a kids’ film. He doesn’t need another name.

Look at him. Those sharp purple robes, which make him stand out against the other characters’ relatively muted tones. Look at the rings. Look at that hair, which Karolina Żebrowska, in her video on Barbie movie costumes, refers to as “ambiguous.” Hell, LOOK AT THE SHOES. 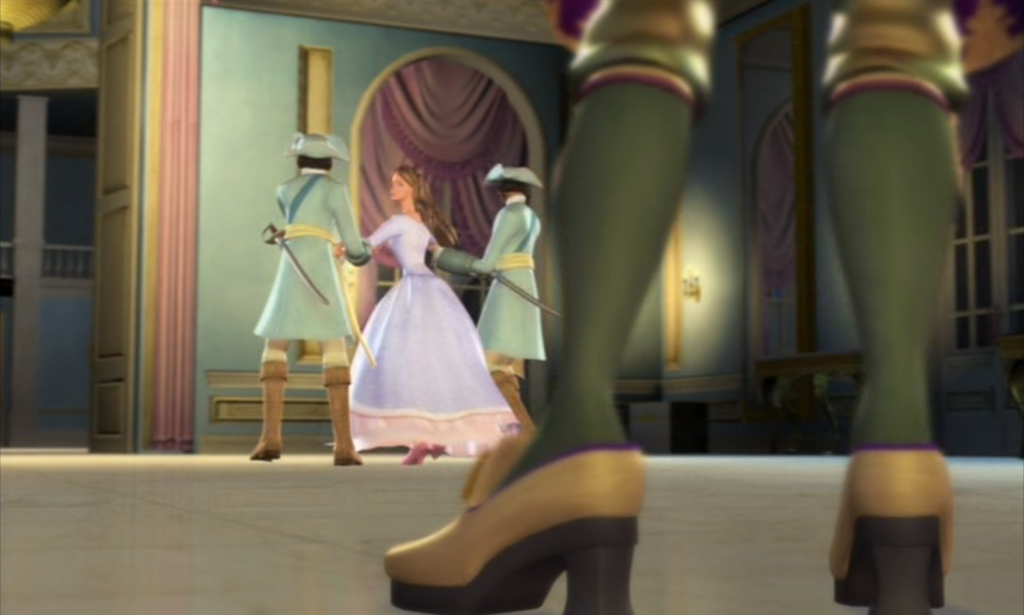 He’s voiced by Martin Short, who is as gay-coded as a straight man can be. Unlike previous Barbie villain celebrity voice actors like Anjelica Huston, who sounds like she’s voicing Barbie as Rapunzel’s Gothel for the paycheck, and Kelsey Grammer, who sounds bored as hell while voicing Barbie of Swan Lake’s Rothbart, he sounds like he’s having the time of his life. His readings are full of delightful, lively malice. Listen to the way he says “Why don’t you stick to your books, schoolboy?” Not to forget all his little expressions, his gasps, his “ah!” his ughs, and all the evil ways he laughs.

The appeal the characters Barbie plays in these films begins with familiarity; everyone knows who Barbie is. She’s there for the young girl target demographic to identify with. Following years of feminist criticism of Barbie (including an incident where a culture jamming group switched Barbie voice boxes with GI Joe ones), Mattel made an effort to present Barbie as a role model, and as such, her characters have talents that end up serving them well. In this film, Barbie plays both the Princess Annaliese, who has an interest in geology, and the pauper Erika, an indentured servant and aspiring singer.

Barbie’s characters in these films become such aspirational figures that even the villains want to become them, if only to further their evil schemes. Barbie as Rapunzel’s Gothel shears off Rapunzel’s hair and uses it to disguise herself as her to attend Prince Stefan’s ball. In Swan Lake, Rothbart uses magic to have Prince Daniel perceive his daughter Odile as Barbie’s Odette.

Preminger does no such thing. If he is to take over the kingdom, he will do it as Preminger, and nobody else. He is disgusted with the very idea of Barbie. He makes this face as Erika sings: 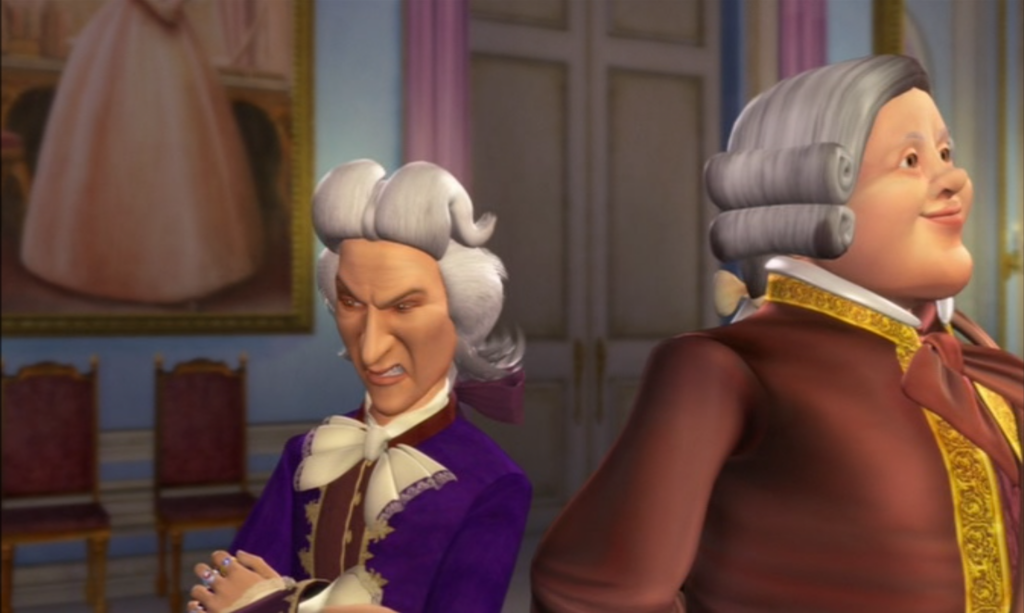 Another thing about Barbie films is that there are an unbelievable amount of sidekicks, often but not always animals. Rapunzel even had two: Penelope, a dragon voiced by the legendary Cree Summer, and Hobie, who might be the only ugly cartoon rabbit. Because Barbie plays two characters, she also two in this film: Serafina, Annaliese’s fancy white cat, and Wolfie, Erika’s transmasc-coded cat-who-behaves-like-a-dog. Preminger has his own gay-coded sidekick, a black poodle Midas, who has a gold tooth, a beauty mark, and a ridiculous New York accent. 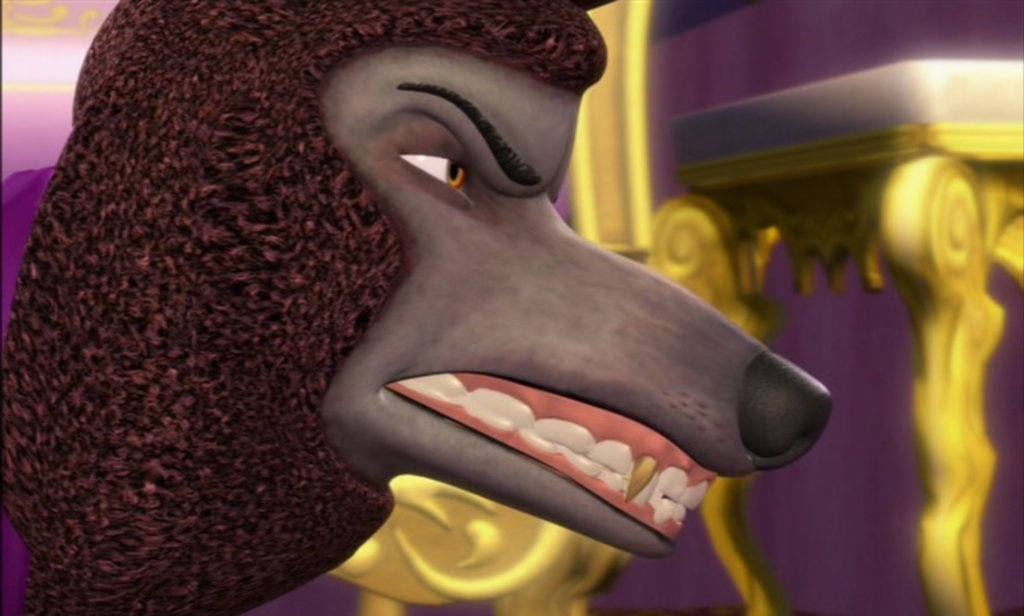 Preminger is introduced as being the Queen’s trusted advisor, a position he’s somehow obtained despite being the most obviously evil man in CG medieval history. The kingdom he serves is in a crisis: the mines have run out of gold. Preminger knows how to solve it, because he’s the one who’s been stealing it all. His solution: he will ride in on the enormous wealth he has embezzled, marry Annaliese, and become heir to the throne.

Barbie’s characters in these films become such aspirational figures that even the villains want to become them, if only to further their evil schemes.

Just one problem: the Queen has decided that Annaliese will marry Dominick, the monarch of the neighboring kingdom. No problem for Preminger though, as he quickly decides to send his himbo henchmen, Nick and Nack, to kidnap Annaliese and hold her until Dominick calls off the wedding, at which point Preminger will “rescue” her, and by doing so, impress the Queen so much that she’ll marry Annaliese off to him.

This is an incredibly ridiculous plan, but Preminger presents it with style, during the villain song How Can I Refuse, which is also the best song in the film.

The plan is thwarted when Julian, Annaliese’s tutor, substitutes the pauper Erika in her place. Annaliese easily escapes, with the aid of Serafina.

Fortune turns in Preminger’s favor when Serafina comes bearing a ring with a tag from the dress shop where Erika works, where Annaliese, who has been mistaken for Erika, has been forced to work. He kidnaps Annaliese again, traps her in the mine, points out Erika as an impostor, sends her to the dungeon, and with both of them out of the way, reprises “How Can I Refuse,” with a very high step followed by a heel click, to force the Queen into accepting a marriage with him.

Eventually, Wolfie digs a hole for Annaliese and Julian to escape from, Dominick busts Erika out of the dungeon, the wedding—which Preminger has prepared for mostly by admiring his own reflection—is disrupted, and Preminger gets thrown from a horse into his own wedding cake. All the couples get married, even the cats (Barbie’s narration emphasizes their “many, many, many kittens”). Hell, even the horse that throws him into the cake gets married. Annaliese rebuilds the kingdom’s economy by selling the geodes she discovered in the mine, and all the good, heterosexual people live happily ever after. The end!

Though he ultimately fails to become king, there is one realm where Preminger reigns supreme: the Internet. As Gen Z continues to scrutinize its childhood media, the Barbie films have inevitably come up, and Preminger is one of the most popular topics of discussion. TikToks tagged “Preminger” have 32.6 million views as of writing. My personal favorite comes from a user named ratapologist, captioned “When you find out Chick-fil-A is hiring, but you’re gay,” set to a snippet of How Can I Refuse, featuring its TikToker removing her makeup and putting on a dress shirt and cross necklace.

In some places he’s been cast into the role of hero. A powerpoint titled “Why Preminger Was The Goody All Along” by the Tumblr user bimbogollum praises him for being “a gay man from a working-class background who makes the brave decision to overthrow the current royal family in the hopes of creating a better life for not only himself, but for all the people of the Unnamed Kingdom.” One of the most popular reviews of the film on Letterboxd, by the user maggie, states “preminger and his gay-coded poodle threw the first bricks at stonewall.”

Preminger is admittedly not the only gay-coded Barbie movie villain to be memed, but he is definitely the most actively celebrated one. God bless this purple, vain, scheming, effeminate man. Praise that the reign of Preminger is here!♦