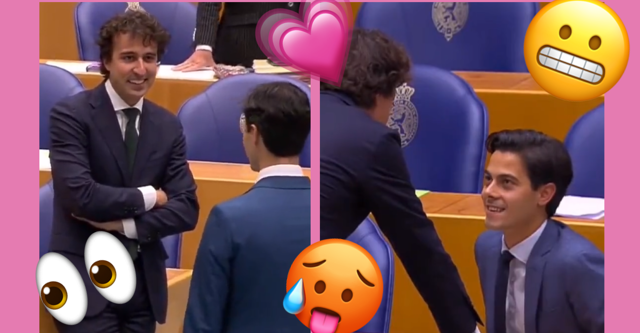 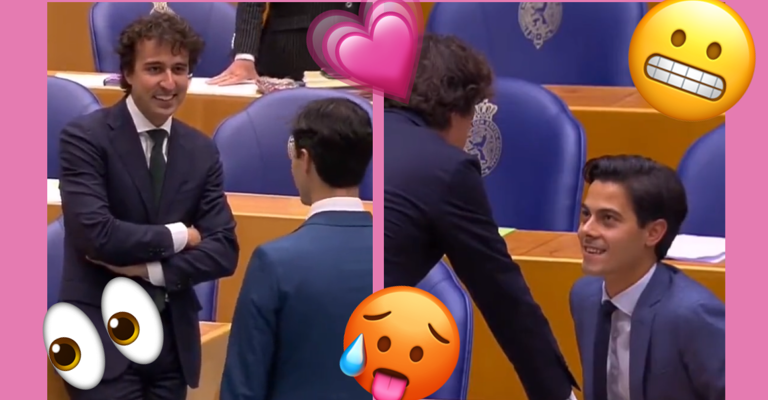 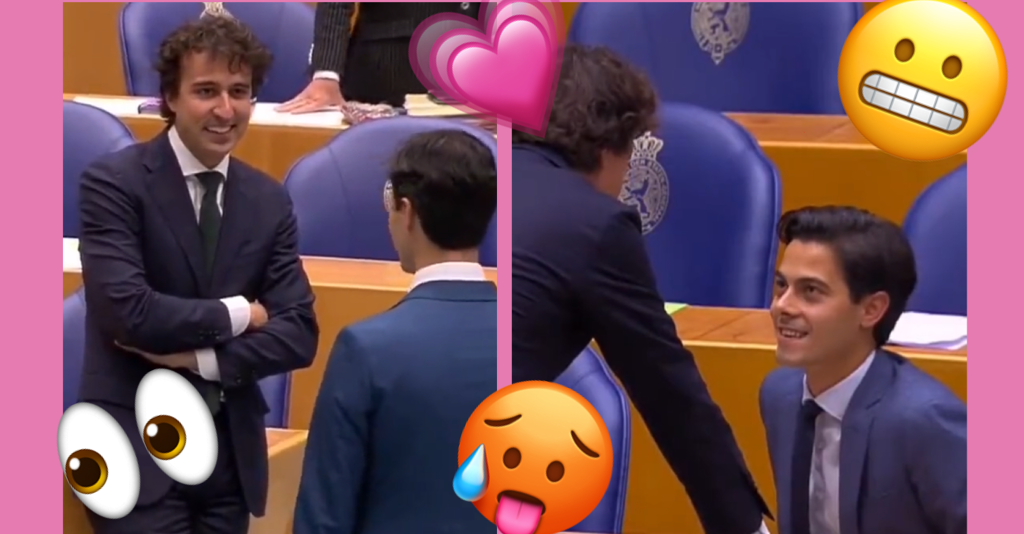 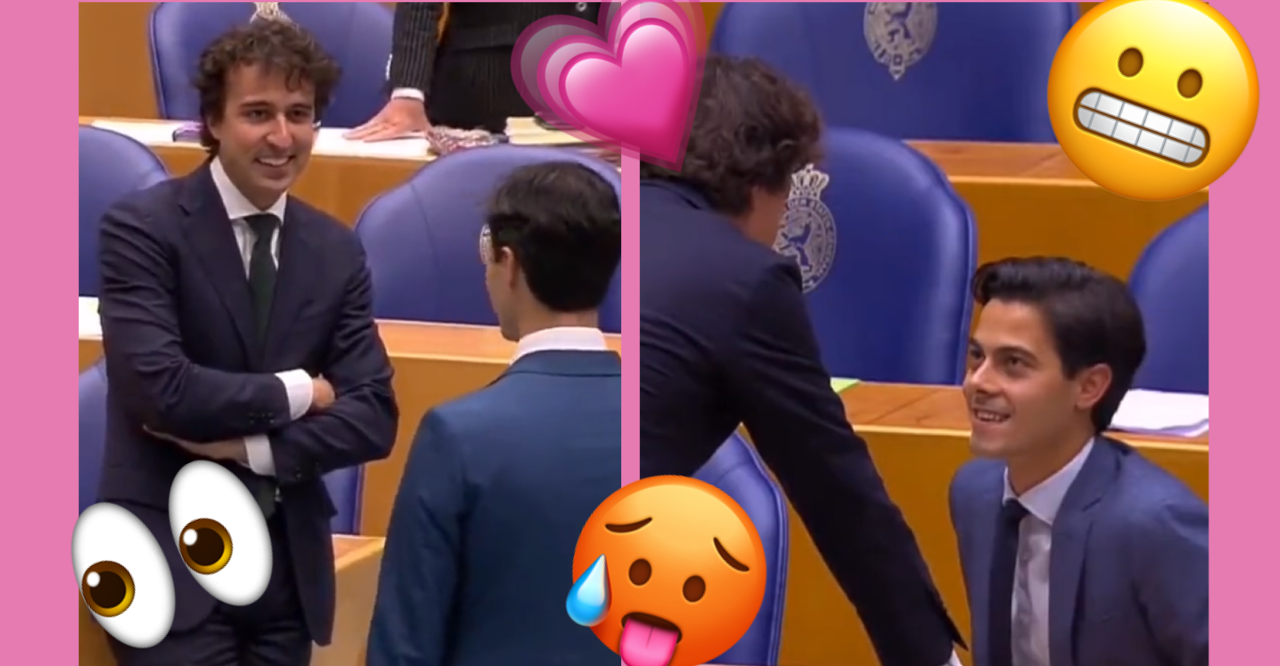 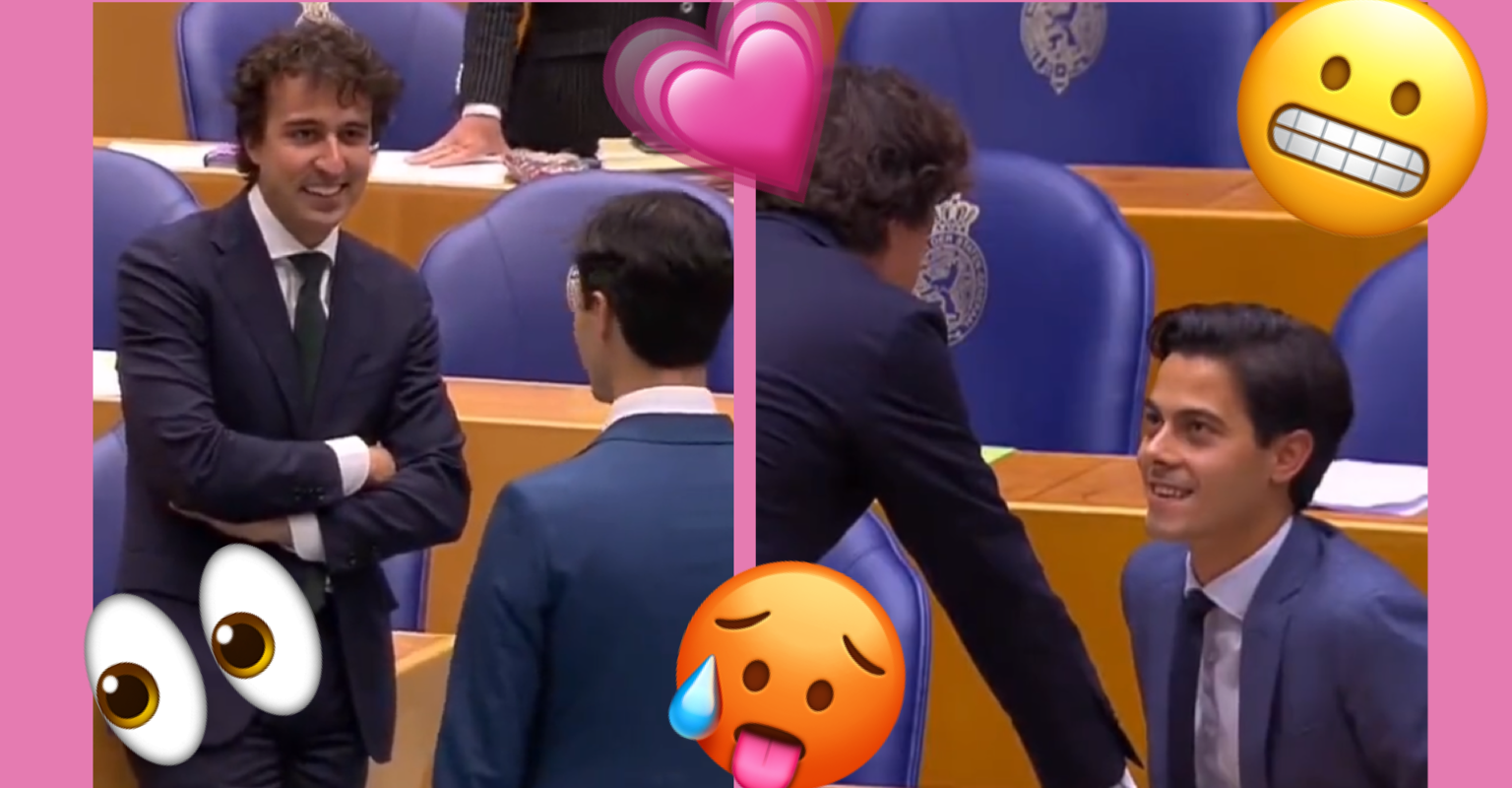 In recent weeks, you may have seen a video going around social media purporting to show — through parliamentary broadcast camera footage and TV appearances — the progression of two legislative colleagues building up a rapport, which then developed into a close relationship.

While a viewer might be easily fooled, the relationship between the two men is not romantic or sexual, according to them — but they are “besties.” Despite that pesky little fact, it hasn’t stopped the internet from hyperfocusing on the two’s every interaction and shipping (pretending the two are dating, if you’re unaware) the pair for months.

The two men are Rob Jetten and Jesse Klaver, two members of different parties in the House of Representatives of the Netherlands. Fans have dubbed the “pair” with the portmanteau “Resse.”

While the phenomenon has gained traction online recently, it’s actually been brewing in the depths of gay TikTok and Tumblr for months. Jetten and Klaver became aware of it at least as late as April, when he shared some of the footage on his Instagram with the hashtag #Resse.

Not only are they the subject of adoration from a dedicated TikTok page and several fans across multiple platforms, but they have fanfictions written about them.

Locally, Jetten is the Party Leader for the Democrats 66 (D66), a liberal party caucusing with the majority governance. Klaver is the Leader of GroenLinks, the Dutch equivalent of the Green Party, which is among the several other parties in the opposition. Jetten has been in office since 2017, but only became D66’s leader this year, Klaver became leader when he first won his seat to parliament in 2015.

Jetten’s 34, Klaver’s 35; both are in relationships, but not with each other. Jetten is gay and has a boyfriend, while Klaver is married to a woman and has parented three children with so far. Klaver rose to prominence with years of youth organizing, while Jetten began consulting and advising before taking office in local political seats, then going nationally.

Insider dug in to the true nature of their relationship, and the fairy tale made up by everyone else, last month. Arguably the most viewed video from the fiasco is one by TikTok user @ressepeasants, the account which has been dedicated to tracking the pair’s interaction for more than five months.

“6 months ago this happened,” one video begins, as a compilation of footage showing Jetten and Klaver talking on the parliament floor, at events and during online conferences — many of which were shared on the page or elsewhere separately — is accompanied by music from “The Greatest Showman.” The 40-second video has north of 3 million views on TikTok alone, which doesn’t even count the endless reshares across other platforms that have also taken off for hundreds of thousands of interactions.

The woman behind the @ressepeasants account, Eve, explained how it came together more than six months ago.

“Even though Rob and Jesse are not from the same party, there’s still this really good friendship going on. By documenting their friendship, I thought it would be good way for other people that are not from the Netherlands to learn a bit more about politics,” Eve told Insider.

With the government only holding a majority in the House with 77 members compared to 73 in the opposition, there’s actually political incentive for Jetten and Klaver to get along and work together. Now, there’s sociocultural incentive, too.

Jetten made clear early on that there’s nothing but a friendship between the two.

“Sorry to disappoint all my new fans, but Jesse and I are just really good colleagues,” he said in an Instagram story — adding a winking emoji — before saying that they “enjoy” the attention and this has been a “whole new experience.”

Still, “I will be sitting on the sofa with my boyfriend and Jesse will be doing the same with his wife and kids,” Jetten said, “We both wouldn’t have it any other way.”

Of course, they’ve since taken the opportunity to give the people the photo op or social media post that they want. Still, though, the legend of something more lives on. Wattpad currently has more than 70 stories in the “Resse” category, garnering north of 120,000 viewers, in what Insider describes as a renaissance of “Larry Stylinson,” the fanfic craze centering around the fictionalized shipping of One Direction’s Harry Styles and Louis Tomlinson that peaked in the early 2010s.

Psychologically, the shipping of two public figures — politicians this time, instead of celebrities — is an example of a “parasocial relationship,” psychotherapist Madalaine Weiss says, but it can be “an opportunity” for people because “The stakes are low, as people are less likely to get rejected than if they reached out to a real person in the real world.”

Avigail Lev, a psychologist, also said that the “affectionate and respectful bromance” is a sign of the times. “During this time, with the ‘me too’ movement, Trumpism, and gender tensions, people feel touched when men in a position of power behave affectionately towards each other,” she told Insider.

That might also explain why it has resonated so much with Americans. Besides the bitterness and toxicity filling politics in the United States, it’s simply hard to envision two politicians of the same sex — even those with only a few degrees of separation in ideology — appear to be romantic, even optically.

It’s probably because our politicians, like much of the country, still largely have issues around gender norms (looking at you, Josh Hawley, et al) and social relationships (looking at you, Al Franken, et al) — but also, most politicians are still largely older white men. It’s hard to project a sweet, romanticized version of people who are keeping our country lagging and divided (although, some people certainly still try.)

It also can’t help when most media representation of political officials already tend to show them engaging in secret affairs and embroiled in scandal. Not that it isn’t accurate, but shipping politicians may be easier to stomach for those who don’t already expect leaders in government to get caught doing something illegal or fascist.

In this case, the ship’s subjects are white, younger, and their politics are not widely known beyond their constituents, let alone beyond Dutch borders. They’re maintaining a substantial political relationship despite somewhat differing backgrounds and allegiances. Also, they really do look happy when talking to one another. In conclusion, I don’t think it would go over as well if it were, say, Chuck Schumer and Joe Manchin doing something similar.

This is part of why “Resse” is resonating with other queer people, too. We’re so used to a lack of media representation and diversity in leadership that two people, one gay and one presumably not, having a healthy relationship already sounds like a made-up fantasy that many had to grow up romanticizing. We’ve already constantly had to imagine queer representation in our favorite TV characters or series of novels.

But, especially for queer people and Americans, political figures have long fell out of those fairy tale scenarios. It’s already hard enough these days for anyone trying to idolize celebrities, but now politicians are on the table, too?

I’m so invested in the relationship between these Dutch politicians pic.twitter.com/F6yAmcfOpb

The ship is not without controversy or detractors — least of all people in the Netherlands who are not without issues in the hands of politicians like Jetten and Klaver, who are not finding the popularity of “Resse” as amusing. Just check Reddit sometime.

But “Resse” is certainly not focused on the two’s political identities, or even much of their actual lives; it’s in fact a euphoric getaway from all of that. In this sense, the men are just vehicles for characters we’ve all dreamt of in some fashion or another, like actors or musicians usually viewed in this way. The ship is a Mokum — Dutch slang for safe space, and the city nickname of Amsterdam — of sorts.

“Resse” has lived on, largely due to the willing participation (and de facto blank permission slip) of the subjects in the ship’s popularity. @Ressepeasants creator Eve told Insider, “As long as the Resse edits are done respectfully and not too extreme, I think we can all still enjoy their lovely friendship. Resse is just an amazing thing that happened in people’s lives, and shouldn’t disappear because we took it too far!”

How far is “too far,” for the participating fans or the subjects themselves, remains to be seen.

For now, most social media users are respectfully cheering on the faux couple as a model bromance-turned-romance, choosing to suspend reality and believe in true love. It’s hard to blame them for that.

The question that remains, however, is whether this fairy tale will be a unique, momentary fad — or, like many things in politics and pop culture right now, a bad omen forecasting for more — and much worse — retellings in the future.

Also, I'm well aware that they both have partners but you know what? I've decided that I will not be processing that information and will keep living in this fantasy.