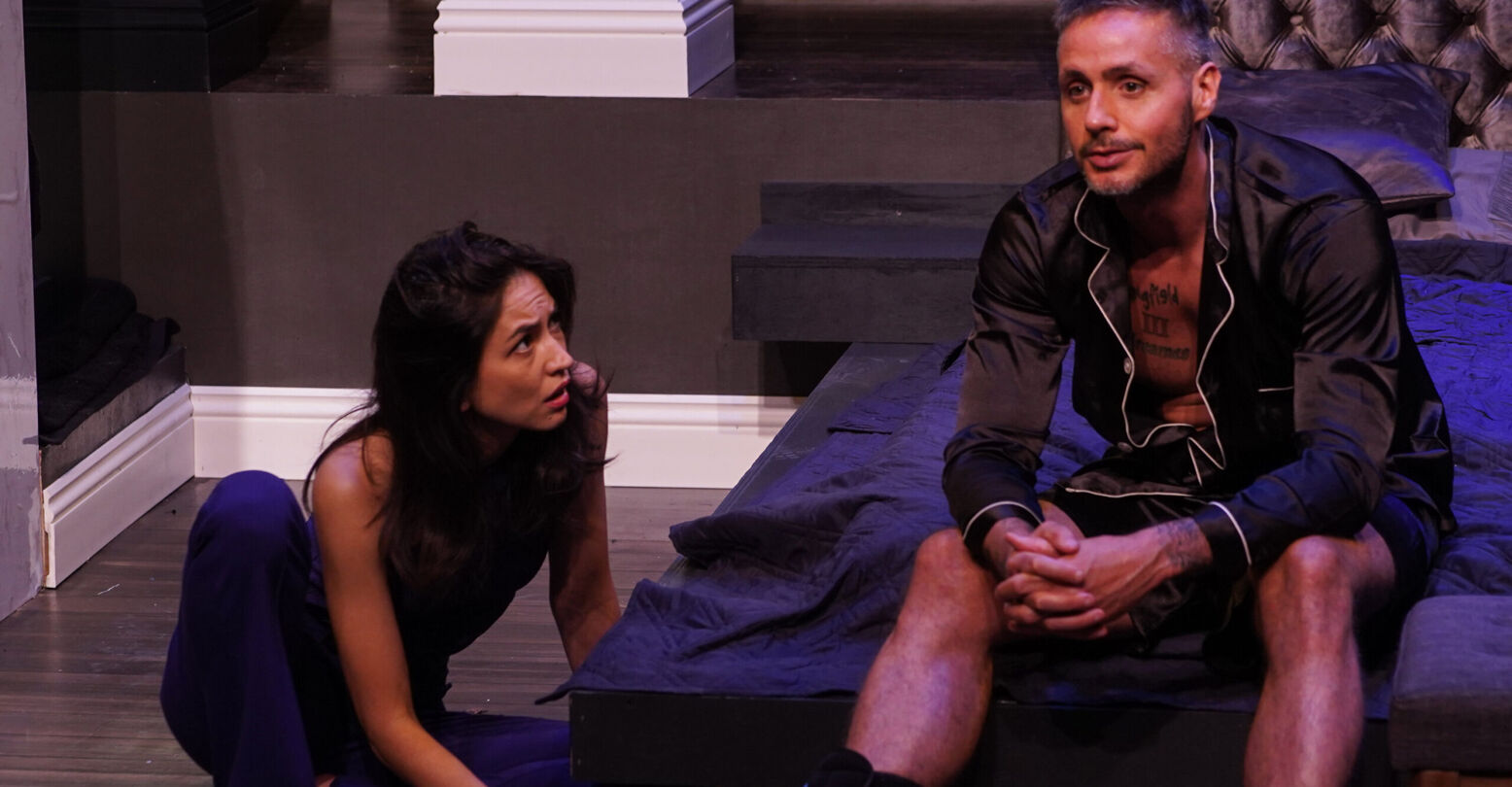 In a recent revival of Tennessee Williams’ Cat On A Hot Tin Roof, Brick chucks stones from the closet of his glass house.

Brick (Matt de Rogatis) is a closeted man unhappily married to Maggie (Sonoya Mizuno) in the recent Joe Rosario-directed production at Theatre at St. Clements. Both face pressure from Big Mama (Allison Fraser) and Big Daddy (Christian Jules Le Blanc) to start a family of their own. Brick and Maggie each have something to gain from dutifully building a nuclear family: Brick can lay to rest rumors of his queerness, and Maggie can achieve financial stability by firmly rooting herself in the family tree.

Matthew Imhoff’s scenic design is the antithesis of domesticity. Instead, it easily reads as the pre-furnished apartment of a 20-something yuppie bachelor pad, equally anonymous and expensive. Think of the aesthetic behind the words “modern industrial” and you will have accurately pictured the furniture strewn on stage. The grey slab where their mattress rests is as imposing as it is unwelcoming, which makes Maggie’s pleas for pregnancy seem all the more futile.

Maggie is more eager, and insistent, to start a family than Brick is. Mizuno thrashes, writhes and wails with hyperbolic desperation as she grips onto the silk sheets of her grey-slabbed bed. Mizuno’s performance is convincing enough that it bankrupts both Brick and the audience of any sympathy for Maggie’s predicament.

Brick is cornered into marriage through homophobia just as Maggie is cornered into the same bargain for economic survival in a patriarchal system. But Maggie is unfairly portrayed as a baby-obsessed nuisance – a reminder of the price Brick must pay as a closeted gay man. Maggie’s treatment as a character is as if she is the reason they are snared in this heteronormative trap. As if she created the systems that threaten both her and Brick. Even if she didn’t create them, to Brick, she represents them.

Frustratingly, Williams’ play ignores the fact that wives have an equal if not more powerful position in a relationship: they have the ability to protect their husbands by shrouding them in heteronormative aesthetics. But the wives of closeted men are also able to engage in a queer Lysistrata – not deriving their power from withholding sex from their husbands, but by withholding the information that they are not having sex with their husbands. The real stakes of this dynamic go unacknowledged in the play.

Both sides have something to lose, and Maggie could be just as angry at Brick for failing to meet the masculine standards tied to starting a family, but she preserves his dignity. Neither are at fault for the predicament they find themselves in, however, Maggie faces the brunt of Brick’s emotional abuse, and the failure to start a family is seen as solely the woman’s fault pointedly demonstrated by Big Daddy questioning whether Maggie satisfies Brick in bed.

It’s far from the only queer work that grapples with paying the wives of closeted men their due.

In Brokeback Mountain, when Alma learns that her husband Ennis is gay, she restructures her nuclear family by finding a new husband. Her decision acknowledges the same economic constraints that Maggie faces, which requires finding a new primary breadwinner when she isn’t given the opportunity to be one.

One modern sitcom goes a step further by completely throwing out the nuclear family as the rubric by which an ex-wife evaluates her next steps. Two wives are the literal punchline as their now ex-husbands marry each other after a decades long affair in Grace and Frankie. But this comedy series delivers the joke while also delving into the emotional terrain that comes with having a partner come out. Frankie admits that she is angry at being deceived, sad to be losing her best friend as a romantic partner but also happy that her ex-husband gets to live the rest of his life as a gay man. Grace and Frankie each figure out what womanhood means to them now that they aren’t wives. To them, it means sexual liberation and launching a startup that sells vibrators for older women.

Some of that agency is on display by the end of Tin Roof, after Maggie decides she is done pleading. At Big Daddy’s birthday party, she lies to the family, announcing that she is pregnant. She’s drawn the line: Brick now has a deadline to determine whether or not he will participate in this heteronormative farce. But that conversation is set to happen behind closed doors, as the play ends without maturing its stunted central relationship.

Without a discussion on whether pregnancy is pursued as a joint effort at survival for both Brick and Maggie, her lie feels manipulative, desperate, and cruel. By setting the announcement up as a trap, Tin Roof ignores that both have an interest in a sham marriage and family.

It’s a sham that audiences can’t endorse, but let’s not pretend like Maggie is the only one with something to lose.♦

Alexi Chacon is a culture critic and Managing Editor at Token Theatre Friends. He is primarily interested in intersecting his community organizing experience and social policy research with his criticism. You can find him on Twitter at @alexic213.