This past weekend, on a whim, I decided to head to the desert to enjoy some Labor Day fun. And with keeping with my Palm Springs tradition, I decided to include a drag show during my weekend because I needed an excuse to check out from reality and work out my stomach muscles a bit.

When I stumbled upon a new Sunday drag brunch at the Hard Rock Hotel Palm Springs and saw that it was a set price, including bottomless mimosas, there was no turning back. I booked the VIP seats (for an extra $10) for DRG BRNCH (Divas of Rock & Glam) and guaranteed my front row seating, to ensure I would have prime time viewing, and couldn’t wait for the highlight of my spur of the moment trip. With a name like Hard Rock backing up these queens, I knew I was in for a great production.

After digging around a bit, I got in contact with Arial Trampway, the leading queen behind the show (also the one whose face I would later see splashed across a massive billboard on the drive into the city). Arial Trampway, a.k.a. AlfiePettit, took the time for a quick interview between last Sunday’s shows.

The interview started backstage as I jumped into a service elevator with a half naked Alan and his hair and makeup artist. We made our way through a kitchen where he waved to hotel staff as he continued to disrobe. The entire experience was a bit surreal and reminiscent of some pop diva leaving the stage after a big show.

As I stood there, drooling to snap photos of him mid-drag, he didn’t even let me ask as he proclaimed, “take all the pics you want, this is me.” 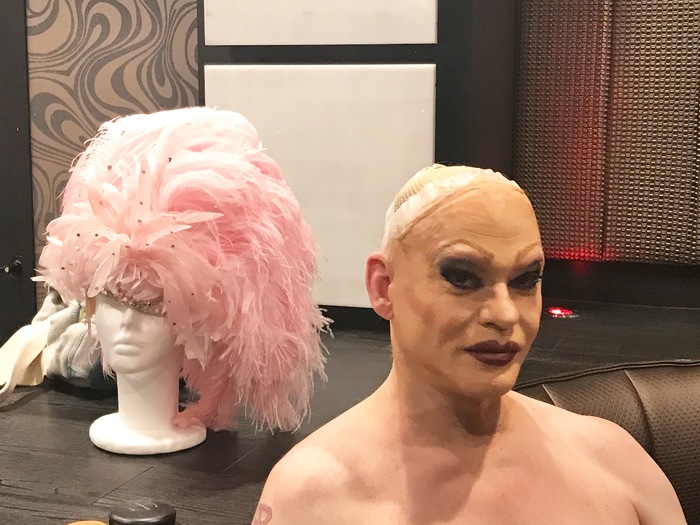 1. So what’s your background with Palm Springs?

I first visited Palm Springs in 2002 and fell in love with the place. I knew on the spot I would end up here. In 2006, I first bought here and lived part time, sharing my time with Thailand where I lived at the time.Finally, in 2010, I was ready for the big, permanent move.

Prior to this show, I was with Carnival Cabaret for a year and a half, working alongside the incomparable Gypsy.I was one of three owners.We used my pink chrome Cadillac to promote the business and increase visibility, as well as riding up and down the local Street Fare on my Segway. And just like now I was the opening and closing act for that show. All this, as well as numerous charity functions and philanthropy, earned me a star on the Palm Springs Walk of Fame in September 2016.

2. How did you partner with Hard Rock Hotel and how does it feel to have such a big name brand as a venue?

It’s amazing to be able to partner with them! I think Carnival Cabaret was the launch pad to working with Hard Rock Hotel.They saw what the Arial Trampway brand was able to do for Carnival Cabaret, and wanted to work with my presence in the city to help build a stronger foothold in the Palm Springs community. It’s a perfect Palm Springs marriage.

Not to mention Hard Rock Hotel is one of the most well-known brands when it comes to music and performers, so matching that up with drag queens was only natural.And before I ever came to Palm Springs I owned Alfie’s Of Hollywood, obtaining signed celebrity head shots and memorabilia, which one walk through the Hard Rock Lobby will let you know we have in common. 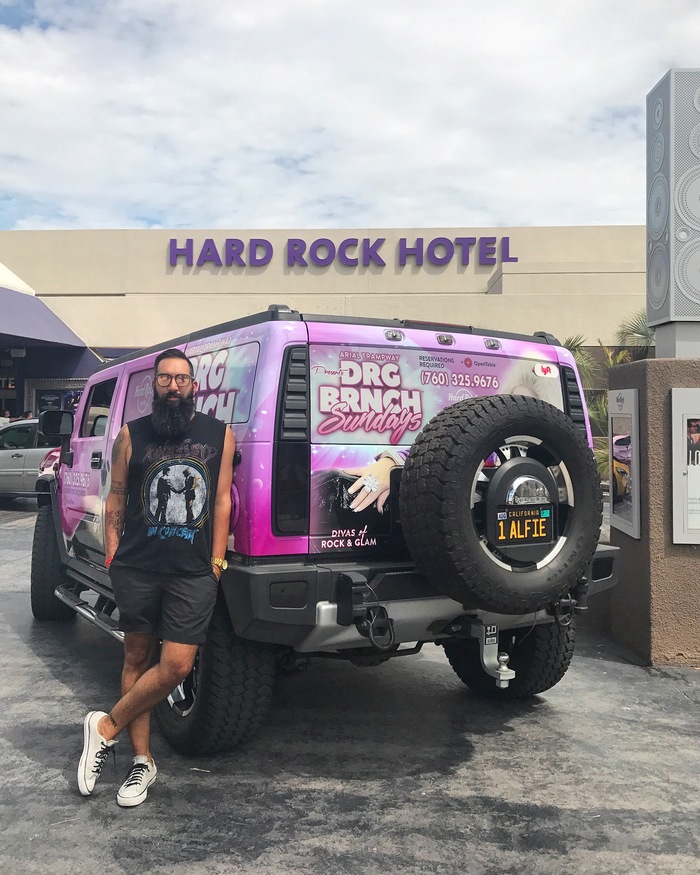 3. How did this show come to fruition?

The General Manager of Hard Rock Hotel Palm Springs, Juan Rivera, approached me about setting up a meeting with Dale Hipsh (now SVP of hotels), to discuss a possible show at the Hard Rock Hotel Palm Springs. After a few meetings, including Kristian Zambrana head of F at the time, and Vince Koehle Director, Corporate Marketing & PR – Hotels & Casinos at Hard Rock International, it was decided theywanted me to produce and star in a weekly drag show. ANDthey wanted it donein 2 weeks! But thankfully with an amazing team surrounding me, we pulled it off.Many thanks go to my executive producer who really made things happen in the beginning, David Reese. If you can get an executive producer with a shelf full of Emmys, you’re starting off on a good foot! 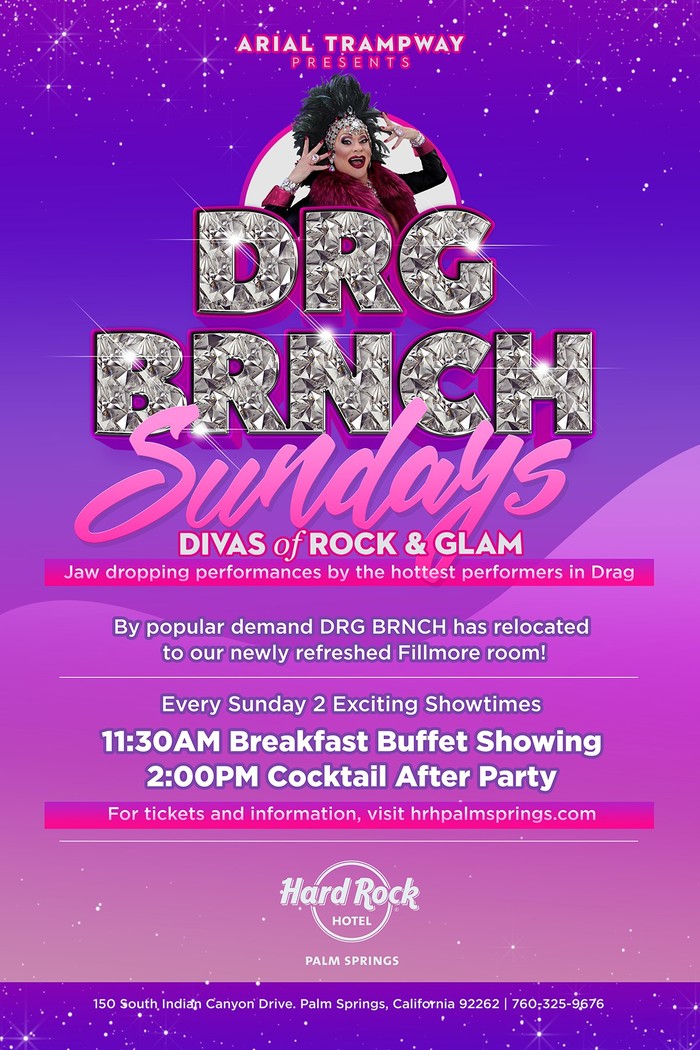 4. Tell me the concept behind the show or what someone coming for the first time can typically expect?

The concept is Divas of Rock and Glam, which is actually what DRG stands for, though it works perfectly as a shortening of DRAG as well.Vince Koehle came to me with the concept shortly after signing the contract.And I was thrilled when it was also put on the back of my very own Arial Trampway Hard Rock hologram labeled T-Shirt.

Our show is all about high energy, in your face, fast paced performances and glam to the max with over the top costuming and glitz. I open the show with my giant feathered fans (in signature pink of course), flying around the room and setting the tone, and then we are off and running from there. The entire show is highly produced, so there is no downtime, not a slow moment.It’s a fast paced thrill ride from beginning to end. 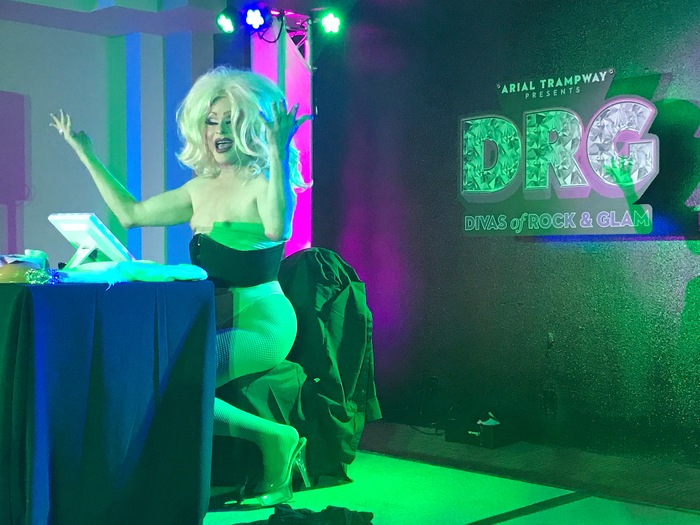 5) How is this show different from the other drag shows in Palm Springs?

Like I said, it is completely professionally produced beginning to end.My executive producer David Reese set it up that way, and it has since been passed on into the capable hands of my producer Ezra Zane and talent coordinator Michael Ralke. We leave nothing to chance. And what other show can boast a giant billboard of my face on the 111 highway, greeting you as you drive into Palm Springs, and a big pink hummer (also with my face!) driving around Palm Springs available for LYFT?

We also have an amazing charity portion midway through the show, #PassThePurse #DRGChallenge, where we do a very special number with guests randomly picked from the audience.We do them up in drag and parade around with our purses open collecting tips for a very special local charity for the entire month.Then, the last Sunday of the month we do a giant check presentation to said charity. We consider ourselves the “Show with a Soul.” To date, we have raised over $7,000.00 for various charities including ACS, HRC, Parkinson’s, DAP, United Way, and manyothers.

6. How do you pick the talent for each week?

I do a lot of in person scouting around Southern California shows, always looking for those amazing performers that may not have the big name cache’ yet, but have all the talent to light up a stage and thrill an audience. Word of mouth is invaluable in the drag community, so I have a lot of referrals from friends and talent we hire as well.

Internet trollingand of course the phenomenon that is Ru Paul’s Drag Race is undeniable. We love the frequency with which we get to have those performers with us like Pandora Boxxx and season two winner Tyra Sanchez, as well as widely known favorites of the scene such as Wendy Ho and Raquell Lord.

7. The show just moved to a bigger space. How did the success of the show make you feel?

The show was always set up as a very high concept, big room experience. We wanted it to have the feel of a fully produced Vegas show.So even though such a big move (and starting a two show back-to-back format at the same time!) can be a little daunting, ideally it’s the space and platform that Arial Trampway Presents DRG BRNCH Sundays at Hard Rock Hotel Palm Springs was always intended for. 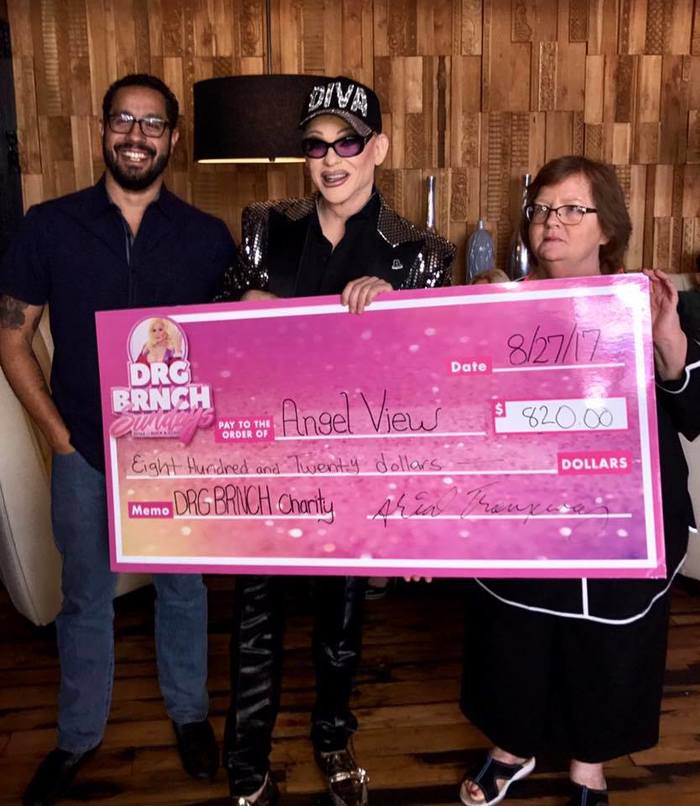 8. Now that the new space has had its first run, how do you feel it went?

Incredible! There are always going to be some nitpicking kinks here and there you want to smooth out, but the overall flow, energy, and excitement of the show in that space was spectacular.I was over the moon.

It felt like graduation, with all the proper pomp and circumstance to go along with it. And to be honest, it just got my creative juices flowing even more for bigger and better things that are now available to us. More, more, more show!