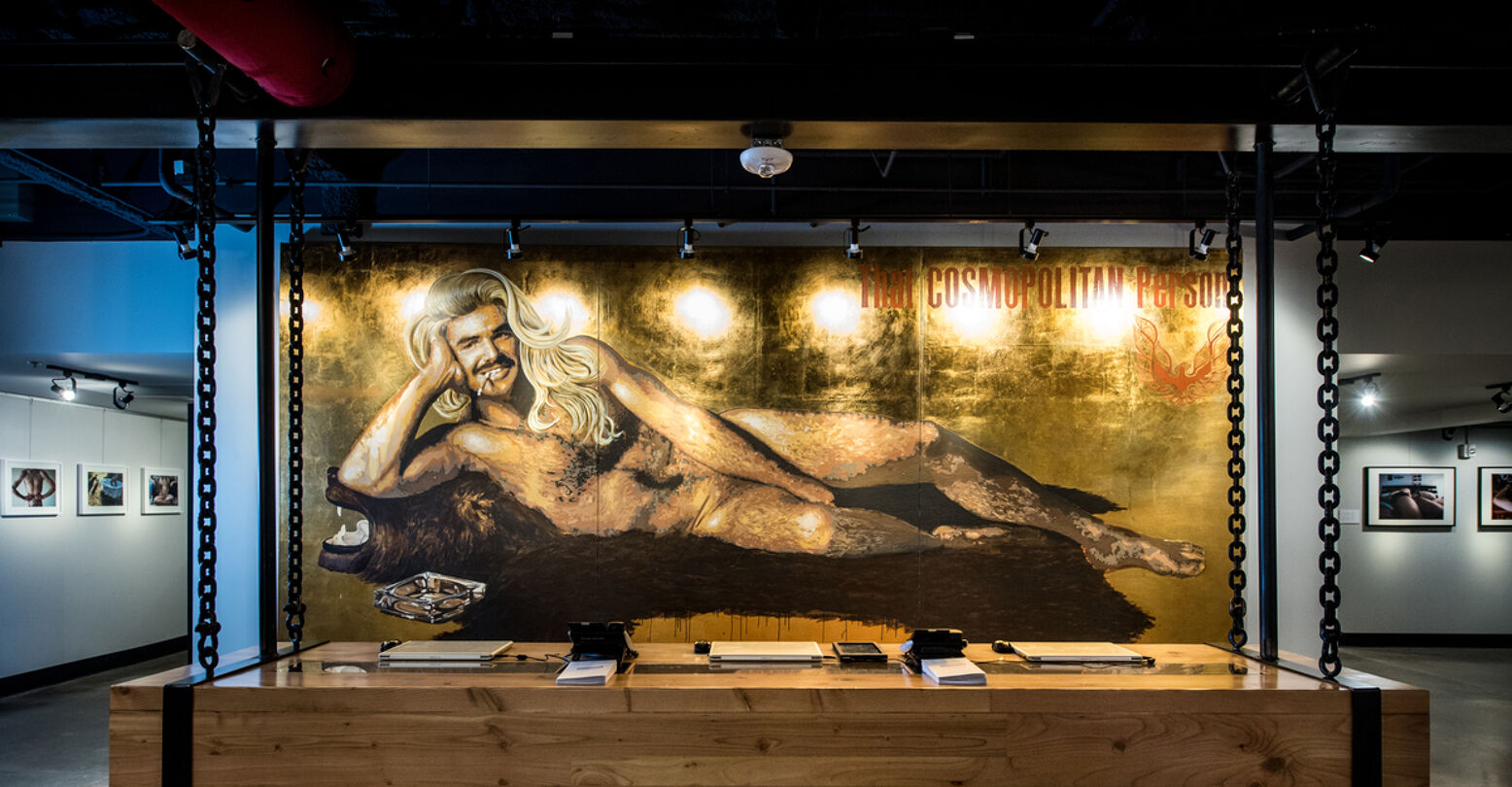 I have a soft spot for Phoenix.

When my parents left Southern California for the desert, I had already been long gone from the nest, so I figured it would be like going on vacation each time I went to go see them.

At one point, I even liked it so much that I tried to lay some roots there, but my constant travels and need for a nearby beach kept me from ever committing to the city I had seen transform over the years. Way back in the day when I first would visit, downtown Phoenix was definitely lackluster and besides the few gay bars and the monthly art walk, there was no real reason to be there, as it was mostly scarce and abandoned after regular working hours.

But today, downtown is booming with new residential high-rise buildings and incredible restaurants, and nowmodern, boutique hotels, which are attracting a new clientele outside of the convention-goers which typically dominate the downtown mega-hotels.

Granted, outside of their politics, Arizona is a beautiful state, one of my favorites. There is so much to see and experience all around, like Sedona, the Grand Canyon, Flagstaff, etc. Within the Phoenix Metro area, there are really great cities like Mesa, Glendale, and Scottsdale. And within Phoenix proper, there are many neighborhoods worth checking out like Biltmore, Arcadia Lite, and Central Phoenix.

But I’m determined to really hone in on the Downtown Phoenix area and keep it all on things to see and do within the Central Avenue vicinitybecause there’s enough to talk about within a 2 mile stretch of road.

Located in the center of the arts district, Roosevelt Row, DeSoto Central Market is all about community and providing a gathering place reminiscent of a time when the daily market was the heart of every city.

The market is a combination of boutique eateries, an artisanal market, and a deco-era bar, a bar that serves one hell of a bloody mary: The Kraken, a three-course meal in a mug which has some unusual garnishments like a cheeseburger slider and a homemade dessert that really make it one of a kind. 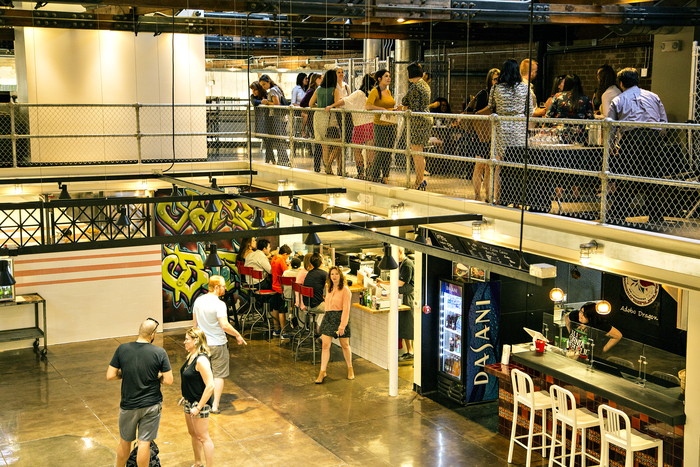 Joyride
One of my absolute favorite Mexican restaurants, check this place out during their infamous happy hours. Every day from 11am-5pm they have $5 margaritas, pitchers of beer, wines by the glass, and spiked agua frescas – and since day drinking is one of my favorite pastimes, now you see why I love this place. That, and the tacos are ridiculously good. 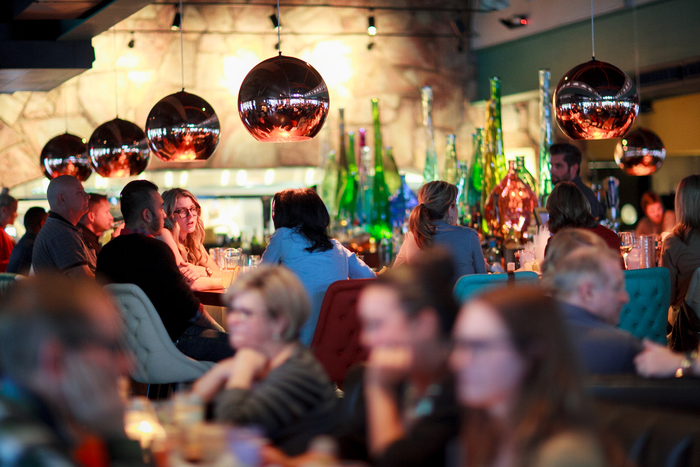 Also with a $5 until 5pm daily happy hour (same owners as Joyride and many others on this list), this place is great for some typical pub food and craft cocktails. They’ve also got an impressive brown booze menu featuring Irish whiskey, single malt scotch, and blended scotch, as well as Canadian, bourbon, and rye options. 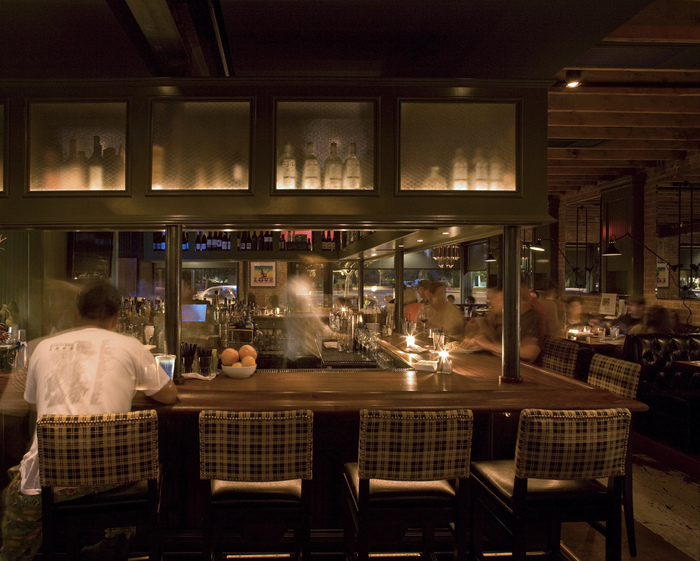 Federal Pizza is housed in a restored First Federal Bank from the 1950’s. The architecture is mid-century modern while the pizza is wood fired. If you don’t want to dine in, feel free to order ahead and then drive right up to their drive-thru window to pick up your order, but don’t forget your growler of beer. Federal Pizza has an extensive and thirst-quenching selection of beers just calling out to be taken home in a 64oz growler.

A casual urban hangout offering all three meals a day, Phoenix Public Market Café’s goal is to provide the downtown community a place to gather and enjoy a meal together. But come breakfast time, the cooks are usually bombarded with orders for their house made biscuits and gravy. The dish is served with two eggs (any style), chorizo gravy, and of course, the house made biscuits – you’ll hate and love yourself for indulging. 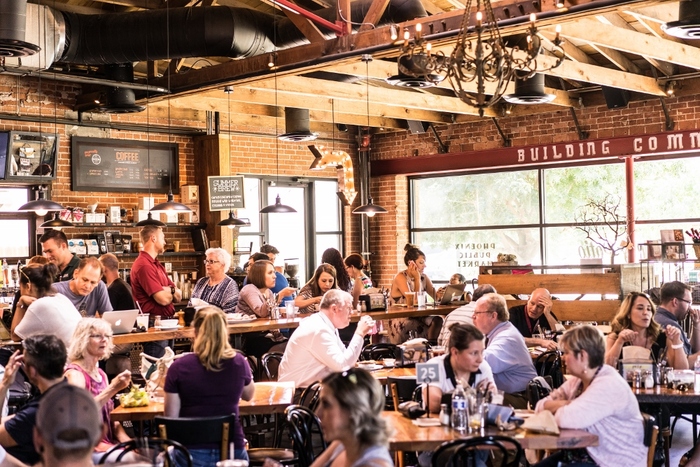 It’s evident from the love and attention that goes into their menu that this place is awesome, and the food and cocktails at Clever Koi are expertly crafted. Lunchtime here is fun as guests can build their own bowls with noodles, stir-fry, or rice options serving as the base. It’s a quick way to enjoy a delicious lunch at a great price. Pro tip: add on a small bite (the chicken & waffle bun is out of this world). Full disclosure, the owner is a friend of mine, but really, they’ve already opened a second location so you don’t have to take my word for it, the proof is out there. 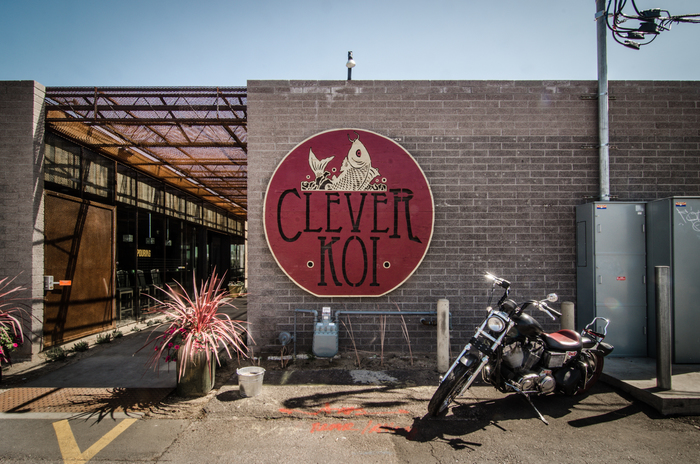 Ok, so it’s Monday and Tuesday that makes this place perfect for a date because on either night, diners can order a bottle of wine and a bruschetta for only $20. Bruschetta options include smoked salmon and pesto, tomato jam with fresh sheep’s milk cheese, and brie with apples and fig spread. It’s possible to mix and match your bruschetta, so don’t worry about not knowing which to choose.

Another Phoenix icon with a new location closer to downtown, FEZ offers up an eclectic menu. But it’s the twelve different burger options here that should call your attention, besides their really great happy hour. Burgers come in all sorts of flavor combinations, but the Bleu Cheese Balsamic with a half pound grilled Angus burger, balsamic glaze, Danish bleu cheese, spinach, red onion & aioli is a great first one to start with. Pair that burger with some spicy harissa fries or garlic and rosemary fries for a fun flavor combo.

Here you will find all sorts of sweet treats, including old-school candy, but the ice cream is what takes the cake. The rotating menu will make you want to come daily to try new flavors. From goat cheese, honey, pistachio, to Mexican chocolate, there is a flavor to please all. If you happen to see the Hangover Helper on the menu, give it a try and don’t let the ingredients turn you off because somehow, they work.

Located in the hotel I’m about to talk about below, MATCH Cuisine & Cocktails is FOUND:RE’s on-site eatery. It offers a creative menu of social plates focusing on eclectic, globally-inspired street food, made with locally sourced ingredients whenever possible, served in a fun, vibrant atmosphere that channels the spirited downtown art scene. 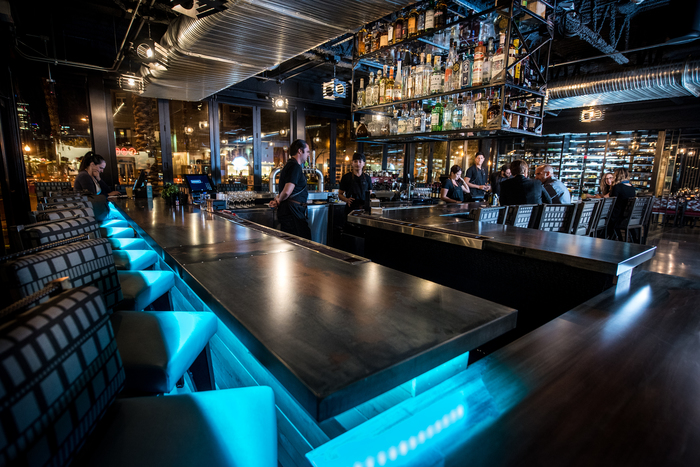 During my last trip to Phoenix, I stayed at the new FOUND:RE Hotel, a boutique, art-focused gem with an equally amazing restaurant (see above, like literallyyou just read about it). After I made my reservation, I was contacted by the staff and was asked if I wanted to take part in a new wellness program they had in partnership with IV Revival. They offered shooters (actual injections) as single or multiple intramuscular injections of B Complex 21, CoQ10, anti-nausea & anti-inflammatory, which leave you feeling relaxed before going home or give you some energy at the start of the trip. I, of course, decided to just go for a full on IV bag with anything and everything they could (safely) place inside. It was the first time I had purposely asked for an IV treatment, and being inside my really spacious hotel room made it kind of addicting. 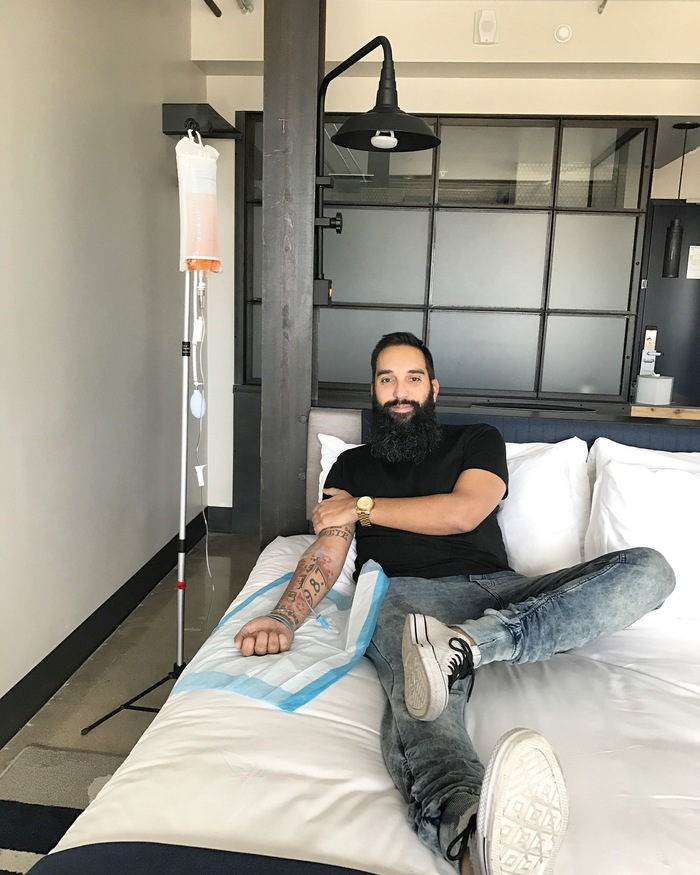 The rooms at the hotel are really big and industrial chic with a lot of the beds placed in the center of the room, making it possible to walk around them. My favorite feature was the large sink that sort of doubled as two sinks, one inside the shower and the other in the hallway. But the main attraction is that the hotel itself is an art museum, one that truly focuses on local art. Their in-house expert curator has meticulously selected works of art to grace the walls, but the art is ever changing so each time you come, expect something new (unless you are going like every weekendwhich you should). But, it’s the massive “Burtney” that’s behind the front desk that will probably blow you away (it’s for sale, so you could ruin it for everyone and take it home if you wanted). “Burtney,” a painting of a nude Burt Reynolds, created by Phoenix artist Randy Slack. The painting is a salute to Reynolds’ iconic 1972 centerfold in Cosmopolitan, with an assist from Caitlyn Jenner. “Burtney” has Jenner’s hair, which Slack painted blond to resemble both Reynolds’ ex-wife Loni Anderson and Britney Spears. (I had to borrow that epic description from Phoenix Magazine.)

The really great thing about this part of town is that there is art all over the place. From the killer David Bowie murals, to Roosevelt Row (RoRo), a walkable creative arts district in the urban core of downtown, to the endless sculptures (including some really unique ones found at each Light Rail stop – yes, they have a metro system, and it goes straight down Central Avenue), there’s enough art to satisfy your thirsty art-craving needs. But for the mother load of art, one would need to visit the Phoenix Art Museum, which has provided access to visual arts and educational programs in Arizona for more than 50 years and is the largest art museum in the Southwestern United States. 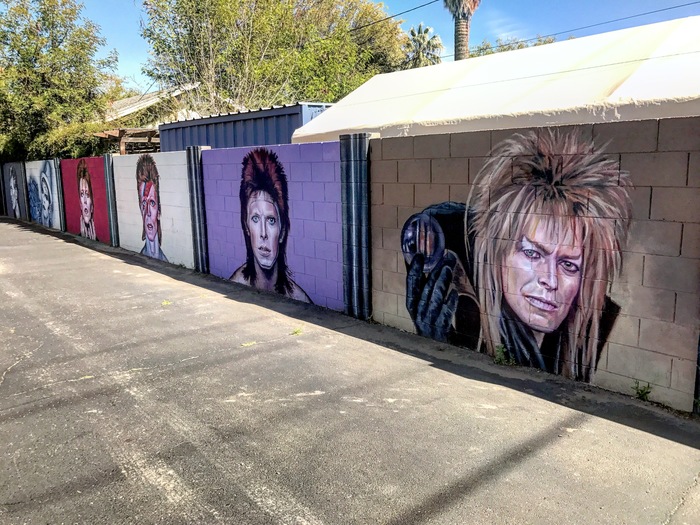 Critically acclaimed national and international exhibitions are shown alongside the Museum’s permanent collection of more than 18,000 works of American, Asian, European, Latin American, Western American, modern and contemporary art, and fashion design. There’s also a really cool T-Rex sculpture outside that’s worth an Instagram photo. The museum shop inside is also filled with some quirky gifts or souvenirs.