This past autumn, I invited my parents to celebrate my 25th birthday with a float trip through Labyrinth Canyon, a stunning and remote four day journey that meanders some 45 miles from Ruby Ranch to Mineral Bottom along a mellow segment of Utah’s Green River, just north of Canyonlands National Park. Along the way there are alcoves, towering walls of wingate and kayenta, and sandbars that pad the generous curves of the river. There is stargazing, sunshine, beer drinking, and swimming. It is the true trip of a lifetime.

Unfortunately days before our trip, my father had to pull out after tweaking his back but insisted we go on: mother and son. And so, we set off from their home in Eagle, Colorado and drove the buckling blacktop West, where Colorado gave way to the red rocked landscape of Utah one of my most dear landscapes, and one of the most abused by the current, iniquitous and asinine administration. 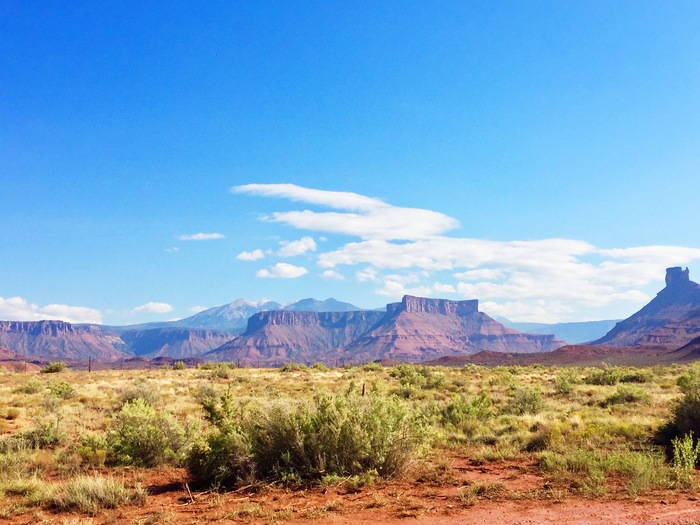 After a night in a hotel in Moab, the launching point of many great Colorado Plateau adventures, we were dropped off at our put in point by our outfitters: the wide shores of Ruby Ranch where yellow butterflies danced above the green fields of alfalfa.

There is nothing like canoeing on a river through a canyon on the Colorado Plateau. On this particular stretch of Green River, a slow and easy current pulls you along as you paddle in unisonstroke by stroke taking in the brooding canyon walls, the saccharine scent of the bank’s cottonwoods, and of course, the herons wading their thin legs on the shallow shores. Every lazy turn brings a new vista. Every dip of the paddle catalyzes the course before you.

My mother, Jennifer Griffis, once wrote a song called “Canyon Time” that was on her first solo album, “Come Tomorrow.” The song came to her a few years before the album was released sometime in 2004 after she and a collection of close girlfriends took a brief sojourn to the Grand Canyon and left their kids at home with their husbands. They hiked, bird watched, and skinny dipped in the waters of the world’s most famous canyon.

The opening lyrics of the song

There’s gold and silver down below
There’s treasure along the trail
Cowboy sends me on a dusty trail
I start at the break of day.

The cowboy, I presume to be my father, who wears an ornamented Stetson and big belt buckles filled with desert scenes and western nostalgia and spent a summer years ago in the Wind River Range, as a mounted wilderness ranger. A decade later, my father, the cowboy turned doctor, joined my mother on her second trip to the Grand Canyon as they took on the entirety of the Canyon on a two week raft trip in the spring of 2012. From stories I’ve heard about the trip, “Canyon Time” became the trip’s official theme song, as one of my mom’s biggest fans and closest friend Nancy Carlson, begged her to sing it in the most spectacular locations of the canyon: Vasey’s Paradise, the Little Colorado confluence, and after surviving the whitewater of Lava Falls. 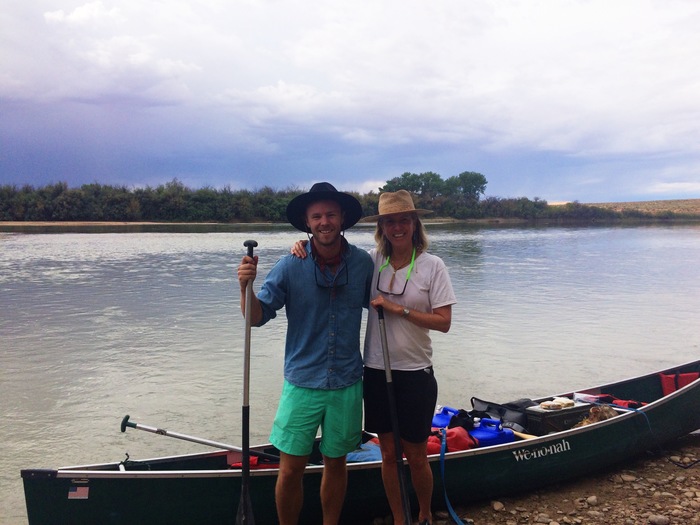 And so five years later as my mother and I commenced our trip through Labyrinth Canyon, I couldn’t help but hear the chorus of the song as the walls of the canyon grew steeper and enveloped us into their chasms. While we weren’t on the currents of the mighty Colorado that flows through the Grand Canyon, the song still applied to the Green

On the first day of our trip, we encountered cracking thunderstorms that grumbled throughout the canyon, echoing off the walls and shaking our hearts. As the storm overtook and darkened our small canyon world, we sought refuge on the sandbars of the banks to avoid being sitting ducks in open water in the fierce electric storm- close, near, and terrifying. And to our surprise, on the first sandbar we sheltered ourselves on, we discovered black bear prints in the sand.

Typically, bears don’t come down that far into the desert. They more usually reside on higher elevations, like the flanks of the nearby LaSalle Mountains that hover over the Canyonlands with white tops and purple-green coats. But there on the muddy sand were the unmistakable prints complete with claw marks. Ursus americanus. We flocked for other sand bars and waited out the storm, a stinging deluge of hail and rain accompanied by the CRACK and BOOM perussives of thunder. 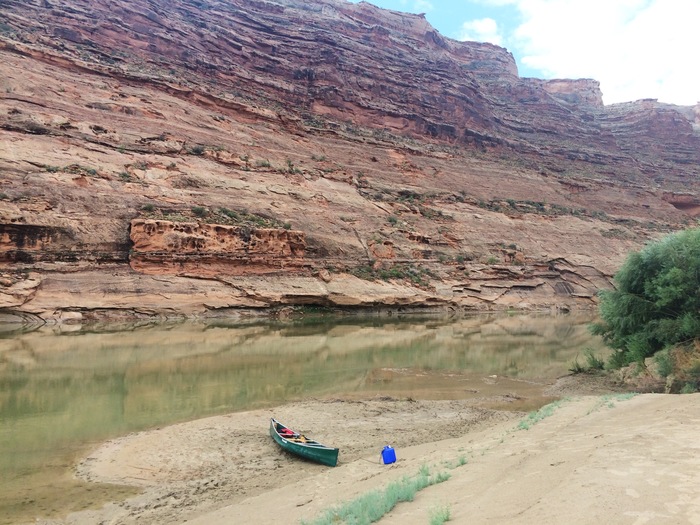 Unfortunately, the storm wasn’t the last of our trip and the sand bar wasn’t the first to provide us temporary safety. Our first night, we pulled into camp after six hours of paddling. Drenched from the rain, nearly hypothermic, purple-lipped, and teeth chattering. The Colorado desert showed us its extremes accentuated by cold rains, but also its kindness; a ruby red sunset that illuminated a towering buttress blood orange. And that evening, full of freeze dried camp curry and a few swigs of tequila, the stars framed themselves in the narrow sliver of canyon above us.

On our second day, we woke to sunshine and waited for it to find its way to our campsite and eviscerate the shadows that held the morning’s chill. Then, we broke down camp, packed the canoe and set off for the ambitious day before us which included many miles of paddling and a short side hike to the saddle of Bowknot Bend.

With my mother in the bow, I steared us through the snaking Green as we caught up further, having not seen eachother in a few months- I had moved to Los Angeles a year and half before. We talk about my hardworking, successful, and benevolent sister, Allison, far away in the canyons of Manhattan and then of the wilderness of my new city. My mother’s questions are always engaged, at times cautious and controlled, always thoughtful and supportive. I had come out my sister, mom, and dad four years before, all in one go. We laughed in the sun as I explained the misery and difficulty of queer dating in a city as super and messy as Los Angeles. 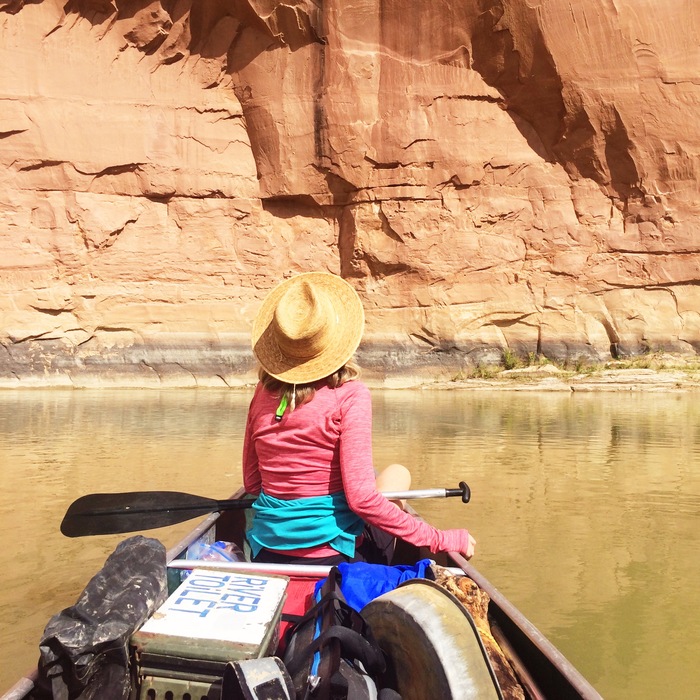 By lunch, we reached the trailhead, a subtle pull off on the canoeists right were a cottonwood slumped over the river and dropped a few of its yellowed leaves. We ate sandwiches, mixed Gatorade powder with the water in our Nalgenes, and slathered sunscreen for the short but steep hike ahead. After a full morning in a canoe, it was nice to stretch our legs. A series of hairpin turns took us over the rough geology and rougher flora of prickly pear and fish hook cactus. I took my mother’s hand over the sketchiest section, a fourth class scramble but she didn’t need it, she was a bighorn sheep, scaling the rocks before her until we reached the saddle.

It’s hard to describe the vista because it is a place that stands still and is a place that does not belong to to the past or future- it is a realm of its own. I watched my mother carefully taking in the view, slightly scared of the steep precipice on both sides. Looking West, at the course of river we had already paddled- our past- that led us there. As she turned clockwise, the massive butte of Bowknot Bend came into view which the river disappeared behind and wrapped seven miles around. Then to the south, the river came towards her and she greeted it, before it turned and its shores hit the bottom of our saddle only a few hundred feet from where our canoe was anchored. Eventually, the water will erode the saddle and leave the seven miles we would later paddle, completely dry. 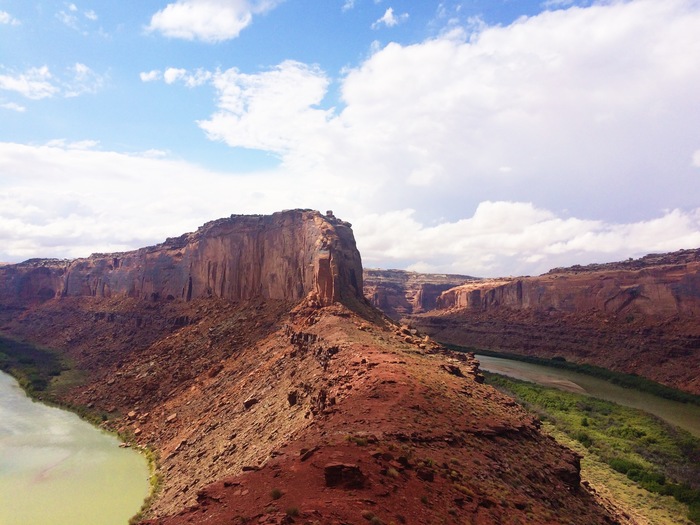 We assessed the vista, the river in both directions, our past and our future all at once. It’s not often I use this word, but there on the saddle, the word timeless applies.

We descend the saddle and find our boat waiting as patient as well trained pooch tied loosely to the cottonwood gently being tugged by current. As soon as we began to paddle, the second storm of the trip chased us as we circumnavigated the Bowknot. This one, much fiercer and far more persistent than the first. It harassed us for hours as we curbed the bend and continue to sections of the river we couldn’t see from the saddle; the true unknown. 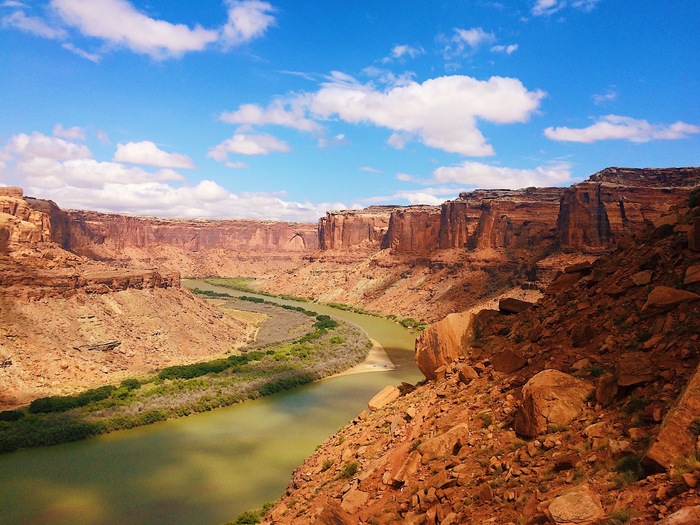 Ephemeral waterfalls began to appear on the slick and blackened walls of the canyon and cascade onto the blocks the walls have shrugged off. Our conversations come to a halt, only exclamations of the storm’s ferocity and our inability to find a flat campsite- most had already been taken by other paddlers. But, my mother is hardy and she paddled on strongly and in unison with me until we come across a suitable sand bar far from where we had planned to camp.

Setting up camp in the rain, no one likes it, but we sang the river’s tune, the one of the wren and the cottonwood wind and the shake of tamarisk. Quickly, we set up camp and snuffed our shivers with dry clothes and sleeping bags. We were tent bound but happy and soon fell asleep to the thunder ricocheting through the deep alcoves like a pinball through it’s machine. A hostel yet calming lullaby.

In the morning, nothing but sun and with breakfast, my mother suggests the beers that we hadn’t had much of a chance to drink, still cold in our Yeti cooler. An with so much rain, the river runs noticeably quicker before our campsite. 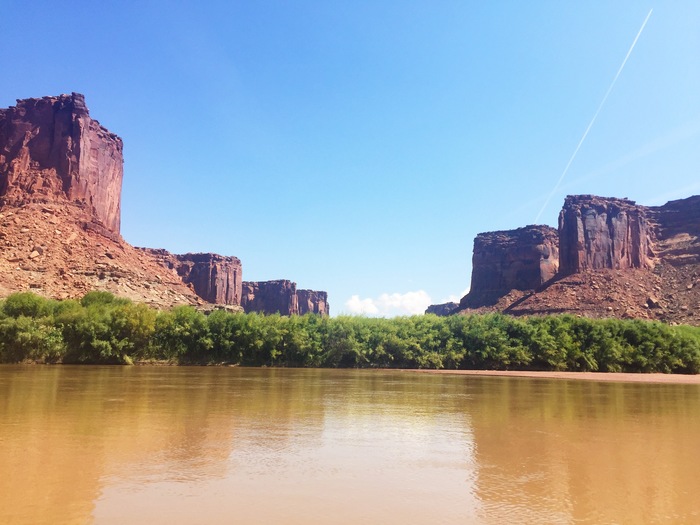 We sip our Pacificos as we break down camp and feel the sun on our bodies, a gift after such torment. All that is before us is a short two mile float to our pickup point. We swim, like happy otters before pushing our canoe off the sandbar. But, we don’t paddle, we float the final stretch slightly buzzed, feeling high as kites in the wind, rather, like great blue herons to the canyon’s zephyrs. In the bow before me is my mother. The kind, strong, and unselfish peacemaker. I am in as much awe of her as I am of the thousand foot walls of Labyrinth Canyon carved delicately by time.