Here among black spruce on the rugged western edge of Newfoundland in Gros Morne National Park, we are battling a brisk wind that has rammed itself across the Gulf of St. Lawrence.

Along with soaring shorebirds and spits of rain, it brings us diction. 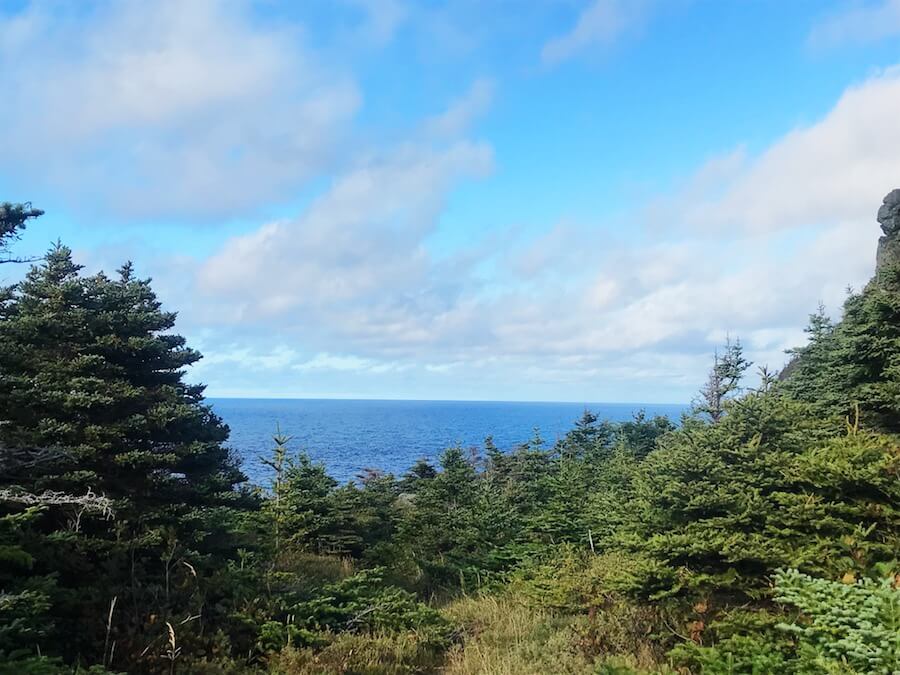 Tuckamore (plural tuckamores)—noun—A spruce tree bent and entangled by winds on the coastal shores of Newfoundland.

Some Newfoundlanders I meet simply just call it tuck.

These tucks are tight as Trinity’s, not so much meaty but very, very evergreen. These tuckamores are the result of relentless calamity, of gales and spindrift, another word the wind delivers. A phenomenon that has salted the coniferous cleanliness of these hardy spruce needles.

Spindrift—noun—Sea spray, especially spray blown from waves during a gale.

These dwarfed trees crouch on the high cliffs.

They look like green clouds stretched by a high wind,  like cotton candy pulled from the paper stem, like the well-groomed but irregularly-shaped beard of an old, wizened man—like shapes I know I’ll have a hard time reimagining when I try to configure them in prose.

These trees are little heroes, I surmise. Brave little queeros.

Mascots in self-worth and survival.

They have been bruised and battered by the insults and harassment of northern Atlantic winds; tortured by snows, ice, sleet, and bone-chilling rain.

Yet still, they retain their place on the unforgiving terrain.

Their resistance is persistence.

They are immune to torment; made themselves invincible to wretchedness by banding together to form an impenetrable fortress. 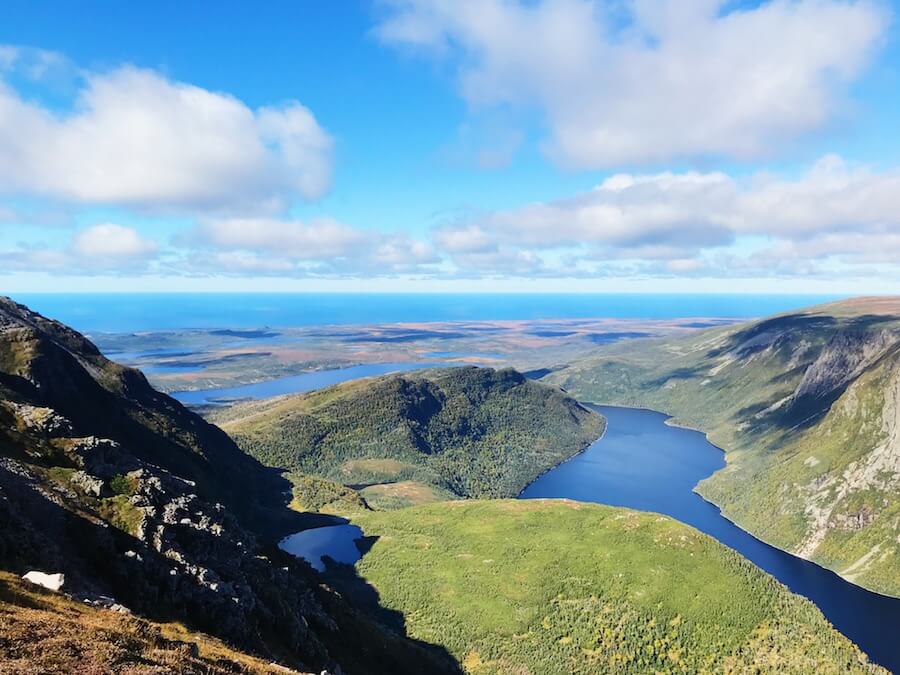 Like the trees, I cower high above the sea for relief from the wind. My rain jacket is spruce green and I duck beside the tuckamore and I wonder how long it takes one to be bent out of shape, into invincibility.

I look out over the sea through my binoculars hoping for puffins and albatross, but I zoom in as far as I can and seek the North American mainland on the horizon.

It is too far.

I can only imagine the mainland of Canada—of maritime Québec and the mystery of Labrador to the far, far North.

I imagine all of us as little spruce trees sculpted by our own tribulations into our own individual shapes.

We climb this peak on our second day in Newfoundland.

Its scalp is an arctic-alpine of an ‘island’ left over from earlier times where white, arctic foxes still pounce. 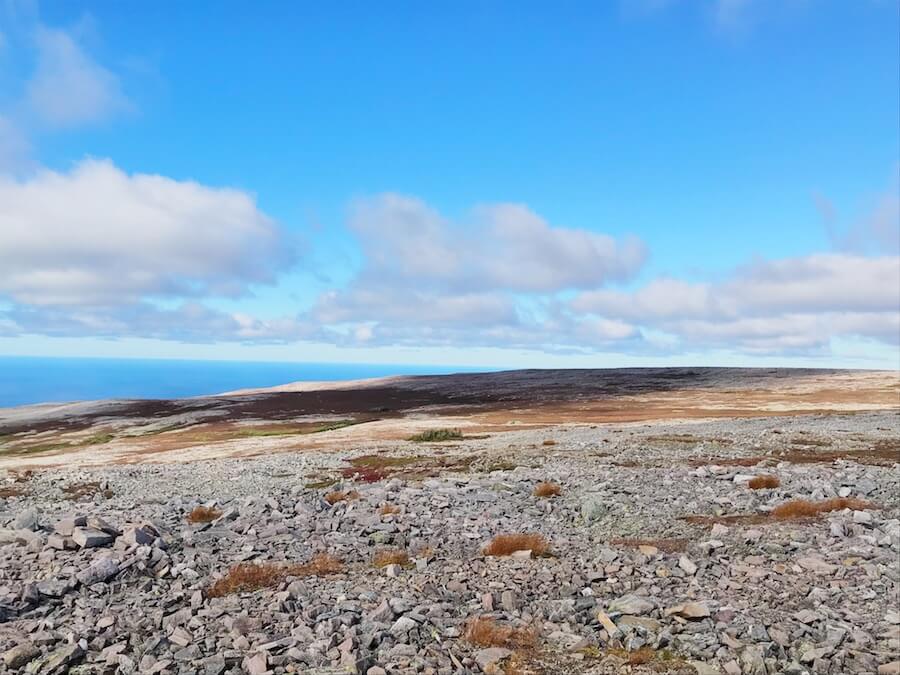 It takes nearly a half day but we arrive on the summit.

We see grouse bleaching their feathery coats for winter, luminescent lichen on rocks, a lone caribou, fossilized trilobites imprinted in rocks, and hawk eye views of freshwater lakes with 2,000-foot cliffs that were once fjords until the land rebounded and they were ostracized from the sea.

On our last day in the park we take a boat up one of these fjords, Western Brook Pond, where we see falls like Mare Piss and walls you’ve been tricked into thinking exist only in Norway or New Zealand. 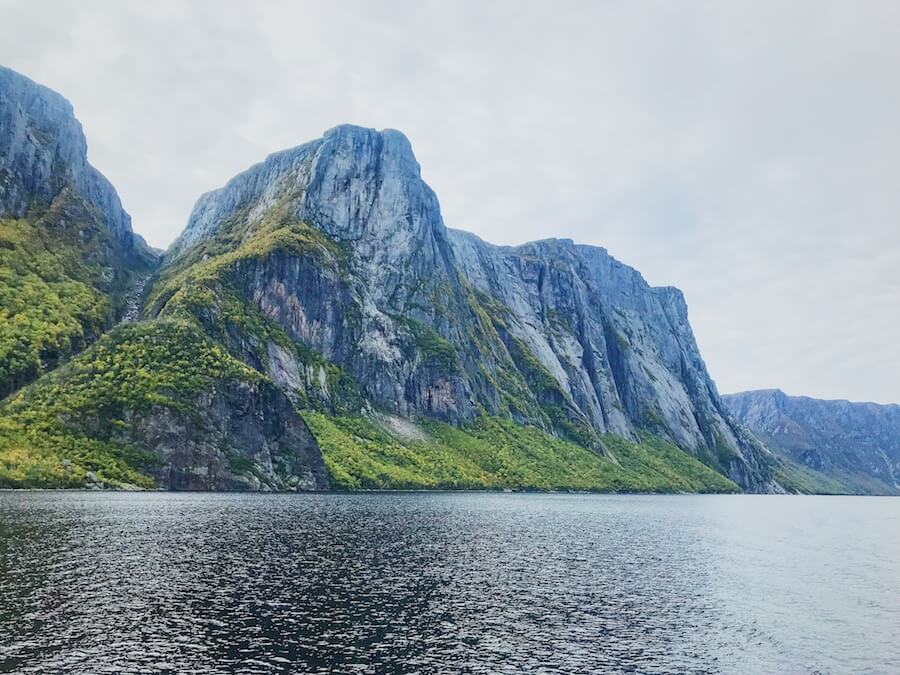 Pond—noun—Typically, a small body of still water formed naturally or by hollowing or embanking. But here, in Newfoundland, ponds are massive lakes, which I admire. It shows the Newfoundlander’s charisma and hardiness—to make the vast and foreboding bite sized.

There are two common ways to arrive at Gros Morne.

The first is a six-hour ferry from mainland Nova Scotia to Channel-Port aux Basques, Newfoundland, followed by a three and a half hour drive.

The second is a direct flight from Toronto to Deer Lake, with an hour and a half drive to the park via the Viking Trail, highway 430.

We take a segment of the Viking Trail which eventually winds itself all the way to the northern peninsula to L’Anse aux Meadows where the only proven Viking settlement in Canada rests.

It is an overcast autumn morning and the rolling road is slick with last night’s rain. 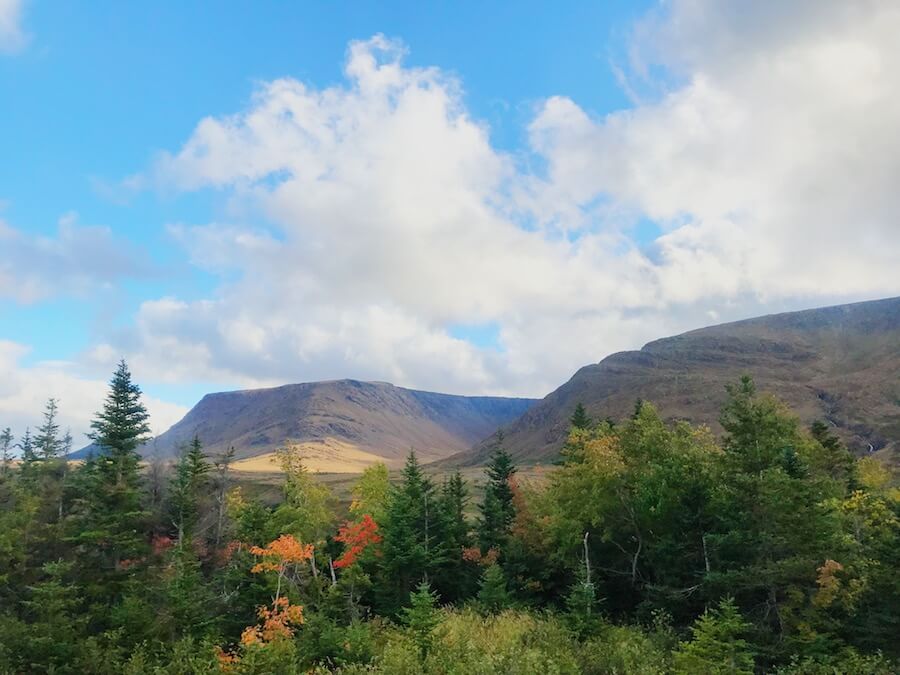 Lining the highway are birch trees popping their bright fall reds like lovesick confetti and every so often, yellow caution signs depicting wrecked cars and giant bull moose with racks the size of bumpers.

As fellow INTO travel writer David Duran drives, I am on moose watch looking vigilantly for unexpected Alces alces.

It is estimated the park is home to the largest density of moose in the world, and our guide, Neil from Tour Gros Morne, whom we meet at the park’s visitors center, later tells us of the region’s specialty moose-burgers—and that many locals have freezers full of moose meat stored for the winter.

While some tourists come to hunt moose in the surrounding region, most come to the park for rocks.

Neil walks us through the center’s extensive geology exhibition—we take note of the peridotite—which Neil uses to explain in the park’s founding as not only a national park, but as a UNESCO World Heritage Site. 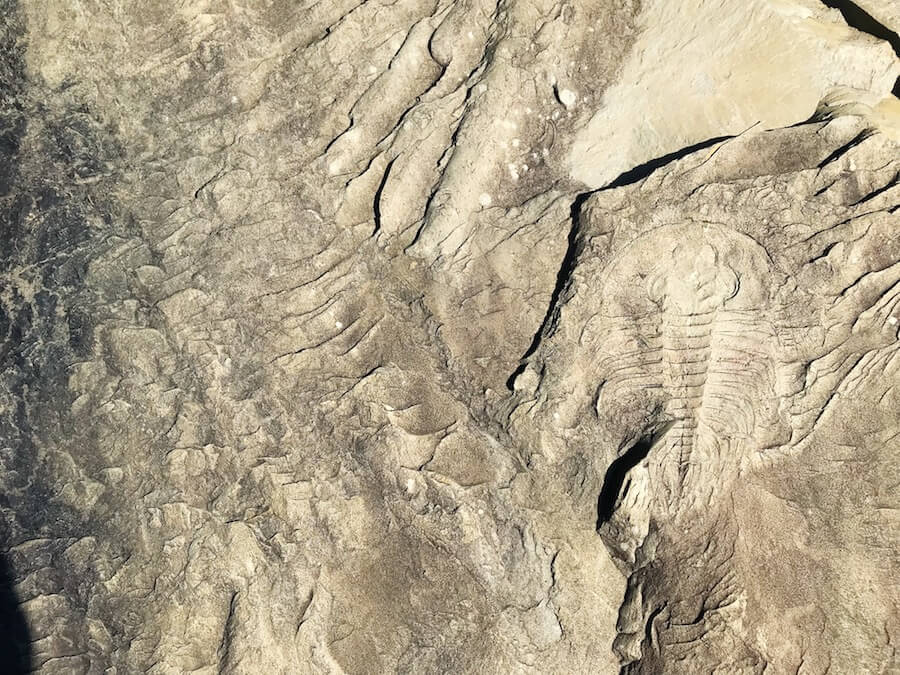 In layman’s terms, the park is the geological field lab equivalent of Einstein’s laboratory.

It is where the theory of plate tectonics was provided by geologists Robert Stevens and Harold Williams. It is also one of the few locations in the world where a segment of the Earth’s mantle lies exposed, for all to see.

Mantle—noun—a silicate layer of rock inside a planetary body bounded below by a core and above by a crust.

As David, Neil, and I drive to the exposed mantle, a mountain called the Tablelands, I muse on other silicate rock layers in our solar system like Mars, the moons of Jupiter like Europa, Io, and Ganymede—named for Zeus’ most handsome boy.

Tablelands—noun—(as defined by Across the Blue Planet) a barren reddish brown plateau that towers seven hundred meters above the Atlantic Ocean, stands alone as an alien landscape amongst the lush and hilly forests that encompass it.

We thread a rolling pass and descend into a valley so vast the road through it gambols like a wet tar ribbon.

We spot three caribous in the valley by a creek.

We are sure they are fattening themselves for winter.

When we step out of the car onto the trailhead, the peridotite rocks carpet the ground and stack themselves up the side of the Tablelands to 2,356ft—a landscape as bare as smooth buttocks—with tufts of vegetation in the gulches.

As we begin our rainy hike onto the weathered rockscape, I am overtaken by exposure. Today, we are stepping on rocks half a billion years in the making.

We stand on a segment of the earth’s mantle, described in the visitors center poetically as the Earth’s soul, that that has chosen to expose itself unabashedly for all to see.

This is the earth undressing itself.

This is the earth leaking its own nudes every day for the past 500 million years before nudity and nude leaks were a thing.

This is earth as an exhibitionist flaunting not only its curves but its vulnerable soul.

This is the earth in centerfold. 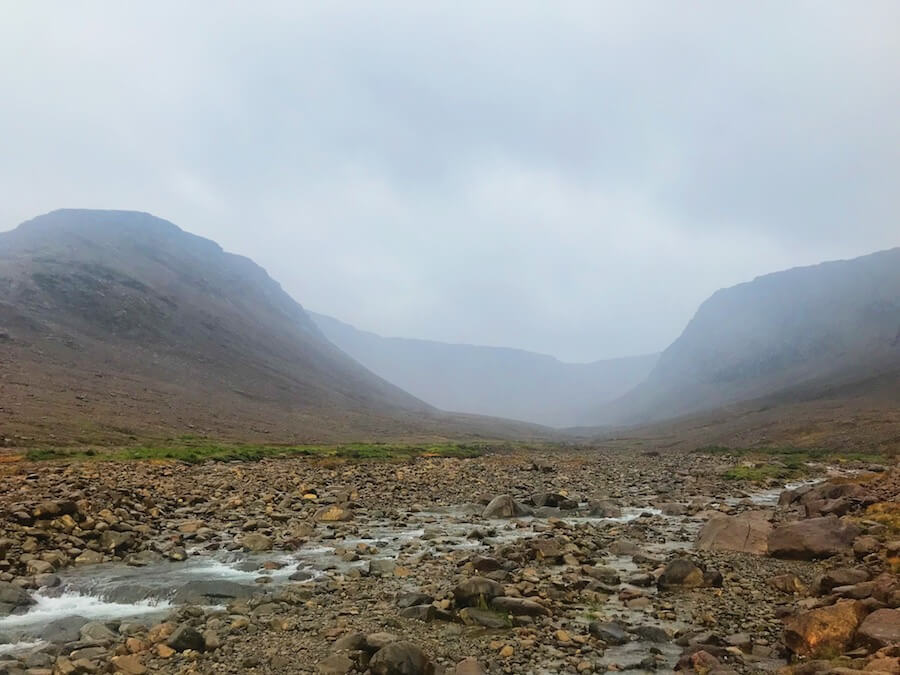 It is also a rust rocked landscape that I imagine Martian expats might migrate to. And like Mars, it is barren. Few plants poke up from the land because the minerals of the rocks are toxic to most flora.

Except of course, for the carnivorous purple pitcher plant, which Neil points out to us on the side of the trail.

This is a plant the people of the province of Newfoundland and Labrador are particularly proud of—it is not only their provincial flower, but also their mascot which decorates their license plates, road signs, ferries, and official documents.

It is their logo. 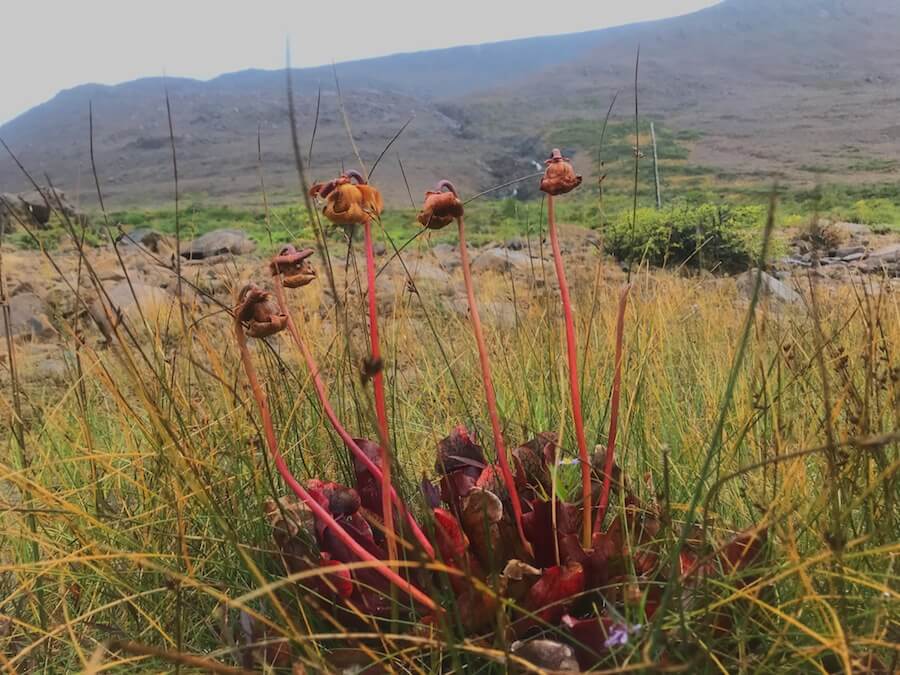 Like them, and like the tuckamores of the black spruces, the flower is another being of resilience and gorgeousness on the Newfoundland landscape the parachuter traveler sees as seeming inhospitableness.

These pitcher plants among the rocks the hue of a lion’s mane are as colorful as the laundry lines we see in communities surrounding the park.

The ones with freshly knitted wool neon socks on sale. Sold literally on the line. Or like the wonderfully polychromatic quilts the island is famous for, the ones ruffling in the sea breeze by the towns of park like Woody Point, Cowhead, and Norris Point.

Quilts, as described in the thesis of Lisa Ann Wilson as “emblematic of the ways in which individuals use creativity to help generate and affirm of both individual and shared senses of identity, meanwhile helping them (older generations) to confront the changes to the culture around them.”

Quilts so colorful and flamboyant and wonderful that it is hard to see them as anything but prideful.

We leave the bright plants to their neverending meal.

We walk through the intense rain until we come to a surging waterfall in the middle of one of the basins of the Tablelands, which, after such a deluge of rain has changed the rock’s color like a chameleon. No longer does the massive mountain emit a Martian orange—now the rocks are maroon, like the Bells in Colorado.

Otherworldly—adjective—Of, relating to, or being part of a reality beyond the observable physical universe. 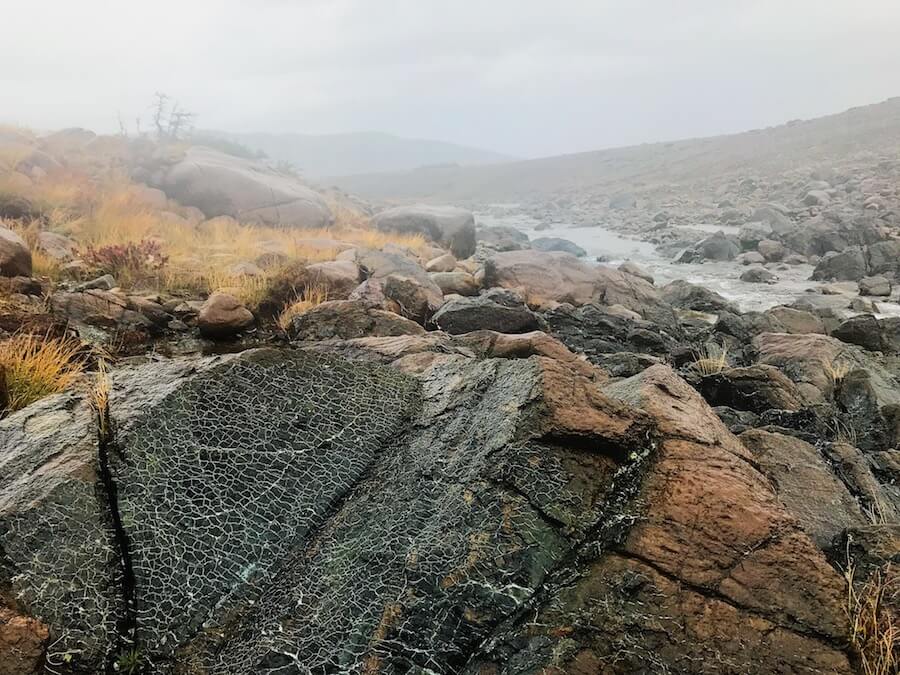 As we return to the car, I imagine a bluebird summer day on the Tablelands. I imagine the contrast of the robin-egged sky against the soft orange of the dry rocks. The little hush of the stream and the buzz of a fly on its way into the belly of a pitcher plant.

But Neil is on to other seasons, telling us stories of winter when he skins to the top of the bowl of the Tablelands and skis down in wonderful, swishy turns.

This lovely man is telling me he has skied on the mantle of our earth. He is only adding more proof to my argument that our lives are fantasy novels if we let them be.

Preternatural—adjective—Beyond what is normal or natural.