In California’s Death Valley National Park, you can find over 300 bird species, 51 different kinds of mammals, 36 classifications of reptiles, 6 species of fish, 5 kinds of amphibians, and over 1,000 plant species. While all of these give me life, two species specifically stood out on a recent five day trip to the lower 48’s largest and most desolate national park: the Canyon bat which dive bombs over mythical dunes and the Bristlecone pine, which roots itself resiliently on the park’s highest peak.

In this second section of a two-part series on Death Valley National Park, we will peregrinate o the park’s highest point, Telescope Peak, to accentuate the ancient Bristlecone pine. A magnificent being that survives against all odds on some of the most extreme terrain giving us more life than any death drop, workroom entry, or savage read could ever germinate. 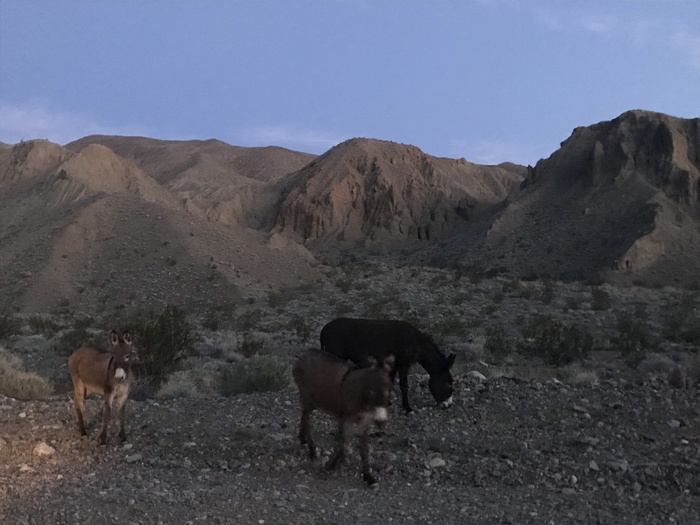 Not long after entering the wild and wooly western entrance of Death Valley National Park, I was greeted by three wild ass.

Their thick, shaggy coats of browns and greys were being rustled by a little evening wind that cooled the upper desert in a unique transition zone where the badlands smooched the montane. I drove by the equines at a tortoise’s pace trying not to frighten them as they perused the rocky roadside for sprouted grass until I found myself at a full stop, windows down, noisy engine off, admiring their long ears, white muzzles, strong withers, and gentle demeanor. They approached hesitantly, hoping for snacks. 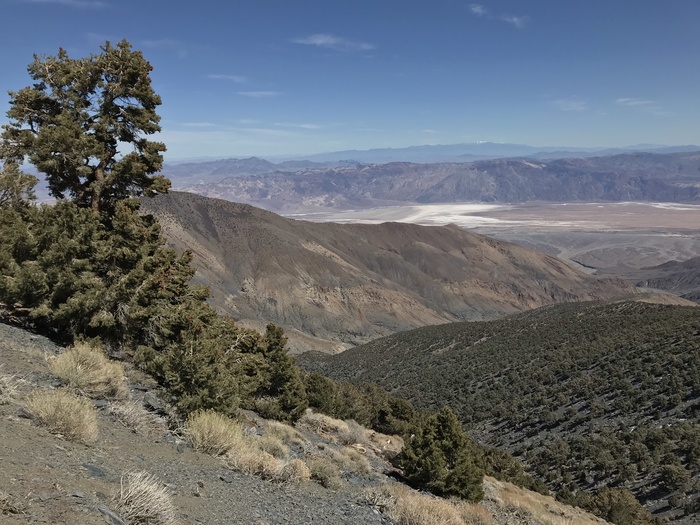 I was on my way to Mahogany Flats, a campground cuddled in the mahogany at the end of Death Valley’s highest road to sleep for the night before attempting the park’s highest peak, Telescope.

Later down the road with twilight settling in (and after a sorrowful departing with the asses), I was spooked by the Wildrose charcoal kilns, a strange cluster of ten 25-foot tall beehive-shaped structures once used to make charcoal for miners of the region to burn, but now empty, and thick with the smell its long past byproduct, the kilns glowing in the silvering moonlight, appeared to be some kind of extraterrestrial house out of an ominous science fiction novel, further adding evidence to the theory that Death Valley is truly out of this world.

I parked my car at the scary kilns. I gathered my backpacking gear and began a brief mile and a half hike in the dark to camp at the campgrounds for a good night of rest and acclimatization before waking early for a summit attempt on the snowy 11,043-foot peak.

The first few miles of the 14 mile round trip trail up Telescope begin in the rich mahogany and clean smelling piñons before skirting the rounded flanks of Rogers and Bennett Peaks. Here, on the hiker’s left the great expanse of Death Valley can be seen sinking some 10,000 feet below as enormous alluvial fans spill their remnants into the sea level salt flats of long forgotten lake. Here, a hiker can look down to Badwater Basin, the Devil’s Golf Course, the Funeral Mountains bookending the narrow valley, and even, to Nevada where Mt. Charleston looms high and mighty over Las Vegas. 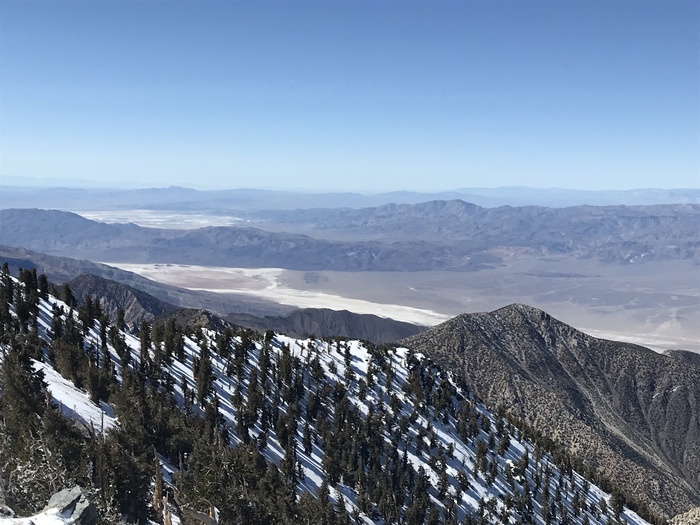 Some four miles in on the Telescope Peak trail I came across a wide saddle between Bennett and Telescope, another otherworldly landscape called Arcane Meadows. Here, the slopes are punctuated by furry cactus, and on my climb, snow drift clung dearly to them, hiding in their shadows to delay their impending melt.

As I took the ridge higher, snow coverage went from polkadot to blanketing while wind transitioned from non-existent to gale force. For my own safety, I paused to throw on micro-spikes and ready my ice ax for a self-arrest in case I took a spill down the nasty knife edge of a ridge that taunted and teased and spanked me all the way to the airy summit. But lucky, careful, and determined, I made slow progress and neared the summit where I came across the company of a shaggy Bristlecone Pine stand. Old friends.

The oldest (non-clonal) known living organism in the world, is Pinus longaeva: the Bristlecone Pine. That particular long living tree is unnamed but roosts on the high slopes of the White Mountains, California, the next major mountain range to the West from my perch on the Panamint Mountains. The tree is currently estimated to be 5067 years old meaning it’s not only two and half times older than Christianity itself, but also, that it sprouted nearly a hundred years before the stones of the Great Pyramid of Giza were quarried.

Pinus Longaeva shows its age in its gnarled appearance of deep fissures and twisted roots. Its needles come in fascicles of five and its cones as ovoid-cylindrical. They are dispersed by forceful gales, like the ones I sheltered myself from with the help of the great tree’s trunk, 10 feet around. In such wind, the Bristlecones are indifferent, swaying slightly, relying on their hundreds to thousands of years of experience harassment from the elements: wind, blizzards, freezing temperatures, pathetic soils, high altitude solar radiation. 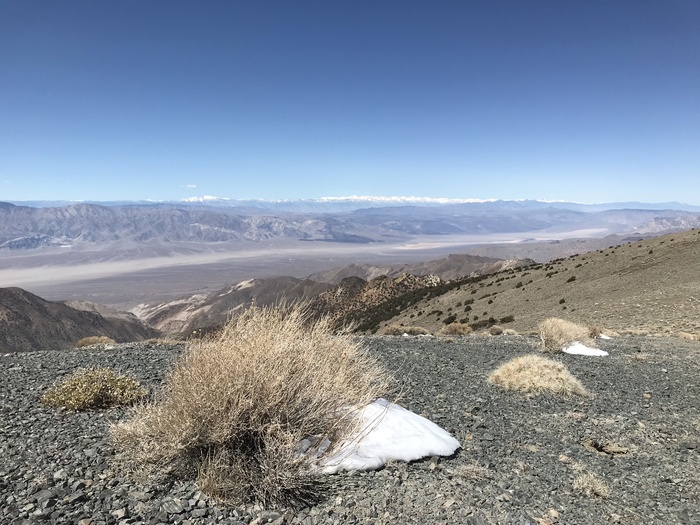 As I was waited for calmer winds for my final summit push, I warmed in the the pocket and respite the old tree provided from the wind and I’d be lying if I said I didn’t kiss it at some point. You know, as a “thanks” but also as an earnest love profession. I also extended my arms around its broad, thick, orange base, and give it the best bearhug I could and whispered all kinds of sweet everythings into is xylem and phloem. 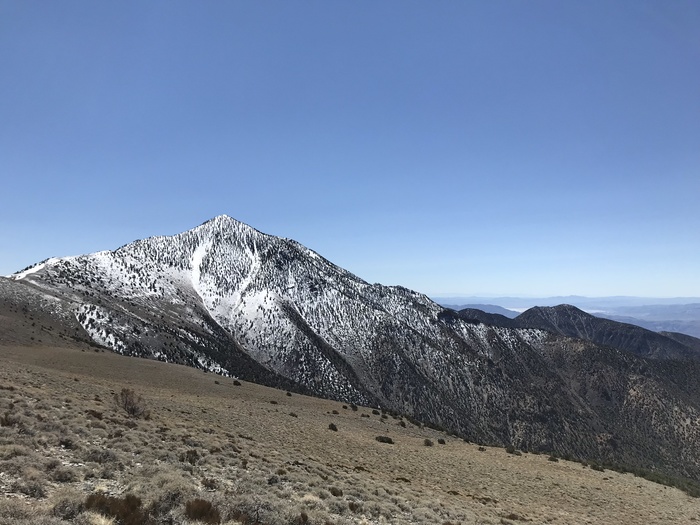 And as I scrambled the final push to the actual summit a hundred feet off in the distance, I was looking at the Sierra Nevada mountains, baby powder white with a winter of snowpack. I then regarded the White Mountains where the oldest living Bristlecone sways in a secret location guarded by scientists, protecting it from the vandalization of the public.

And I began thinking, if these trees can survive a handful of millenniums at the mercy of eroding forces, if they can live the cliche and grow where they are planted by forgetful nutcrackers in poor, arid soils, then let these wide, lofty, and wise trees be our mascots. Let them be our heroes and heroines in the fight for our resistance to our own eroding forces. Let us always persist with Bristlecone pine resilience.