Driving into the city from the airport, I saw the city skyline in the distance, above the rows and rows of red brake lights. It was overcast and the traffic coming into the city was horrendous, but coming from Los Angeles, I was no stranger to traffic, although I did question my decision to fly to Chicago during the depths of winter.

The truth is, I once spent some years there, and so I had a soft spot for the city, even during the winter. The diverse neighborhoods, the food culture, and the architecture all beckoned me, and I wasn’t going to miss a moment to see and do as much as I could over a long weekend.

An Artful Way To Start

I was on my own for the first couple of days, before I would be joined by my plus one, who was flying in from Florida, had never been, and was in for a rude awakening with the difference in weather.

After checking into the recently rebranded The Blackstone Chicago, I headed up to my corner room where I was greeted with stunning views of the city and Willis Tower through one set of windows and the lakefront through the other. My eyes also noticed a bottle of bourbon, ingredients, and instructions, so I put my mixing skills to the test and stirred up an Old Fashioned.

The lighting in the bathroom was impeccable for photos, so I was excited to have the contrast from the brown cocktail against the vibrant black and white patterned wallpaper, with the epic lighting. I was happy with my drink, my Instagram was satisfied with my photo, and all that was left was to head to dinner. 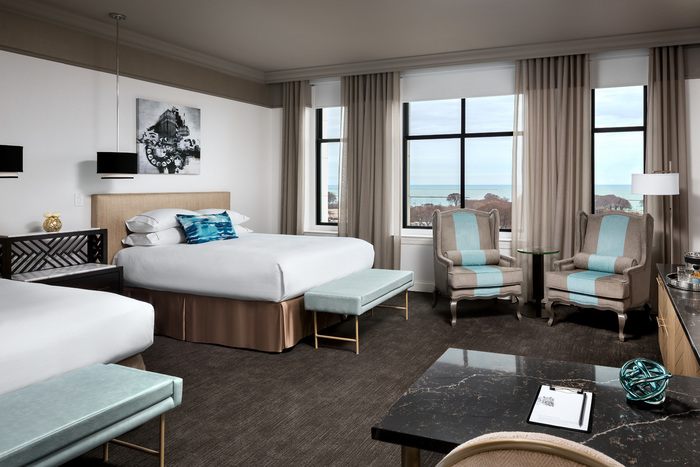 Since I considered myself a local, from my time spent in the city, I opted to walk to dinner at the Museum of Contemporary Art, which was to be my precursor to my meal. I’m a sucker for contemporary art, so I was very excited to wander the grounds and get lost in some of the wackiness that was there.

The different styles of contemporary art, especially those using mixed media were of most interest. Additionally, anytime I see any art by Jeff Koons, I get a bit giddy as his playful art brings me back to my childhood.

My dinner date that evening was an impressive space created by renowned British artist Chris Ofili. Even though I was dining solo, I was so distracted by the environment around me, that my mind was totally content with the silent stimulation. The mescal concoctions the server kept offering also helped.

When I usually dine alone, I spend time on my phone, or I rush through my meal, but at Marisol, I savored each and every moment and I didn’t want my food journey to come to a close. Chef Hammel’s menu was its own work of art. 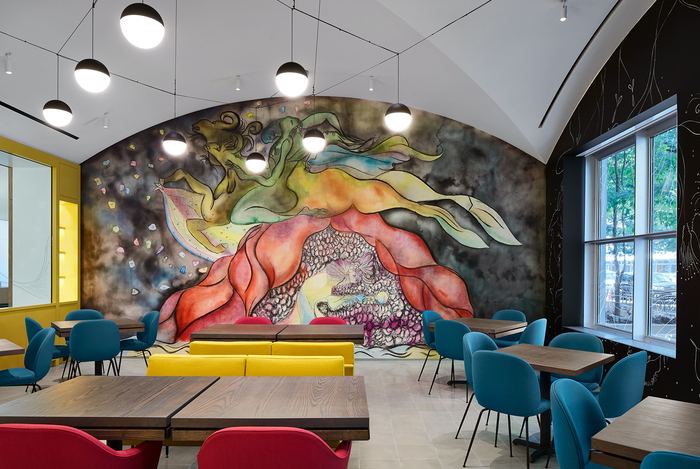 The next day, after waking up from that food comma Marisol put me in, I joined a group of strangers for a food tour of the West Loop with Chicago Food Planet. Thankfully, it was the tour with alcohol accompaniments so my social skills amongst strangers were primed at the appropriate level.

In total, we hit up four establishments and ate our faces off, while learning about the neighborhood. I loved our guide so much that I had to tip her using Venmo because I felt that the cash I had originally planned to give her was insufficient. And I loved my new eating (and drinking) buddies so much that we continued the party even after our leader parted ways.

Bar Takito and their impressively massive mescal menu played host to my new friends and me for a few hours, before I was off to The Blackstone in another food-induced coma. For reference, each stop was a place I’d happily go back to. Urban Belly – for dumplings. Bonci – for the best Roman pizza outside of Rome. Forno Rosso – for the best Neapolitan pizza outside of Naples, and Do-Rite Donuts – for both their chicken sandwich and their donuts. 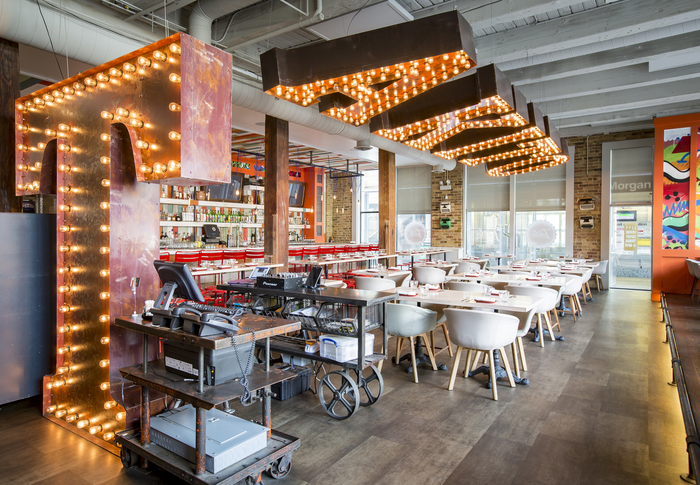 Michelin On My Mind

Waking up on day three meant I’d be joined by my plus one, which also meant I had to meet him at the airport with the proper jacket, since I knew he hadn’t packed one, and a change in scenery – The Publishing House, a new luxury b

After I picked him up and clothed him, we took the train directly into the city to explore a bit. A quick stop at the American Writers Museum was a must since I wanted to get inspired and then we just wandered until we found ourselves at a crowded protest in support of gun control, just opposite the river of the Trump Tower, the now second tallest building in the city.

I personally think it’s a gorgeous building, besides the name slapped on the side of it. 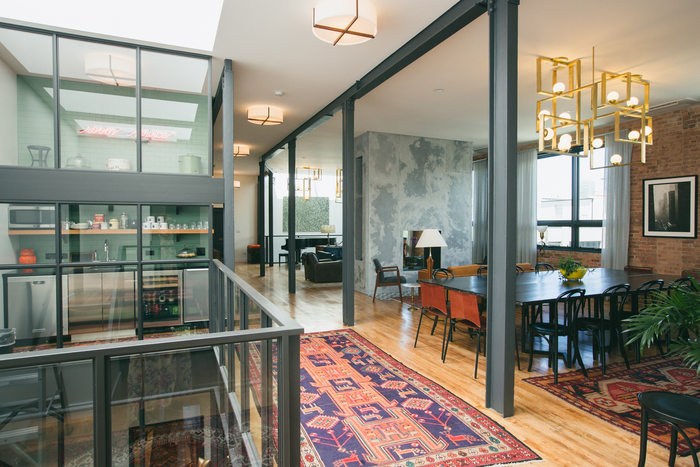 Dinner that evening was a special experience. Band of Bohemia, the world’s first brewpub with a Michelin star wasn’t nearly as pretentious as a Michelin-starred restaurant should be, and the service level made anyone feel welcomed and comfortable.

We were fortunate to dine at the chef’s bar (table) that overlooked the entire kitchen. Our expanded tasting menu was beautifully paired with both wines and their own beers. We also snuck in a few cocktail pairings and ended the night with buttered rum, which was totally unnecessary but worth the calories.

Although the food and drinks exceeded our wildest expectations of excellence, it was the folks in the kitchen who entertained us with stories and conversation, which made the evening even more memorable. 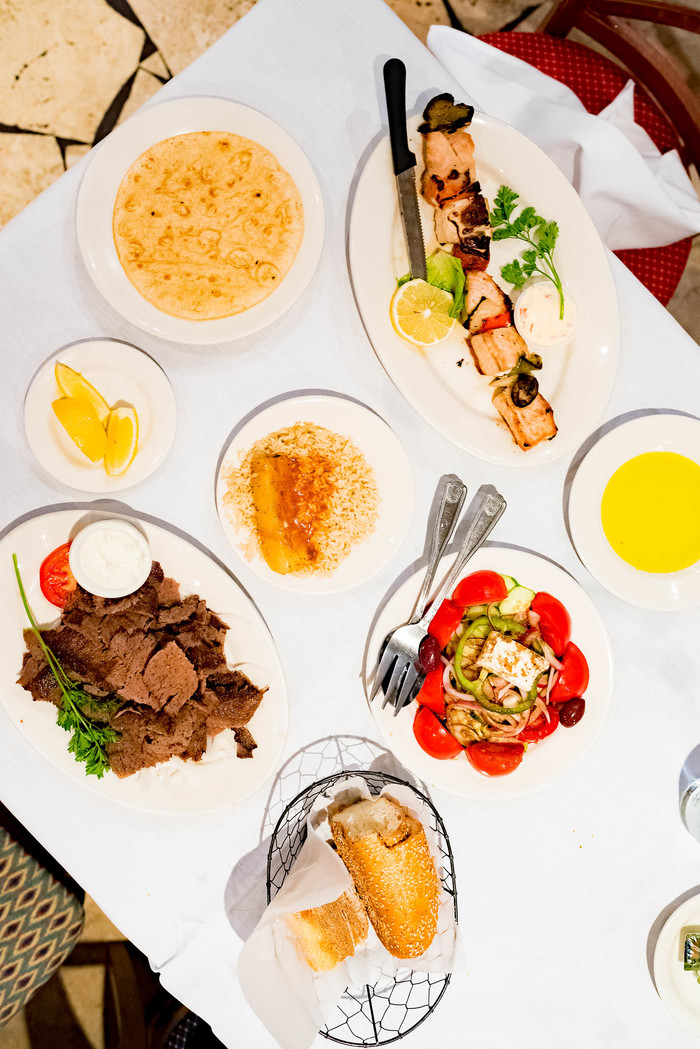 Our final day in Chicago was bound to be another food-filled experience, mixed in with some rooftops and skyscrapers. We began our morning with breakfast at Soho House, although it is a members-only club, anyone can gain access to the restaurant on the entry level.

Lunch was soon after in neighboring Greek town, at Greek Islands, one of my absolute favorite places to grub when in the windy city. Their Avgolemono soup, a combination of chicken broth, rice, and egg-lemon hearty soup is typically the only thing I eat there, along with everything from the cold and hot appetizer menus.

Following our filling breakfast/lunch marathon, we used our City Passes and rode the elevators to the top of both the Skydeck at Willis Tower (formerly the Sears Tower) and 360 Chicago at 875 North Michigan Avenue (formerly the John Hancock Center).

I’m not a massive fan of iconic name changes, but I am a fan of being up really high where the views of the buildings below blend beautifully next to hues of blue from Lake Michigan. 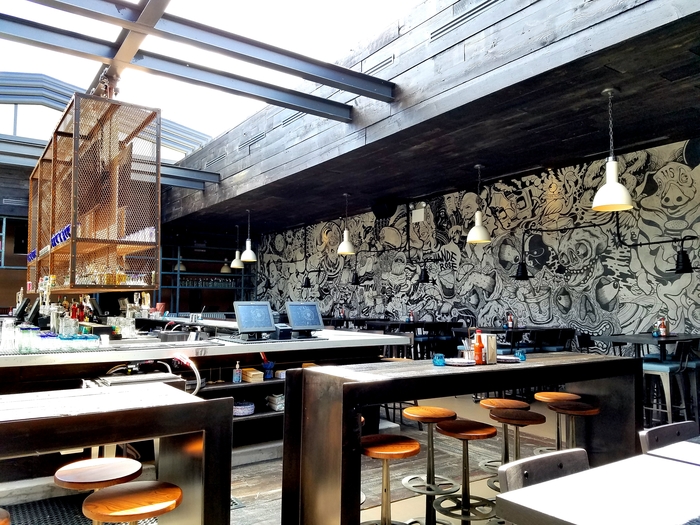 After a quick visit to Millennium Park to see the famous structures and enormous sculptures, including Cloud Gate (the bean) by Indian-born artist Sir Anish Kapoor, we headed across the street to the Chicago Athletic Association for a stop at Cindy’s, one of the best rooftop bars in the city for some liquid warmth and epic views of Millennium Park and the lake.

Back near the b, we stumbled upon Federales, another amazing restaurant bar, where we were forced to eat the delicious tamales and take shots of tequila from shot glasses made of ice, which ended with a non-negotiable ritual of attempting to throw the melting shot glass against a bell in their courtyard. I already suck at throwing, so imagine that mixed with tequila.

Dinner that evening was at Pequods Pizza, for traditional Chicago deep-dish pizza. How we managed to eat that pie is beyond me, but we did, and wellno regrets.

This time, I definitely ate my way through Chicago, and it may have partially been inspired due to the extra layers of clothing that shielded my expanding belly but kept me nice and warm.

Everyone we met kept saying the same thing to us, “You have to come back during the summer.” So, we willto eat more food.